It’s Tuesday morning and we are anchored in the bight at guess what– Cape Lookout.  What a spot.  The lighthouse at Cape Lookout is unique, white with black diamonds painted down the sides.     Cape Lookout is located about equidistant between Beaufort NC and Cape Hatteras.  Actually, to look at a chart you’d think that this was part of Cape Hatteras, which it, sort of, is.  Anyway, a nice place.

This is a very remote spot and as I write this there is only one other boat within view and they are perhaps ¾ of a mile away.

Lookout is an area of miles of shifting sand dunes and as we rounded the point yesterday I was amazed to see that the two buoys marking the approach aren’t on station at all.  If you were to round them normally, you’d run hard aground.  That’s pretty obvious on the Garmin i-pad charts but my Raymarine plotter, with older charts, shows just how much the sand has migrated over the years.   In fact, one of the floating marks is actually in about 1’ of water at low tide.  Not exactly in the right position at all.

However, after rounding and not grounding, we were greeted by a lovely view of the lighthouse in the late afternoon light. 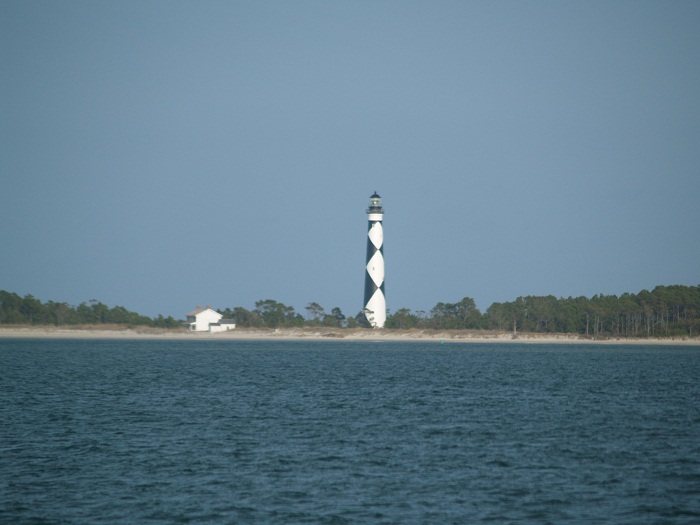 After a few days in Wrightsville Beach we left yesterday to make the run here, an ocean shot of over 75nm.  We had debated going on the inside but there is so much shoaling in the ICW along the stretch to Beaufort that we expected it would take three days to make the run because of the timing of the tides, low at mid day.  I have gone through that section twice before but the tides were high in teh middle of the day so it worked just fine.  Transiting much of NC needs to be managed that way.

We headed out of the inlet with Kismet at dawn and were greeted by a beautiful sunrise framing our friends and their boat. 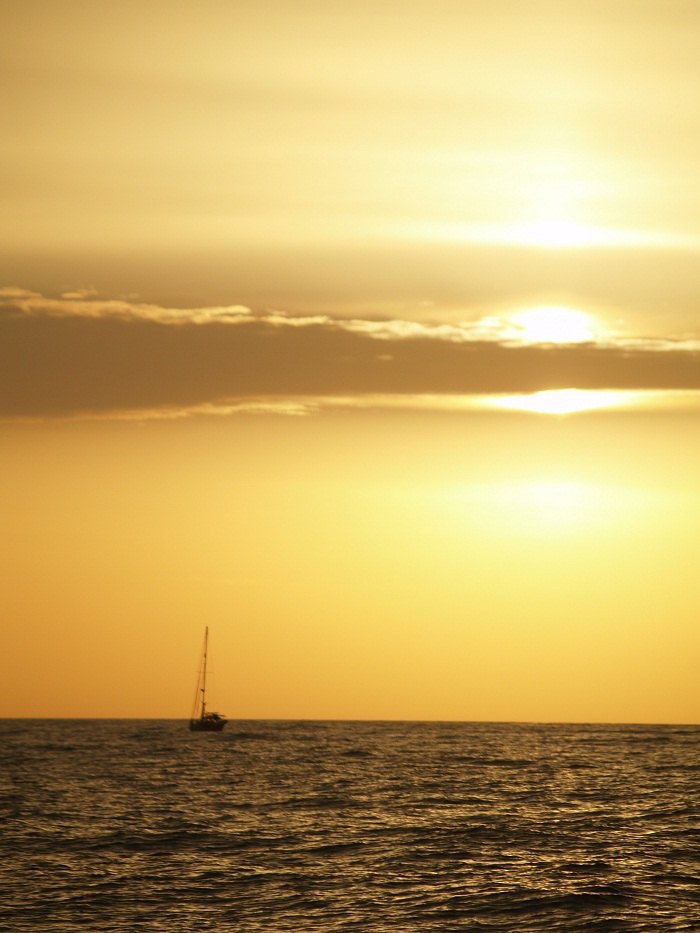 Actually, there’s was the only boat we saw for the whole day.  I guess everyone else was at work after a long Easter weekend.

By going outside we were able to make the run in a single day what would have taken three short days inside, and all during daylight.  However, it didn’t turn out to be a great day for Brenda as there was a swell coming in on the beam the entire day and there was only a light breeze on the nose which meant that there wasn’t anything to stabilize the boat.  After about 11 hours of the boat rolling from side to side in the swells, a nice breeze finally picked up, but not until we were only a few miles from our destination.  Oh well, not a lot of knitting for Brenda yesterday.

However, we were able to anchor in time to enjoy the sunset and a nice steak dinner.  A good ending after a long day.  We had decided to visit Cape Lookout as our new friends Laurie and Jim of Kismet had told us about this spot and encouraged us to visit.

So, we plan on staying here for two nights and then we’ll make the rest of the run to New Bern beginning early Thursday for a Friday arrival.  Happily, the flood up into the Beaufort area coincides nicely with our plans to make the 10 mile run to the inlet from here on Thursday morning.

This is an amazing place and while it’s only a short distance from a populated area of NC (there’s even pretty good cell coverage) and yet it looks like a spot that could easily be a thousand miles from anywhere.

This is the view of the lighthouse that greeted me at sunrise today.   After a few shots, I was even able to time the photo to coincide with the flash of the 15sec light.  Wow!  Can you say Wow first thing in the morning?  I did… 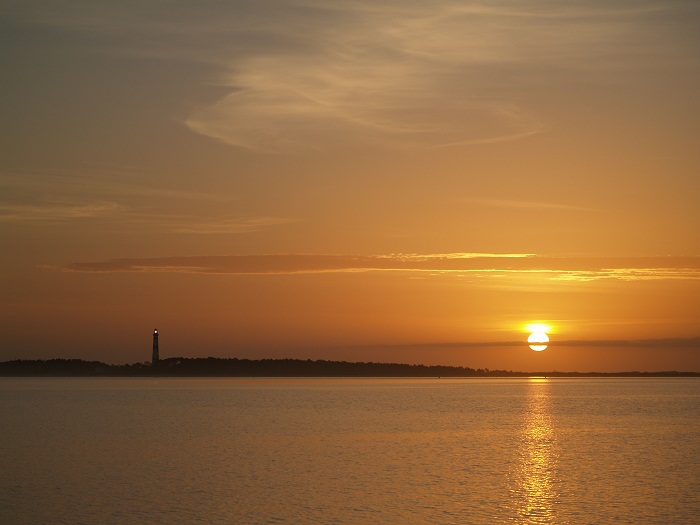 Today we’ll be heading to the beach for a walk and some shelling, something that we’ve been told is terrific here.

I am excited and yes, this truly is a great spot to “look out”…at.

2 responses to “Lookout at that Cape…Beautiful.”