Wrightsville Beach for a few days, or not.

It’s Easter morning and I have to say that it feels a bit weird to be sitting here as if it’s just any day of the year.  However, it’s blowing pretty hard and we didn’t feel like heading ashore just yet.    However, I did make fresh biscuits for breakfast so it felt a bit special.

Just in case you were wondering how our run with the current up the Cape Fear River  (Brenda just loves the name of that river) went, well wait no longer.   Here goes…

My plan was to hit Southport and head up the river at slack tide, about 2:00, two days ago.  Unfortunately, I neglected to note that the river doesn’t turn with the tide at Southport at all.  “That’s right Bob.  It’s CURRENT, not tide”  So, as we headed out into the river we began bucking a 4kt adverse current and did so ALL THE WAY up the 10 miles to our destination.   Fortunately, there was about 20kts of wind on our stern so, while the water was plenty lumpy, with wind against the current, we were able to motor-sail with the jib all the way.  In spite of our boat speed of nearly 9kts at times, we crawled up the river, against the current at a crawl, sometimes less than 4kts over the bottom.  Had the current been with us, we would have made the 10 miles in about an hour but it took us 2.5 hours instead.

Anyway, we made it, even if it took a lot longer than expected.  I guess we were just paying penance for our good run, with the current, going to Calabash the day prior.

We picked up a mooring in Carolina Beach which was a good idea as the wind blew hard overnight and we definitely felt more secure on a mooring as the wind gusts peaked at nearly 30kts.

Yesterday we made a short 10 mile run from there to Wrightsville Beach where we are now.

Along the way we only ran aground twice but that was to be expected as we passed a number of small inlets where the currents cause lots of shoaling, a particular problem here in NC.  And to make matters worse, the tide was low mid morning so we had even less water to work with.  I recall that on our run here two years ago, we had problems then too.

With all the shoaling problems to address, we passed a number of dredges, one was over 400’ long working in a major inlet.  This one was much smaller.  I was struck by just how tiny this tug pushing the dredge barge was.  I can’t imagine that it would even float without being attached to the barge. 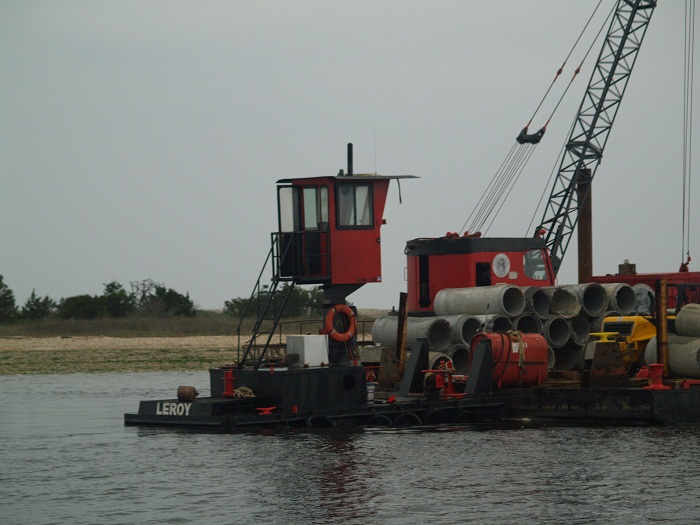 We also passed a number of shrimp boats tied up on local docks.  They look great in this picture but close up they clearly need a bit of TLC.  It’s got to be tough to compete with the low price of farm raised shrimp.  Nice lines though. 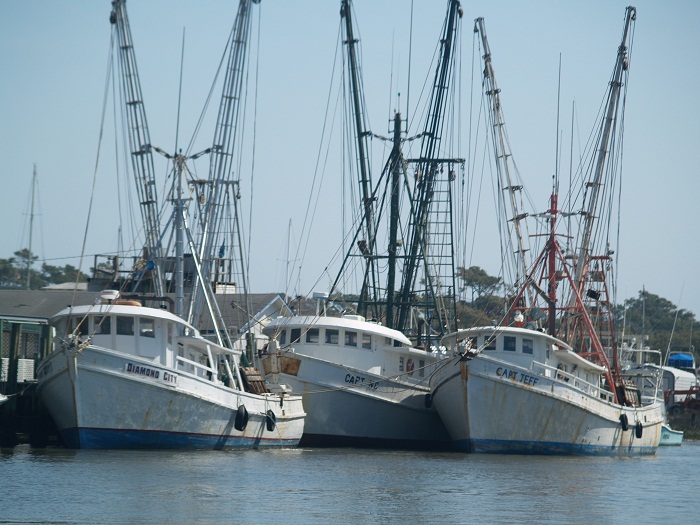 From here we have about 80 miles to Beaufort where we will head north to New Bern.  I mention this because this next section is particularly prone to shoaling and low tide is late morning each day.   This means that we will have a very tough time making distance with the lowest water happening in the middle of the day.  The best way to make it over shoals is to time our passage when high tide hits in the middle of the day, something that we were able to do in GA which made it possible to cover some pretty good distances in spite of grounding hazards.

We had a nice couple, Jim and Laurie from Kismet, over for cocktails last night and they mentioned that they planned to make the run to Beaufort offshore because of the shoaling and tide problems.    And, as the run from here if 70 miles, they planned to jump out at dusk tonight and time their arrival in Beaufort for dawn and a rising tide, which will make it easy to run up the river.

Brenda, who doesn’t really like sailing in the ocean and much less at night, seems intrigued by the idea of sailing in company with them so perhaps we’ll do it.  The only negative is that it’s pretty windy as I write this and it’s from the wrong way.   However, the winds are supposed to drop considerably this evening so perhaps we’ll give it a try.  It will be a motorboat ride anyway but much more appealing than bumping along the shoals of the ICW.   Besides, because of the timing of the tide, it would take three days on the “inside” to do what what we will be able to do in a single night on the “outside”.

I don’t know what we will do yet as it depends on what the winds do this afternoon.  If they settle down I expect that we will make the jump outside and if we do, we may very well stop at Cape Lookout National Seashore, just south of Cape Hatteras for a few days as we have heard that it’s a very beautiful area.

So, is it Wrightsville Beach for a few days or will we leave tonight?  I guess we’ll have to see what happens with the winds this afternoon to know if we are staying our going.  And you, dear reader, will have to check back to find out.

I guess that’s all for now.