It’s Thursday morning (I did have to look at the computer’s toolbar to be sure) and we are on a mooring here in Fernandina Beach FL, the most northern city in FL and our last stop before we head into GA.

Since my last post we spent a few days in St Augustine, a favorite of ours as we continue our run north.  Unfortunately, it seems that our northern run is happening faster than the warming spring weather can keep up with us.  This means that as we head north, we are slowly putting on more and more clothing.

My friend Chris was completely unsympathetic about all of this yesterday when I called and told him, as we motored into a snotty 25kts of headwind on the ICW, that I was a bit chilly. Well, he was moderately sorry for me until he asked just how cold it was. His sympathy instantly evaporated when I said “the low 70s”.   No sympathy.  “Well, it’s cloudy too”.  Nope, not buying it.  “Bob, it’s in the 20s here in CT!”   Ok perhaps.  Cold or not, it’s better here.  Yup. Such is the life of the “snowbird”, northbound or not.

Anyway, one of the fun parts of the ICW is seeing all the sights along the way.    My father used to enjoy bridges and his honor, I do to.  This bridge in Daytona is quite nice.  How about the mosaic work on each piling? 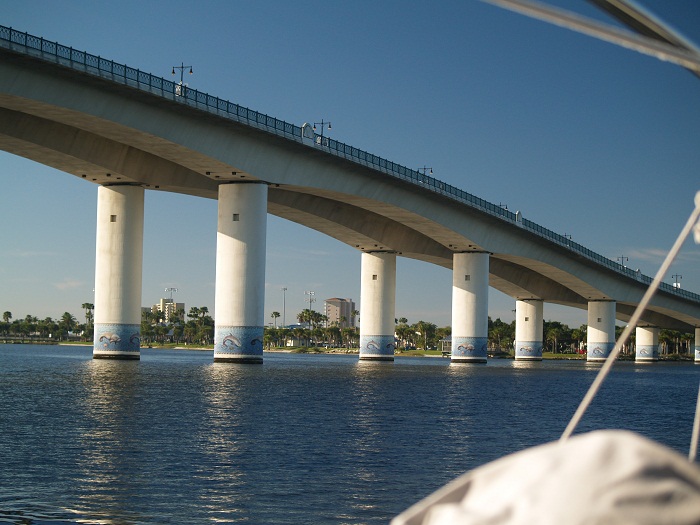 Nice detail work.  Your tax dollars at work and it would seem that they are working plenty hard. 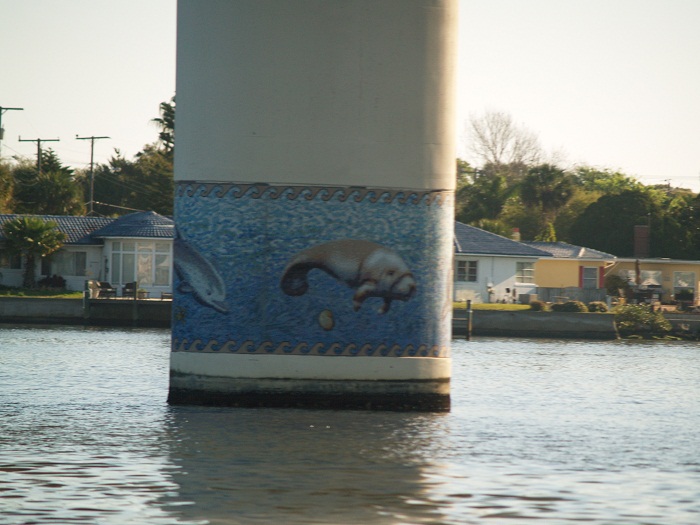 The light in St Augustine is particularly nice. 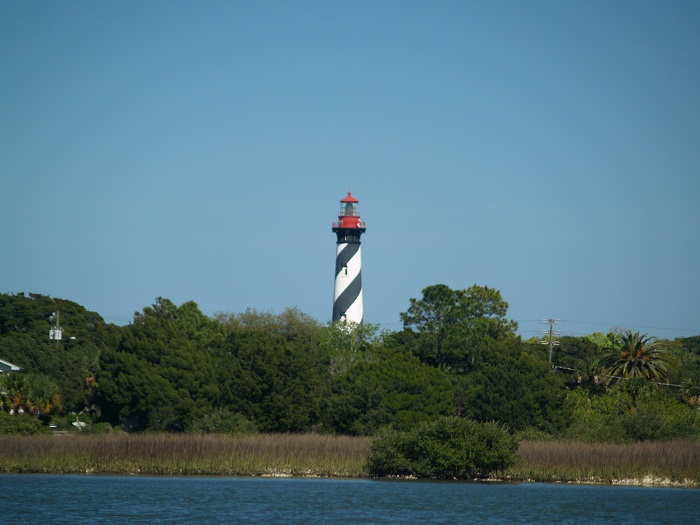 And, right on the city dock is a “real live”, well sort of a real pirate ship. 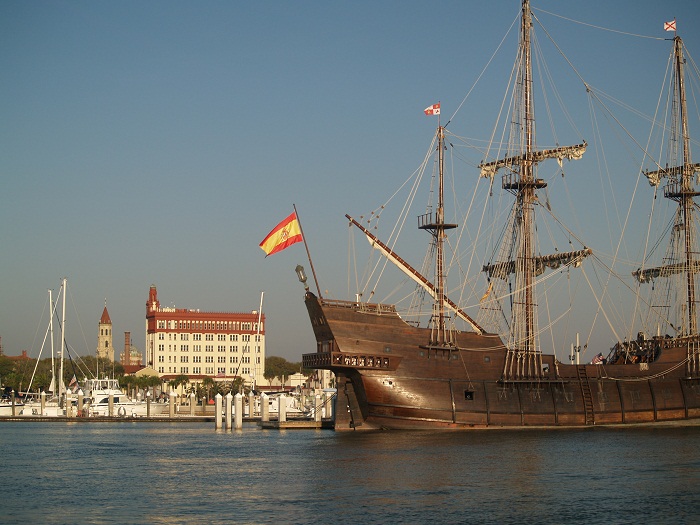 A group of Pelicans, or would that be a “murder” as in a flock of crows? 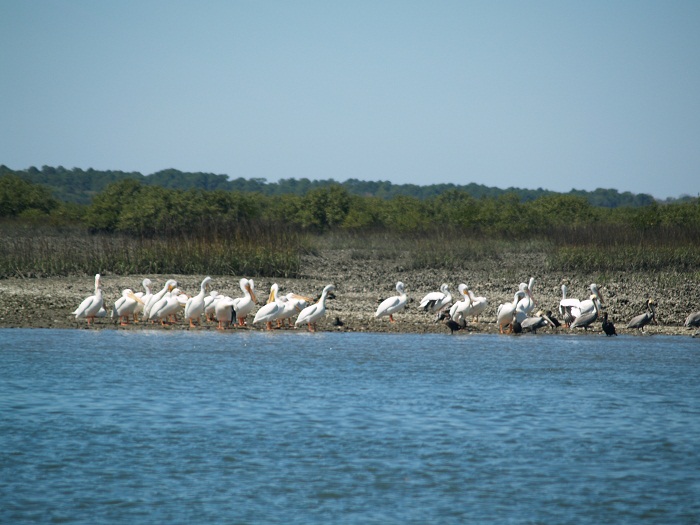 Speaking of “murder”, I wonder what happened to this guy on the sand bar? 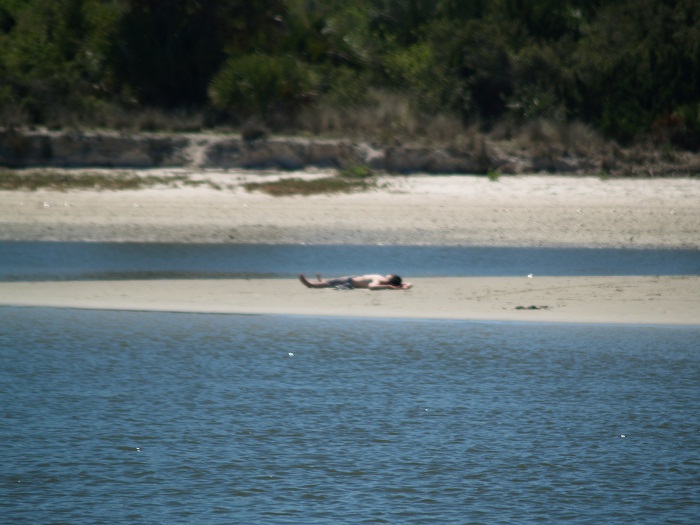 “Honest, I only left the boat for an hour.  Where  did it go?  It’s got to be here somewhere.” 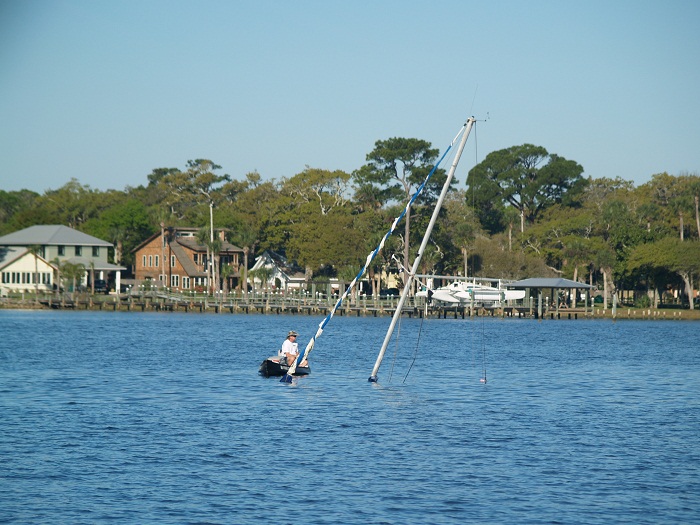 We really enjoyed seeing this house on stilts.  I wonder what the plumbing is like.  No room for a septic tank that I can see. “Kids, get out from under the house NOW,  I have to flush!” 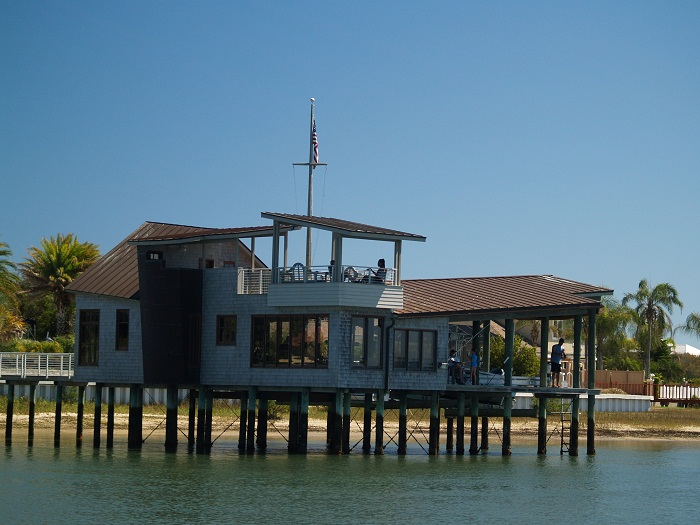 Along the St John River we passed a ship yard with an impressive number of mega-yachts in for refit.  This one is 300′ long.  Huge.  And it certainly wasn’t the only one but I think it was the largest.   The “tender” along side was over 40′ long.  There were four “gynormus” cranes that pick up such things.  I can only imagine what one does to make that sort of money. 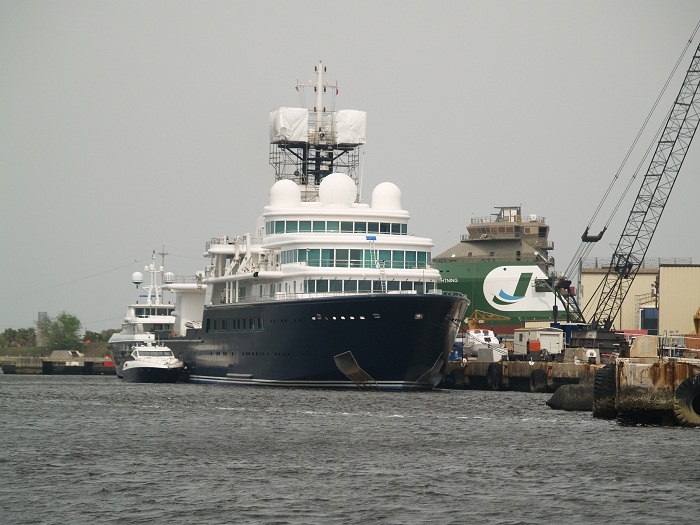 There were some commercial ships under construction.   This certainly looks like a “go anywhere” vessel.  Note the twin bow thrusters?  They are about 8′ in diameter.  Pretty tough looking vessel.  A tug, I think. 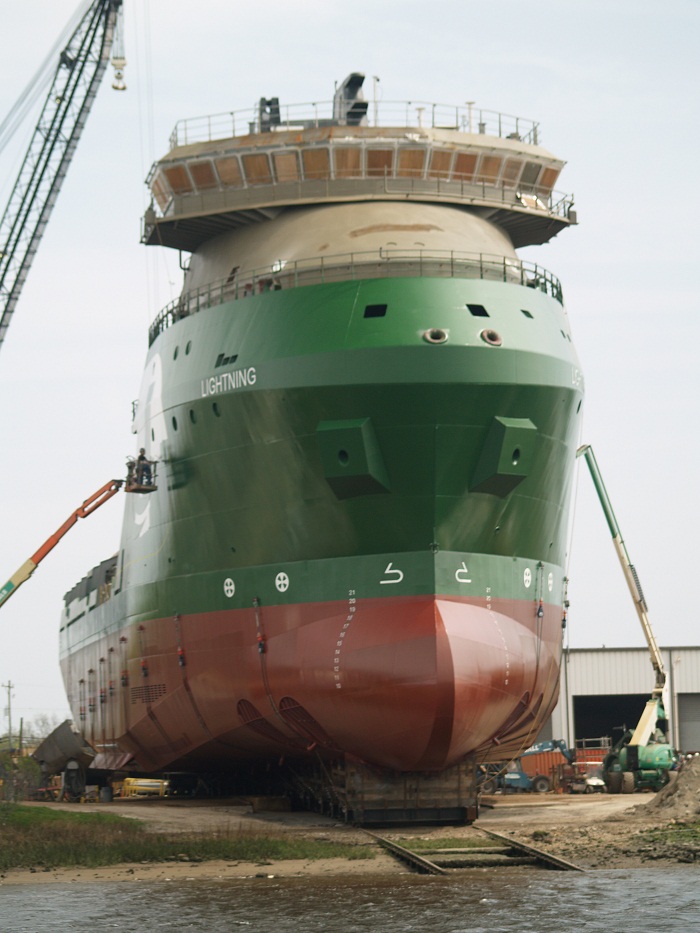 So, we’ll spend a day or so here in Fernandina as we have heard that it’s a nice spot.  I guess you’ll have to stay tuned to find out.

Oh yeah, I almost forgot.  When we were in St Augustine I saw an ocean racing boat called Kiwi Promise.  Pretty neat.

I had read about this boat but didn’t make the connection until after leaving St Augustine yesterday.  The boat was built in Maine and launched two years ago.  The owner, Stanley Paris, a guy in his 70s, planned to try and break the record set in the 80s by Dodge Morgan, aboard American Promise,  as making the fastest circumnavigation, “up hill”, that is against the prevailing winds, non stop and unassisted.    After two tries where Paris suffered major gear damage along the way, he is, once again, back in St Augustine.  It’s unclear if he will make a third attempt.   As I’ll be 60 in June, that only gives me another decade till a round-the-world trip is out of the question, I guess.   “Yeah right Bob, you’d better talk to Brenda about that.”

I won’t think about that right now…

Anyway, Dodge Morgan’s boat was very different.  You can certainly see how ocean racing yacht design has evolved since the 80s.   American Promise, as pictured here, is now owned by the US Naval Academy in Annapolis. 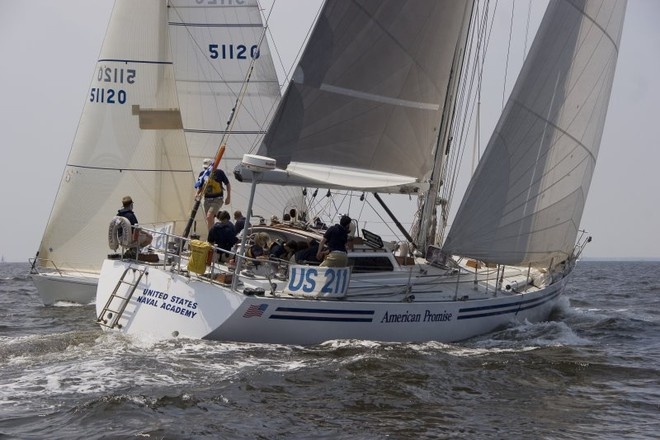 Back in 2011 Brenda and I took Pandora to a spot near Morgan’s home in Maine. It’s a beautiful place, to be sure.  I described our visit here.

Ok, now I am really done.  Of to explore lovely downtown Fernandina.  Hopefully, it won’t be too cold.  Na, not at all, for now anyway.   Let’s hope that spring can keep up with us.