USCG to Pandora, the inlet is closed. What?

It’s Sunday morning and we are anchored here in Daytona after moving Pandora about 50nm each day for the last few days.   Tomorrow we will head off to St Augustine, a favorite spot of ours.

It’s been a while since I have posted but motoring up the ICW day after day is tedious and when we get underway at first light and motor all day, I find that there really isn’t much time to do posts.  You would think that we’d have plenty of time to write as we motor up the protected waters of the ICW but the channels are often so narrow that you have to keep constant watch to be sure that you don’t run aground.   The ICW is often described as “the ditch” and that’s exactly what it is in many areas, a narrow cut dredged out of vast areas of very shallow waters that are only a few feet deep.

When we left West Palm Beach a few days ago we headed out of the Lake Worth inlet to make the 50 mile ocean run up to Ft Pierce.  The wind was pretty nice but it was a bit lumpy to start.  However, we made great time and arrived at Ft Pierce inlet around 2:30 in the afternoon, just about at slack tide when the seas in the inlet would be the calmest.

You may recall that a barge sank in the Ft Pierce inlet a while back and there are ongoing salvage operations being conducted to remove the wreck.  It’s a huge deal given the tremendous currents in the inlet and the massive size of the barge that sank.  I was concerned about navigating through the inlet with the salvage operations underway and called the US Coast Guard for instructions prior to leaving Lake Worth.  I was told that the inlet was closed that morning but that it would open around midday for transit.

Armed with the knowledge that we’d be able to get through the inlet when we arrived, we headed out for the run to Ft Pierce.  Along the way Brenda suggested that we fish with the hope of catching a tuna.  No luck on that score but we did catch a nice King Mackerel which we threw back.  I wish I had taken a picture.  Oops.

So, fast forward to our arrival at Ft Pierce inlet…  I called the Coast Guard again to get entry instructions only to be told that the inlet was closed for any traffic with greater than 5’ of draft.  “ARE YOU KIDDING ME?” Pandora draws 6’ and we were just supposed to hang out for hours waiting to transit.  They were vague about how long the closure would be in effect but that we should be able to make it in by dark.  BY DARK!!  It was only mid afternoon.  Anyway, we jogged back and forth a mile outside of the inlet, for HOURS and FINALLY were instructed to head in at 6:00.  What a pain.

Buy this time however, the wind had picked up to the high teens and the tide was in full ebb with about 3.5kts of current heading out of the inlet.  There were standing waves at the entrance that were compounded by the restriction caused by the sunken barge.   We were told to proceed between the bouys marking the wreck and the north jetty.  Sure, let’s do that.

We and two other boats entered the inlet and I have to tell you that it was the roughest ride I have ever taken aboard boat.  The waves and current bashed us all around and I wasn’t really able to control the boat.  Things were flying around down below and Brenda was not a happy camper.  Friends of ours aboard Five and Dime, long time cruisers, headed in in front of us.

As Five and Dime headed through the cut they promptly ran hard aground and were slewed wildly sideways in the current as they pounded along the bottom.  Fortunately, after a few terrifying moments, they were swept off by the current.   I couldn’t believe it.  I was so close to them that I had to do a 360 turn to avoid getting in their way as they powered into deeper water and I was afraid that I would run into the sunken barge as I turned around.  Fortunately, I was able to get back on track and continued through the inlet.

Well, we made it but I have to tell you that it was terrifying.   Exhausted, we anchored for the night in a spot near a draw bridge that we’d go through the next morning and settled down for the night.  In the wee hours the next morning, Friday the 13th, we were awakened by a strong rain squall coming through the anchorage.   I got up to check things out only to see that we were dragging our anchor, toward the bridge.  I started the engine and Brenda took the helm so I could raise and reset the anchor.   It all worked out but we came way too close to the bridge before we got control over the situation.  It was a very close call.

The problem was that I had not used quite enough scope although the anchor was well set.  When the squall hit the wind shifted 180 degrees and rose to about 30kts in a matter of moments.  This meant that the anchor was yanked out abruptly as we headed in the opposite direction and wasn’t able to reset quickly enough.   I am very careful about anchoring and making sure that it’s secure but as we were so tired after the inlet experience that I guess I didn’t do it as well as usual.

It’s been perhaps a decade since we last dragged our anchor in the middle of the night and I am very hopeful that it’s more than a decade until we do it again.

All and all, the Ft Pierce inlet experience… Not good.  I’d say that getting Brenda out of an inlet again, any time soon, is going to be tough.

So, here we are, in Daytona after a few long days motoring up the ICW.  It’s a beautiful day with a light breeze and puffy clouds overhead.

Our run in the ICW has been uneventful and we even were able to sail with our genoa for nearly a whole day and motor-sailing a good deal of the rest of the time.   It was terrific.  With a solid breeze behind us for the last few days we made good time and had a nice easy ride.

I have written about the problems with derelict boats in FL as there are boats everywhere that are just anchored and clearly are not seaworthy.   Perhaps this shot says it best.  “Will be moved in February”.  And they even suggest that you check out their video on YouTube.   Note that it’s now March and the boat is still there.  Yeah, and the check is in the mail. 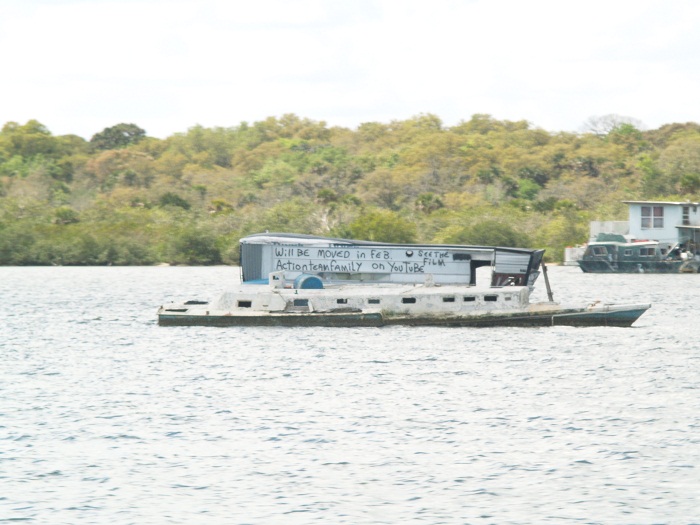 This boat has anchors out in every direction.  Plenty of crap on deck too.  Yup, derelict.  Unfortunately, many folks here in FL don’t distinguish between this and cruisers like us. 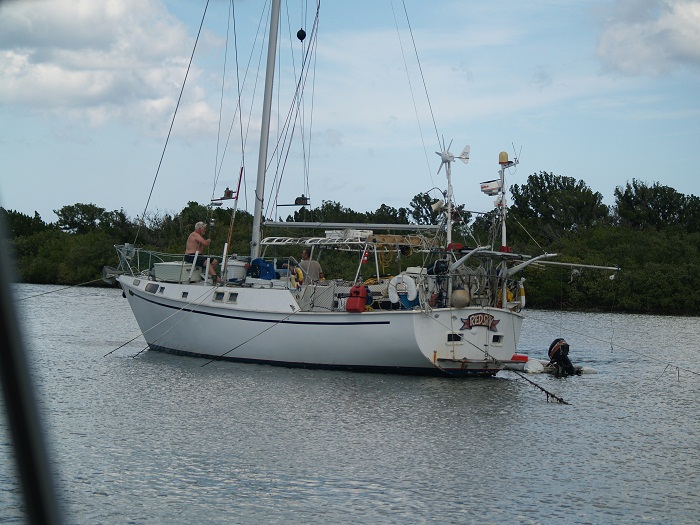 All this thinking about anchoring rights and derelict boats is getting me upset. Perhaps a soothing picture of a sunset, or is it a sunrise.  Yes, sunrise, is much more soothing. 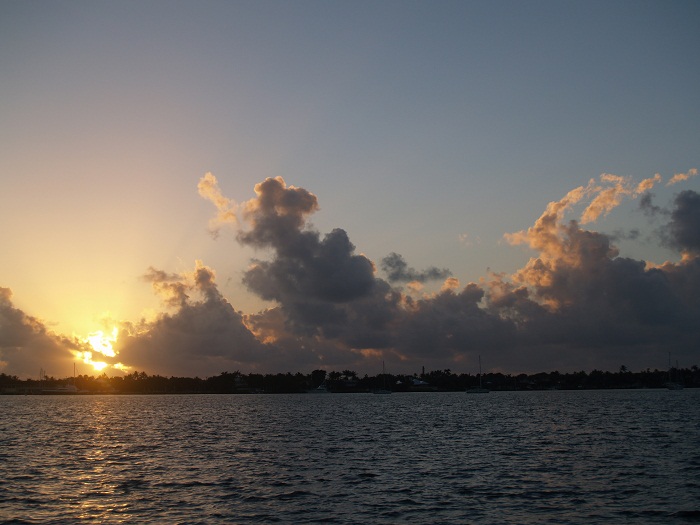 There are many tiny islands along the way but not many smaller than this one.  Check out the tent.  Pretty private. 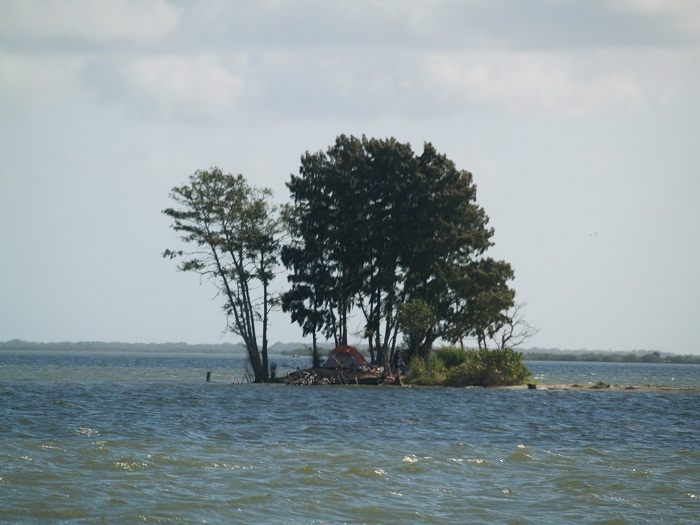 So, today we’ll spend some time ashore here in Daytona.  More to come about that.

I’d better get going or I’ll have to write about not going ashore because I took too much time writing this post.