Pikesville It’s Wednesday morning here in Marathon and, not surprisingly, it’s plenty warm and sunny.  It seems that the unseasonably cool weather that we were facing a few weeks ago has given way to tropical temperatures and I have to say that it’s not hard to take for us snowbirds.

McKeesport Even though we are now beginning to sweat a bit about our plans to get Pandora north to North Carolina where she will stay while she’s on the market,  we are feeling pretty dug in here in the Keys.  I can’t say that I prefer it to the Bahamas as it just isn’t the crystal clear perfect blue water that we love.  However, it is good to be in easy touch with family.

Our boys are both pretty busy with Christopher headed of to San Francisco for a few months as he works on starting a business and Rob, on top of a grueling work travel schedule, is planning a wedding. And anyone who’s planned one, knows that they tend to take a life of their own.

On top of that, my mother has been in the hospital and we decided to move her into a more permanent nursing home from her assisted living apartment.    One way or the other, there’s plenty going on so it’s good to be within easy, and affordable, cell range, something that’s  we never have in the Bahamas.

So, our thoughts turn north even though we have nearly 6 weeks till our April 15th deadline when we have to head off to a friend’s son’s wedding.  One way or the other, lots of fun stuff to plan for and around.  And, on top of it all we will have to catch a weather window  soon to get back to the Ft Lauderdale area and north to the Carolinas, about 800 miles north from Marathon.

So, enough about what’s happening next, how about yesterday?

Yesterday we saw turtles, lots of turtles.  It was great.  We visited the Turtle Hospital, a short walk from the City Marina and got a tour from one of the staff.  This “hospital” is a sanctuary for seaturtles that have been injured in some way, by boat strikes, cold water standings or other problems.  They do what they can to rehabilitate injured animals and, if possible, return them to the wild.

It’s a fascinating place and it’s clear that the staff is dedicated to doing what they can to protect marine turtles of all kind.   Interestingly, there are only five species of marine turtles worldwide, something that I had never thought about it but assumed that there were many more.

I won’t go into too much detail except to say that it was a fascinating tour which included a lecture as well as an opportunity to see and even feed live turtles.

By far the most abundant type in the wild is the Green Turtle and there were plenty of them to see.  They are called “green” as their meat is that color.  They are vegetarians and we each were given an opportunity to feed them lettuce and green pepper.  They were quite beautiful.   We have seen many of these while sailing but it was great to see them up close. 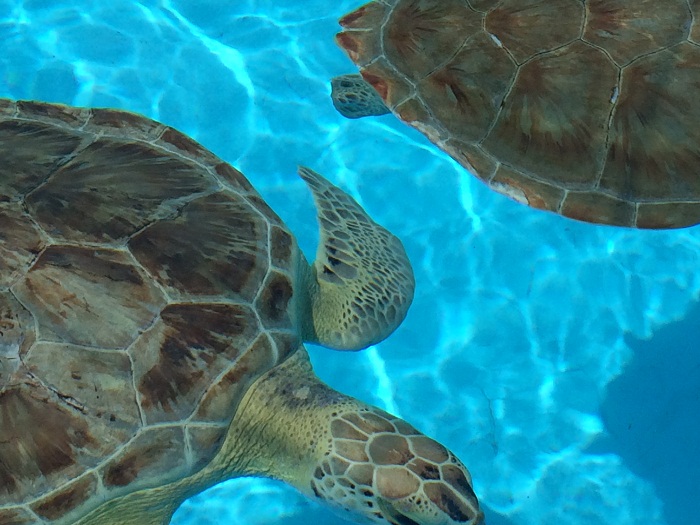 It was also interesting to see the color variation, even among the same species.   Some were not as brightly colored. 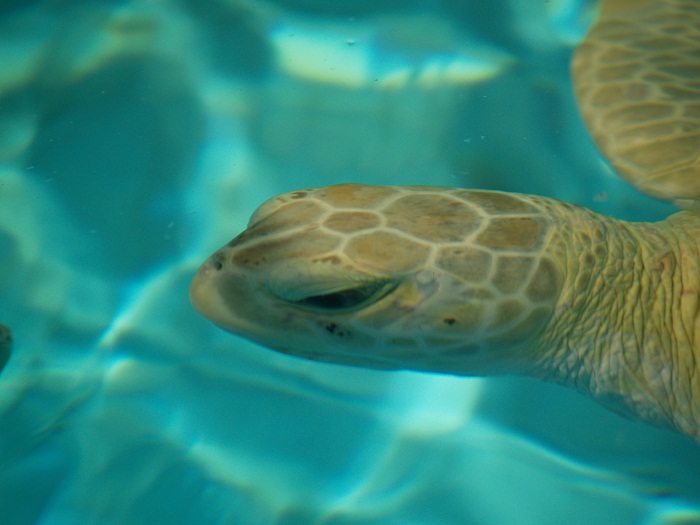 Most were more juvenile, less than two feet long but there was one hatchling there.  Very cute. 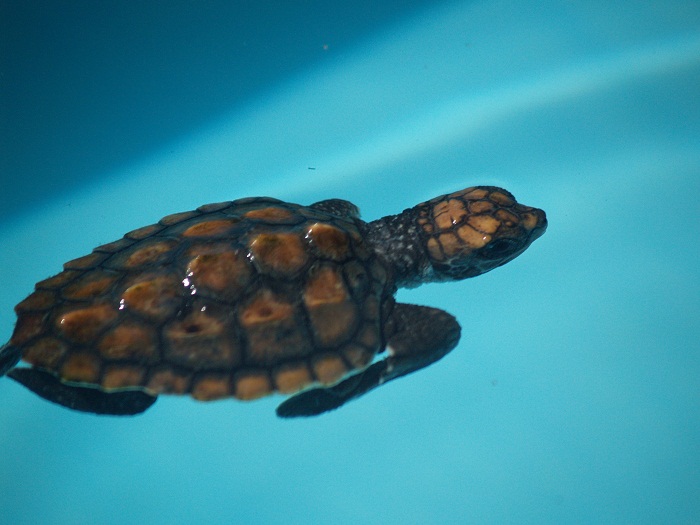 It seems that some turtles hatch on the beaches and get confused by lights from shore and end up walking toward land instead of heading out to sea.  Baby turtles spend their youth in the “Sargasso sea” about 6o miles east of Florida and don’t come back into coastal waters until they are larger and can defend themselves.  As you can imagine, the fatality rate of tiny hatchlings making their way from the beach and 60 miles out to sea is very high.

There was a pretty good group on the tour and we were each able to feed the turtles, who loved that, as we surrounded one of the tanks.  Here’s Brenda doing her part with enthusiastic turtles each trying to get their fair share. 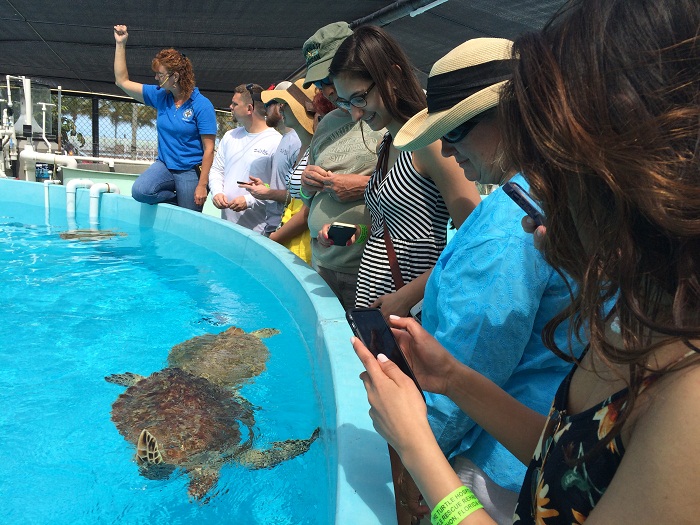 The markings on their heads and shells is quite beautiful. 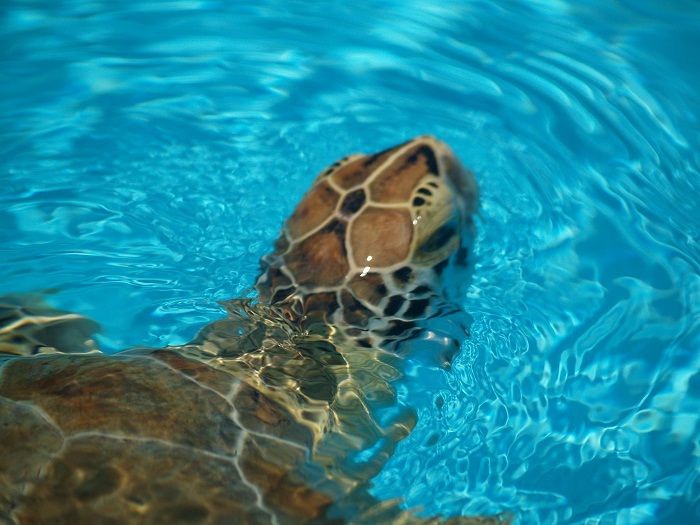 It was also interesting to see some of the very large iquanas that lived on the property.  This guy was clearly a dominant male and seemed pretty sure of himself. 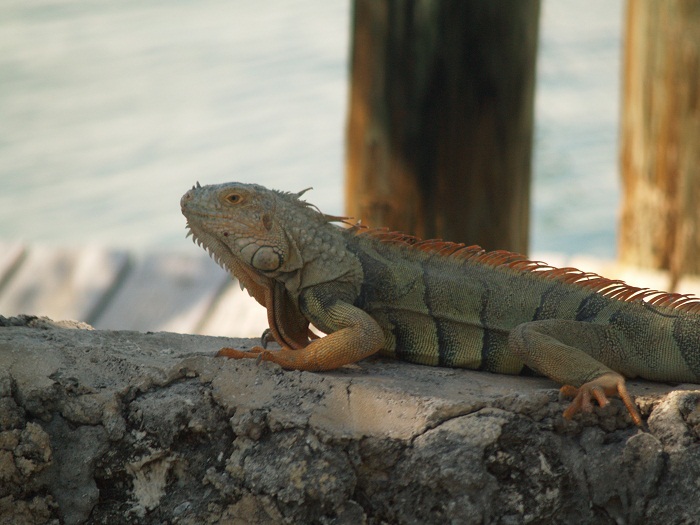 They do great work at the “hospital” and are doing a good job of getting the word out to visitors about saving these wonderful creatures.

Speaking of “locals”, I have mentioned the number of cruisers that hang out here in Marathon.  How about this shot of the dinghy dock, one of two at the city marina.  This will give you a pretty good idea of just how many cruisers are here.  And, this is only one of the docks and these are only the dinks that are ashore at any given time. 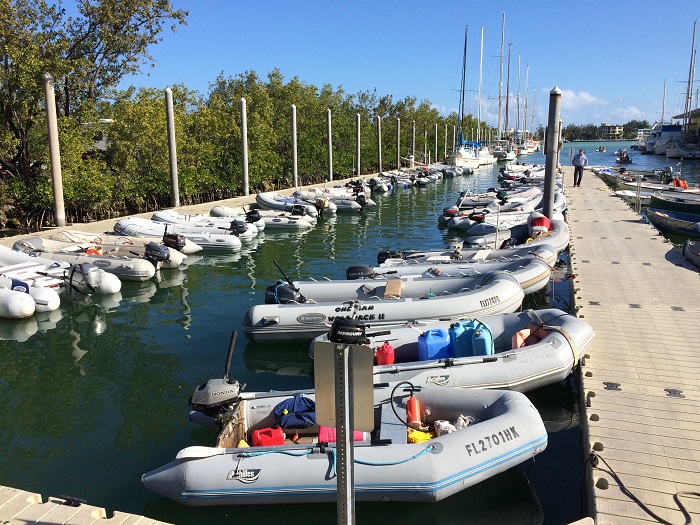 It’s amazing just how many boats there are, and they never leave.

Interestingly, I got a call from a friend last evening, as Brenda and I were watching the sunset, who wanted to tell me that while we were good friends he wasn’t thinking good thoughts about me at that particular moment as he slogged his way through an ice storm on his way home from work.

Nope, no ice here except in my G&T but I guess I’ll leave it at that as I have some errands to run and want to be sure that I am able to get a spot on the dock without pushing aside one of those pesky dinks.   Just like the “turtle hospital” this place is looking a lot like “senior rehab” for all of us “snowbirds”.