Marathon, home of the Bahamas wannabees

It’s Saturday morning and we are anchored in a mangrove creek off of Boot Key Harbor, Marathon, in the Florida Keys.  The weather for the last few weeks has been pretty crazy, like the weather up north, but in a Florida Keys sort of way.

That is to say that it’s been unseasonably cold, try 40s in the morning and 60s during the day.  However, before you start yelling “Bob, you are such a weenie, try Zero degrees and see how you like it.”, remember that while we are blessed with heat aboard Pandora, we are really exposed to the weather and….well, just trust me, it’s pretty cold out on the water and way colder than we were expecting.

Anyway, think what you will, but to be less than 100 miles from Cuba and feeling the 40s is not typical.  Regrettably, it’s just not tropical at all.

Our two day run down here from Miami was quite a snorter.    The wind was on the beam and solidly in the 20s with gusts into the low 30s.   Yes, that’s a lot of wind but Pandora handled it pretty well with just the jib.  For much of the time we were booking along at 7-8 knots, a pretty respectable speed with just a small jib up.   Our route took us down the Hawk Channel , which runs down the ocean side of the keys and is protected by a long barrier reef to keep out the ocean swells.   I can’t say that I enjoyed sailing hard for two days but we got here and to wait for more settled weather would have kept us in Miami for another week, which we didn’t want to do.

Marathon is the best harbor in the Keys (actually, it’s the only protected one) and it’s the spot where many cruisers spend their winters and some wait for a “weather window” to head out to the Bahamas.  The city has put in about 250 moorings so the harbor is completely full with very little anchoring room available.  Don’t get me wrong, I’d be happy to pay the $20 per day fee, less if you book for a week or month, but EVERY mooring is occupied and there’s a waiting list with 30 ahead of us so our only option was to head into the mangroves and anchor there along with others in the same predicament until a mooring spot opens up for us.   And, I have heard from some folks who spent two weeks here and only a dozen boats left during that time. I have to say that’s not encouraging.

As an interesting aside, Marathon is the home to “radio Cuba” that has been operated by the Uncle Sam since the 60s, broadcasting “news” to Cuba.  There are three enormous radio antennas nearby blasting their signal to Cuba only to be “jammed” by our buddy Fidel.  We broadcast, they jam and that’s the way it’s been for some 50 years.  Such is the subtle thinking of government. The signal is so strong that the LED lights in our cabin have been flickering, even if they are turned off, and our inverter has even been turning itself on all by itself because of the strong radio signals.  I have also noticed that my SSB long range radio has terrible reception as the signal from the antennas just overwhelms it.  There is so much power from the station that the signal bleeds over onto the SSB frequencies and I can hear the station itself on Pandora.   Bummer that I don’t speak Spanish.

This is an interesting place, that’s for sure.  They even have a Home Depot.

And being in the mangroves is fine, while there is wind.  The mangroves are very pretty but when the wind drops, watch out, as the no-see-ums come out for blood.  Fortunately, or not, the wind has been honking so bugs haven’t been a problem.  Oddly, while the moorings are only $20 a day, you actually have to pay $22 a day to dock your dink at the city marina if you don’t take a mooring.  I guess that’s to keep out the derelict boats that hang around in the few anchoring spots and mess up the harbor.

While it’s been pretty cold for the last week, it looks like we are heading into a warm spell which will be great as our son Rob is going to visit us for a few days on Tuesday.   We are also going to visit our friends Port and Cathy at their home nearby.  That will be fun.

With more moderate weather forecast for the coming week, it’s quite possible that many folks will clear out of the harbor and make a run for the Bahamas which will free up some moorings, 31 I hope.

The creek that we are anchored in is used by local fishing boats that take it out to the ocean to fish so we have to be sure and stay out of the channel.   This means that we dropped our anchor and run lines and tie them to the mangrove trunks.  This is actually easier than it sounds and once we are firmly tied to the mangrove trees and anchored, we just winch ourselves into position.  It’s pretty neat and allows for many boats to be tied up along the mangroves in a tidy row.  Here’s what Pandora looks like in her spot. 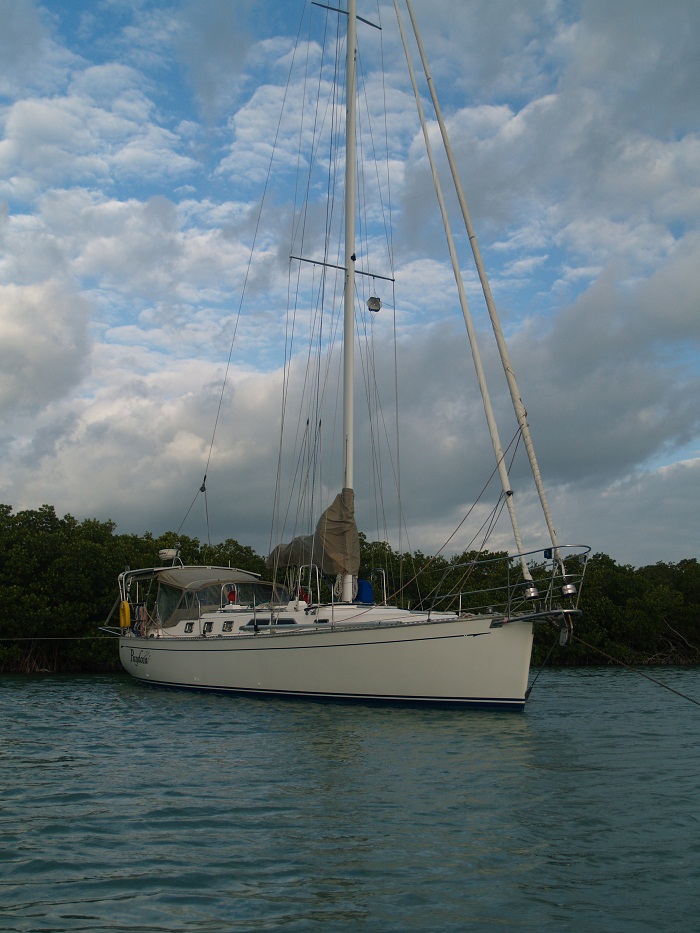 As you can see, it’s not a long trip for the bugs to visit Pandora for a snack. Wind or not, as I write this  I can’t help feeling like I am being bitten.  As it’s still windy and the boat is all closed up, it must be my imagination.  Itch, itch, scratch…  I won’t think about that for now.

How about a panorama in the early morning light?

Anyway, there is also a very healthy local manatee population.  This fellow had to have been a good ten feet long going nowhere in a hurry. 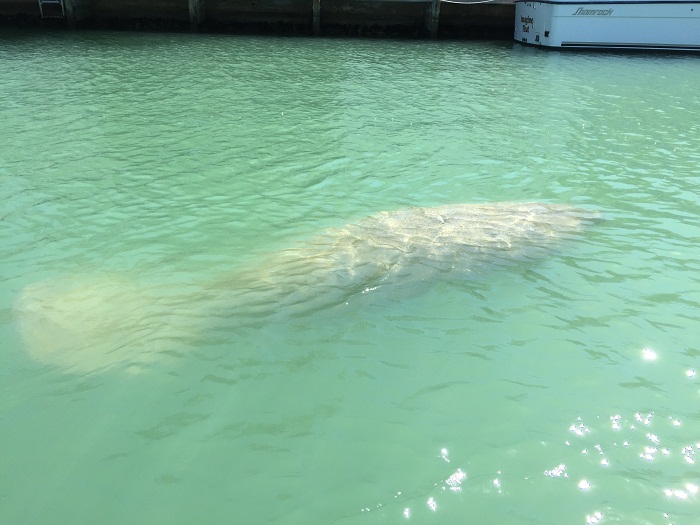 So, for now, here we are snuggled against the mangroves thinking about the no-see-ums while they wait for a lull in the wind to come over to Pandora for dinner.

Let’s hope that lots of boats head over to the Bahamas soon as I know that’s where they wannabee.