Home has cold, we have wind. Wind is better than cold!

It’s Thursday morning and it’s blowing like stink here in Key Largo.   The GRIB files that we download each day that provide predictions on wind were right on when they said that it would be fairly peaceful overnight but that the wind would abruptly pipe up to the high 20s around 04:00 today.  It did.  Long term forecasts of wind aren’t of much value but when you get within 24-48 hours they are pretty accurate.

We have decided to stick here for a few more hours and see if things moderate a bit but as we’d like to be in Marathon by Friday evening as the wind will then clock to the east which will make it quite uncomfortable for any areas exposed from that direction, which this entire area is.

Yesterday we had a very nice run down from No Name harbor near Miami as the wind was quite variable going from the high teens to the mid 20s but as it was never forward of the beam, we were able to make good time under jib or genoa alone.

Today we are hoping that things will calm down a bit mid morning so we can head out for the 40 mile run to Marathon.  Having said that, we really don’t particularly want to sail in winds piping up to the low 30s.  That would be annoying.

When we were leaving Miami a few days ago, Brenda snapped some great photos of the skyline as we motored away.  It’s amazing to see this many buildings crammed into such a small space and that there is enough money in the world to pay for them.  Pretty dramatic view. 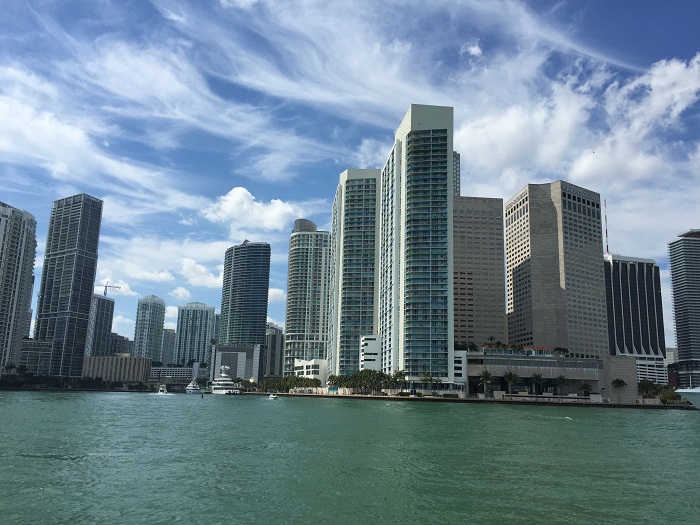 In lower Biscayne Bay there are still a few homes in what is known as “stiltsville”, a collection of rough homes, some from the 1930s, on, no surprise “stilts”.   There used to be many more but only those “grandfathered” are there now.  It seems that if they are badly damaged in a storm, they can’t be rebuilt.  They look so remote out on the horizon.  They have an interesting and very colorful history as described here. 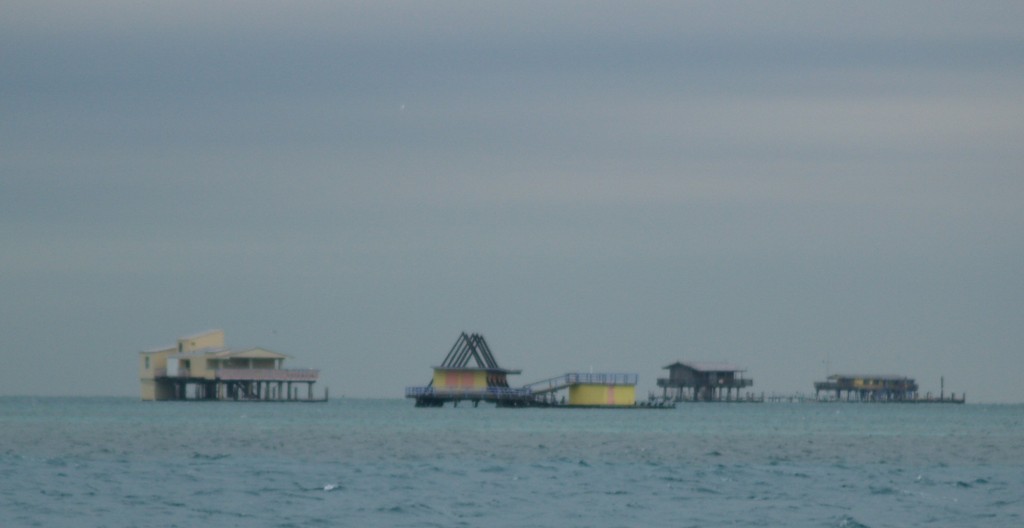 As we made our way the 45 miles to Key Largo we were passed by a number of large motoryachts, probably on their way Key West.  One in particular was a standout, this lovely old Trumpy.  Very elegant. 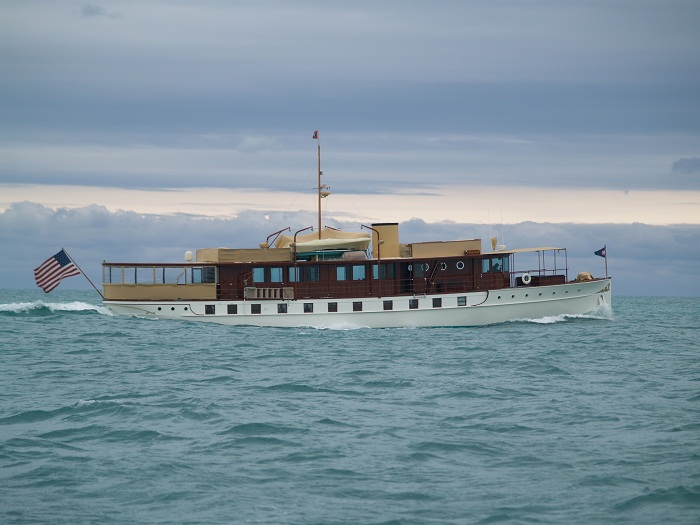 I have to say that it was pretty tough to get our anchor to hold yesterday when we arrived here in Key Largo.  Our plan was to anchor just outside of the harbor entrance in the lee of the island.  As the bottom here is all covered with grass, we had a tough time getting our Rockna anchor to penetrate the bottom and hold well.

After a few tries, we found a sand patch and dropped the hook there.  While we were able to get the anchor to stick the first time, it wasn’t in enough to make me confortable knowing that the wind was going to pipe up today.  The last thing I wanted to have happen would be to drag in the middle of the night.  Well, it did get plenty windy and it held.  It just shows that properly backing down on the anchor to be sure that it’s secure is a good habit to get into.

After anchoring we decided to head ashore for dinner and on the way we spied non-other than the African Queen, the boat from the movie of the same name.  She was out on an evening tour with some paying passengers.  I had heard that she was in Key Largo but wasn’t expecting to see her first hand.  She looks as shabby now as she did in the movie.  Pretty neat, never the less. 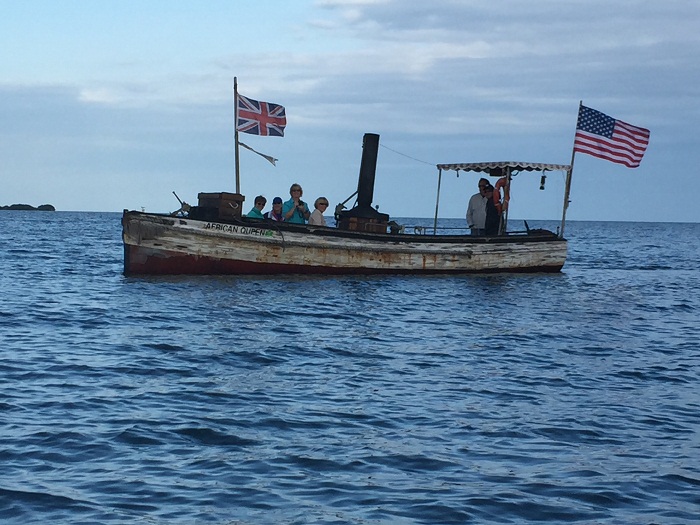 Well, it’s about time to get going on our way to Marathon.   If it proves to be too annoying with the wind we will stop part way and continue the rest of the way on Saturday.   I have heard that the mooring field in Marathon has been very busy so it’s possible that with this nasty wind that we won’t be able to get a spot and will have to anchor nearby.  I guess we will have to see.

Wind or not, I am pleased to have too much wind and temperatures in the 50s instead of single digit temperatures and snow.  Besides, cold or not, there are palm trees to remind me that this is supposed to be tropical even if it isn’t right now.