Ft Lauderdale and Miami where “mine is bigger than yours”.

It’s Thursday morning and we are anchored in a nice little harbor in Miami Beach off of Biscane Bay.  On Tuesday we sailed down the short 20 miles from Ft Lauderdale on a screaming reach in, at times, a little too screaming as it was very windy.  While the wind peaked at 30kts in gusts, the seas were pretty flat as the wind was coming off from shore and we weren’t far from the beach.  It was a fun run but I have to admit that in the big gusts it was a bit much.  However, Pandora topped out at nearly ten kts at times and rarely saw under 7kts on the entire run.

As I have mentioned in some recent posts, this area of FL is known as the “gold coast” and there is no doubt that the area lives up to it’s name.  Everywhere you look it’s clear that there is tremendous competition to prove that you are the biggest dog on the block.  Whether it’s your home on the water, your megayacht, or both, EVERYONE is working hard to make a statement that they have done well for themselves.  However, some have clearly done “weller” than others.

How about Kismet?  This boat, er… ship, is owned by Shahid Khan, a self made man from Pakistan. 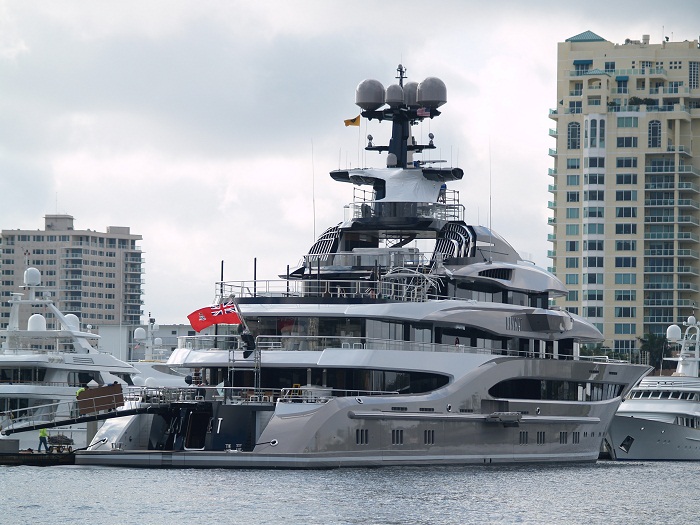 It seems that he has built a huge company Flex-N-Gate selling, among other things, and I would imagine that it’s a really-really lot of things, all of the bumpers on every Toyota, both cars and trucks, sold in the US.  He is worth something like 3.2 billion.  His 300+’ yacht was only launched in 2014 and is clearly the “queen of the fleet” in Ft Lauderdale.   Check out this link to the charter site.  Be sure to look at the slideshow.  If you wish, you can charter her for about $1,600,000 per week and I doubt that fuel is included.  However, the 18 crew are and there is plenty of space for your 12 guests.  Shahid has done well for himself.  Would you buy a car bumper from this guy?  I guess you already have. 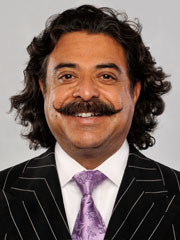 Oh yeah, he also owns the Jacksonville Jaguars pro football team, a UK soccer team and the private jets to get himself to the games.

Even if you aren’t rich enough to own sports teams, you can always get one of these.  This nifty little deal will make you feel on top of the world but be sure to wear your helmet.  It’s a sort of “jet ski” with a “jet”.   See the guy standing on the water? 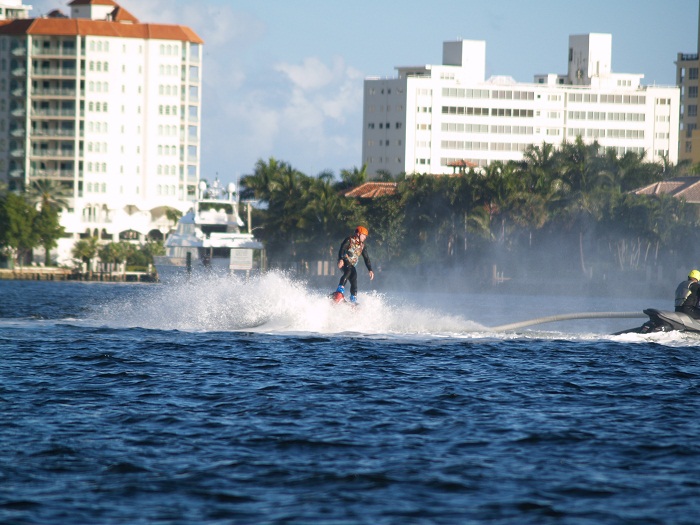 Yes, that’s pretty neat but then things get even more interesting. 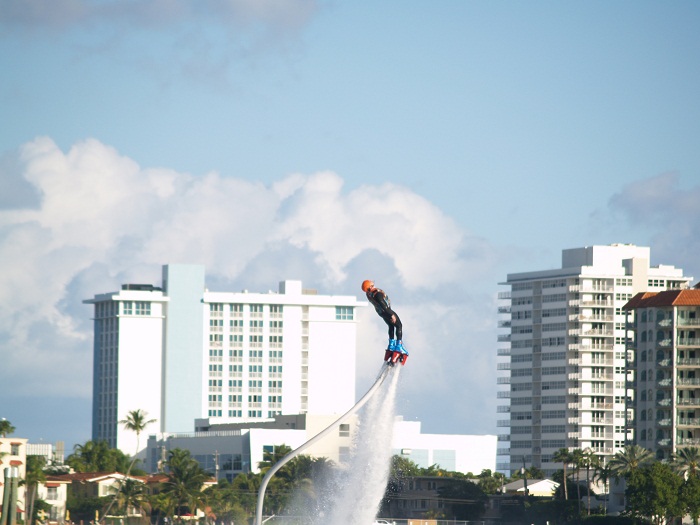 If you have the nerve you can do blink-of-a-eye “vertigo inducing” fast flips, again and again.  Way too athletic for me.  I am guessing that the “pilot” isn’t in his “upper mid 50s” like moi. 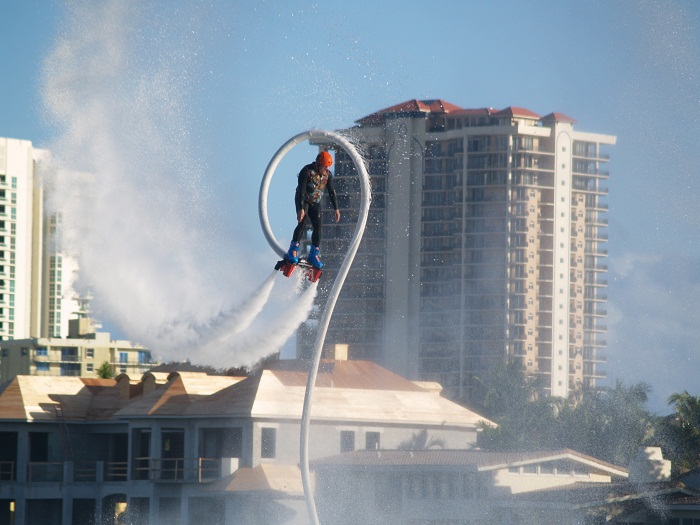 One way or the other, there is plenty going on in these parts.

On our last night in Ft Lauderdale, we were treated to a beautiful rainbow.  What a sight.  After the “flipper guy” this seemed more like our speed. 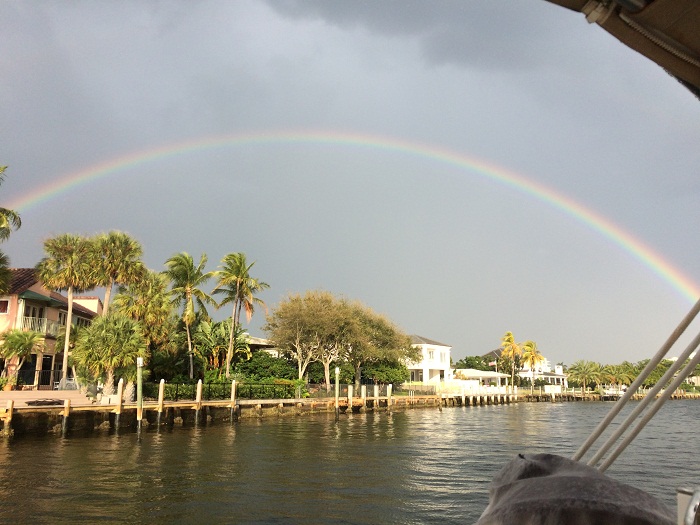 As we sailed the short distance to Miami I was struck by the amazing array of high rise buildings that line every inch of the beaches. 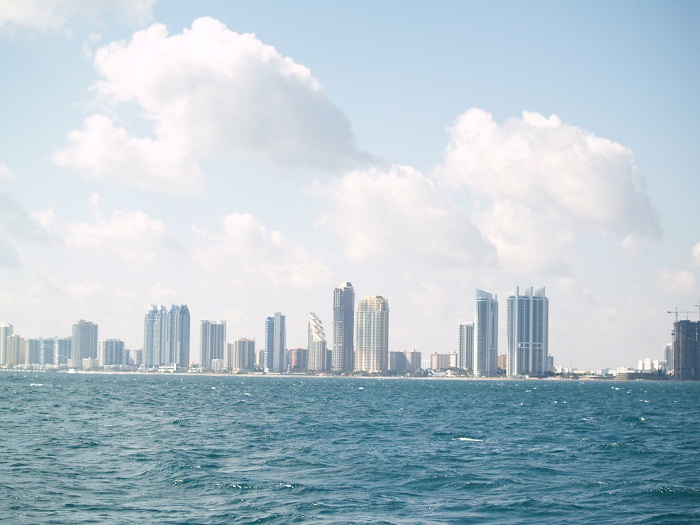 Let’s hope that a really big hurricane doesn’t hit this area any time soon and wash all of this nice stuff into the water.

Speaking of water, you can walk along the beach in Miami along a really nice promenade and we did.   I guess that they know better than to build boardwalks here as they so often get washed away in storms. 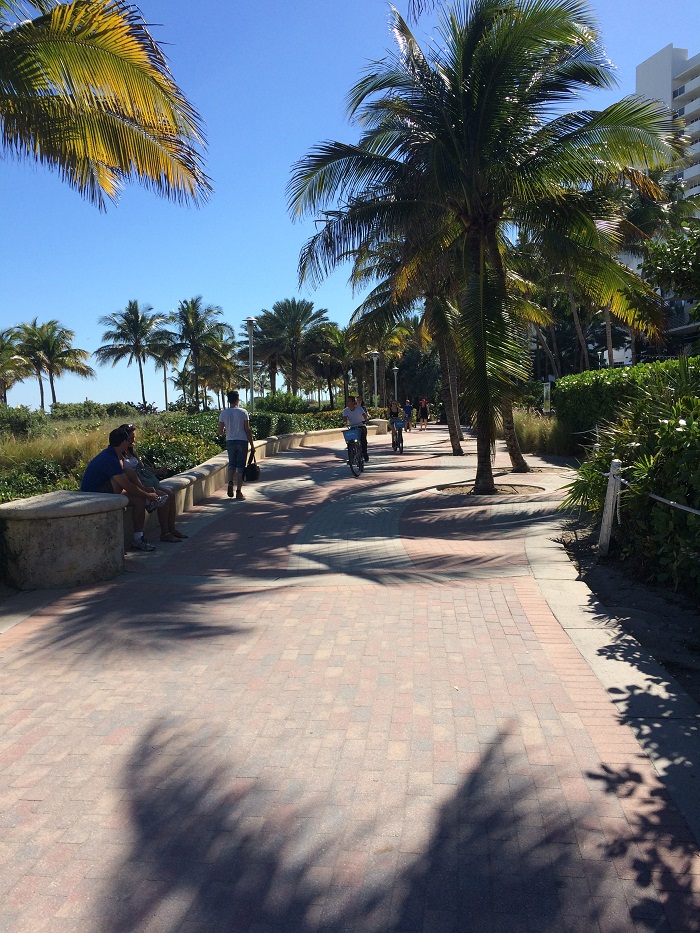 We happened on a lovely hotel on the beach, the National Hotel.  We loved the lap pool and have decided to have a long lunch at the restaurant overlooking this view on Valentine’s Day. 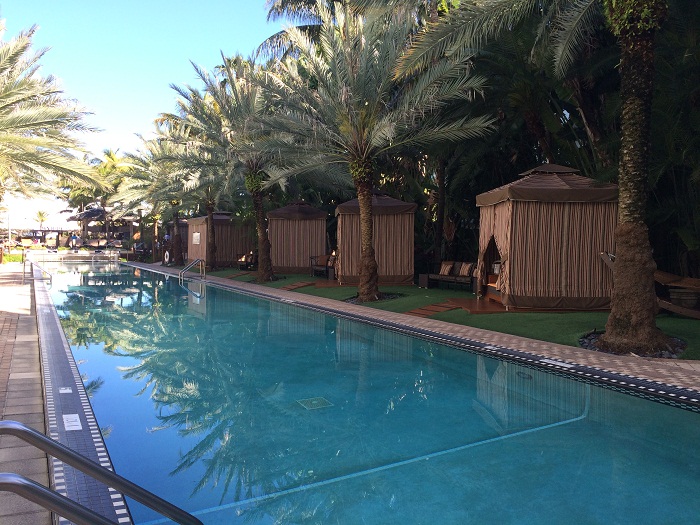 We thought that lunch would be better than dinner as schlepping back to Pandora in our little rubber dink in the dark might not be the best way to cap off a nice day.

Walking around Miami Beach is a nice way to pass the time.  We particularly liked seeing the sights along Lincoln Avenue with all of the outdoor cafes. 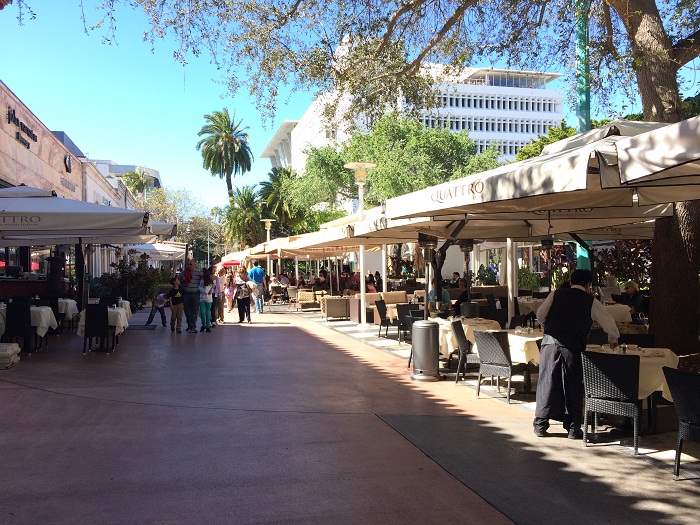 Just about everywhere you turn the landscaping is beautiful.  We did our best to peak into the private homes we walked by.  How about this beautiful landscaping? 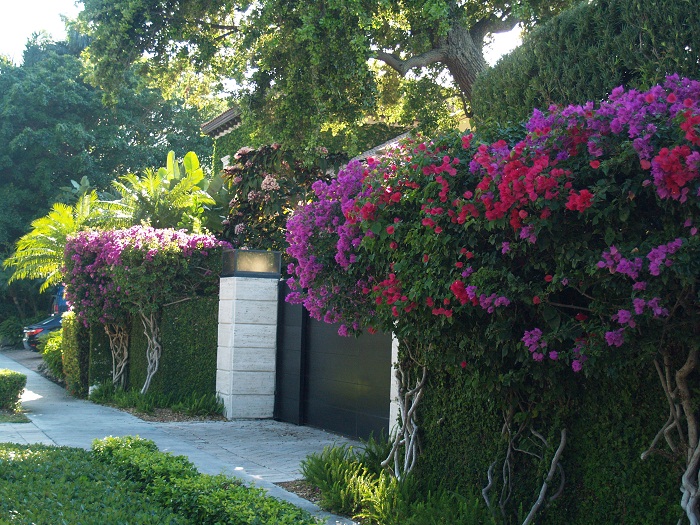 However, where there is money, there will be some that feel that they should be master of all that they survey and Miami has it’s fair share of folks that feel that way.  A particular standout is a property owner on the shores of the harbor that we are anchored in.  It seems that he isn’t happy about his “million dollar view” being maligned by nasty cruising yachts so he has anchored 25 little plastic sailboats in his part of the harbor to keep the “nasties” like us out of his view. 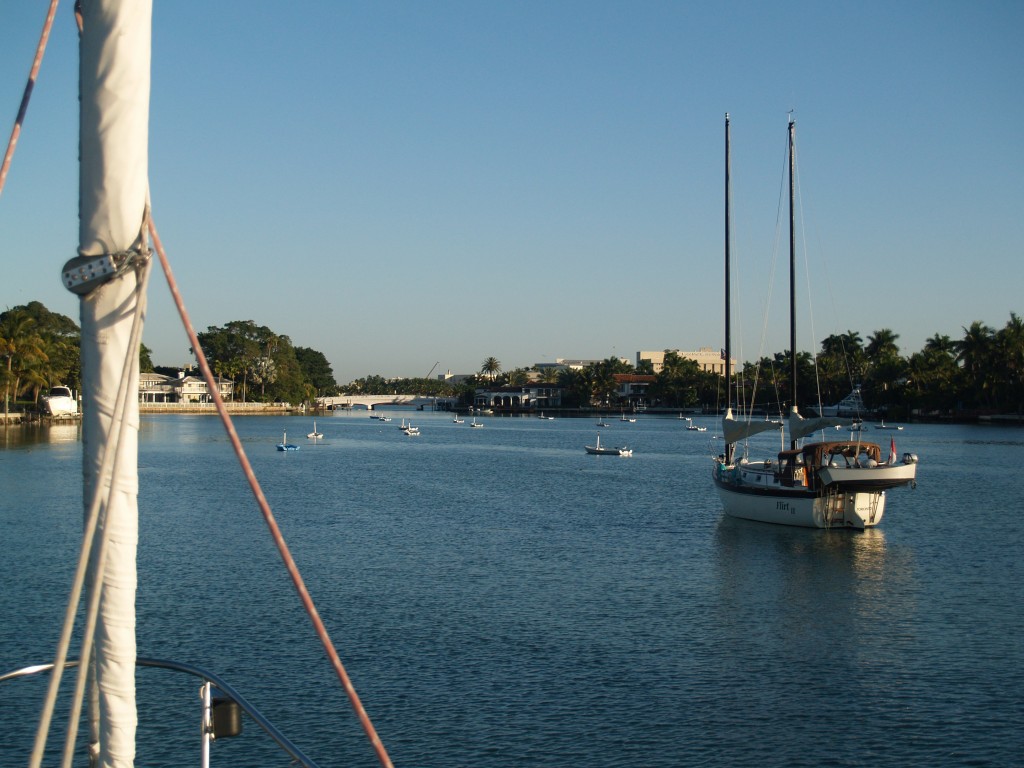 So, now he has a view of a bunch of little crappy boats covered with seagull droppings.  How scenic.  I suppose that he feels he has won in his own little way.  No accounting for taste but hey, he’s arrived and he can at least say “my fleet of little nasty sailboats and seagull droppings is bigger than yours”.  Yes, it is…