It’s Saturday morning and we are sitting in Middle River in Ft Lauderdale.  With convenient shopping nearby, including a huge mall, we are planning to stick around for a few days to see the sights and sometime early next week, we’ll head down the coast to Miami as planned.

Being here brings back memories as it was from this harbor that we crossed to the Bahamas three years ago, for the first time.   And, it was here that we got to know Bill and Maureen on Kalunamoo and Melinda and Harry on SeaShell.  Kalunamoo is in Antiqua and SeaShell in South America these days.  We are excited about seeing all of them again in June as both couples will be at our Gam in Essex.  It will be a fun reunion.   Interestingly, last evening we spoke directly with Bill and Maureen via the SSB radio.  Even though we are 1000 miles away, it sounded like they were in the next harbor.   Pretty amazing and it was a lot of fun to catch up.

As I mentioned in my last post, we experienced some really strong winds during a storm in Lake Boca a few days ago.  The National Weather Service decided it was a tornado that went through our area which would account for the conditions that we experienced.

As I think back to the experience, the wind hit so suddenly and changed direction in a moment, I guess that we must have had a near-miss with a real live twister. The ferocity of the winds was unlike anything that we have ever experienced in our 40+ years of sailing and based on the NWS judgement that it was a tornado, I will upgrade my estimates of the wind speed to say that it was officially “frigging windy”.

I won’t go into much more detail than I did in my last post except to say that I am really glad that it wasn’t any more severe than what we experienced.  I am very glad that it came and went so quickly as I don’t think that Pandora’s anchor and chain could have handled much more without something really bad happening.

Anyway, what a difference a day makes, as we now sit in a lovely harbor enjoying a sunny day. Yes, we did have a few more squalls here yesterday afternoon and overnight but they were the puny type that we are used to having.  In spite of their relatively minor gusts, we did drag a bit and woke up to find ourselves too close for comfort to a boat nearby.   As we moved and reset our anchor I did notice that the holding here isn’t as solid as it was in Boca.

All’s well that ends well and it’s nice to know that we can rely on our anchor when the going gets rally rough, well at least most of the time.

When we were walking around town yesterday, we happened on a flock of Ibis or is that Ibbisses or Ibi?  Not sure.  Anyway, they like to hang around acting like ducks in a park but I don’t think that they are looking for bits of bread.  Very interesting birds. 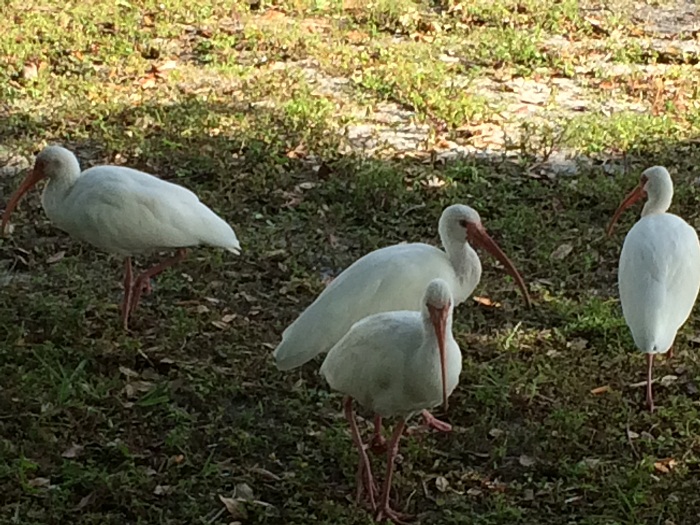 You must know by now that I enjoy sunrises and sunsets and post, perhaps too many photos on this site, but hey, here’s a nice one from yesterday morning.

Notice the group of vertical wind generators on the top of the apartment building in the distance.  This is the only place where I have seen the vertical type in action.  And, of course, in every view here in Ft Lauderdale there’s a large yacht in the picture. 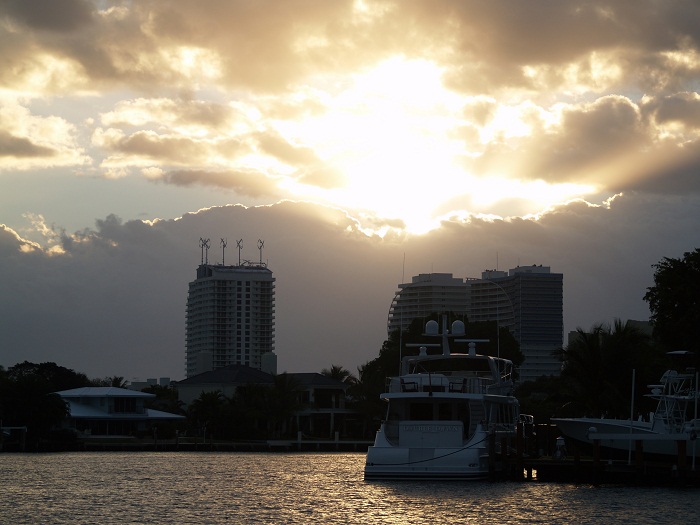 There’s no denying that we are deep into the “land of conspicuous consumption” or perhaps better, “the temple of consumption”, here in the “Gold Coast” of Florida.

Speaking of consumption, today we’ll  be heading out to lunch and go for a walk in the mall.