It’s cold here, but Pandora’s there, where it’s warm.

It’s Saturday morning and two weeks since my last post.   The problem is that there’s just not that much to write about when Pandora’s in storage and I am home in CT “on the hard”.

It’s a busy time with the holidays upon us and Christmas just around the corner. One thing for sure is that it’s a fun time of year and we are certainly busy. Yesterday was a particularly big day for Brenda as she had her gall bladder out after several months of discomfort.  The surgeon felt that with our time aboard and the fact that we are often a long way from emergency help, that it was a good idea for her to just have it out and not risk infection or worse.   The procedure went well and I am sure that she will be back on her feet very soon.   It’s amazing that such an invasive procedure, even though they call it “minimally invasive surgery” can be done on an outpatient basis and in and out in the same day.

Yes, I can’t believe that Christmas is only five days away.  Where did the year go?   A few days after Christmas, when we will head to Baltimore to visit our son Rob in Baltimore with his fiance Kandice, we’ll be heading down to South Beach Miami for a survey on Ariel, soon to be our new boat.  I wrote about this in my last post.

Even though we won’t be actually buying the boat until April, we are having her checked out now and will recheck things in April prior to final taking delivery. Unfortunately, I’ll own two boats for a while, hopefully not too long, as I won’t really be putting Pandora on the market till we end our winter cruising in late April.   As much as I don’t want to own two boats, the idea of not sailing this winter is even less appealing to me.  The logistics for the delivery of our new boat and getting Pandora where she will listed for sale are still being worked out but I am sure that we will find a way to get it all done.

For next summer, I have arranged for a mooring in Wickford RI, in the inner harbor for a few months which will give us a terrific spot to sail our new boat from to enjoy Narraganset Bay and Newport.

It also looks like we will be taking our new boat, name to be determined, south to the Caribbean next fall which will be a big step for us.  I will likely do the Salty Dawg rally which leaves from Hampton VA around November 1st .  However, the older, and more established, rally is the Caribbean 1500 is an option and the two events leave at about the same time from the same harbor.   Actually, I am not totally clear on the differences between these two rallies but will learn more soon.

One way or the other, it looks like we’ll be spending time in the Caribbean the winter of 15/16.  More to come.  I am very much looking forward to that.

With regards to this winter, our plans are coming together with the twist of having the new boat surveyed prior to relaunching Pandora in GA.  Wherever we end up, the Keys or the Bahamas, it will certainly be nice to leave this cold weather for the warmth of the tropics.

We are pretty excited about the new boat and are thinking hard about a proper name.  Yes, I know that it’s bad luck to rename a boat but then it is said that it’s good luck to pick a name with seven letters too.  I wonder if they cancel each other out?

Brenda was a classics major in college so all of our boats, pets and almost our children have had names from the classics.   Our oldest Rob would have been horrified if Brenda had had her way and we had named him Paris.   That’s almost as good as some of the kids of Hollywood Stars.  I recall Sonny and Cher named their son Chastity.  For inquiring minds… He’s now transgender and changed his name to Chas.  To be clear, it’s not clear if he changed to a she, or he to she.  Anyway, we decided that Rob was a safer name for our first born.   It was a good fight but I prevailed after all.  You’re welcome Rob.

Back to boat names.   So, if you accept the idea of a name with classical roots as a good idea that’s what we plan.  With the exception of our first which we didn’t change, our boats have been Sappho, Artemis, Electra and most recently Pandora.  Brenda’s favorite from this list for our new boat is Sappho.

Sappho was a Greek poet who lived on the island of Lesbos and wrote love poems about women and girls in particular.   I won’t go into a lot of detail, but given the view that boats are considered feminine, there is a certain symmetry to this name.   There’s one vote for Brenda. Oh yeah, it only has six letters.  Oops, not good luck, I guess.

My favorite is Artemis.  First off, it’s seven letters and she was a Greek goddess, born a twin, and was so ready to go that when she she was born she helped deliver her twin brother Apollo.  Now that’s a pretty self sufficient girl. She’s also associated with hunting, the wilderness and the natural world and especially the moon.   So, there, tides, the natural world and child birth.  I did publish an Ob/Gyn physician journal for years.  She’s also known for chastity (there’s that name again), and never married.  However, I’m not a fan on that particular point so let’s not dwell any more on chastity for the moment.

Anyway, there’s a vote for Artemis from Moi.  So, the debate goes on.  I expect that we will work through this by April and pick a name before we take delivery. More to come on that.

With regards to whether it’s Sappho or Artemis, one unique feature of the boat is that she’s composite construction, made of some pretty high-tech space-age materials, something normally associated with custom made one of a kind yachts,  and I have been reading up on some of those construction techniques.

It’s worth noting that the three Aerodyne 47s made (I was wrong as I thought that there were four) are just about the only “production” cruising boats that I have been able to find that are composite construction.  This method of manufacturing is known for very high strength as well as producing a very light structure.  The main reason that this form of construction is so unusual for cruising boats, is that it costs a great deal more than regular fiberglass building. I won’t go into much detail here but if you are interested, you can follow this link for some narrative on how it’s done.

Compared to Pandora a SAGA 43 and actually a very light boat by normal standards, the Aerodyne 47 only weighs 24,000lbs verses Pandora’s 22,000. That’s pretty amazing as the Aerodyne is 4′ longer and nearly 2 1/2′ wider at 14.5′.    I have friends with boats that are of a similar size to the Aerodyne that weigh in at over 40,000 pounds. As a result, the relative lightness of the Aerodyne makes her a pretty fast boat.

The current owner, Miles, sent me a photo the other day of his speedo showing a speed of over 14kts.  That’s pretty fast and he claims he’s done better.  We’ll see but I am encouraged.  Having sailed in company with him many times, I am painfully aware that’s she’s faster than Pandora.  And that’s saying something as Pandora can generally outrun most anything in her size range and some much larger, pretty easily.

Here’s the shot Miles sent me. 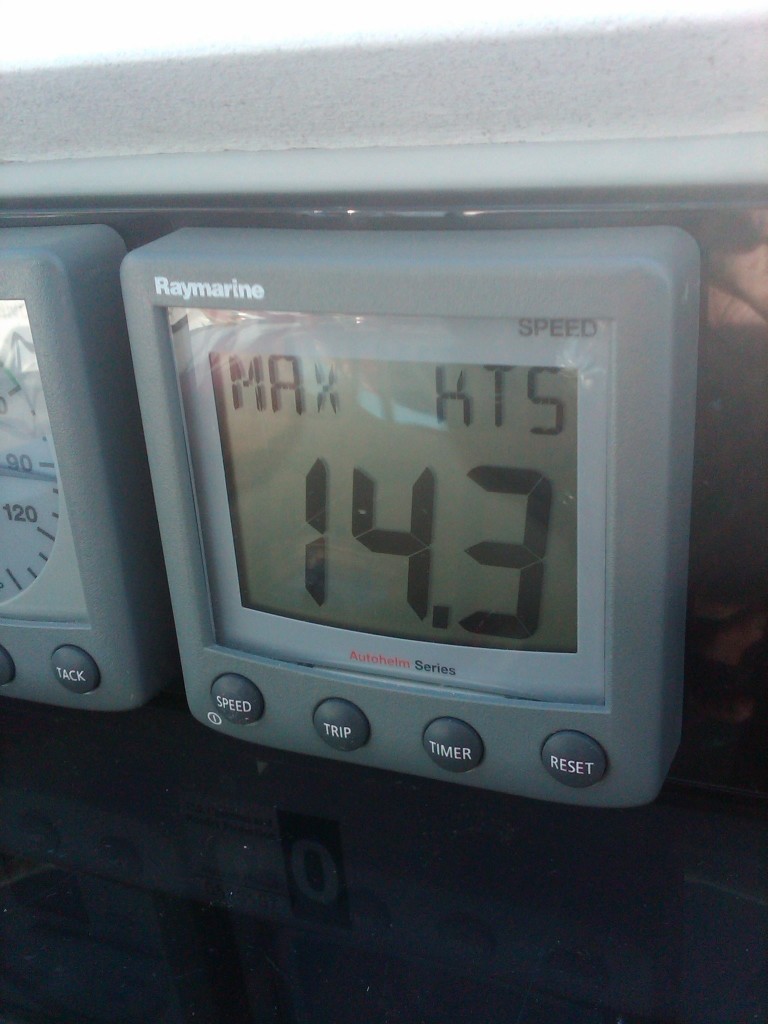 Speaking of composite boats, the Volvo Ocean Race, billed as the toughest yacht race in the world, just arrived in Abu Dhabi after rounding the Cape of Good Hope, at southern Africa.   The boats in this race are all composite construction, similar, if a bit more extreme than the Aerodyne, and are very fast and certainly much faster than 14 plus knots.   The designer of the Aerodyne line is Roger Martin who is more known for high-tech race boats. 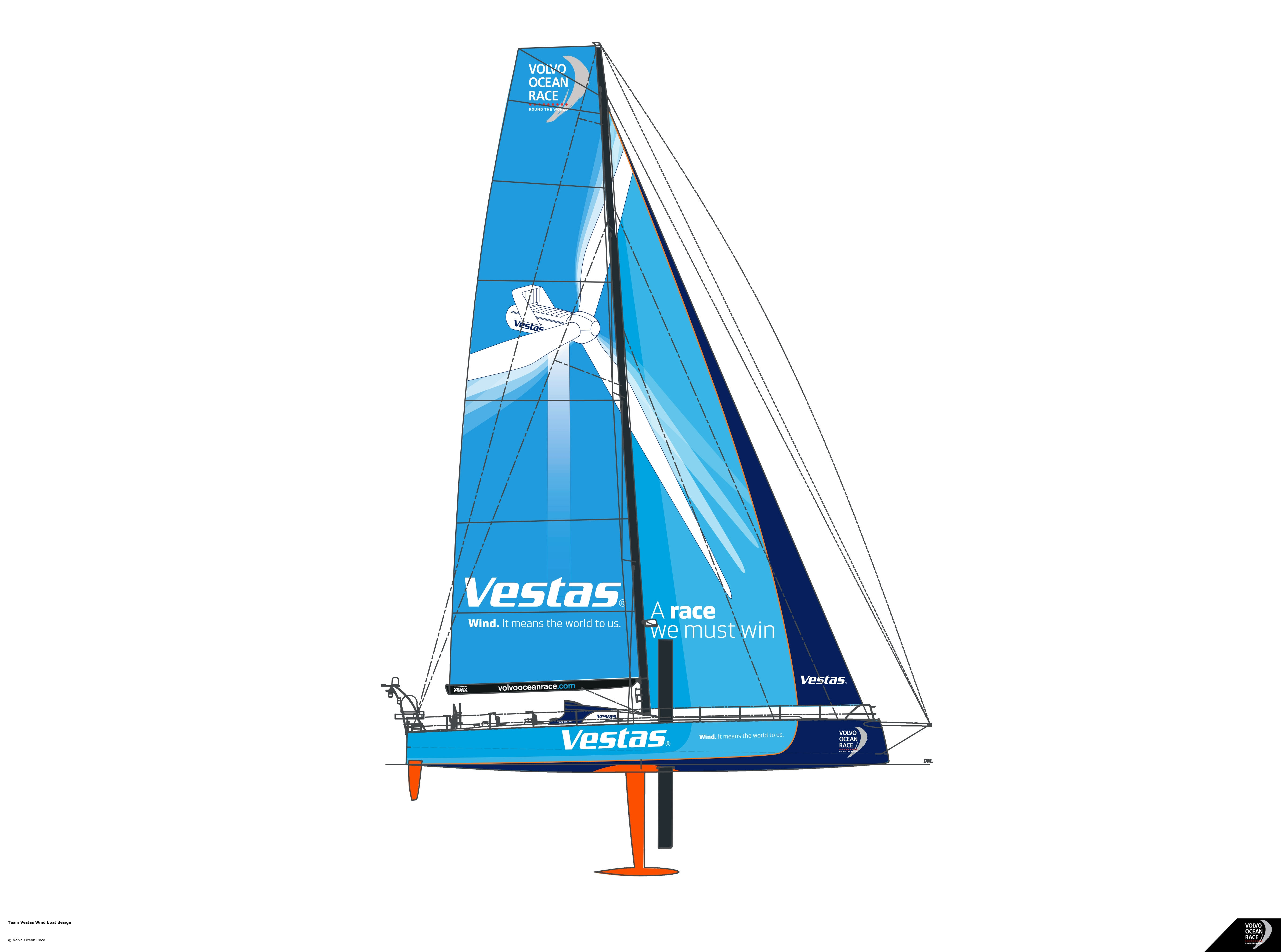 They are quite a sight at speed. 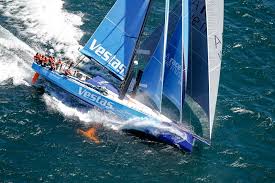 However, this boat in particular made a navigation error and ended up on a reef in the Indian Ocean a few weeks ago.  Oops.  Happily, everyone is OK, even if the boat is trashed.  Kevlar, composite construction is pretty strong but no match for a coral reef. 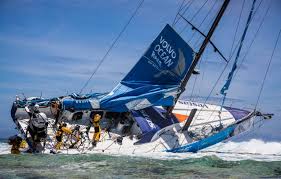 This video offers some amazing footage of the yacht at the point of impact as well as some commentary about what happened.Well, composite or not, it’s best to stay away from the hard stuff.   Yes, that’s a good idea.  Happily, events like these are quite rare as most boat accidents involve smaller boats being operated by folks that don’t know what they are doing.

Well, back to reality and it’s almost Christmas with just five days to go.  And, while Pandora’s way down there in sunny GA, we’ll soon be aboard for a nice and toasty winter in warmer climes.