Following the pottery trail and discovering the “real” Portugal

It’s Monday afternoon and we have just returned to our hotel here in Vila do Conde, the furthest north we will be headed while we are here in Portugal.  This area is not visited regularly by tourists and is very close to the northern border with Spain.  Our weather has been fabulous so far but today, for the first time since arriving here about three weeks ago, it’s raining.  Actually, it’s pouring buckets.

Last night we went out to dinner to a lovely little local restaurant and enjoyed perhaps the best dinner we’ve had on our trip. We had toured around town or should I say village when we got here yesterday and spied this very pretty little place that looked perfect for dinner called Adega da Vila.  We have found that the more off the beaten path we go the better the food.  In this case, we found a gem. 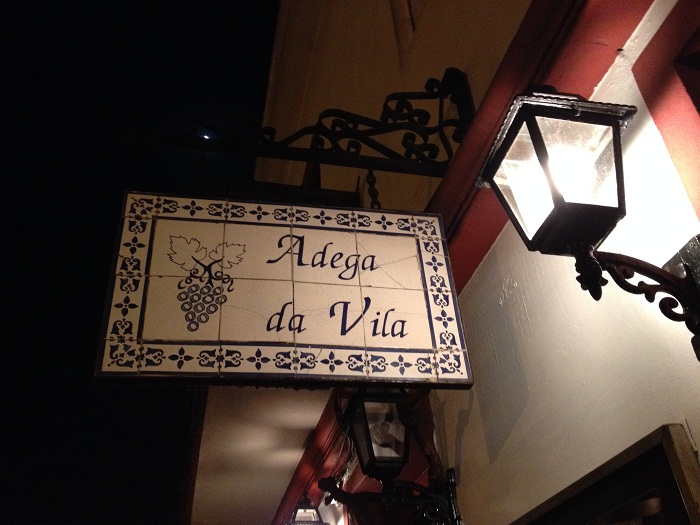 The place was completely charming.  Notice the clay colored pitchers hung above the bar to the left.  They are the next part of the story. 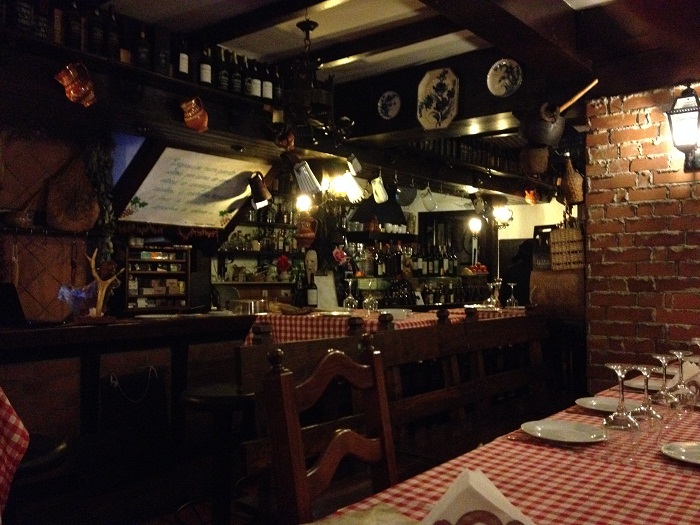 The owner, Alvaro Sa, spoke enough English so we could communicate and suggested a few dishes.  It was a treat to enjoy some things that we would never have tried unless we had been guided along the way.  We started with some thinly sliced cured meats followed by the most lovely steamed clams, the size of a quarter, or should I say a one Euro coin.  After that we had stewed chicken gizzards.  Yes gizzards!  They were to die for and were something we NEVER would have tried on our own. It’s a good thing that Brenda wasn’t totally clear on what they were when we ordered them.   Alvaro said we’d love them  He was right!  Yum…

We tried just about everything that we, or Alvaro, could think of including some lovely port wine after dinner made by one of Alvaro’s relatives.   And, the entire bill came to about 30 Euros, very reasonable.  Especially for the best dinner we have had yet.

He was a such a nice guy, Alvaro. 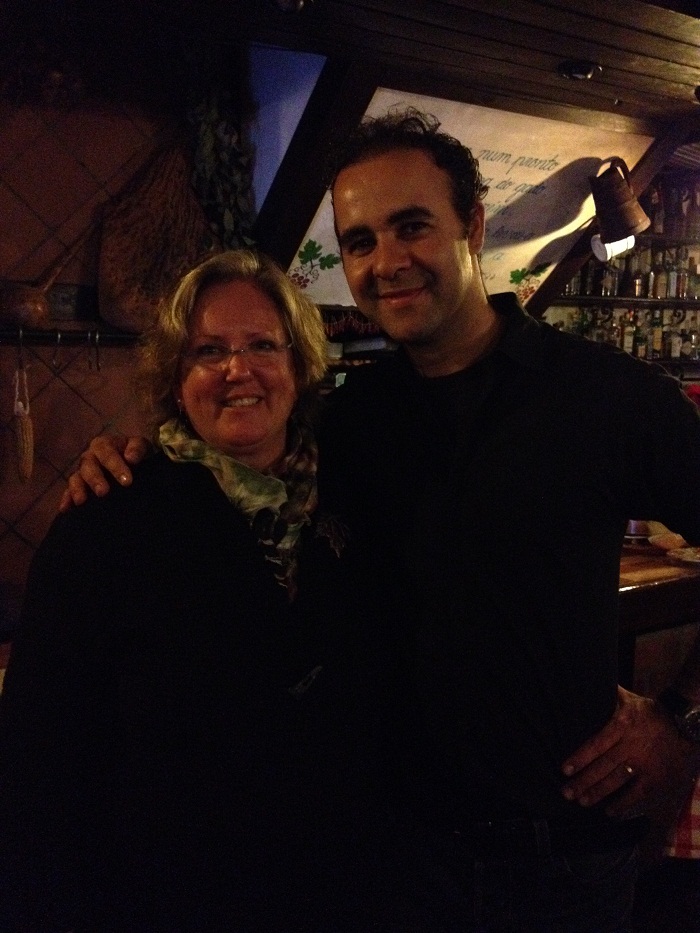 After dinner we asked him where he had purchased the lovely pottery that was decorating his bar. He thought a minute and told us of a potter that lived about a half hour north and gave us his address.

We have been looking for some pottery to bring back with us a just had to visit the source.  So, this morning, in the driving rain, we took off on a quest for pottery.   We got lost a few times (well, more than a few times) and it took more than an hour to get there but we finally did.   I have to say that the highway system here confounds me.  Where to get off?  Which exit?

Well, when we finally found the place it wasn’t the right one after all.  However, we were VERY CLOSE and the folks in the “factory”, actually an ancient dark warehouse, were very nice and while their pottery wasn’t the type that we were looking for, they knew someone who made the “right” kind.  And, after a bit of sign language and some broken English from one of our “helpers”, we were able to determine that the uncle of one of them was the place we were looking for, and he was close by.  Perfect.  And, as if that wasn’t good enough, one of them actually jumped into his car and guided us through the village to the correct place.

Perfect.  We were thrilled as we had been looking for pottery of this type and to be able to visit the actual spot where it was being made was wonderful.  The shop, or should I say factory, was very small with only four employees, two men and two women.  And… we were offered a tour.

There was pottery of many shapes and sizes. 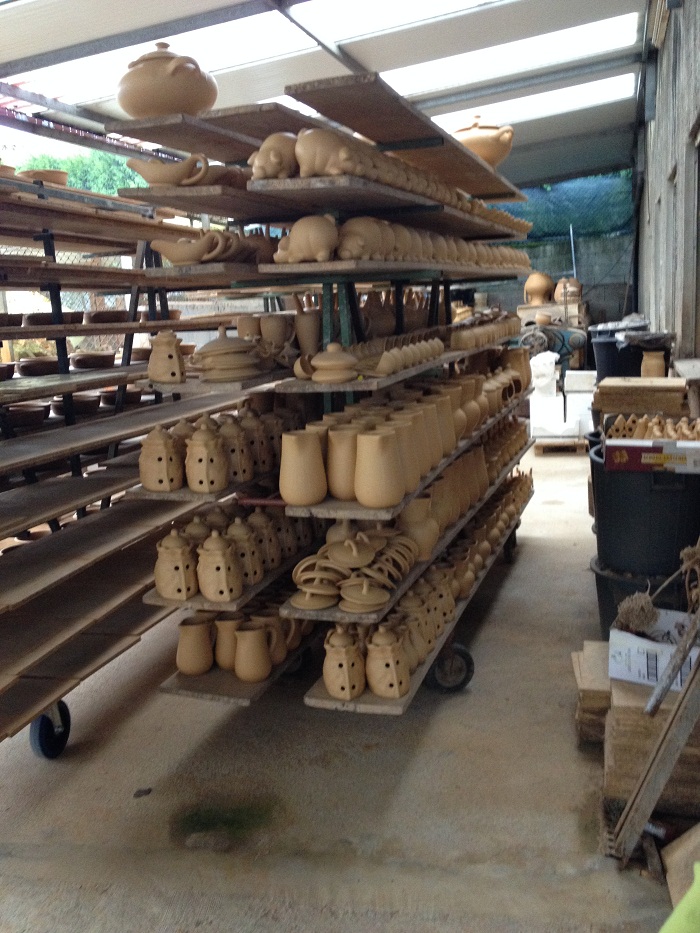 Some was hand formed and some was made using a simple pressing machine that took “blanks” and, in this case, were formed them into lovely bowls. 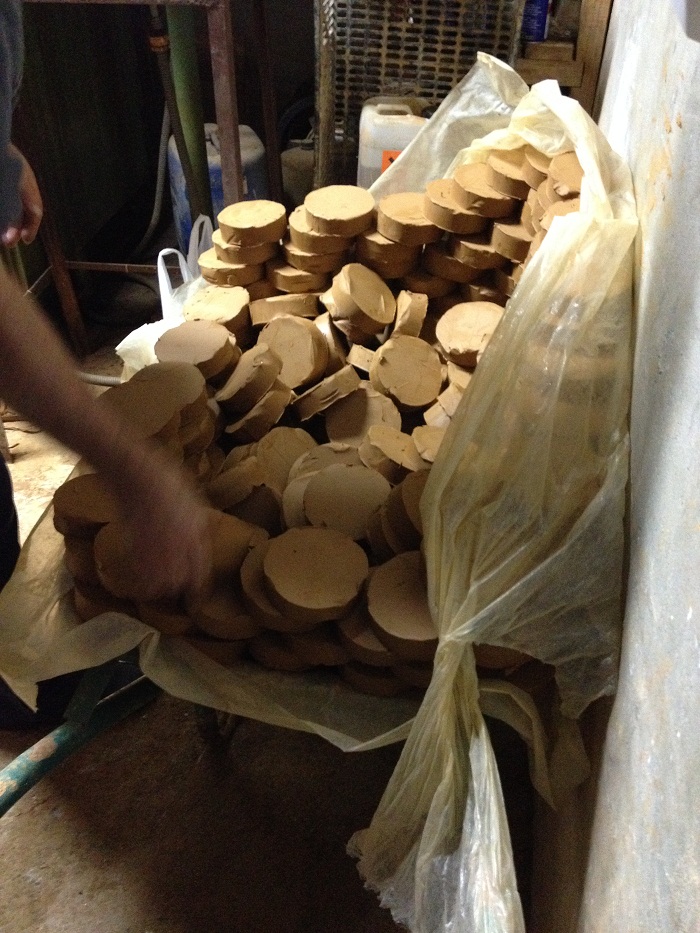 These round blanks were fed into a press that pushed them into a mold and cut the lip. 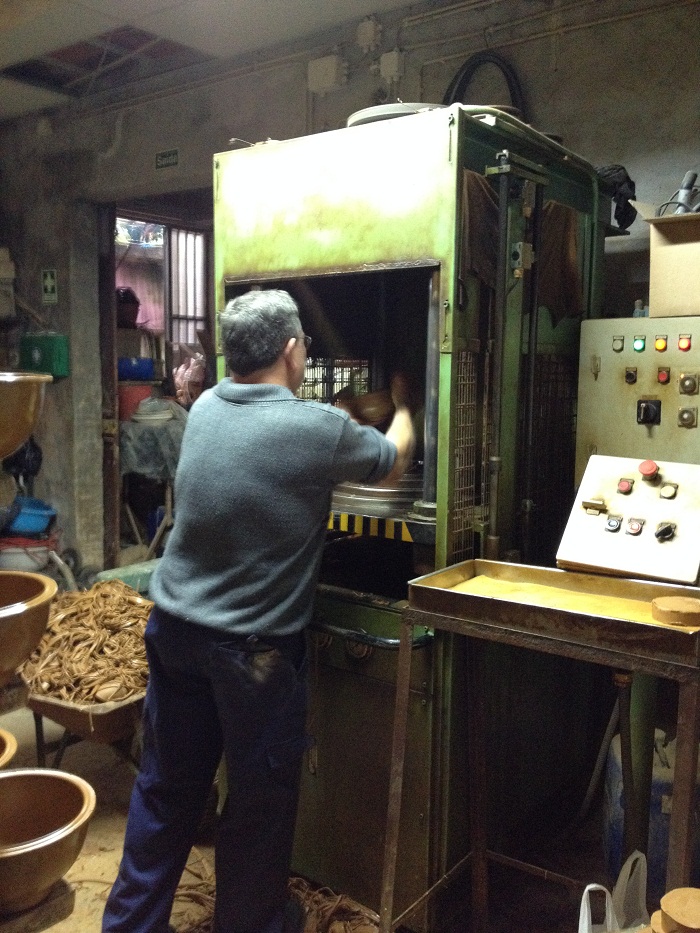 There were hundreds of bowls, fresh from the press, on shelves drying out prior to finishing. 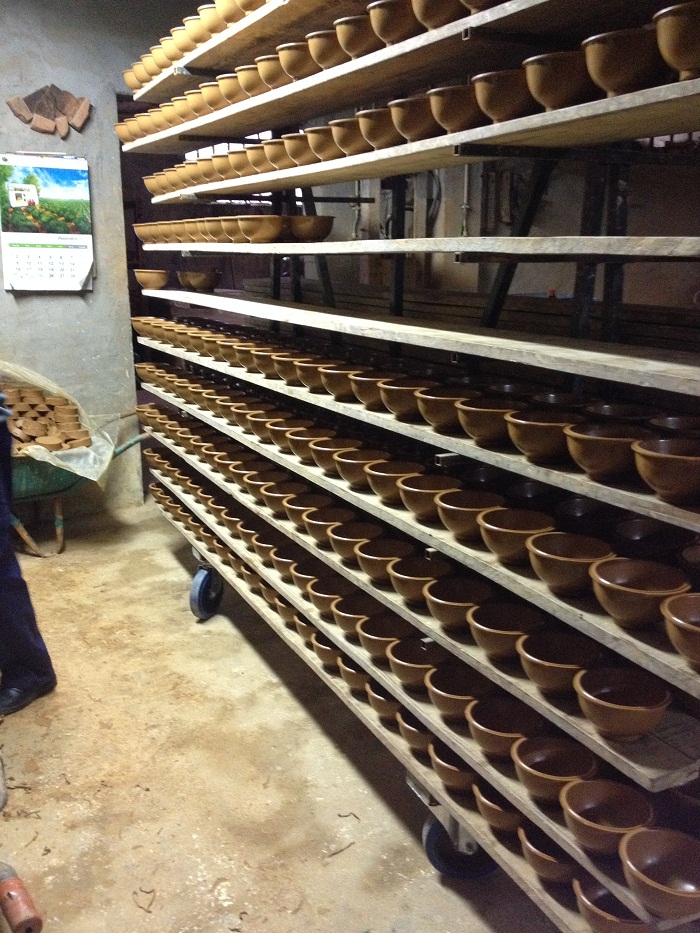 The finishing work is done by hand and then they were painted with colored glaze by the two women, both relatives.   Each piece is hand painted. 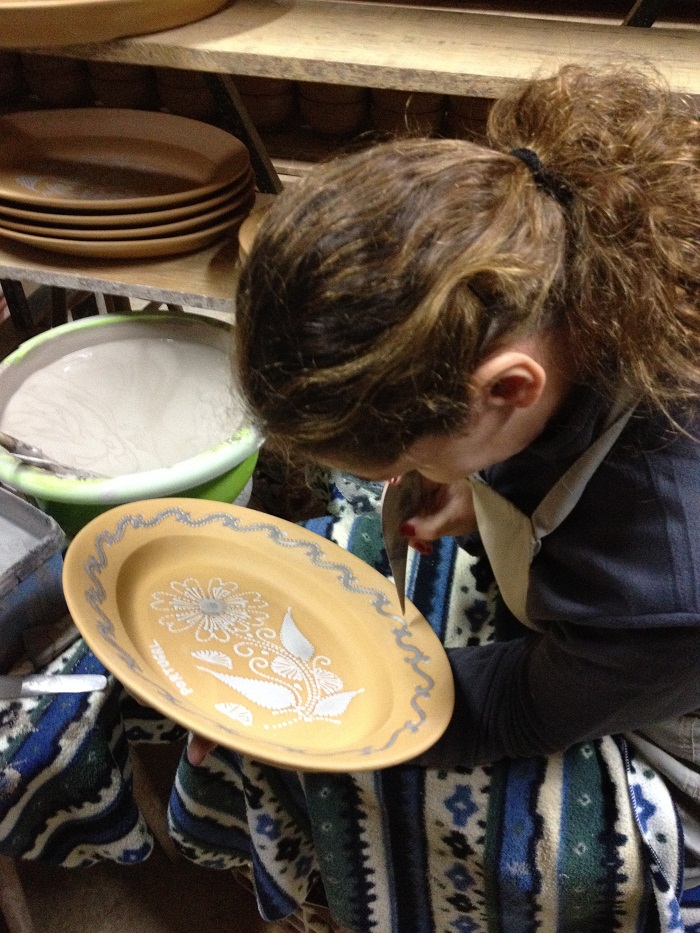 Most of the production takes place from now until spring when everything is sold in bulk for sale in shops and markets, during the summer season, to tourists.   In spite of their only being four of them, they turn out a lot of finished work.   Everywhere we turned there were racks and racks of pottery, some drying and some already decorated and waiting to be fired in the kiln.

This is a huge rack of finished work fresh out of the kiln.  It must take a lot of gas to heat all of this up to 1,000 Celsius. 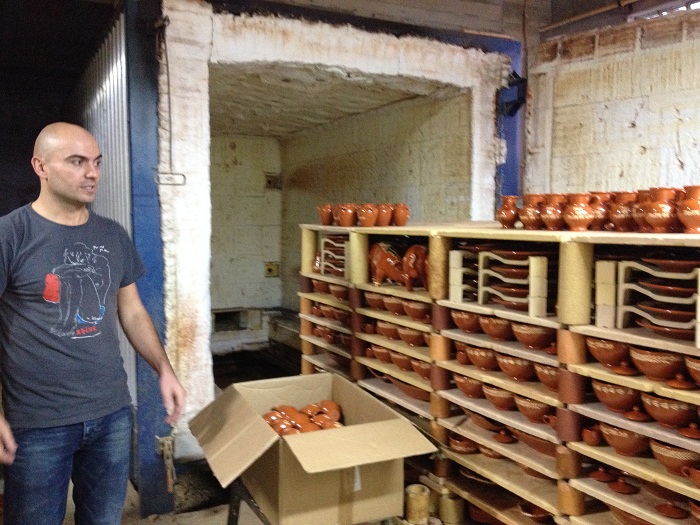 Brenda was like a kid in a candy shop.  Alas, so much to choose from, so little room in our luggage.  And this was just the “leftover” that hadn’t been shipped last season. 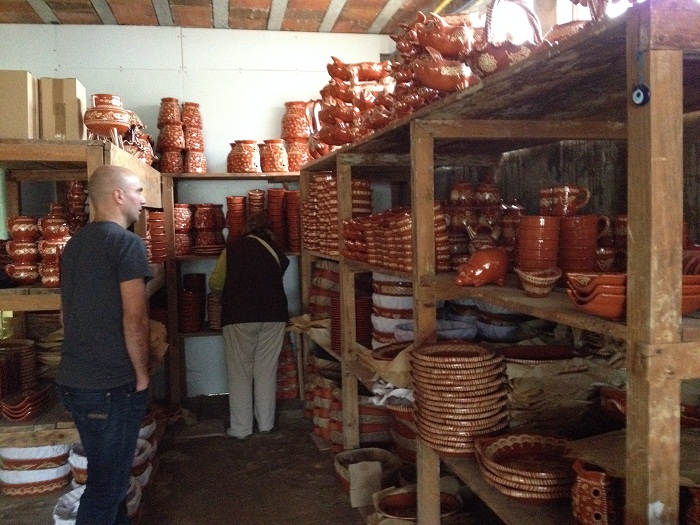 We finally settled on some lovely plates, wine pitchers and a pig.  Yes, a pig.  We may have to throw some clothing out to make room in our luggage for everything. 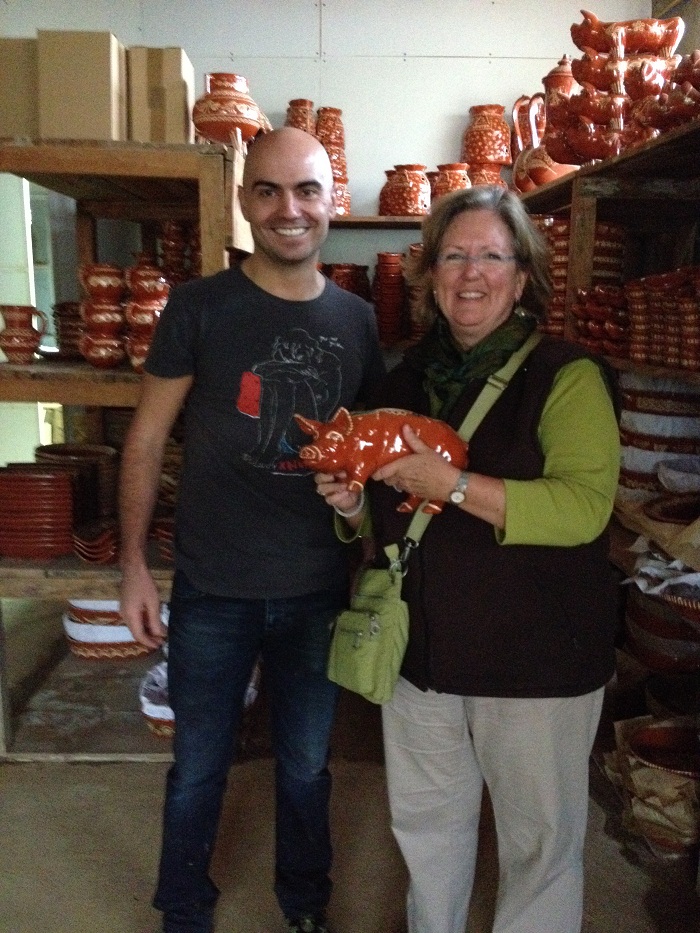 Looks like we’ll be doing some luggage shopping soon.  Good thing that United allows one checked piece of luggage for each passenger and up to 50lbs.  Fingers crossed that we can find a way to avoid paying extra.

All along the way we have tried to find places to visit that were off of the beaten path and have made decisions on where to go next based on recommendations of folks we met along the way.  It’s turned out to be a great way to see the “real” Portugal.

Speaking of real, Vila do Conde is not a place that many tourists visit in spite of the fact that it’s a lovely little town.  They always loose out to the big tourist spots like Lisbon and Porto.  And many of the European tourists that visit in the summer head to the southern coast where there are lovely beaches.

As Vila do Conde is situated at the mouth of a river, there’s a small harbor and in the past it was a thriving ship building town.  There’s a charming little maritime museum complete with it’s own replica of a ship from the 15th century, the Age of Discovery.  These ships, only about 90′ long, sailed all over the world and as far away as China and Australia.  They must have rolled terribly all the while going really, really slowly.  The bow doesn’t have quite as narrow an entry as Pandora’s. 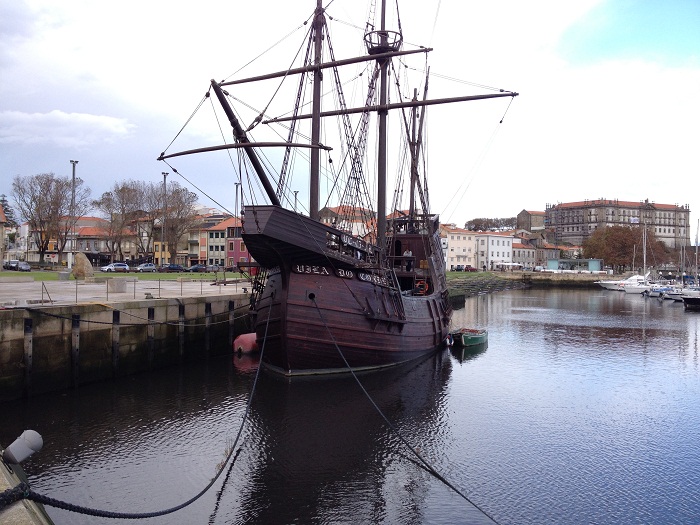 The ship was made here in the city, on the same waterfront that had launched ships for hundreds of years.  She is in quite nice condition and seemed to be quite accurate in many details. 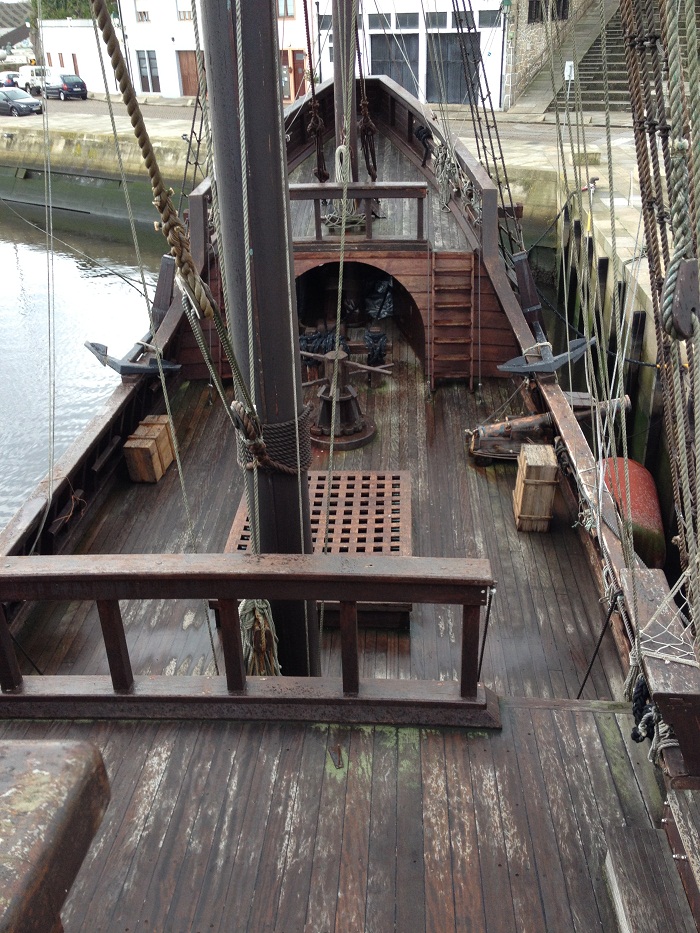 You could go in the cabins but some spots weren’t lit enough to take photos. However, the ship’s hold had good lighting.  I can’t imagine how it must have been to travel for a year or more on a ship like this.  Not too many creature comforts.  Where’s the shower?  Hmm… 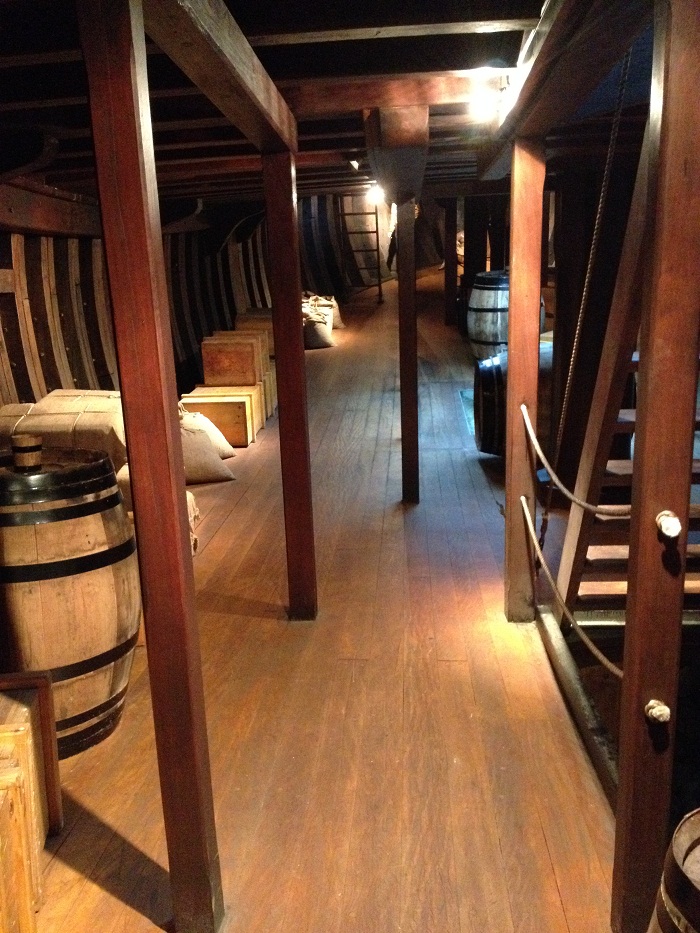 Here’s a photo of the waterfront taken when this was a thriving ship building port. 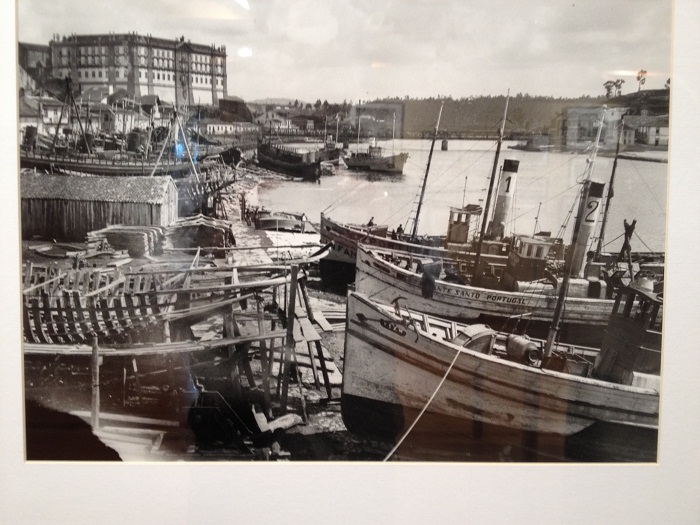 Here’s the same view today.  The convent is still there as are many of the homes. 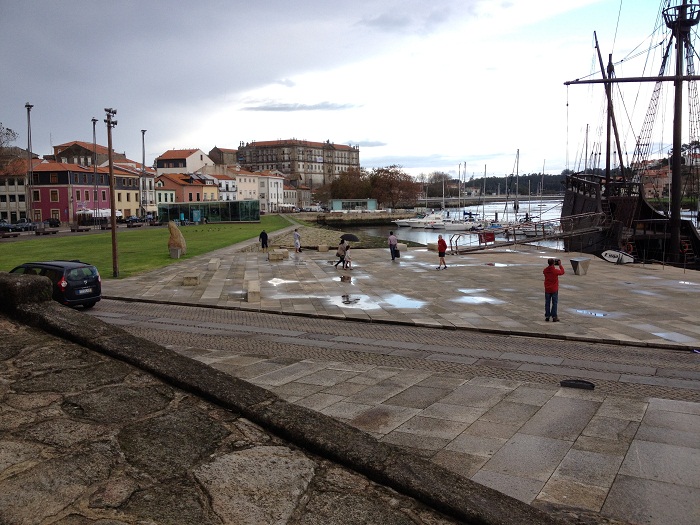 The town has many beautiful buildings and everywhere you turn there is a lovely view, even in the rain.  It’s not much different than hundreds of years ago. 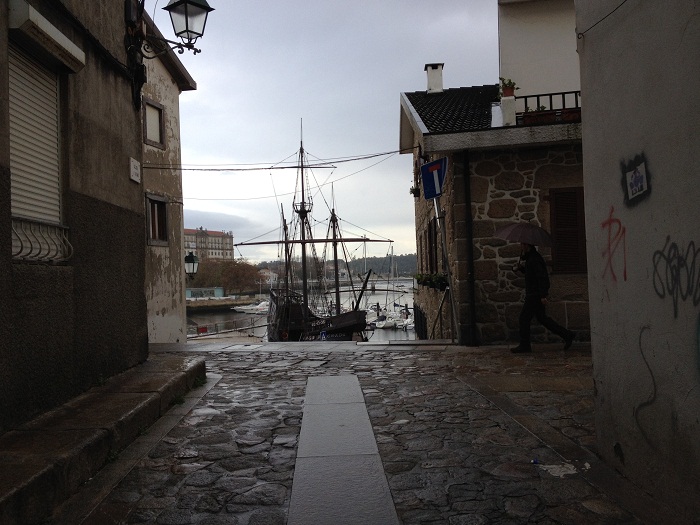 This town is a real gem and not one we would have likely visited without local help.  It’s been wonderful to make last minute decisions on where to head next and to have a month to bounce from place to place is making for a really fun trip.

Tomorrow, we head back to the Douro river and up into the mountains to enjoy some of the most remote areas of Portugal. The mountains, where we are headed, top out at over 3,500 feet and are home to much of the grapes that are made into the port wine that Portugal is famous for.

This is indeed, the “real” Portugal and we are loving it.