In Porto, our most northern stop in Portugal

It’s Thursday morning and we are now in Porto, having arrived yesterday after a few hour drive north.  Speaking of roads, it’s amazing to see how much money they have spent on roads here and it seems to me that on a per resident basis, Portugal might have more roads than anywhere I have ever been.  It’s just not that big of a country and there are roads heading everywhere.

When I asked a resident what they thought had contributed most to the out of control national debt for the country, his immediate reaction was “highways”.   He told me that the government had made many new highways over the last few years that were way beyond what was needed.  I agree, the roads are terrific.

The other reason that he felt that the debt had gotten out of control was because they had built many stadiums for their hosting of the World Cup soccer a few years ago.  He said that they had built a dozen or more and most, if not all, are now sitting empty.  We saw one of these beautiful stadiums on our trip and it was indeed a grand building with lots of nearby housing that also looked vacant. I guess it’s pretty easy to get carried away with national pride and loose sight of what it’s going to cost in the long run.

Nice stadium.  Bummer it’s not in use these days beyond a display for a local car dealer. 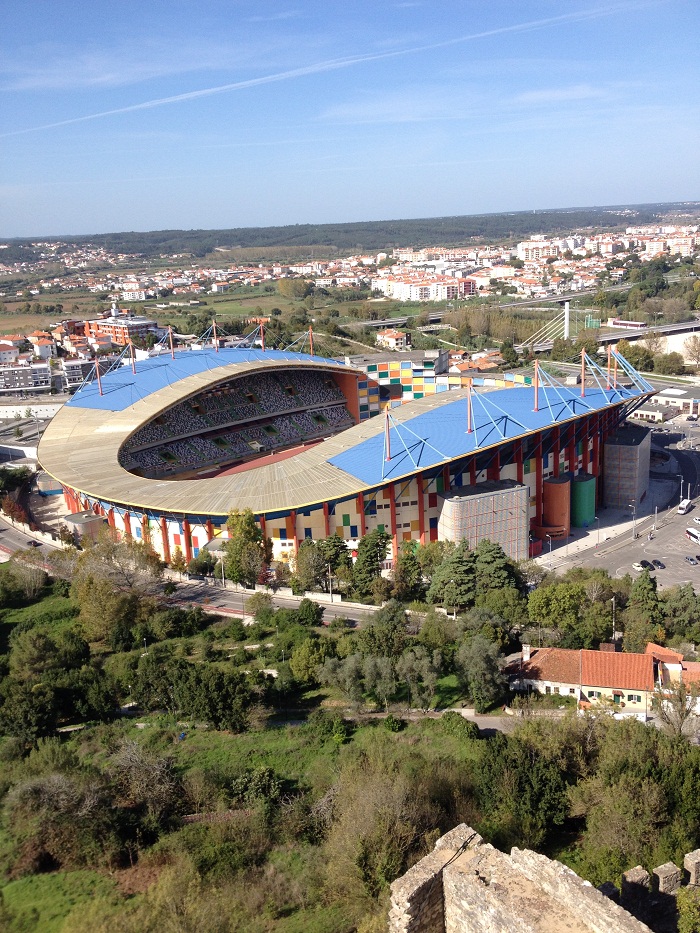 In case you are wondering, I took that photo while standing on the wall of this castle.  I’d say that’s about as much of a contrast as is possible.  In many ways, Portugal is a good example of contrast; the contrast of old and new. 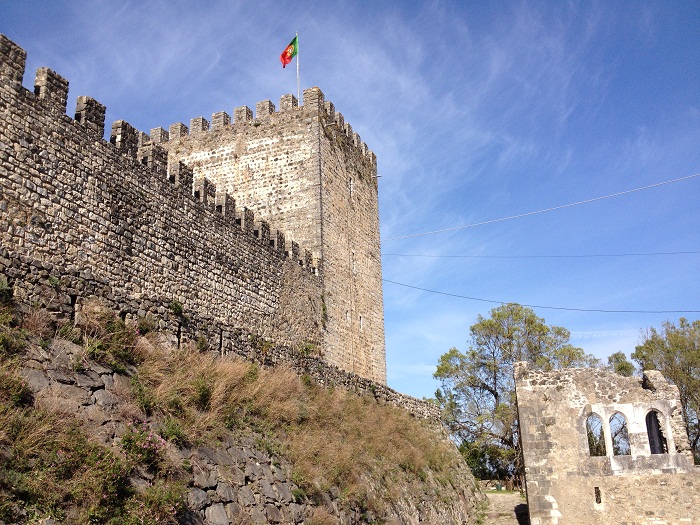 So, speaking of old, we are now in Porto, the home of Port wine which we plan on trying a bit of while we are here for a few days.   Today we will be touring the old part of the city on foot which should be fun.  I expect that it’s built on a hill as it seems that most everywhere we go involves a hill.  Always up both ways, it seems.

I should include a few more photos of our time in Coimbra.  While we were there, we headed up to the highest point in the city and enjoyed this beautiful panoramic view of the surrounding area.  Click on it and it will go full screen, I think.  Very scenic, if a bit vertigo inducing.

We loved this Mini Moka car.  It’s a car that only a golf cart could truly love.  Looks like something out of a cartoon. 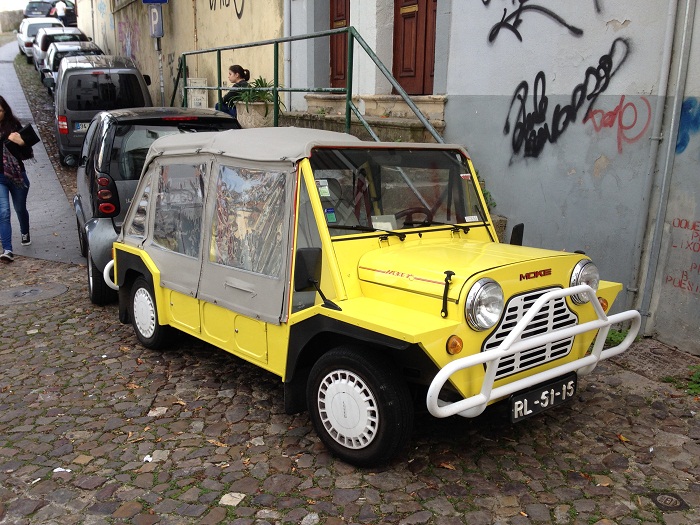 And, of course, always food on display in the markets to make you think of your next meal. 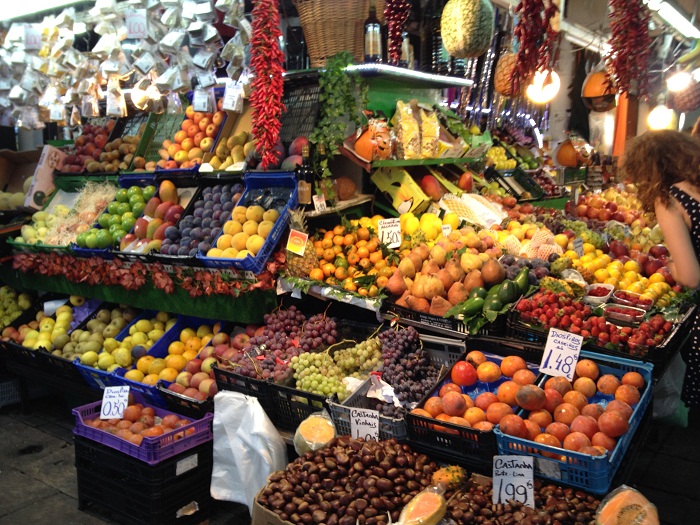 On our last night there we enjoyed a walk in the city after dark and happened upon a group of young singers who were camped out at a little bar on a back street in the historic area.  They were students at the university, the oldest in Europe, BTW.  Note that they are wearing black capes, a tradition at the university.  It was a bit chilly and they had wrapped them around themselves giving them a somewhat medieval look.   Their impromptu “concert” of traditional Portuguese ballads was perhaps designed to get free beer, which they did.  We loved it and sat across the street at a bar and had a glass of wine, listening to them play for an hour.   It was a magical scene. 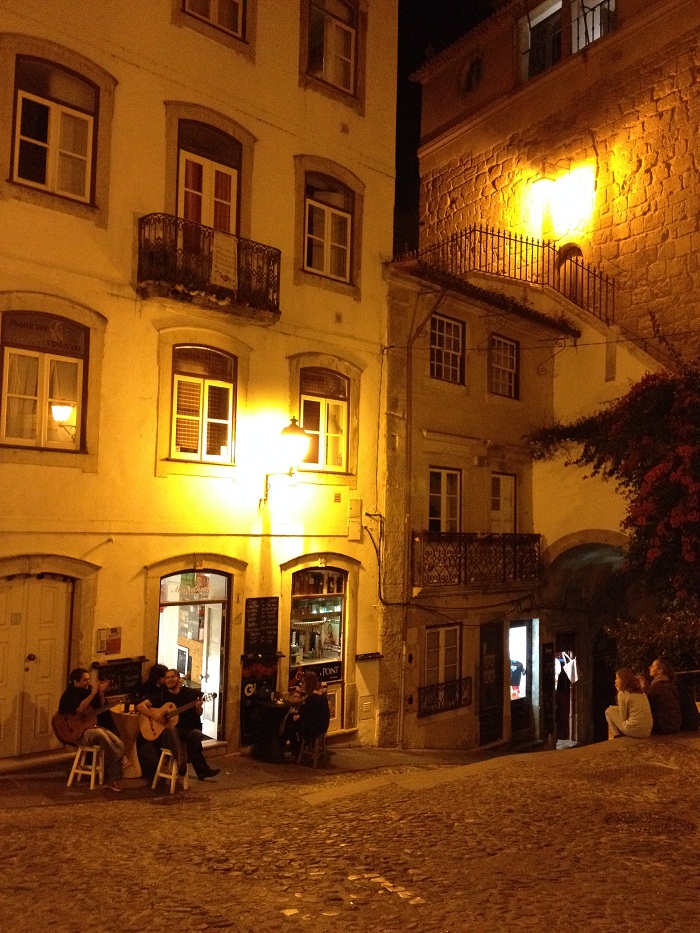 What a wonderful and completely non-commercial experience that topped off our visit.  How serene.  A nice trio of young men. 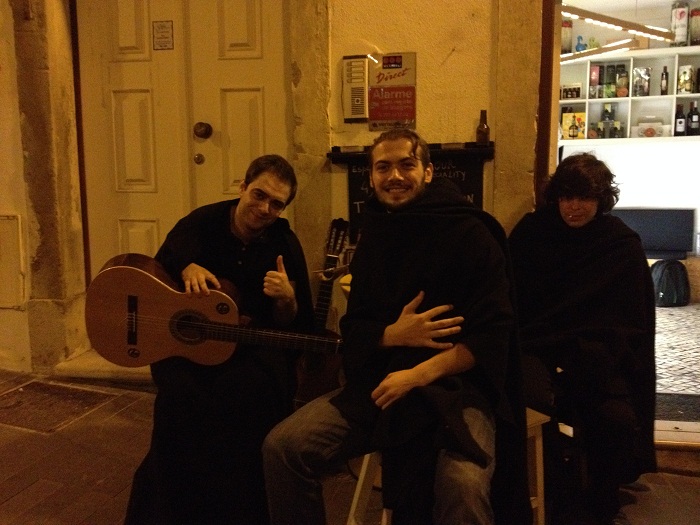 The one in the center was particularly engaging and charming.  However, I am not sure I’d want him dating my daughter, if I had one.  He looked like a bit of a scoundrel, in a nice way.   I guess that only added to the magic of the moment.

The rest of the city looked lovely in the twilight. 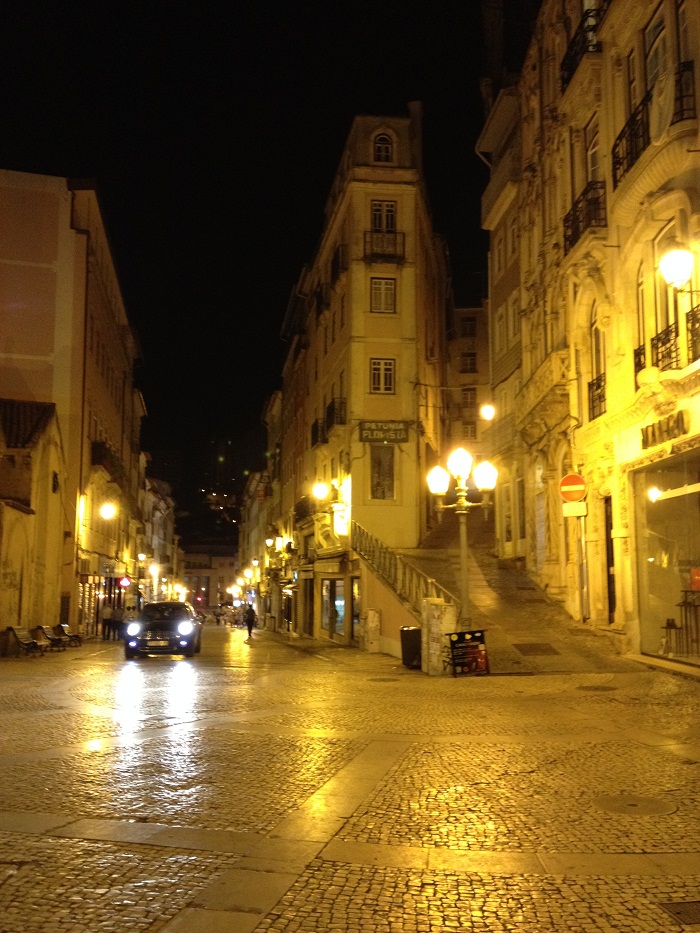 Off to simple dinner.  And, all this with a 6.5 Euro bottle of nice red wine.  Can’t beat it.   We have eaten a LOT of tomatoes on this trip.   They are, unlike in the US, as good as they look. 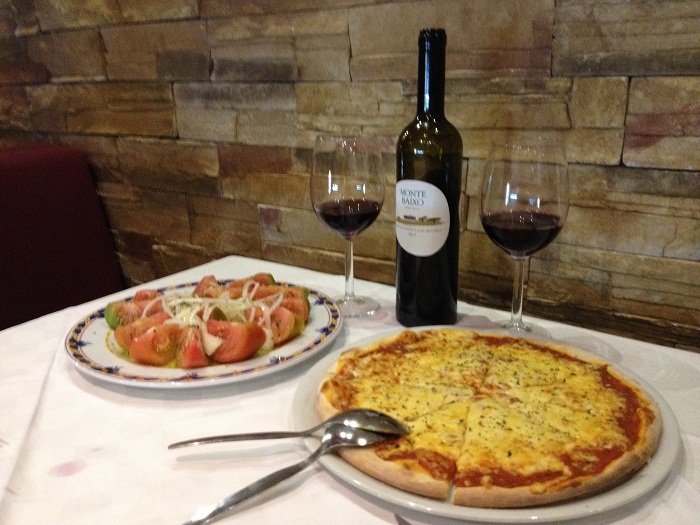 All this is making me hungry.  Perhaps I’d better head off to breakfast.