>It’s the last sail of the season. No, really, I mean it!

>Brenda, what about one more weekend on Pandora in Annapolis next weekend?   That’s what I asked Brenda on the phone last week when I was on business in Atlanta.   Fortunately, she said yes.  Was it a desire to go sailing one more time or an agreement based on the fear that I would slit my wrists if I was away from the boat for too long?  I guess I will never know.  However, one not-so-subtle motivation for her might have been my suggestion that we visit Chesapeake City and the weaving store that I had spied on our visit there a few weeks ago when I was delivering Pandora from Norwalk to her winter home near Annapolis.  Whatever the motivation was, off we went on Saturday morning in the rain to visit Annapolis one more time.  The weather forecast called for rain, and lots of it on Saturday.  Yes, the weather man was right, actually perfectly correct for once.

I had also had heard from a couple from Toronto who were considering the purchase of a SAGA 43 that they wanted to meet us in Annapolis on Saturday to see the boat and spend some time on board to compare notes on the design.  They had narrowed their search down to two boat types, a SAGA and Caliber 40 a more traditional moderate cruiser.  That is to say, one boat that is not too fast with lots of storage and the SAGA which will get them there much faster and in style if perhaps with a bit less stuff on board.  I know that deciding what to buy can be struggle in any major purchase but to me there isn’t any comparison.  I still love having a boat that will pass about anything that comes our way in normal cruising circumstances.  Besides, with our speed we can be sure and get to port before the stores close.  No, I won’t be winning any club races but for all out drag racing from point A to B, the SAGA beats (almost) all.  It will be interesting to hear what they decide.

After getting settled aboard in the pouring rain on Saturday we were happy to return to shore and have dinner with some great friends and fellow Corinthians who live in the neighborhood where Pandora is berthed this fall.  Dick and Valerie treated us and two other couples to a wonderful evening at their home.  Terrific food and company.  Dick and Valierie have taken their sailboat Spring Moon, a Pacific Seacraft Crealock 37, all over including a number of trips to Bermuda as well as extensive cruising in the Easter Caribbean. Interestingly, Dick’s boat is the actual one featured in, I think, the book by  Mate, “The World’s Best Sailboats”.  If not that book, it was another.  In any event, the boat has really sweet lines.

It was great spending time with fellow cruisers and made an evening in the rain much more fun.

Sunday bright and sunny.  What a difference a day makes!  That certainly applied this weekend as when we awoke on Sunday morning to head out the skies were clear and there was a nice NW breeze.    Dick and Valerie had suggested the prior evening that we might want to head down the bay about 10 miles to Galesville MD for the night so off we went.

Galesville was once a fairly important stop for steamboats that moved from town to town along the Chesapeake Bay prior to the building of reliable roads and the widespread use of automobiles.  Now Galesville is a quiet town with loads and loads of sailboats.  I am still still struck by how few boats sit out on  moorings here as opposed to in the areas where we normally sail in New England.  Up there marinas are common too but many more boats are on moorings.  In MD there are so many creeks and bays that waterfront property isn’t quite so precious and there are marinas everywhere.  However, in Galesville there are some moorings, somewhat of a rarity.

Our run on Sunday took us out into the bay, past a few large ships anchored south of the Annapolis Bridge and an unusual site, a US Navy Sub.  Now that’s not something that you see every day. 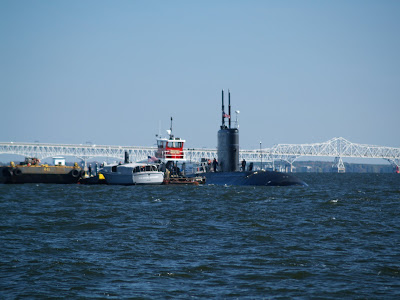 Of course, there was a very attentive Navy Hard Bottom Inflatable (HBI) buzzing everyone that became too inquisitive. 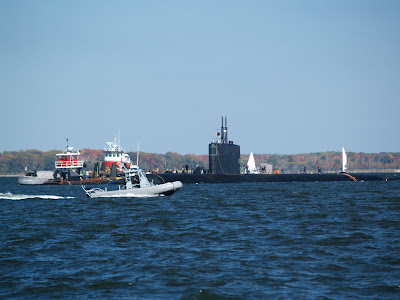 Bummer about that as I wanted to get some better photos.  The HBI, blue light flashing on deck, following our every move as I snapped away, made me feel like a spy.

In all of my years of boating this is only the 3rd time that I have seen a sub in “real life” and the only time that I was able to get close enough to get a good shot.  Perhaps I should say “photograph” as opposed to “shot”.  Don’t want the brass getting anxious.  You know how intimidating Pandora can be when she is bearing down on you at speed. 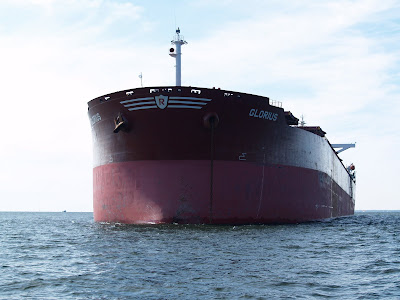 As we dodged the commercial traffic Brenda was just thrilled when I passed the bow of this ship.  Yes, she was anchored and yes we really were this close.  I could see some big scratches in the bottom paint on the bow.  I wonder what they hit? 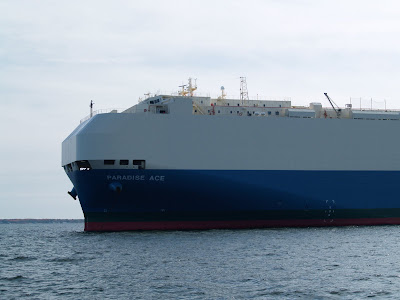 There was also a car carrier ship anchored nearby.  It’s hard to see how this type doesn’t just roll over in the slightest breeze.  Talk about windage. 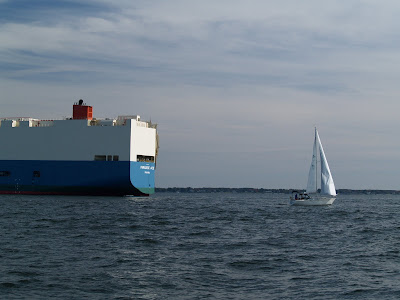 Don’t think it looks that big?  How about seeing something like this loom out of the fog some night?  The scale suggests how much fun that would be. 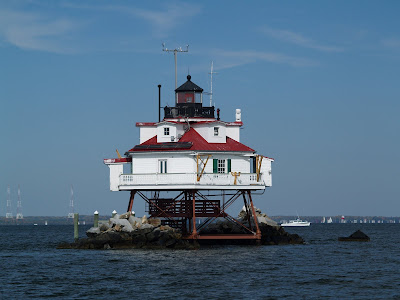 Further down the bay we passed one of the last screw pile lights left on the bay .  The Thomas Point Light is quite a sight.  In order to get this close to get a shot I anxiously watched my depth sounder as it showed less than 5 feet under the keel.  Had I misjudged the depth I would have been able to take photos of the light as the sun set. Not my first choice. 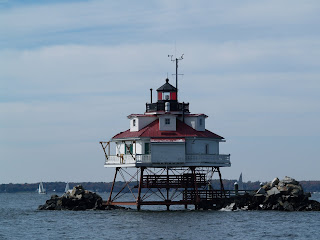 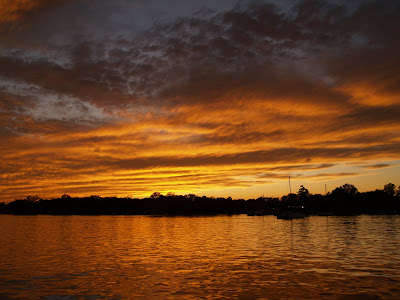 Now this is a nice sunset photo from Sunday evening aboard Pandora.  Better from this vantagepoint than aground off of Thomas Point Light.

That’s it for now.  Our last sail of the season (really, I mean it).  In a few weeks Pandora comes out of the water for some winter work and back in the water mid March.
I plan on putting up posts of the projects as I tackle them and am sure that the progress willl be as scintillating to all of you as it will be to me.
This entry was posted in Uncategorized. Bookmark the permalink.