>Where (was) Pandora this summer?

>I prefer to do a post when I have some current information to share about what we have done in the last week or so.  However, as the season for us is drawing to a close I thought that it would be fun to look back at some of the places that we went this summer and note a few highlights.

This season’s sailing took Pandora farther than we have sailed in any one season.   I don’t know how far we actually sailed as I did not log the daily distances but we covered a lot of ground, or should I say water. It’s unfortunate that I didn’t keep track and I plan to keep track in the future.  We began our season just prior to Memorial Day in Norwalk where we had Pandora for less than one week at the Norwalk Yacht Club.  In fact, it’s the first year in nearly 15 years as members of the club that we didn’t take even a single day sail in “local” waters.  I decided a few years ago that I had had enough of sailing in Western Long Island Sound so we have been moving her around a lot to take advantage of having her in a variety of places.  The logistics are daunting but it makes for a lot of variety and there is just so much else to see.

Now that I have a boat that can really cover a good amount of ground in a day, the miles just don’t seem nearly as long as they used to.  With her long waterline of 41.5′ on a 43′ hull, we can easily make 7+kts for hours on end, even against a nasty chop.  This makes 70km days a reasonable option.

After putting Pandora back in the water we headed east to Mystic where we used a friend’s mooring (you can read about the fun finding the missing mooring chain in my May 31st posting) for the month of June.  On and off the boat for a number of long weekends plus a week over Memorial Day weekend had us visiting the eastern end of Long Island Sound and Block Island. 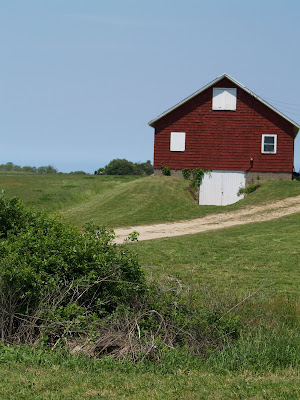 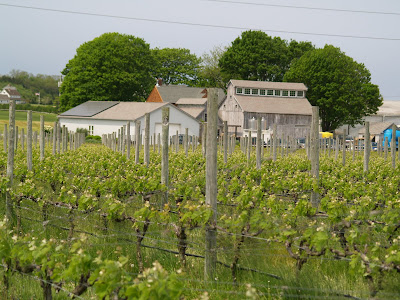 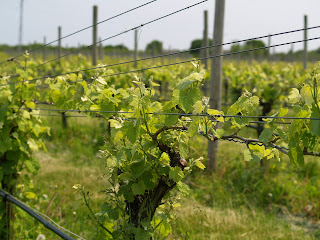 Our visit to the North Fork of Long Island included a visit to Shinn Vineyards, the only biodynamic winery on LI and perhaps in the US.  You can really see the difference in the look of the vineyard when no herbicides are used.  It’s so much more lush and natural looking.  They have really nice weekly e-mail that’s worth subscribing to.

For the month of July we sailed in and out of Wickford prior to heading up to New Bedford and on to Maine for August.  Our favorate place to visit in Wickford is Pleasant Street Warf, run by old friends.  What a great spot.  It looks like it did 50 years ago. 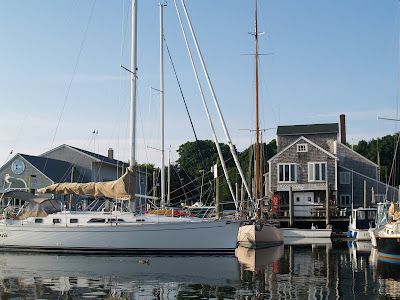 A highlight of the summer was a weekend spent on board with my two sons Rob and Chris as well as my father when we made a run from Wickford to New Bedford, with a stop in Cuttyhunk.  My dad who just turned 80 is in terrific shape (I will be thrilled if I have his energy at 80) and we had a ball.  It was the first time in all my years of sailing when the 4 of us were on the boat together. 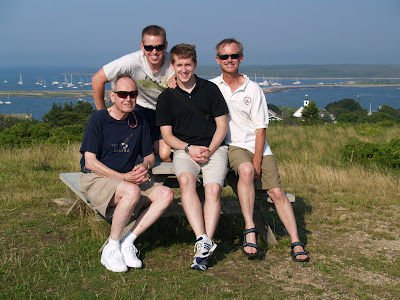 I just love this shot of us at the top of the hill on Cuttyhunk. 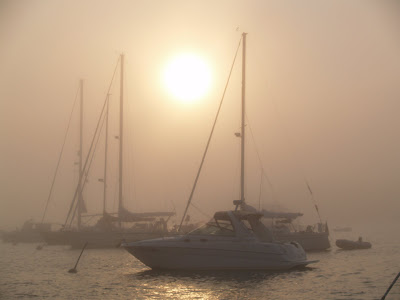 We also were treated to an amazing sight as the fog descended on the harbor about one hour before sunset.   It’s hard to believe that these two shots were taken on the same day.   As they often say about weather on the water, “if you don’t like the weather, wait an hour”.  And that certainly suggests that being prepared for anything is key when you are on a boat. 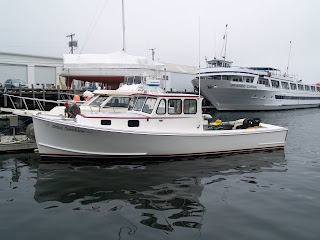 We have sailed Maine every summer  for over 10 years now and while we didn’t cover as much distance in Maine as we normally do we had a really great time.  We lucked out with terrific weather in spite of the record rainfall that this summer brought to New England. 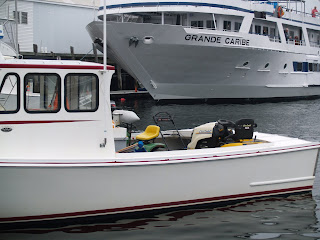 Have you ever wondered how they cut the grass on remote island summer homes?  Here’s a shot of a boat docked in Rockland fueling up the John Deer for a visit to cut some lawns.  I wonder how they get them out of the boat when they get there?  I should have asked. 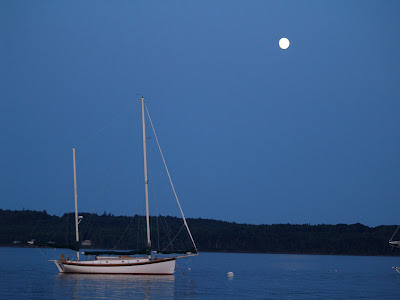 How often do you see a moon rise like this one in Rockland harbor?  Not a bad looking boat either. 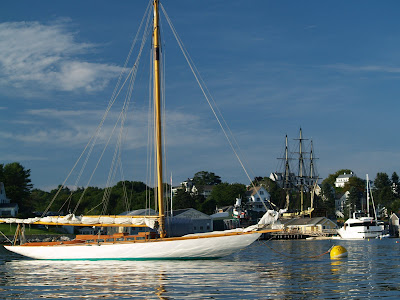 Our visit to Boothbay harbor was fun and this shot of a NY30 is a good example of the wonderful wood boats that you see all over Maine.  There’s a thriving boat building and restoration business going on in Maine these days. Note the tall ship being worked on at the shipyard in the background.

Two weeks in August in Maine followed by nearly two weeks in early September found us heading down the coast with another stop in Wickford and back to Norwalk.  A hurricane went through in late August and in it’s wake we had a week and a half of winds from the North and West which made for unusually fair winds when Brenda and I ran from Rockland all the way back to Norwalk.

A favorite place we visited this summer was Allen Island off of Muscongus bay just a bit east of Boothbay Harbor, the summer home of Andrew and Betse Wyeth.  Unfortunately, Andrew died earlier this year but we were pleased to see Betse still using the island.  In fact, she arrived when we were on one of their moorings.  She waved to Brenda, a thrill for her indeed.  The Wyeth’s homes on the island show what can be done when you have good taste and style along with the money to indulge your vision.  There are many homes on the island and the scene does look just like one of his paintings.

Quite a variety of architecture on Wyeth’s islands and it all holds together wonderfully. 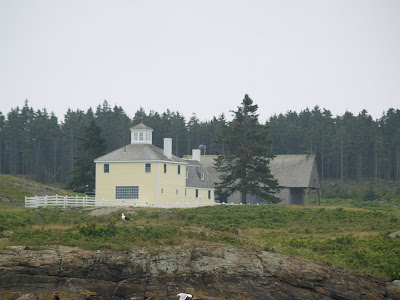 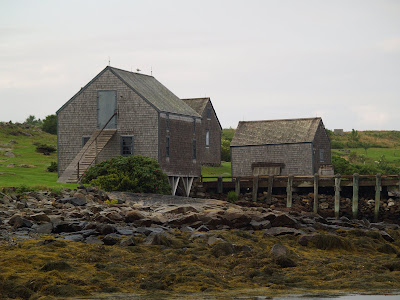 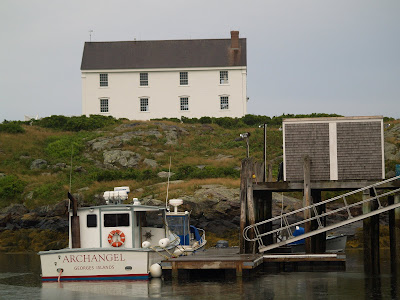 This is one of the Wyeth launches and is named after the famous explorer, Weymouth’s ship the Archangel. 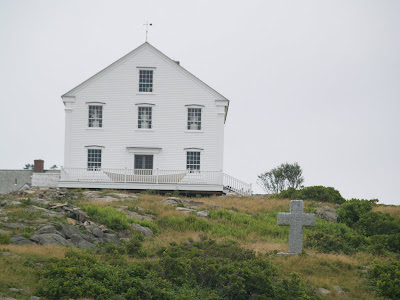 This view also includes a cross commemorating the landing of Archangel, way back in the 1600s by Charles Weymouth who, on behalf of King George, explored the coast of Maine.  When he anchored just north of Allen Island he captured several native Indians and took them back to England where they were presented to the king. Check out this link to learn more. There are sheep all over the island and they keep the trees from overtaking the landscape.  It’s one of the most idyllic spots along the coast.
After we left Allen Island we wound our way through islands in Muscongus Bay. This shot off of the chart plotter really gives a good feel for how rocky the coast of Maine is.  Not a place that I would want to traverse without good charts and a GPS. 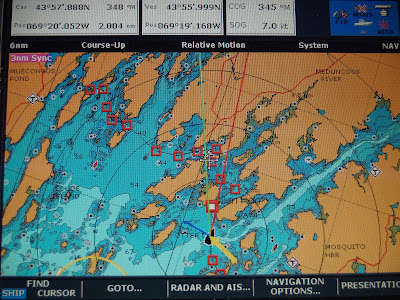 What trip with Brenda would be complete without a visit to see some sheep, or in this case goats. 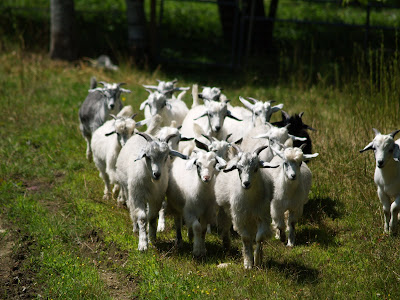 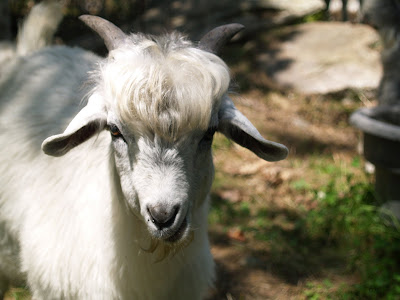 This one in particular boasted a great haircut.  Perhaps a bit of an “Elvis” doo.  He did have personality and was quite inquisitive. 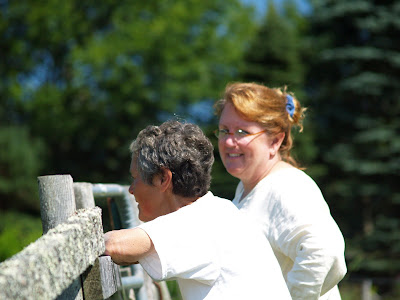 One of the farms that we visited was run by a older women who was a fountain of information on some historic and rare livestock breeds that she and her husband keep on their farm .  It’s the passion of folks like this that make for rich experiences along the way.   Brenda and I really enjoyed talking to her.

I can’t sign off without including one of Brenda’s recent tapestries with a nautical theme.  For a girl that says she isn’t crazy about things (or experiences) nautical, she is drawn to scenes of the water.  She did this piece recently for a show commemorating the 400th anniversary of Henry Hudson’s “discovery” and trip up the Hudson River.  She’s not crazy about the piece but I think it’s great.  Perhaps it belongs on Pandora.  Now, there’s a thought. 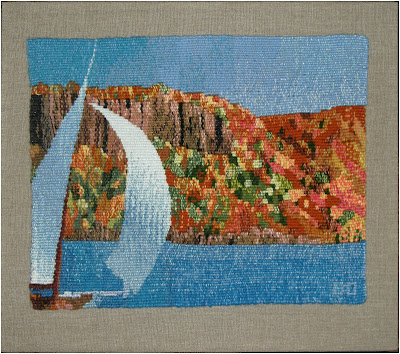 Now Pandora is in Annapolis where she will spend the winter.  I have a few projects planned including painting the mast and raising the waterline.  The mast will be done professionally with a heavy dose of do it yourself by your’s truly and the waterline needs to be raised by me as well.  I have been meaning to raise the waterline for a few years as the additional 1,200 lbs of lead that was added to the keel when I purchased the boat plus all the additional cruising gear that’s now on board have us down below the painted waterline.  Not good.

It’s going to be a busy winter with more than a few weekends in Annapolis to get all of this done.  Hopefully the winter will go quickly and soon we will be doing some early spring cruising in the Chesapeake Bay.

One response to “>Where (was) Pandora this summer?”