It’s Monday morning and the sun is just peaking up over the eastern horizon as we make our way into Hampton Rhodes after an overnight from the Rhode River near Annapolis.  The sky is overcast but quite dramatic.  I tried to time the shot when the lighthouse was blinking.  No luck… 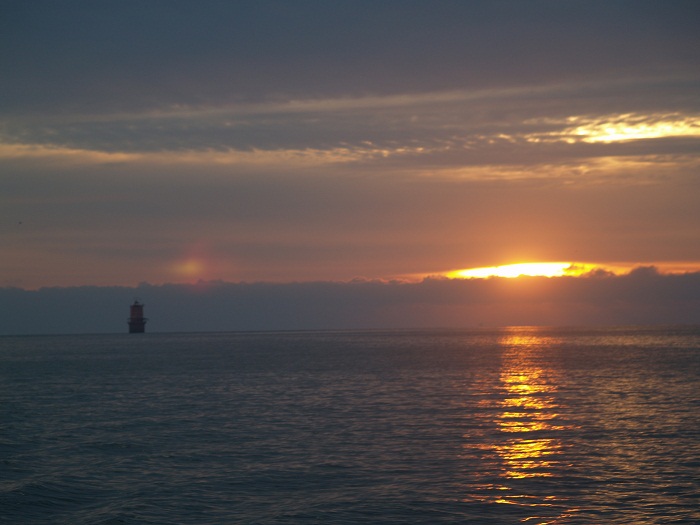 The weather was unremarkable for our overnight run, with virtually no wind.  All we got was a light shifting 5kts from a variety of directions.  No wind.  Not so good.  Glass like conditions.   However,  really good for an easy run under power.

I certainly prefer to sail over motoring, but it’s nice to just turn on the motor and point toward where we need to go.  That’s particularly appealing when you are in busy shipping channels such as in Chesapeake Bay, which we were, that’s for sure.

As we headed down the bay, beginning mid afternoon yesterday, we were constantly being passed by ships come up and down the bay, some as large as nearly 1,000’.  It’s pretty impressive to see a cruise ship steam by, lit up like a city building.  No wait, these monsters are city buildings, or at least a large town, but one that floats.

In spite of all the traffic, the night was pretty uneventful (that’s good) with a lot of time spent keeping track of ships on AIS, the “automatic identification system” that all ships have on board and we monitor aboard Pandora.  This system transmits their speed and direction and that information is interpreted by my chart plotter to give me a display of CPA “closest point of approach” and other information regarding each ship that is quite useful.

In particular, the name of the ship is noted which makes it easy to call them by name.  In the past, when I called a ship, noting their general location only, I didn’t usually get a response.  Now, knowing where they are and how close they will be to me, perhaps in 20 minutes, takes a lot of the anxiety out of the picture.  It’s great to be able to talk to them on the radio and get an immediate answer and advice as to how to stay out of harm’s way.  That’s really great, calming actually. .

In the past, prior to AIS, you had to look at the lights and try and interpret what they were going to do and scramble out of the way, whatever I was able to determine was the way they were going.  At night, this was pretty difficult.  Much better now, that’s for sure.

Much of last night was pretty mundane but the highlight for me was when I spied a tug on AIS that was approaching from the south.  The name displayed was something like “Tug Jim” or other such mundane name.  However, the AIS system also tells you where they are going, such as Baltimore, for example.  In this case, the signal designated their destination as “The Hell if I know”.    I wonder what the US Coast Guard would think of that.  Hmm…  I guess “Jim” has a sense of humor.

Anyway, we are now tied up at a dock at the Hampton Yacht Club and are enjoying a day of rest while we wait for the weather off of Cape Hatteras to clear up, if perhaps only briefly.   I spoke to Chris Parker yesterday and again today and his advice is to time our arrival at Hatteras for around dawn on Wednesday.  That suggests a departure from here early on Tuesday morning.

NO WAIT…  Here’s another idea.  With the short weather window to get around Hatteras and all the anxiety that goes with that, let’s just bag it and go through the Dismal Swamp Canal.  I like that idea…

Ok, so, after much debate (in my mind anyway), as I finish this post, we are motoring down to Norfolk where we will go out to dinner and a movie and then leave in the morning to head INSIDE, the easy way, to Beaufort and then a combination of outside and the ICW to GA.  There are also crew considerations in all of this and one of my guys has to leave prior to GA so going inside this way makes a lot of sense.  Besides, the weather window we need to make the run to GA may very well close before we get there and, well, let’s just say that I got a headache thinking of all the possibilities and just decided to bag the whole thing and go inside.

And, to top it all, this is supposed to be fun and I just love the run from Newport News to Beaufort and the Dismal Swamp Canal.

Yes, that’s what we are going to do.  And, that route will make for some fun posts.