Heading to GA this week, I’m pretty sure…

It’s Sunday morning early and Pandora is at Camp Letts near Annapolis MD.  For the last two days I have been attending the SSCA Gam here and enjoying time with some 350 other cruisers for a meeting with seminars and speakers on all sorts of topics.  Actually, it’s amazing just how many folks I recognize in the group.

This gam, upon which the one we modeled our Essex June event, is one of several that the Seven Seas Cruising Association, SSCA, does throughout the year.

The event is located at Camp Letts, a Boy Scout camp just south of Annapolis on the Rhode River.   As the event has grown over the years, to it’s present size, with some 300-400 attendees, they have outgrown most locations that might house them and certainly the ones that they can afford, given the low cost of the events that they try to put on to attract cruisers.  The location is quite a beautiful setting with great views of the harbor from 180 degrees.

The speakers were quite good with talks by Chris Parker, the weather router that we use, as well as talks about proper rigging of a boat for offshore passages, how to set up a boat to “live off the grid”, safety and where to go when you cruise.   All and all, a great group of speakers.

It was good to see Chris Parker in person again as I speak with him on the radio off and on and get his updates on the weather nearly every day.   I also wanted to remind him of the plans we have in Essex as he has agreed to speak at our meeting.  He’s a very good speaker and teacher.

I am particularly interested in what Chris has to say about the weather coming up this week as I will be making my way down the coast toward St Mary’s GA where she will be hauled till Brenda and I join her in early January.

As the warm weather of summer battles it out with the colder weather of winter, the big question is if there will be the northerly winds that we need to head south.  I really have no interest in banging my head against unfavorable winds, and am willing to wait for winds that will get us there quickly and comfortably.

Based on his preliminary assessment yesterday at the meeting, admittedly, without his computer models, he thinks that we will be able to get a window to head out around Cape Hatteras, mid-week to make out way toward GA.   This suggests that we should make our way down the bay toward Hampton VA  at the mouth of the Chesapeake Bay after the meeting today or first thing in the morning and wait a few days for the favorable winds to come through.

One thing that looks certain is that there is going to be a band of squally, nasty, weather in the waters off of Hatteras Tuesday and going out into the middle of that would not be a good idea.

At this point, the question will be if we should wait in Hampton and go out and around Hatteras, or if we should go in at Hampton,  make our way down the ICW, Intra Coastal Waterway, inside to Beaufort while the adverse conditions off of Hatteras work themselves out.   As that inshore route is protected,  we can do it even if the weather isn’t so great.  Outside, in the ocean, the conditions are exposed and it would not be a good idea to head out until things settle down.   The problem with the inside route is that we can only move during daylight hours, making the trip from Hampton to Beaufort a three to four day trip verses a much shorter offshore run as we can continue moving 24/7.

Such are the questions that I have to answer to be sure that we can make a good and safe run to GA from here, a run of about 600 miles and to get there in decent time.  My crew, Jim and Ken, whom have sailed with in the past, won’t be too keen on sailing aboard Pandora in the future if we have a nasty, unpleasant run.

To get the latest forecast, I will call Chris today on the phone and talk to him to get the forecast as he does not broadcast on Sunday.

Fingers crossed that things will play out as hoped and we will be on our way today or Monday.

Perhaps I’ll close with a nice shot of today’s sunrise to prove that it was pretty early when I wrote this.  What a peaceful spot to write. 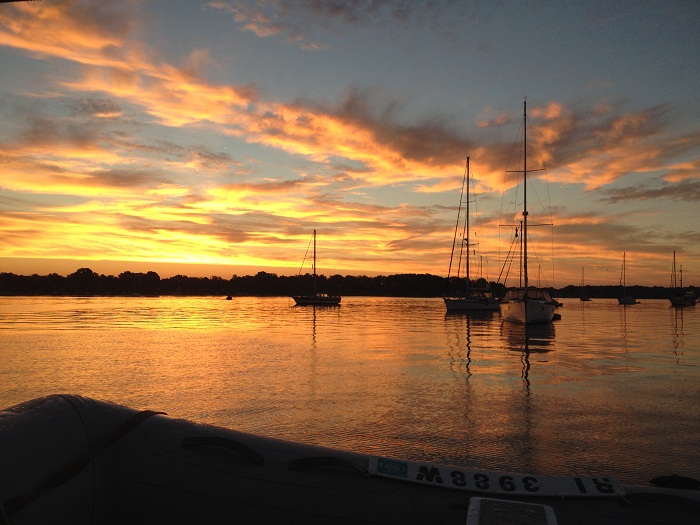 Oh yeah, I should also use the photo that Brenda took of me waiting for the train looking like a Sherpa.   Well at least like a serious “mini sherpa” ready to climb a large mountain.  You know, you can never have enough lines aboard.   I ended up replacing my main sheet and jib sheet with two of these. I was hoping that I looked mean enough to raise the conductors suspicion.  Alas, no such luck.  Well at least, if the train was to get stuck on a bridge I could have used them ro repel down to safety.  Yeah, right… 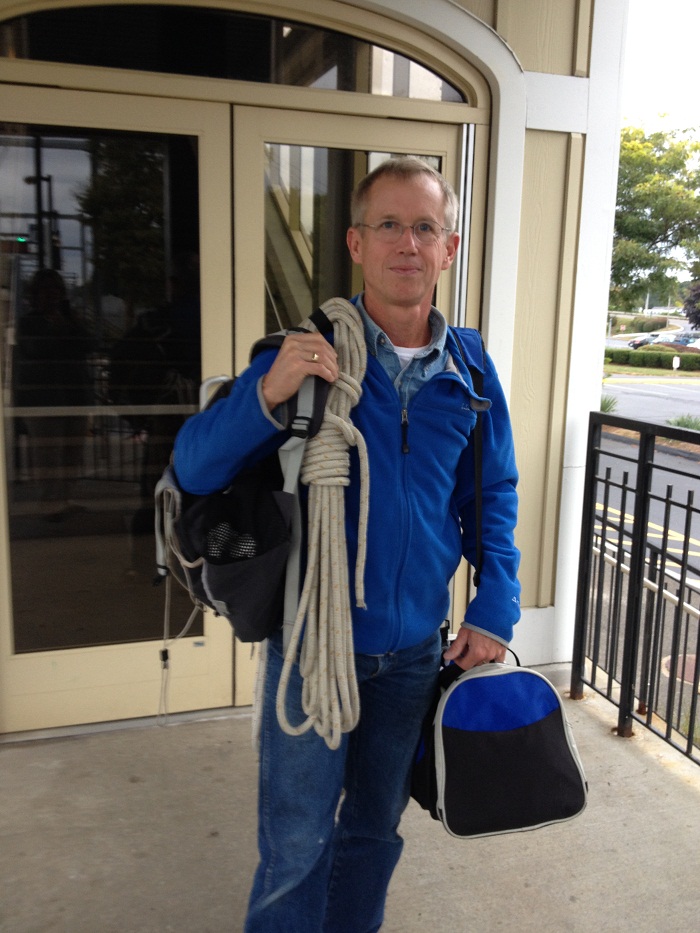 As always, I’ll be posting Pandora’s position on “where’s Pandora” as we wake our way down the coast over the next week.   I am optimistic that things will go well.