And now, time for a brief hiatus. Home for a bit…

It’s Sunday afternoon and I am aboard an Amtrak train headed from BWI to Old Saybrook and home. Today has been, to borrow a phrase, a “train, boat and automobiles” sort of day.  Thanks Jim for giving us a ride to the train.  A full service operation Jim is running for us.

Pandora’s in a slip in Annapolis at, my crew, Jim’s condo.  How convenient it is that he recently sold his boat.  Keep Pandora in a free slip and head home for a few days?  Not a tough decision.

Anyway, I had fully expected to just hang around in Annapolis for the week till the SSCA cruiser’s gam began on Thursday night, but when Jim offered the use of his slip, I thought it would be fun to head home and see Brenda.  She left a week ago for a weaving conference so the idea of waiting a few more weeks to see her after Pandora’s in GA didn’t sit well with me.

Our run from Essex to Annapolis was pretty much perfect. We sailed the entire way from Montauk all the way to Cape May and then motored the rest of the way to Annapolis.  It’s hard to wish for more.

The wind was behind us for the whole offshore run and blowing plenty hard to keep us moving well.  Pandora did well and kept her speed over 7kts with only a single reef in the main and no head sail.  This translated into 170 miles in 24 hours.  Pretty impressive.

The waves were pretty big and I am always amazed at how fast they build when there is any sort of wind blowing. However, with the waves from behind us, they didn’t feel anywhere as large as they looked.    They were pretty steep for a while and as they crested and rolled under our stern, I was surprised to see a few of them hit the transom and wash under the transom door and into the cockpit.  It’s a good way to rinse the crumbs out after all.

Amazingly, as we approached the entrance to the Delaware river in the wee hours of Saturday, the wind clocked to the east which made it easy for us to begin our run up the river.  As the wind was opposing the ebbing tide, the seas were a bit lumpy but they quickly smoothed out as we headed up toward to the canal.

After an ocean transit, it was wonderful to enjoy a quiet motor ride up the bay.  I had not gotten much sleep on the run down but was happy to catch some sleep as Roger steered up the river.

The canal is so smooth and comfortable, a welcome change from the bumpy ocean. 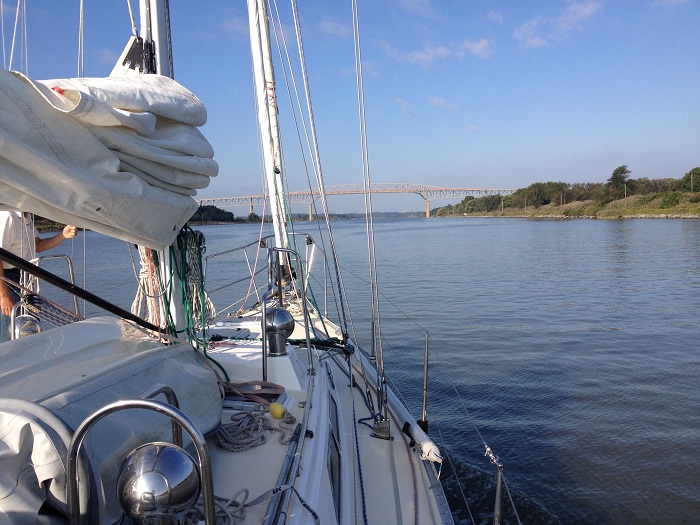 We stopped for the night in Chesapeake City, a favorite of mine.  It’s a lot of fun to go ashore for dinner after a few days aboard.  Roger, Jim and I had a nice dinner out.  I have to tell you that it was a hopping town with loads folks on small boats coming and going for drinks at the local Tiki bar on shore.  We stopped to take a look and decided that a drink aboard Pandora would be more our speed.  I wonder how safe it is when they head out after drinking to blast down the bay on their “muscle boats” that can go 50MPH.   Can you say “legal limit”.  I don’t think that there are many sobriety stops on the water.

Speaking of “sobriety”, I made up a few delicious rum punches for Pandora’s crew that we enjoyed very much.  I even got a shot of the sun setting on my own punch.  Don’t the colors work well together?  I had to take the shot quickly before my ice melted.  Such problems I endured. I guess that this qualifies as a “rum selfie” if there is such a thing. 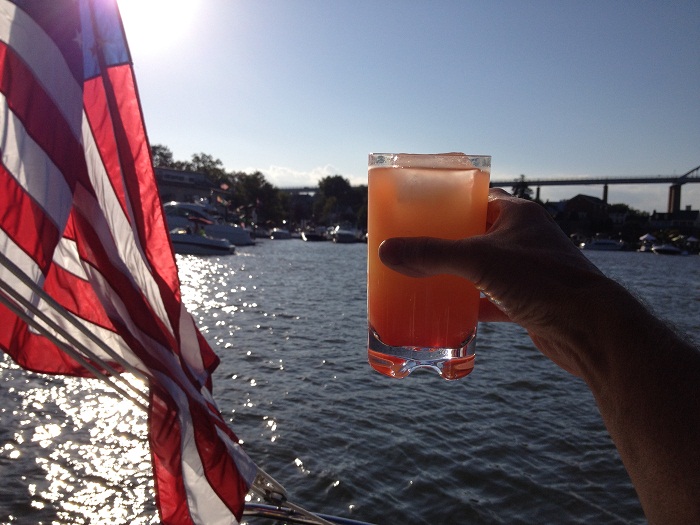 After a good night sleep, and some of Pandora’s famous fresh biscuits, we made our way down to Annapolis.  Mission accomplished.  Pandora’s ready for the gam.  Then, on to Georgia where she will be hauled for a rest while Brenda and I do some traveling and enjoy the holidays with family.  We’ll rejoin her in GA in early January.

An added bonus of coming back to CT for a few days is that I can visit my mother Shirley who’s turning 85 this week.  Happy Birthday Mom!!!  See you soon.

Aren’t I a good son?  I won’t talk about the 4 months that I’ll abandon her this winter while Brenda and I are south on Pandora while she’s up in the frigid north.  Hmm…

Home soon to see Brenda again.  Did I say that it’s been a week since I have see her?  Such are the busy lives of the retired.

One response to “And now, time for a brief hiatus. Home for a bit…”