It’s Wednesday morning and I need to dash off this post so I can hit the road to go shooting with a good friend of my late father.  Shooting skeet was a favorite pastime for my dad and to shoot with Milan, one of his best shooting buddies, will be nostalgic.  It wasn’t that long ago when the three of us would shoot most Wednesdays.   Well, today will be fun too, as it’s been quite a while…

Anyway, as I was gathering up dad’s shooting gear which I will use at today’s outing, I thought that it would be fitting to write about another noisy pastime, firing the cannons aboard the Yacht Marie.  If you have not read any of my posts about Marie, the 180′ superyacht that Brenda and I sailed on a few weeks ago, I should mention that the owner Ed, LOVES antique weapons.  Aboard Marie there are a number of cannons on display as well as two mounted on the stern quarters that are fired REGULARLY.

When I say “often” I mean that Ed fires them whenever he has a “good” reason, and sometimes just because the mood strikes.  Good reasons include, but are not limited to, leaving the dock, returning to the dock, passing a boat or a resort on shore and finishing a race.  Of course, finishing a race, or better winning the race, calls for a “double broadside” or firing of both cannons together.

Well, when we were racing in the Newport Bucket Regatta, a few weeks ago, the “mood struck” often.   The first time we heard Ed holler, “fire in the hole” was as we were leaving the dock for race one.  Everyone instinctively covered their ears (the “ladies” were issued earplugs of course) and BOOOM!!! the cannon “spoke”.

These cannons are not the little sort of “pop-guns” that you hear at yacht clubs shooting 10ga blank shells at sunset.  These babies fire custom packed 8oz charges of black powder packed in aluminum foil packages.  For fun, I asked Rich, Marie’s engineer, to guide me through the process of preparing the cannon for firing.

The first thing that Rich does is get out is the “charge”.   It’s an 80z prepared slug of black powder wrapped securely in aluminum foil and rammed down the barrel.  I don’t know how much explosive force that much black powder has exactly but let me tell you, it’s plenty LOUD and it spits out a very satisfying cloud of white smoke.  Anyway, I am getting ahead of myself.

Here’s Rich patiently posing for me.  Note the foil “package” in his hand. That’s 8oz of black powder that provides the “business” portion of the cannon. Caution:  No open flames!!! 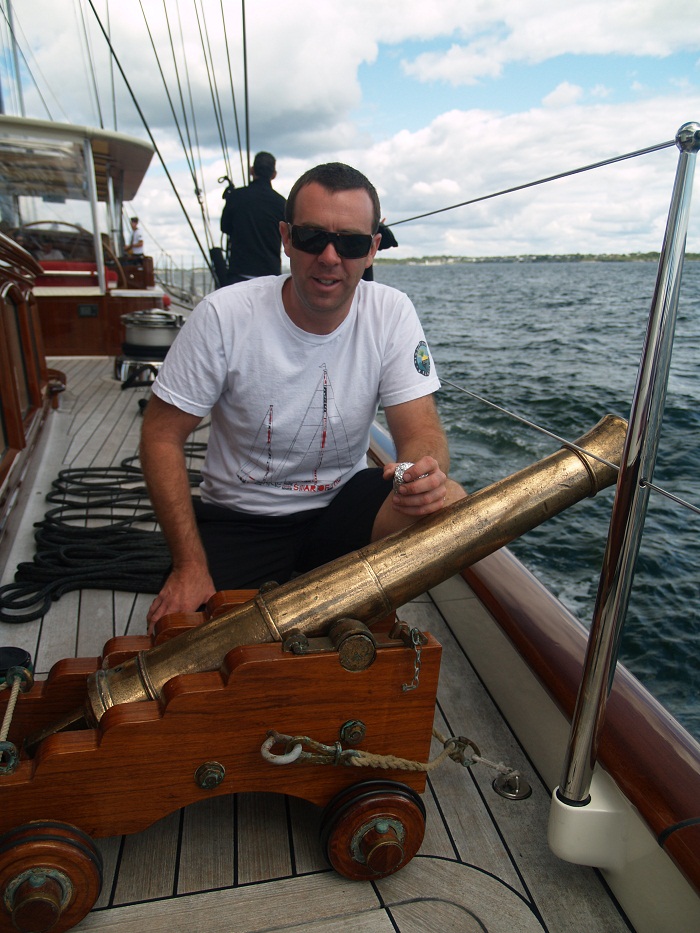 Ramming the charge home to be sure it’s well packed into the bottom of the barrel. 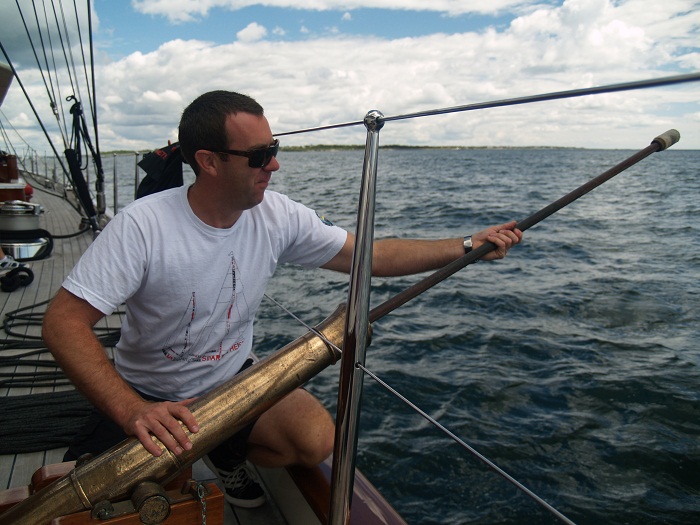 Next, Rich jams a narrow metal rod into the priming hole at the back of the cannon.  This allows him to pierce the foil in the charge. 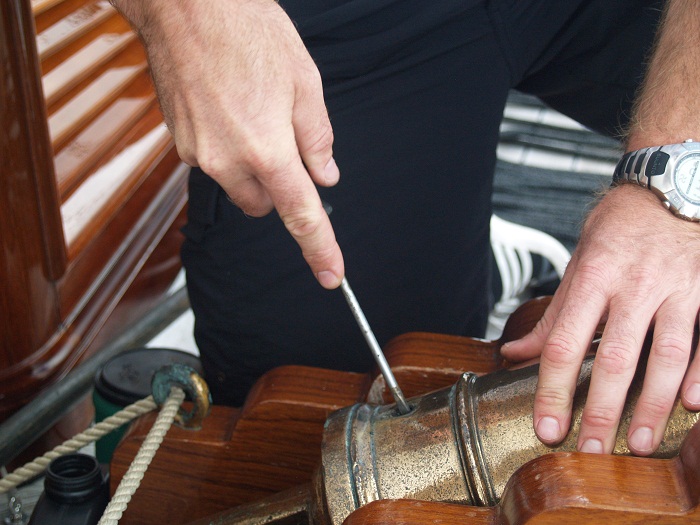 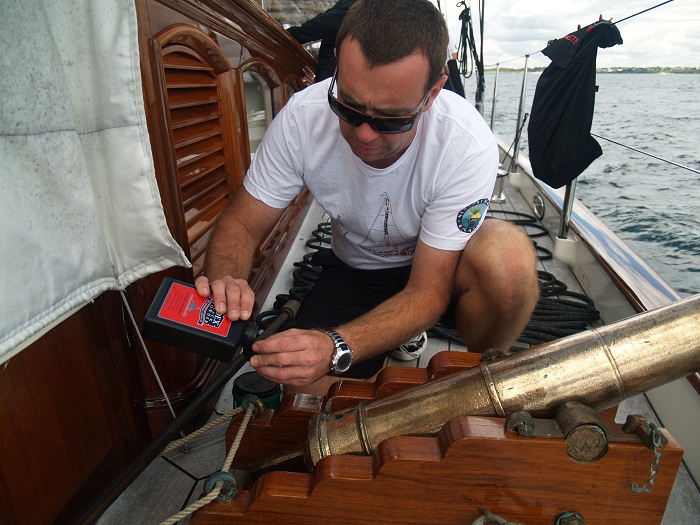 Next, he pours a cap-full of powder into the priming hole. 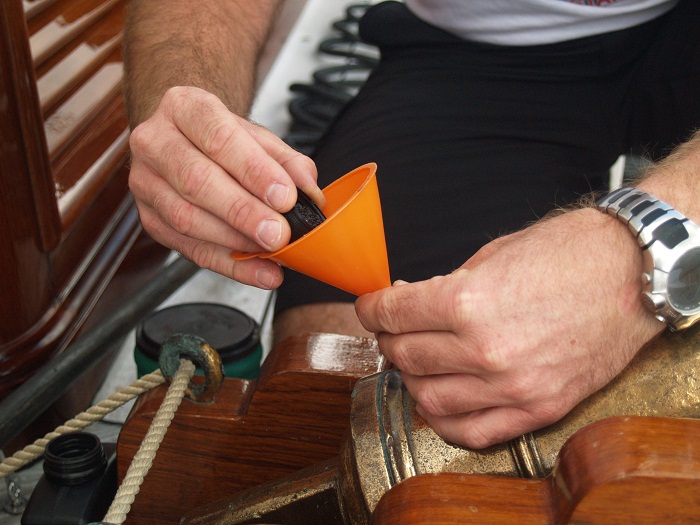 Then,  he fully packs the priming into the hole to ensure that there are no gaps that might lead to a misfire. 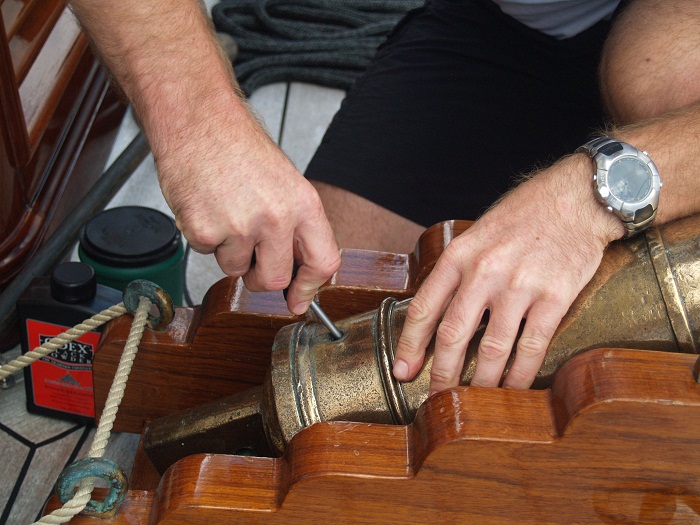 Finally, a “primer” is placed into the hole.   The “primer” is a small brass tube with a flint, sort of like striker on a match.  Note the little wire loop on the primer.  A lanyard is clipped to this so it can be pulled from a safe distance.

When this is deformed, or pulled, the flint gives off a spark which lights a small charge in the tube. This “spark” ignites the powder in the primer tube and, you guessed it, BOOOM!!! or should I say BOOOM!!! 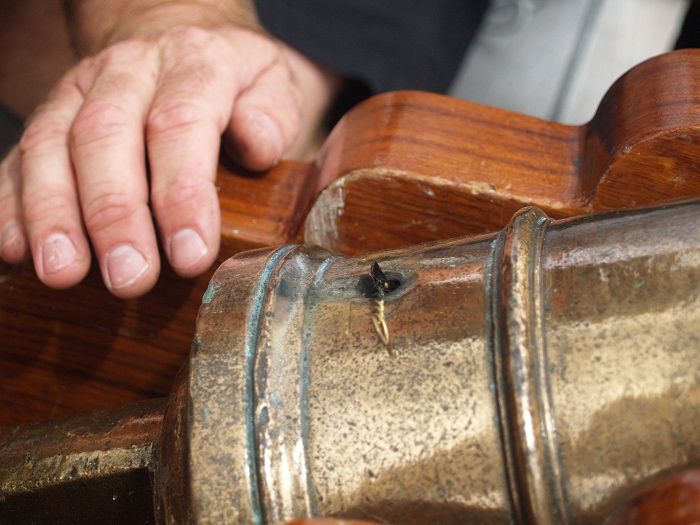 All set!  All that’s left is for Ed to bellow, loud enough to be heard from one end of Marie’s 180′ deck to the other, “fire in the hole”.  Oh yeah, Rich, closest to the “action” dons a good set of ear-muffs himself.

Yank the cord. and yes, BOOOM!!!  Of course, there are the occasional miss-fires.  Not to worry, Ed has TWO cannons, so there’s always a backup.

So, there will always be a terrific BOOOM!!!  Sometimes they are fired in close quarters, like in this shot.  I’ll bet that the neighbors really appreciated the attention. 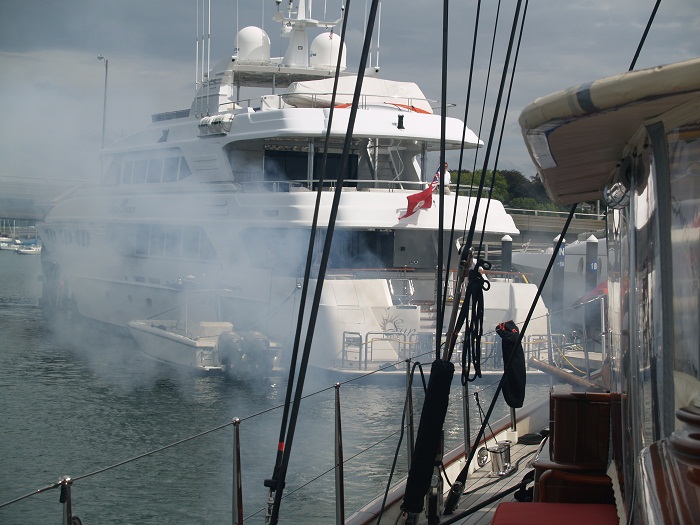 Other times he fires when Marie is “at sea”.   I am not sure that his little foiling sailboat aptly called  a “moth” would fare well against Marie and her cannon. 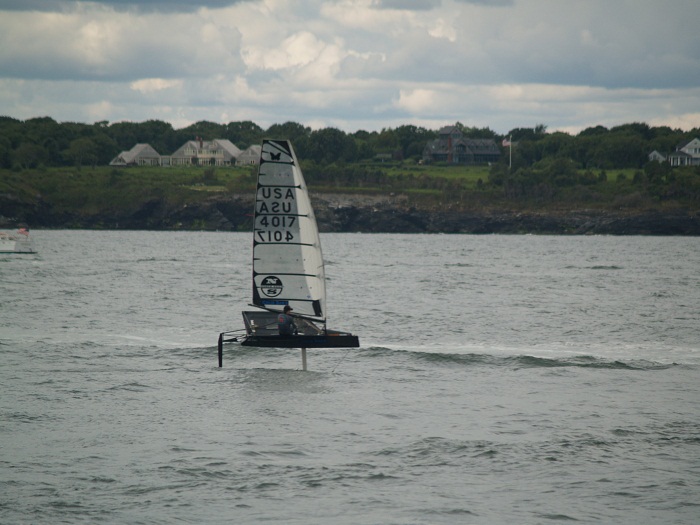 Interestingly, these little boats are REALLY fast and when they get going they rise up on hydro-foils and scoot across the water.   I’ll bet that they are tough to sail but a real thrill if you master the technique.

I wonder what the FAA would think of a surface-to-air cannon bombardment from Marie toward this helicopter?  Probably a pretty dim view, I would expect. This little red chopper circled around Marie quite a bit taking pictures.  Hey Ed, want to buy a photo of your boat?  Take this…”fire in the hole!!!” 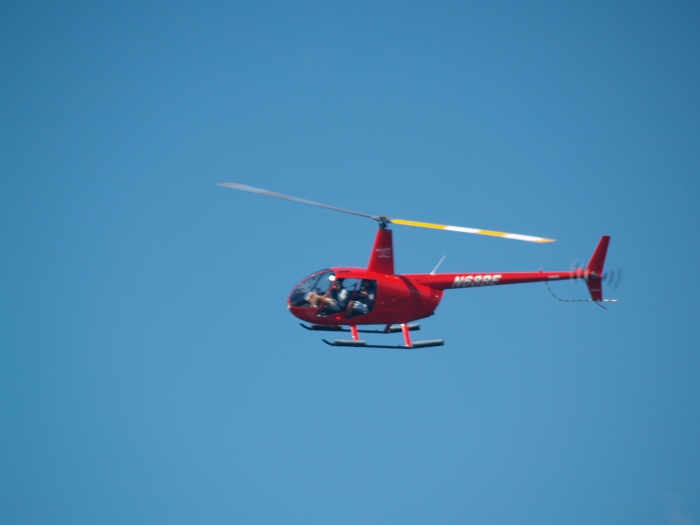 This stately yacht might be a cause for a “salute” from Marie.   What a lovely vessel.    She looked right at home in the waters off of Newport. 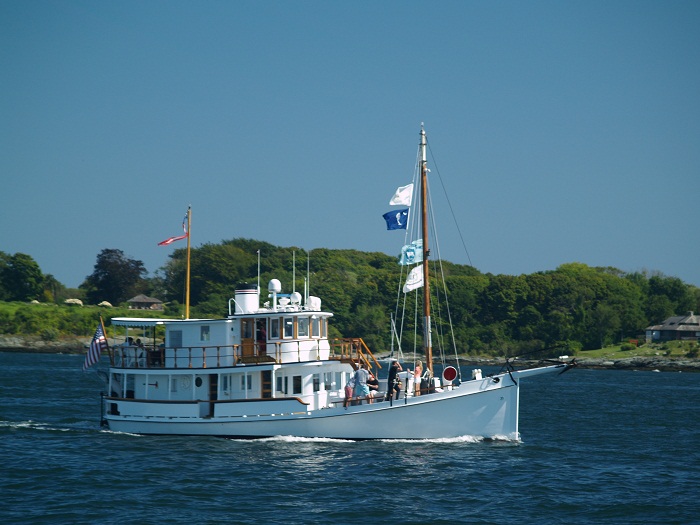 All and all, I can’t think of any pastime that goes quite as well with sailing as firing cannons.  And, it seems that Ed has the resources, combined with a teenagers love of LOUD NOISES, and the cannon to make the best of both,  to “puncuate” his outings in a way that makes his point “loud and clear”.  What fun.  I LOVED IT!!!

Yes, today is a good day to go out and make some noise shooting skeet with Milan.  I am sure that Dad would have approved, and would have liked Ed’s toys too.

I guess that Boys will be boys on land and on sea.