After a really amazing trip down the New Jersey coast Pandora is now in Annapolis.  Actually, as I write this we are in “historic” St Michaels, the home of the Chesapeake Maritime Museum, which we plan on visiting today.

We have rented a slip near a friend’s home in a creek near down town Annapolis for the month of October and November.  After that I will have Pandora hauled for a few months in a local yard to have some work done on her, namely the repainting of the mast which has been pealing.  Unfortunately, the mast wasn’t properly primed when the boat was built so the paint hasn’t adhered well over 10 years in the weather.

With the long Columbus Day weekend we decided to visit Annapolis and take in the Boat Show, a must visit for anyone who loves sailing.  It’s a great time to connect with old sailing buddies and to meet new friends.

We had lunch at the show with our friends Keith and Rose on Camelot, another SAGA 43.  While I spent a day at the show I am pleased to say that I was good and didn’t buy much.  I did get the newest book from Jimmy Cornell a well known author and crusier who has written an overview of his many years afloat.  Jimmy autographed my copy for me which was a treat.

Just North of Annapolis are a pair of bridges crossing over to the Eastern Shore.  Impressive structures and really massive at over 4 miles long each.  I took these photos last week as we passed under them while approaching Annapolis following our run down the Jersey Coast.  It will take a lot of tolls to pay for these guys. 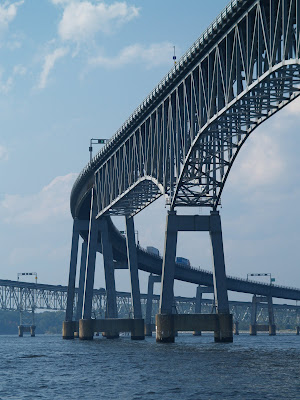 It’s hard to imagine that there is enough paint and manpower to keep such a massive strcture in fine shape. 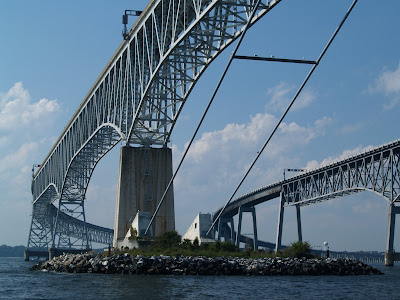 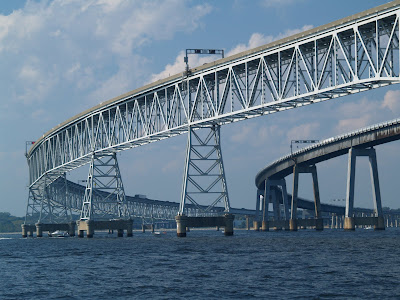 Last evening we had drinks aboard another boat anchored near us in St. Michels.  There were three couples aboard including one Frank and Gail aboard their SAGA 43 Alcid.  Interestingly, Alcid passed us last week when Pandora was tied up at the town dock in Chesepeake City.  Frank and Gail live in Maine but have spent the last 6 sailing seasons sailing in Europe, much of it in Turkey, Greece, Spain and Croatia.  Their boat is very thoughtfully laid out with all sorts of nice touches and very neat and tidy.  Frank and Gail are retired and spend about 9 months a year aboard and are a fountain of information about cruising.  The other two boats in the raftup were a small 25′ powerboat that had been trailored up from Georgia and a Sabre 38 from Annapolis.  Interestingly, wjat the three skippers had in common was that they had know each other since grammar school.  How great to keep in touch for so long and there they were, rafted up in this great harbor. 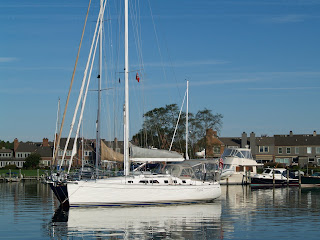 We hope to see Alcid again soon and hope that our paths will cross again in the spring when they are again headed north for the summer.

Well, I’ll sign off for now as Rip has to go ashore and we have lots to do.  It’s a beautiful fall day and we have plans to visit a food store, knitting store for another project to keep Brenda in stiches and we’ll also fit in a visit to the museum.   First thing first, Rip’s getting anxious.