It’s Thursday morning and I feel compelled to write something.   Especially since I woke up at 4:45.  Why, why, did I have to wake up that early?  It wasn’t even light yet.  Not a bird chirping.

Oh well, I am awake and I haven’t been aboard Pandora for a week.  And it will be at least another week till I return to New Bedford to head out again so anything I post will have to be about OPB (Other people’s boats).

So, what’s there to write about when I am just an “armchair sailor” for a few weeks?  I have to say that still feels a bit odd to me to be mostly landlocked during the summer these days after so many years of summer sailing with the boat “on the hard” for the winter.  However, life’s not too bad as I do spend nearly 6 months on Pandora these days, just not the summer part.

However, being aboard full time when the weather turns nasty here in CT (That would be ALL winter in my book.) is great and I am already thinking about moving Pandora south this fall.

Speaking of south, it looks like I will be running Pandora to Georgia in late September after the fall Annapolis SSCA (Seven Seas Cruising Association) gam.  And, I’ll likely leave Pandora in Brunswick for a few months till I return to her in early January to run her down to Miami.   I say GA because we can’t put her south of the FL/GA border prior to November 1st due to insurance requirements.  The rub is that we are planning some travel from mid October to mid November so Pandora will have to be settled prior to the time that it’s ok to move her to FL.  Anyway, in GA she’ll be until I return in January to take her the rest of the way to Miami.  I  expect that the temps in GA in January will be a bit on the chilly side compared to south FL.    However, it should be better there than here in CT by that point.

For now, I’ll just have to think about those folks that are sailing this summer while Pandora sits patiently on her mooring up in New Bedford.  Happy to have access to my friend Patty’s mooring there.

I guess that I will have to satisfy my sailing needs vicariously for the moment and I know of no better way to do that then to do a bit of perusing of videos on YouTube.    Yes, that site has something for everybody.  No, make that thousands of somethings for everybody.  Well, at least for me.

So, what’s interesting?  How about mast walking?  Now there’s an idea.  I have been up Pandora’s mast plenty of times, most recently to check out a problem with the VHF radio antenna which needed to be replaced.  And I did it the old fashioned way, in a bosun’s chair.  Brenda pulled me up using the power winch.  I can tell you I was gripping the mast with my legs, plenty hard. Here’s what it looked like from deck. 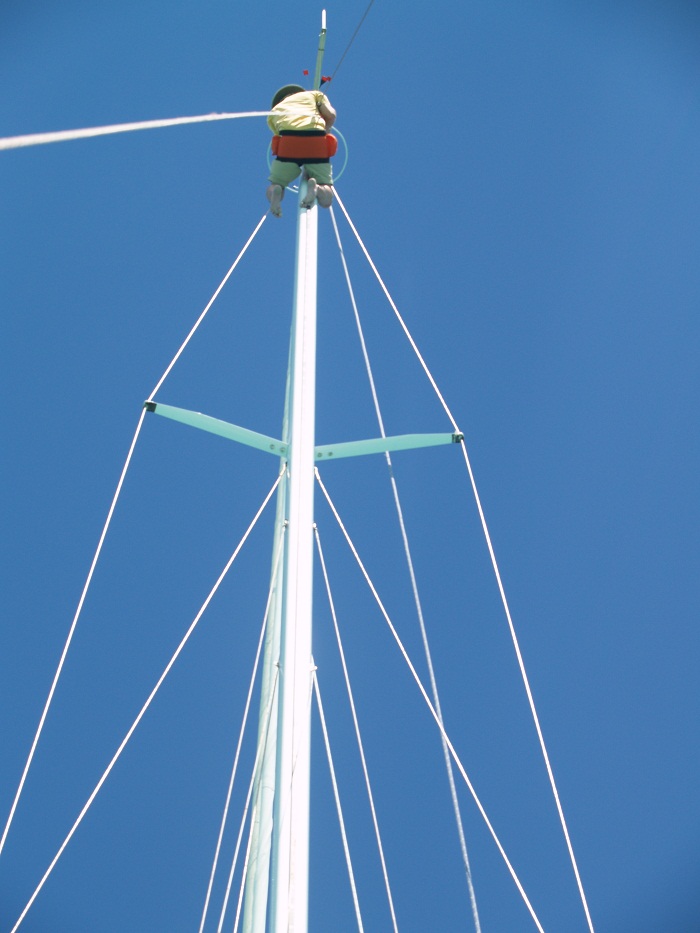 However, it seems that there are other ways to get to the top of the mast, especially if you have a thirst for adventure.   How about this as a way to the top?The “walker” is Alex Thompson,  the skipper of Hugo Boss, a round the world racer.   This video has been viewed nearly 1.5 million times on YouTube.  Not a bad promo for the Hugo Boss fashion brand.  Besides, Alex looks quite natty in his suit, doesn’t he?

So, what about me as a mast walker?   Hmm…  My first thought… I like my of getting to the top better.  My second thought, and it only took a second? Brenda wouldn’t be on board EVER AGAIN if I pulled a stunt like that.  As my son Rob would say, “Dad, quit it with the CLMs with Mom”. (Career Limiting Moves) Well said. For a girl that likes “being anchored” as her favorite part of sailing, I am thinking that heeling Pandora over at 50-60 degrees would be low on her bucket list.  No, not her first choice, not at all.

Even though it’s old news, our buddy Alex walked on his keel a few years ago. Interesting yes, but not as neat as walking up a 100′ mast. This one has had 2.4M views. He looks a little younger in this video but that shouldn’t be a surprise as he’s sailed around the world on that boat since then and that sort of punishment would make anyone a bit grayer around the ears.

Speaking of things that make you look older.  Here’s an interesting piece about Alex and his competition in the Vendee Globe, a round the world nonstop solo race.   Imagine doing this sort of race for three months, without a break.  Not for the faint of heart.  Some, like Brenda, might say “not for the normal”.I guess that Hugo Boss is getting their money out of that relationship.

So, as Pandora sits quietly on her mooring up in New Bedford I’ll have to get my sailing in through videos on YouTube and there are plenty more where these came from.

I guess that’s about all for now.   Have to get on with my day.  Fortunately, the grass isn’t ready to be cut.  A few more days till I have to do that again.