It’s Thursday and I am back home after a short trip to New Bedford MA for a few days.  My friend Burt and I sailed Pandora from the CT River to Stonington and then on to New Bedford.

Happily, we were able to sail much of the way with good winds and covered a lot of distance in just a few days.   Interestingly, as we passed Newport RI, home to lots of mega-yachts, we were passed by the yacht Marie, a 181′ Vitters built beauty, on her way to Booth Bay Maine.   Vitters builds world class megayachts and mega,mega yachts.  Check out their site for a “sight” of some of their projects.   These yachts are “toys for really big boys”.  I know this boat through Dr. Bosarge, the guy who I wrote about in my blog last summer.  And it was that post that led to our being invited to his Bahamas island, Over Yonder Cay.

It seems that Brenda and I will be sailing on the yacht Marie this summer as we have been invited to sail on Marie and visit Dr. Bosarge’s home in Booth Bay.  Now, that should be a fun time. He wasn’t at Over Yonder Cay when we visited there so it will be fun to actually meet him in person.

Here’s link to a series of photos of Marie.  What a boat.

Speaking of sailing yachts, we left Stonington CT at 05:30 on Sunday with very light wind and as we headed east toward  New Bedford, we spied this lovely schooner.  She was, no doubt, headed home from the Wooden Boat Show that had been held in Mystic Seaport over the prior weekend.  Very pretty lines. 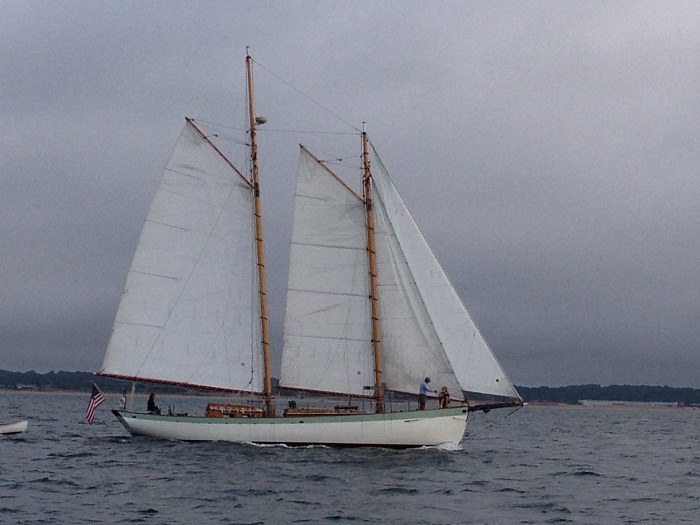 Seeing her was getting me in the mood for seeing the Morgan in New Bedford, following her refit at the seaport.

So, as we headed east the wind piped up and as we entered Buzzard’s Bay and were into the final stretch, the wind was gusting into the low 20s.  It was a brisk ride.  Along the way we ended up sailing on company with an Oyster 59, a much bigger boat than Pandora.  I was thrilled that she wasn’t able to pass Pandora in spite of being a dozen feet longer.   No, it wasn’t a “race” but any time two or more sailboats are near each other, IT’S A RACE.  You know how it goes, try to make the boat go as fast as possible while looking like you aren’t trying at all.  “Oh, that boat.  I didn’t see her…”

Anyway, we made covered over 50 miles under sail on our way from Stonington to New Bedford at a nice clip and picked my friend Patty’s mooring for our visit.   The next day we headed ashore to see the Charles W. Morgan, who had her “homecoming” to the harbor for the first time since she was an active whaling ship a century ago.

New Bedford harbor is an amazing place with what seems like hundreds of fishing boats tied up at docks in every corner of the harbor.    This shot, from on top of the Whaling Museum, gives you a good feeling for how many there are. You can see the lightship Nantucket, in her distinctive red paint,  in the distance. 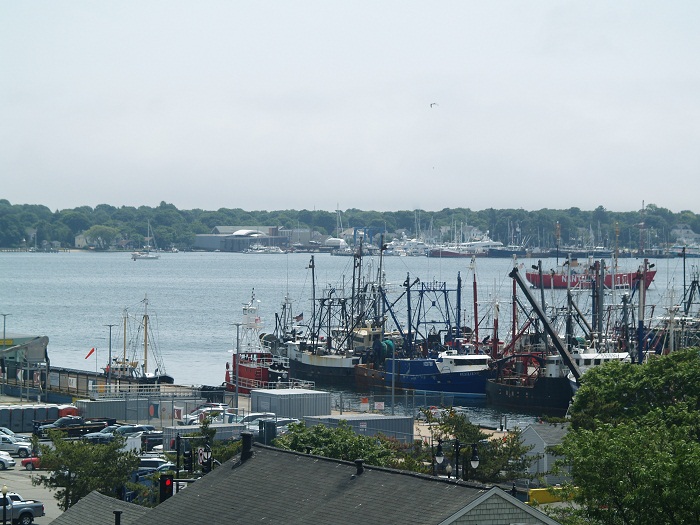 The Nantucket, has been around since the 50s and was only retired by the coast guard from her station off of Nantucket, in the mid 80s.  She was anchored off of the SE corner of Nantucket for many years warning ships of the shoaling waters that run 30 miles out to sea that have claimed hundreds of ships over the years.   And, about the Nantucket, if you have an hankering to have a lightship of your own, she’s been recently refitted as a yacht and is for sale.

As if that’s not enough, you’ll never have a problem finding a place to drop the hook as she carries her own 7,000 lb mooring on her bow. How about that for self sufficiency?  And to be sure you are seen, there’s even a locomotive headlight on her bow. Who needs AIS, or radar for that matter, when you have a gazillion candlepower light to let everyone know where you are.

Interested?  Check out the for sale listing here.  She’s clearly a show stopper. I wonder what sort of mileage she gets. Brenda always says that her favorite part of boating is being anchored. Perhaps Nantucket would be the perfect boat for her.   Looking pretty smart in this “glamour shot”. 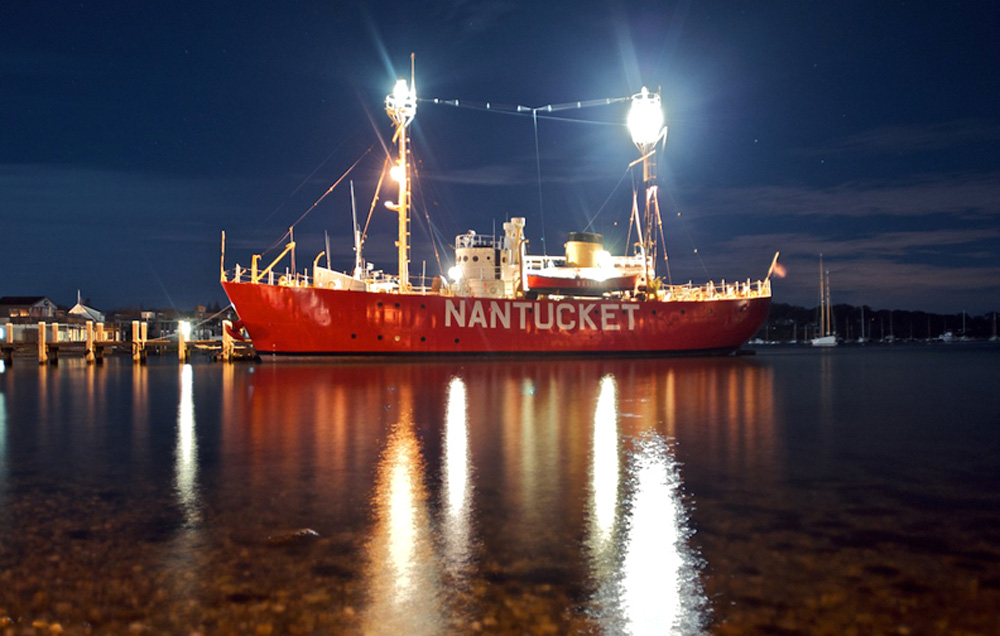 The interior isn’t too shabby either. 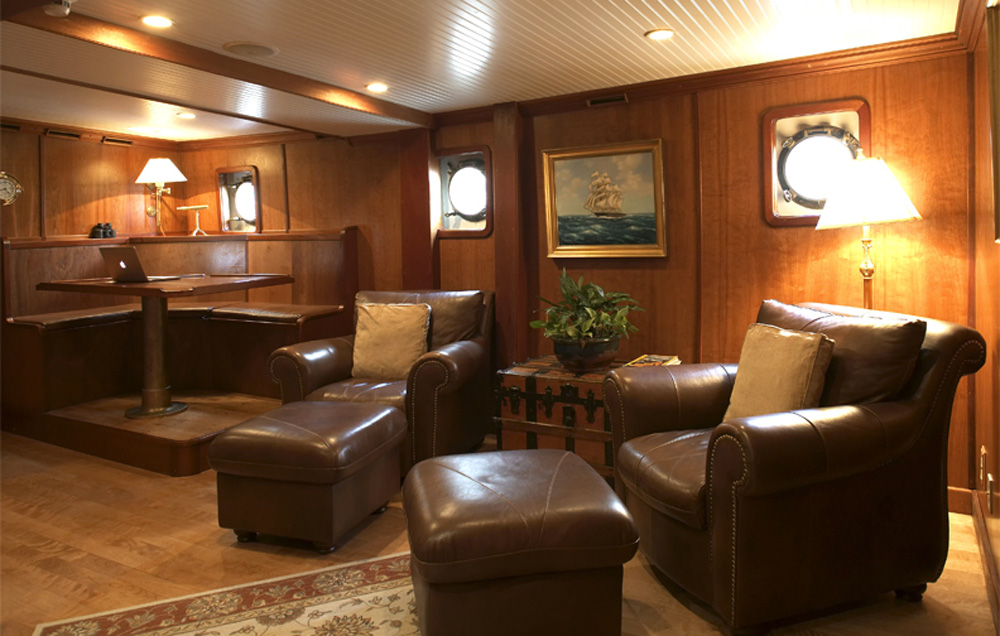 Setting aside the Nantucket, everywhere you look there are fishing boats.  I’d think that it has to be tough to make a living when your boat is tied up at the dock.  With the restrictive quotas imposed on fishing boats these days, It must be a very difficult way to make a living.  And, as my grandfather used to say “you can’t catch fish when you’re lure isn’t in the water”.  Or, perhaps more to the point, “you can’t catch fish if you aren’t fishing”, and given the number of boats in the harbor, they aren’t catching many fish right now.   In spite of this New Bedford still lands more seafood in total dollars than any other port in the US.  It seems that the success of the scallop fishery is one of the reasons that New Bedford is on top as a fishing port.

Here’s a tour of a modern scallop dragger.  What a machine.  And, if you’re interested, here’s a video of a scallop dragger from 1951. What a contrast.  Today’s boats are huge compared this.  I’d imagine that one of the reasons the modern boats are stuck at the dock is that they are just so efficient that to let them out every day would destroy the fishery in a few years.   So much for modern innovation.

So, heading back in time, the Charles W. Morgan, the last surviving whaling ship from another era and another fishery. She had her “homecoming” to New Bedford where she sailed from in the 1800s.  She’s been at Mystic Seaport since the 40s and has recently undergone her most extensive refit since she was launched in 1841.

Yes, I’ve seen the Morgan many times over the years, but always as a static museum ship.  And,to see her now, fit for sea, was a real treat.  Perhaps the most amazing thing of all was to see how much manila line she has on board.  The literally miles of cordage that comprises her rigging is a sight to behold.  To me her lines look like spun gold. Beautiful.  Here’s her mainmast splendidly draped with cordage. 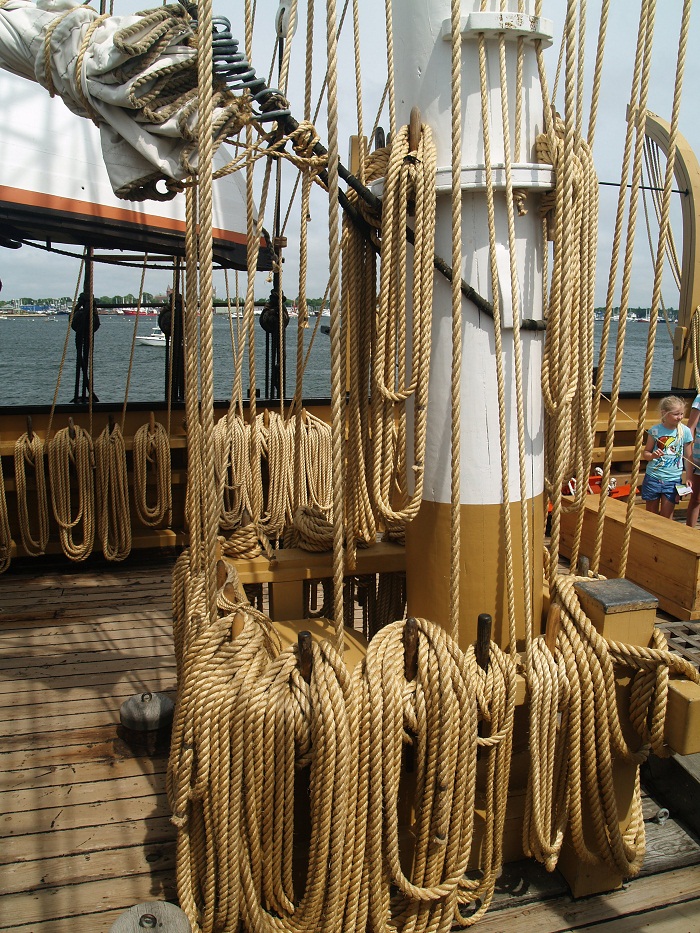 And, to look up to the sky.  Not sure I’d want to climb up there. 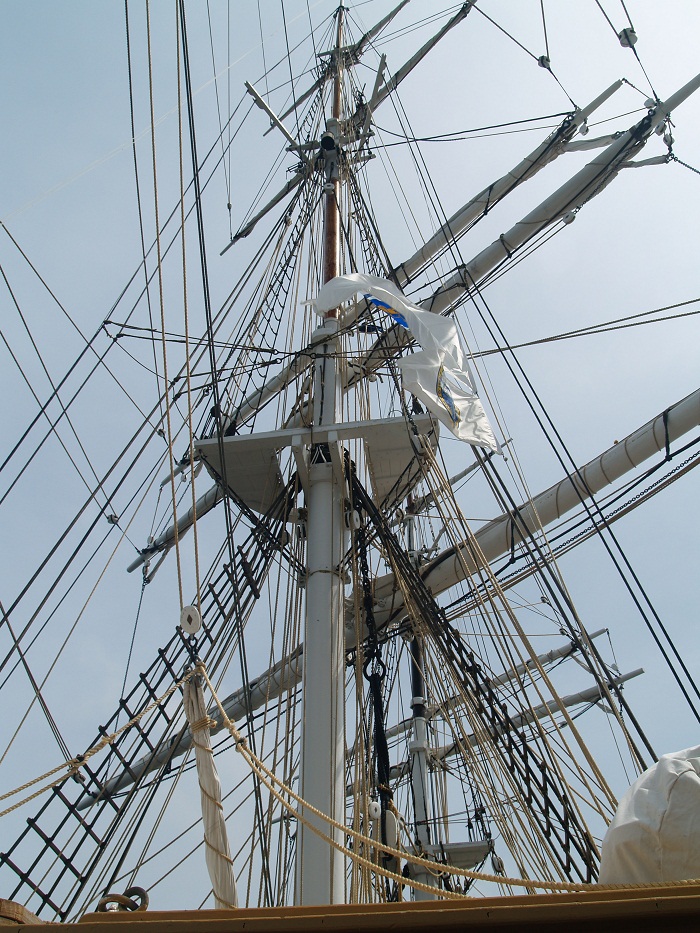 She looked lovely tied up the pier.  I guess that when you are talking about a ship, they are tied up to piers and not docks. 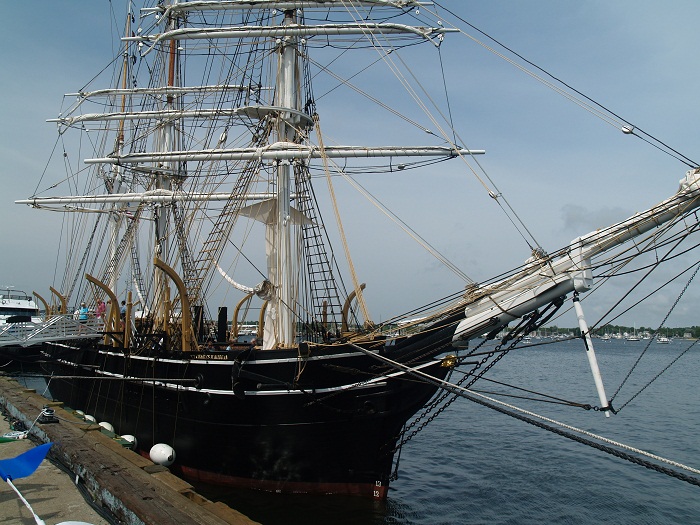 Even the dock that I tied up my dink to had a great view.  How about this for contrast?  Whale boats and rubber boats, all nestled under the bowsprit of the Ernistina, an old fishing schooner. 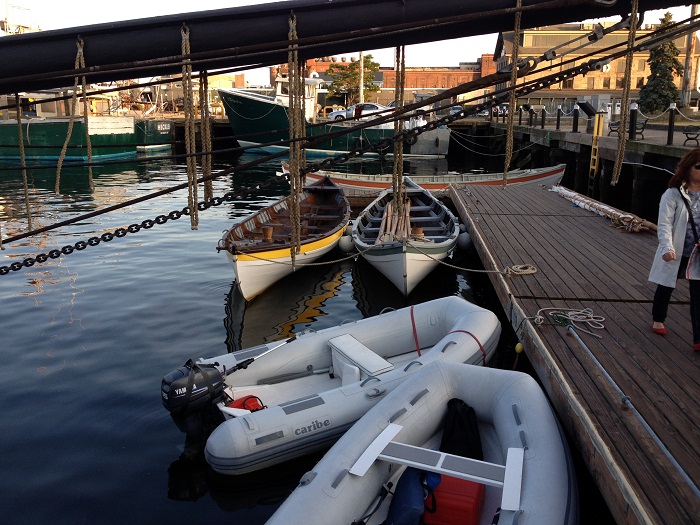 I liked this view even more.  However, don’t try to head out into the harbor in a 9′ boat when one of the “big boys” is getting underway. 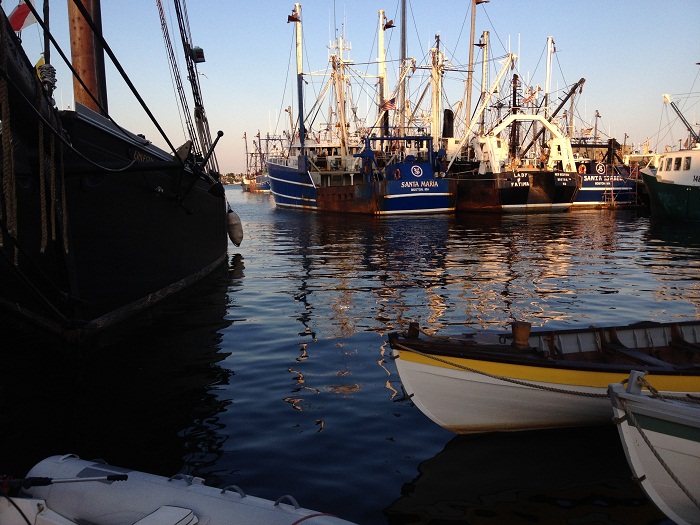 New Bedford has EVERYTHING.  And speaking of rubber boats, they even have a rubber whale. This would look so great in my front yard.  Perhaps it would cut down on the amount of lawn I’d have to mow.  That would be good.  Have I mentioned that I have a BIG lawn?  Thought so. 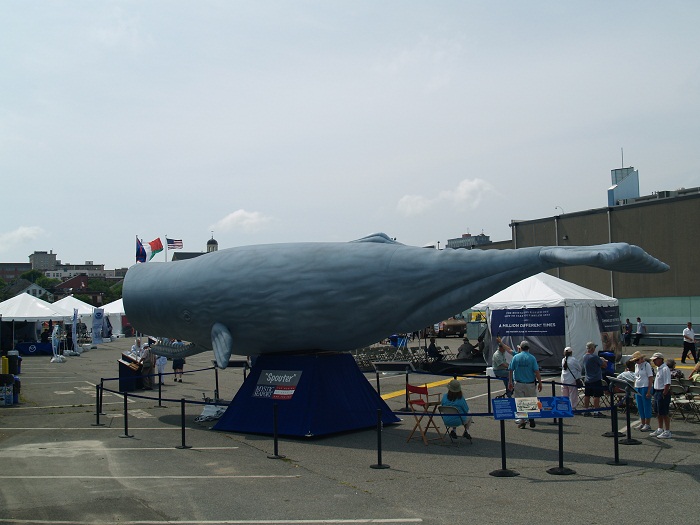 And, if you want to learn more about whales the New Bedford Whaling Museum is a must.  It’s been recently renovated and expanded.  And, of course, one of the original displays in the museum is a half scale model of the whaling ship Lagoda, some 65′ long, a successful whaling ship that sailed from New Bedford. The model was built in 1916 when the museum was founded.  I’ll bet that it’s the largest ship model in the world.  Is there a bigger one? 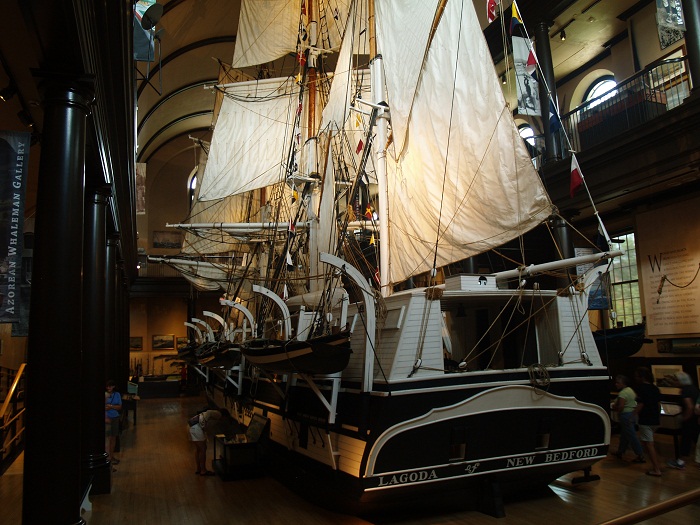 On a serious note, fishing offshore is a dangerous business and many mariners have lost their lives over the centuries while plying their trade.  And in New Bedford, there is a chapel, the Seaman’s Bethel, that has plaques recognizing the ultimate sacrifice that many have made when heading out to sea.  This sanctuary has a very unique pulpit shaped like the bow of a sailing ship.  It is said that Herman Melville drew his inspiration for Moby Dick from New Bedford and this chapel.    It sure looks the part to me. 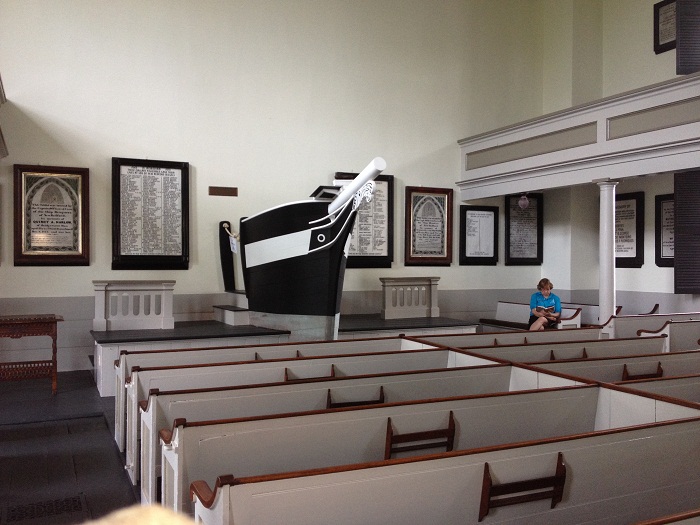 The building has been beautifully restored. 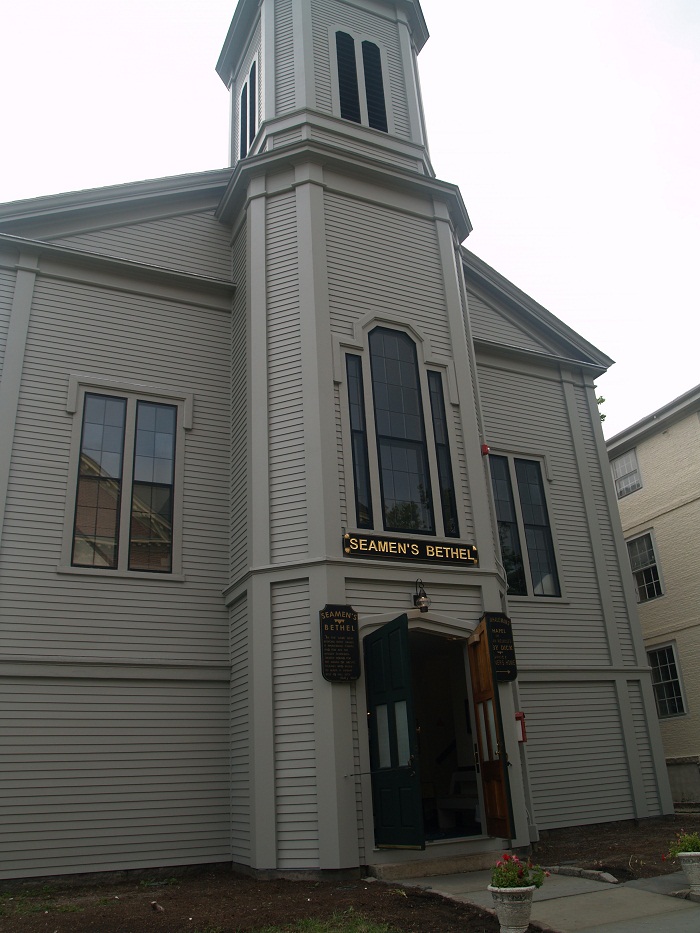 Anyway, Pandora will be in New Bedford for a bit prior to my bringing her to Narraganset Bay for some cruising with Brenda. Perhaps we’ll take a few days to run back there to see the sights as New Bedford is indeed a wonderful port to visit.

Did I mention how big my lawn is?  Well, it’s big and the grass needs to be cut so I’d better sign off and get the mower out.

I’d rather be sailing, or visiting New Bedford…

One response to “Charles W. Morgan, in fine sailing trim in New Bedford”