It’s Wednesday morning and I awoke to a view of the lighthouse at the entrance of the CT River and the estate of the late Katherine Hepburn.   If you are wondering, it’s still for sale.  Interested?  Not sure?  Check it out here.   Perhaps I’ll make a run down there later in the week to see if the place would be worth the $30,000,000 they are asking.   Looks pretty nice from my vantage point. 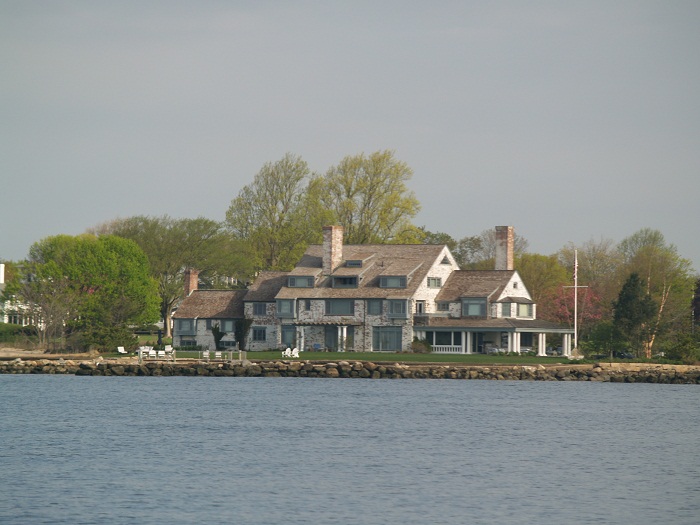 And a nice view of the lighthouse at the entrance to the CT River. 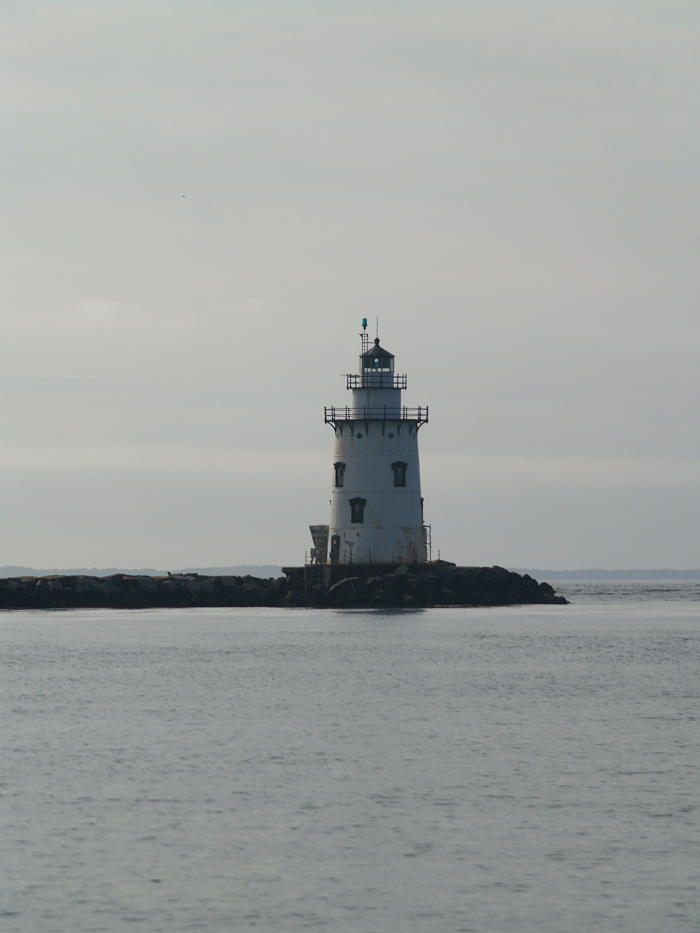 You might be wondering how I found myself anchored off of the entrance of the CT River so early in the morning.  Well, after spending the yesterday tied up at the dock at the Norwalk Yacht Club, I decided that I would take advantage of the outgoing tide and make the run down last night toward Essex and home.   Besides, I took a long nap at the dock yesterday afternoon and felt quite rested. Well, as rested as one can be after being underway for the last week from Nassau.

After nearly 1,200 miles I couldn’t stand the fact that I was a mere 50 miles from my goal and sitting on a dock.   So, I dropped the lines and got underway.

The primary reason I was waiting at Norwalk YC was for the strong easterly winds to die down and as evening approached that’s exactly what began to happen.   While the winds were pushing to twenty, with higher gusts, during the day, they began to drop prior to dark.  Unfortunately, they didn’t end up dropping as much as I had hoped but did so enough for me to make progress.

As the ebb tide gained steam, my speed over the bottom increased so I was able to make good progress with peak current pushing me along at over 2.5kts.   That might not sound very fast but the 5.5kts that Pandora was moving, combined with the push of the current, we were tooling along at nearly 8kts, in the dark… And, I was alone onboard as I had said goodbye to my crew earlier in the day.

Believe me, as I threaded my way past shoals and reefs, in the wee hours of this morning, I felt like I was on a runaway train.

So, at around 03:15 this morning I dropped the hook just behind the breakwater for the CT River and headed right for bed.

I awoke to a brisk 54 degree cabin at 07:00 to the sound of Pandora’s boom creaking in the cross swell coming around the breakwater.   No, it might have been the feeling of my cheek hitting a 50 degree pillow.   Anyway, I woke up.

It’s very calm now and I could have waited till today when the wind was lower to make the final run to the CT River but I would not have had a fair tide as I did earlier this morning.  And, in this area the tide really runs hard.

By leaving last night, I was able to enjoy the push of the ebb and now I can catch the morning tide flood up the river and on to Essex.

Well, the tide is running  up the river now so I’d better get going.  I also have to check into Cruiseheimers SSB radio net and let them know I have arrived home safely.

And yes, Brenda’s going to meet me at the club to give me and Pandora  a proper welcome home.Yup, time to go as  time and tide wait for no man.   It will be good to be home.