Oops, not there yet.

It’s Tuesday and I am sitting on a dock at Norwalk Yacht Club in Darien CT.  Oops, I was supposed to be in Essex today.  Last night we stopped here around to drop Jim so he could take a cab to a train to deliver him home to VA.

The plan was to let him off and immediately continue east toward the Connecticut River and home.  However, As you can imagine, after being underway for a week, we were pretty tired.  So, I decided to anchor and catch some rest and head out in the morning to go the last 50 miles to Essex.  As we motored down the sound from New York, it was glassy calm so how much different could it be in a few hours?

Feeling pretty good about a nap, and an early start on Wednesday we dropped the hook for the night.  Well, at 04:00 I was awakened by the sound of wind rattling the rigging and the wind blowing about 20kts from the east, THE EAST, exactly where we would need to go.    What happened?   I thought that we had listened to the NOAA weather report and they said the south with a shift to the east but not right away.  Somehow I missed the shift to the east thing.

Well, just in case it wasn’t as bad as I feared, we got going by 05:30 and motored out around the point only to see, first hand, that we could make little progress motoring into 20+ apparent wind.   I should note that the forecast called for 5-10 from the east,  a lot different than 20 with gusts.  What do do?  After a week of moving toward our destination, I was very reluctant to stop and ditch the boat for a few days and take a train home.

Besides, after making great progress for 1,000+ miles, to abandon Pandora so close to the “finish line”  didn’t set well with me.

As we motored up the Sound from New York last evening it didn’t even occur to me that the expected front would be felt here so quickly.  Last time I “looked” it wasn’t coming till tonight or later.  Oh well, as they say, “If you don’t like the weather, wait an hour”.  Let’s hope that applies in a good way too.

As Wednesday’s weather calls for light easterly winds, perhaps I’ll just hang out here and clean up Pandora a bit from months away from a dock in the Bahamas and, not to forget, a week of sailing offshore.

Perhaps a nap first?   Quick, call 911 Bob’s taking a nap in the middle of the day.  So much for my Protestant, New England upbringing.  It’s practically a “school day”.

Before I break, I’ll include a shot of the NYC newly renovated clubhouse.   From our 15 years of membership, I know that these improvements were a long time coming.  Nice result… 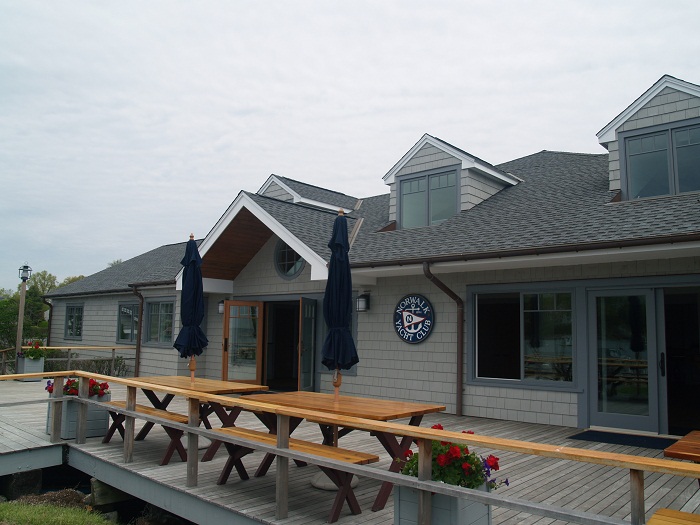 Perhaps if I wait an hour, the wind will calm down.  Ever hopeful…

Oh yeah, it’s not even a little bit “Bahamas Balmy”  How about low 60s?  Now that’s going to take a bit of getting used to.

2 responses to “Oops, not there yet.”