Into the final stretch and entering New York… Nearly home

It’s Monday morning, biscuits are in the oven and the sun is peaking over the eastern horizon.  It’s a good day aboard Pandora.

Last night was uneventful as we motored past the Chesapeake Bay and Delaware River.  As the moon set we were passing Atlantic City.  Let me tell you, you can’t miss it as the rest of the coastline of NJ is black at night.  Atlantic City, not so dark.

We have spent much of the time since rounding Hatteras under power as the wind hasn’t been strong enough to sail.  The light wind we have been experiencing, or “not experiencing” as it were, is a result of the whole area being under the influence of a high pressure weather system.  However, along with bringing nice weather, the “high” has brought very light winds and the motor or “iron wind” is purring away, keeping us on the move.   As my dad used to say, “that’s why God invented engines”.  And, happily, we have one of those to keep Pandora moving along when the “wind don’t blow”.

It looks like we will be rounding Sandy Hook, and entering the lower harbor of New York late this afternoon and will enjoy a fair flooding tide to carry us up through the harbor, the East River and into western Long Island Sound.  It will be good to be back in “home” waters after so many months away.

I left CT way back in late September to begin my run south, going from Essex to Annapolis.   It seems like another lifetime.   Given the winter that everyone experienced up in CT, I am so thankful that we were somewhere warmer.  I don’t like the image of myself being found frozen stiff with one hand clutching a bill from the oil company as I tried to make my way back inside during one of the many storms those who were tougher than I endured over the last few months.

Our plan is for us to stop in Norwalk CT late this evening so that Jim, that’s “crew Jim”, can get off the boat and catch an overnight train back to Williamsburg VA.   That works well as I can drop him at Norwalk Yacht Club, where I used to be a member.  Getting a cab to the train is very convenient from there.

Before Jim jumps ship, I think I’d better post a photo of Pandora’s crew, Jim and Rich, who gave up a week of their lives to help me bring Pandora home.  Thanks guys.  I made sure that both Jim and Rich cleaned up as best as they could to sit for this photo. Looking a bit shabby?  I guess it’s the best they can do after being underway aboard a small boat for a week.  Well, they were at least well fed if now “well cleansed”.    Please don’t read into the “arm around Jim thing”.  It’s not what it seems, really.   Pandora’s a happy ship but not that happy. 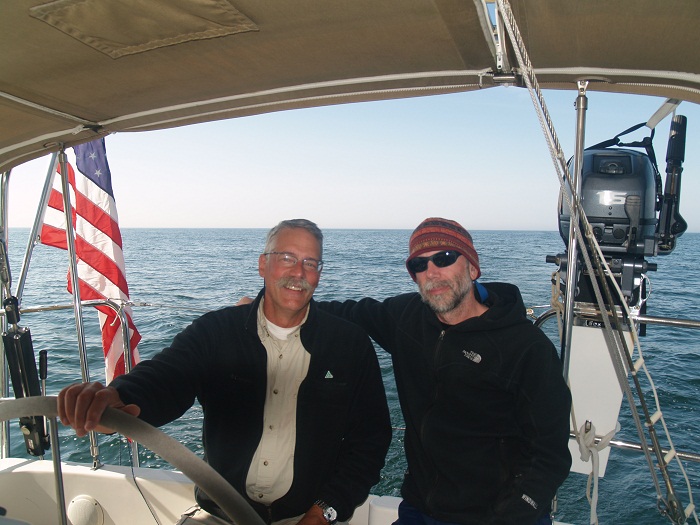 After dropping Jim in Norwalk we’ll likely take “nap” and get going at first light to resume our run down the Sound for the short 60 mile run to Essex and home.  It’s funny to think about that run as “short” as I have made it so many times over the years.  Back in “another lifetime” making a run of that distance would have seemed like a lot but after putting some 4,000 miles on Pandora going down to the Bahamas and back , since September, a 60 mile run seems pitifully short.   Funny how perspectives change.

It’s been a great run for the last week from Nassau even if the last few days have provided less wind than I would have liked for sailing.  Romping along, with all sails flying, is certainly better than motoring for hours, no make that days, at a time.

I guess that expecting to spend a week on the water with fair winds the entire time is probably asking too much.    Even more important than the question of “wind or no wind”, is that what wind there has been was behind us for the entire time.  That’s good.  Sailing down wind is vastly more enjoyable, that’s for certain.   As is often said, “gentlemen do not sail to windward”, and I agree.  Bashing into the waves is not my idea of fun.  I’d much prefer to “have the wind at my back” any day.  Or, to put it another way, downhill is easier than uphill.

I am really excited about being home after so many months away.  To that point, even such as little thing as activating my phone so I can make some calls and check e- mail was quite a thrill after months of having those basic conveniences well, not so convenient.   I won’t talk about how many calls to tech support at Verizon that took.  All better now.

Another thrill, and I am easily amused,  is putting up this post myself with that much coveted Internet access via my phone.   Brenda has been terrific about posting for me over the last week but it’s so convoluted to write the post, send the file over the SSB radio so that Brenda can log into my site and make the post.   Today, just log into my site and post.  Instant gratification!!!

It’s so funny how addicted we, well at least me, have become to being “online” 24/7 over the last few years.  Me?  I love it and am thrilled to have “instant access” again.

It was great to be in the Bahamas enjoying sun and warmth while others were up in the “frozen north”.   However, with all that hedonistic stuff came many “hardships” such as limited access to FaceBook.   Pitty me?  Perhaps not.

Anyway, I am happy to be nearly home and can’t wait to cut the lawn again.  Did I mention that we have a BIG lawn?  Ah, the smell of freshly cut grass…  I am sure that the thrill of dragging out the mower will wear off soon enough.

Of course, there’s always next winter to look forward to.

I suppose that I should close with a photo of the little guy that joined us a few days ago and camped out in the head.   Alas, sniffle sniffle, he didn’t make it and was buried at sea.  Perhaps if he’d sampled some of my cooking it might have turned out differently.    I guess I’ll never know… 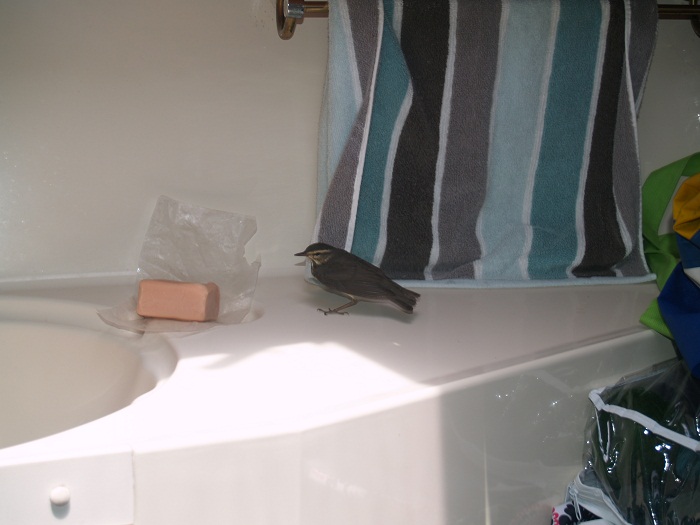 OK, OK.  Thanks, I needed that.  He really was a very cute birdy…

That’s all for now…