When less is more, in the wind department at least.

It’s Saturday morning and, FINALLY, the wind has settled down.  After a few days of winds in the 20s and all the bumping around that comes with that, it’s wonderful to wake up to what feels, by comparison, like a gentle zephyr.  I listened to Chris Parker, the weather router again this morning at 06:30.  That’s pretty early and I have to say that I never thought that I would be setting an alarm each day I’m aboard.  I thought that alarms were a work thing…  However, Sunday Chris is off so I can sleep in tomorrow.  I’ll probably wake up early anyway.   Such is the trials of being a cruiser.  Feel sorry for me?  My brother Bill’s response might be something like “Shut up.  Are you F&^%$#@ nuts? It’s snowing here.”

I won’t think about that for now.  Did I say that the wind is less today?  Yahoo!!!  We were beginning to think that that the wind was NEVER going to drop to a reasonable level as it has been one front after another for the last two months that we have been in the Bahamas.  However, it seems that there’s light at the end of the tunnel as Chris said this morning that the coming week should be BEAUTIFUL with winds in the southern Bahamas from a reasonable direction and in the 15kt range with no major fronts likely to penetrate this far south. That’s good, very good.

With that in mind, it looks like we will be heading east to Thompson Bay Long Island on Sunday afternoon or Monday morning.  After that we will likely head southwest to the Jumentos as I talked about in yesterday’s post.

Today we’ll probably head back into town for a few chores and yet another visit to the BATELCO (Bahamas Telephone) store to try and sort out the problems of calling my mother.  She is the ONLY person I call that has a land line and for some reason I cannot get through to her number on my Bahamas cell phone.   Unfortunately, the BATELCO folks can’t seem to figure this out and we have tried everything to solve the problem.  For a while we thought it was the phone so I purchased a new one.  It worked in the store but not back at the boat.  Very frustrating.  And, to make matters worse, each time I try to call her and it doesn’t go through I still get charged for the call.

Anyway, such are details of the cruising life in a rural country.   Perhaps I am being punished for ditching my mother for a few months.  Hmm…

Speaking of traveling home to see my mother, I have been working on getting crew for the run from Nassau to Essex in May and after a month or so of corresponding with folks back in the States, I think I am about set.  As most folks have limits on the time they can be away,  I will likely make a crew change along the way, probably in Beaufort NC.  Last year I made the 1,000 mile run without stopping but this year I’d like to be a bit more leisurely about it as keeping Pandora on the run for nearly a week without a break is a bit tiring.   Perhaps I am getting old.  No, I prefer to think of it as “effort management”.   Yes, that’s better.

Well, the sun is up and getting higher and the day is getting away from me.  No exciting pix to share with you.   No, wait.  Here’s a nice shot of me and Brenda in front of the local beach bar when we visited last year.   Chat and Chill.  Now, doesn’t that sound like a “it’s the Bahamas mon” sort of place? 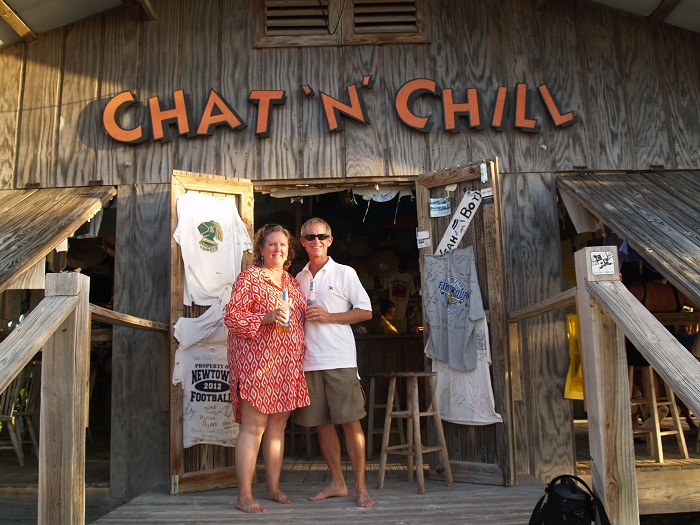 And a view from the bar.  Yes, a good spot to “chat and chill” from. 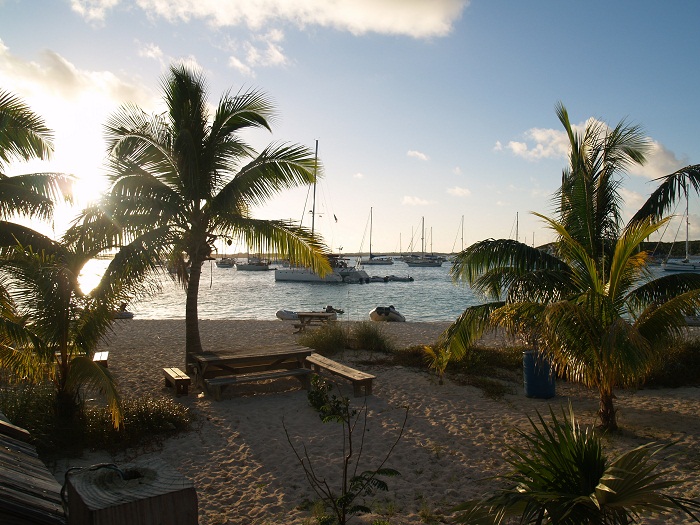 And, of course, there are some very helpful signs to be sure you know how far you are from just about anywhere.  That’s very comforting. 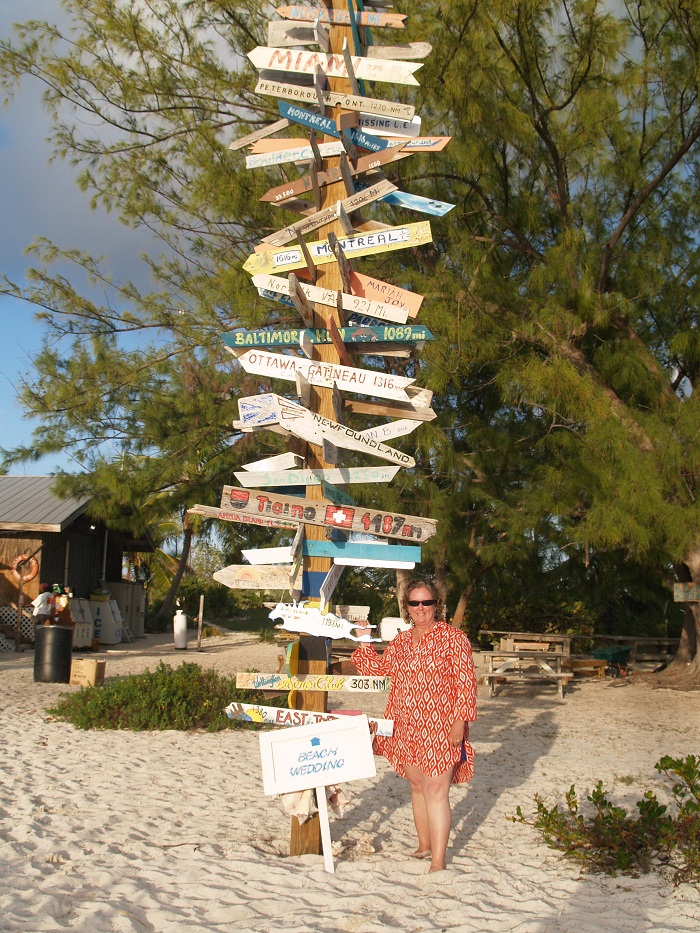 One response to “When less is more, in the wind department at least.”