Paper charts are dead! Not!!!

It’s Saturday morning and it’s laundry day here for Pandora in Black Point Settlement, Exumas.  You may recall that we were here a while back and I was raving about the terrific laundry and barber services of Ida.  Anyway, I won’t bore you with all that again except to say that we are looking forward to clean sheets.  No, don’t check back to that post to see how long it’s been since laundry.  We’re ready indeed.

Forgive the digression but clean laundry looms large.  However, the real point of this post is about getting around and paper and electronic navigation.  Sound boring?  Probably, but it’s my blog so there!

Some months ago “Active Captain” a well-regarded source of cruising information, announced that paper charts were dead and no longer needed due to the advances in electronic charting and the number of redundancies for onboard navigation.  I have to admit that I was skeptical at the time and really doubted that tossing out something as enduring as paper was a good idea.

On a personal note, for those that have been reading about our trials of getting around and staying in touch after the demise of our iPad, you may recall just how hard it has been for us to get this resolved.  Well, yesterday we finally received our new iPad after some three weeks of effort.  That’s a long time and once we had it in hand we spent nearly the entire day setting it up and getting everything reinstalled.  Happily, we are now “good to go” and all is back in working order.

What this whole effort has made me appreciate is the fragile nature of electronic devices.    One moment the iPad worked and the next…

I know that we are WAY over reliant on our easy-to-use electronic gadgets and have been so for many years.  However, I am happy to say that we were indeed able to get around without our electronic charts, using the good old paper chart books.  However, even with all systems functioning properly we have always keep paper charts handy and with “electro-problems” we really made sure that we were tuned into the paper world.

I have to say that when the iPad pooped, I was very concerned that we had become so reliant on electronics that would be stuck, paralyzed and unable to get around at all.  However, as it turned out, while we were slowed down, we were not stopped.  I found myself being much more aware of water color as a sign of water depth and I also did a lot of checking the lay of the surrounding islands against what I saw on paper with the hope that I was where I hoped I was.  Mostly, yes.

Anxious as we were, we did make it around fine so what’s the need for the fancy equipment?  Well, I guess that it’s more about confidence and comfort and knowing that we can double check what we think we see against what we see on the plotter.  Having electronic charts that show exactly where we are at any given moment is like having a “pilot” on board to validate what we see and provide reassurance that we are where safe and on the right track.  Winding between coral heads and sand banks takes real nerve when you are trying to do it without “real time” information from the plotter.  Yes, the water is famously clear but even though you can see the bottom most of the time, it’s still tough to be sure.  And, “almost right” isn’t quite good enough when you are at risk of crashing into a coral head.

What this process has reinforced for me is that the “old fashioned” paper is still great and surely not dead but that it’s just so nice to have an “extra set of eyes” from a plotter to confirm that “yes, Bob, you are on the right track, carry on”.

Another take away from all of this is that you can get anything you need in the Bahamas but that it might take weeks and cost a lot.   So, what are you willing to pay for peace of mind?  In the case of Pandora’s crew, plenty.

Yes, pictures are good.  While we were in Staniel Cay waiting for our packages to be flown in, we took some time to visit the pigs on nearby Big Majors Spot.  Yes, I have already posted about the local swine but wanted to show yet another picture of some of the little piglets. 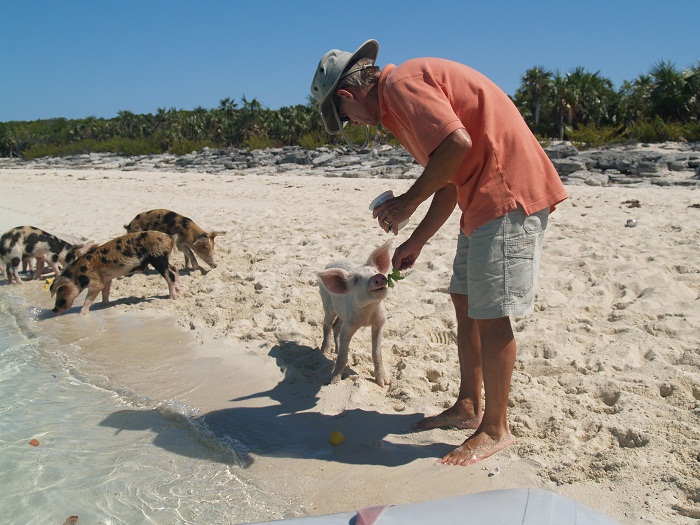 They were so cute, if a bit salty and sandy.  And, how I know about this is because I couldn’t resist picking up the littlest piglet.  But, first I had to choose one.  How about the littlest?   Here piggy, piggy…  Just a little closer… 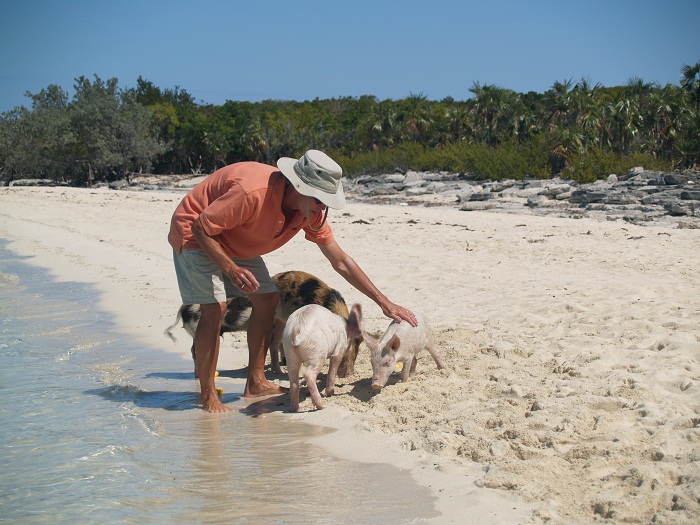 Gotcha!  He was fairly traumatized by the attention and squealed relentlessly in a very pathetic way.  I  was a bit fearful that mama was going to come to his rescue, all 600 lbs of her.  Happily, she wasn’t nearly that attentive.   He was very vocal and didn’t squirm at all as he was probably terrorized by the experience.  I preferred to think of him as “stoic” and just resigned to tolerating the indignity of it all.   Only the piggy knows… 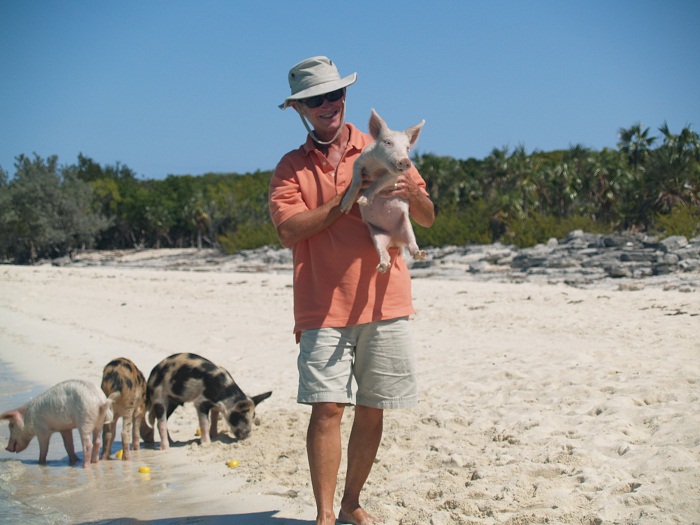 Speaking of local wildlife…  Every afternoon the folks at the Staniel Cay Yacht Club (actually it’s not a club at all but I won’t quibble) clean fish and lobster in preparation for dinner.   The food there is very fresh and pretty good actually, and the scraps go into the water to feed the local fish population.  Sharks and rays come in from all over to enjoy the feast.

In spite of being in a busy marina, the water is incredibly clear.  It almost looks like they are just laying on rock.  No, there is some 4’ of water.  Really, really clear. 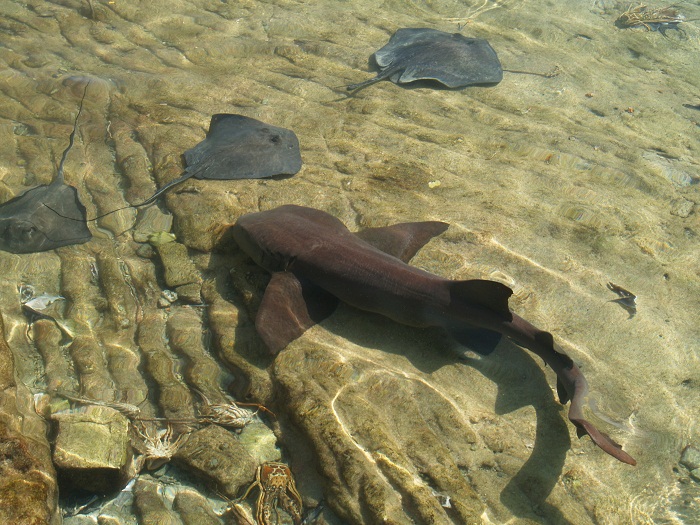 There was quite a crowd looking for dinner. 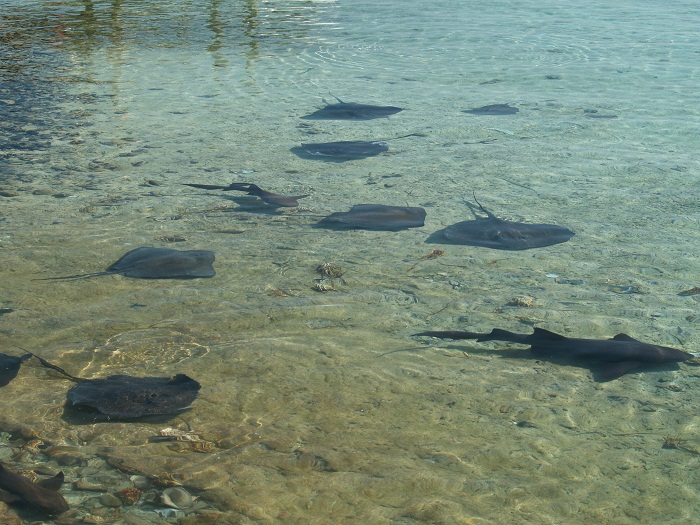 So, now that we are all set with our new iPad, after three weeks of waiting, we are again working our way south.  Today, laundry and tomorrow we will head further down the Exuma chain and get ready to dodge the next cold front that’s due to drive through the area next week.

Yes, another front and this one is now bearing down on New England as a major noreaster (is that how you spell it?  Not in spell check).  Glad we are not there right now.  What a winter they have had.  Yuck.  Me?  I’d much rather be here enjoying another sunny warm day.    Have I said that it’s sunny in the Bahamas?  And warm?  Yes, thought so.

With all our equipment back in order it’s a new day so what better way to sign off than with a shot of yesterday’s sunrise in Staniel Cay.  Yes, a great day indeed. 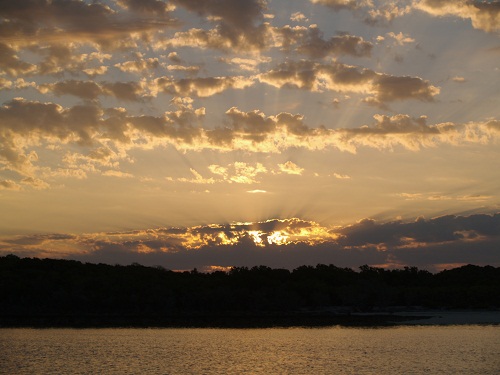 So, here I am finishing up on this post as our wash is swishing around getting clean.  The laundromat has free wifi too.  That’s Ida for you.  The best laundry and haircuts in the Bahamas and WIFI too!

And, of course, all this proves that paper charts are not dead.  Right?  No, not the best segue to end with.  Oh well.

Today there is a big barbecue at the local school here in Black Point.  And, we certainly can’t miss that.  Hmm…