And now for a moment of technical difficulty…

It’s Saturday morning and we are once again anchored near Staniel Cay.  On the one hand, I am not unhappy to be in what is a very nice spot having already been here twice this season.

However, we are still trying to get the problem with our “mort” iPad resolved.  If you recall, we use this as an important navigation device here in the Bahamas and having it die some two weeks ago has left us with no good backup and anxiety about getting around with confidence.

Yes, we have a plotter with charts as well as the paper chart books.  However, for close in work, in narrow channels, it’s nice to have the extra detail that shows on the i-Pad.

After a week of messing around with an order from Apple, we discovered that they won’t ship to a “re-shipper” and canceled our order.  The package was supposed to be mailed to an air-freight company in Ft Lauderdale and then to be flown to Staniel Cay in the Bahamas.  As we were receiving e-mail via our iPad, we were unaware of the cancellation until we saw their cancellation notice a week later, very frustrating.  Frustrating indeed.

So, we lost a week waiting for something to arrive that hadn’t even been shipped.  Ugh…
Now what?

First we scratched our heads trying to decide what the best option was.  Then we sent a note to our son Rob in MD and he agreed to order an i-Pad and to ship it to Watermakers Air Airfreight, the “re-shipper” that Apple wouldn’t send to, in Ft Lauderdale.  They run flights to Staniel Cay daily and can drop the package there for us.

Alas, it seems that it’s not that simple as I have been frustrated in getting them to respond to my messages.  Given the starts and stops of the iPad order, I guess that they have decided that this order has become too complicated and confusing.  Whatever the reason, they have not been very responsive and getting an answer from them has been spotty at best.

One way or the other, I am anxious to put this episode behind me and to get on with our run south to Georgetown and the southern Bahamas.

Yes, yes, I do realize that this sounds very whiny given the fact that we are sailing in some of the most beautiful waters in the world.  However, it can be treacherous making our way around without good charts.  Shifting shoals and lots of “hard stuff” to bump into make getting around here iffy at times.  That’s why we need to have access to good charts and a way to see exactly where we are.  And, the iPad app, Garmin Blue Charts, gives that.  Besides, having backups for key systems is critical.   I realize that we have become perhaps over-reliant on electronic charts, but it’s just easier and less stressful to use them than to rely on paper charts as the primary course of getting around.  I can do it but would prefer not to have it be any harder than necessary.

What I have learned from this exercise is that for some systems having a backup to a backup is important and that some who have called for the end of paper charts are just barking up the wrong tree.

Enough whining about charts for now and I hope that we will be back on track (chart wise) by next week.

Today is a beautiful day and we are expecting, yet again,  a front to hit us, albeit less powerful than the one we “enjoyed” the other day, to pass through here early next week.  With that in mind, we are headed back to Warderick Wells again this afternoon so we will be in a well protected spot when the wind veers west for a bit.

We should have a very nice sail this afternoon, even if this means heading north when we ultimately want to head south.  One way or the other, we will get a nice sail out of it and will still be fairly close to Staniel Cay to pick up our packages (Did I mention that we have packages coming to Staniel later in the week?  Thought so)

Anyway, perhaps I will close with a photo of us feeing the wild piggies near Staniel.  Actually, they look pretty wild from close up.  Ok, ok, they not so “wild” but they are piggies, never the less, and very close. 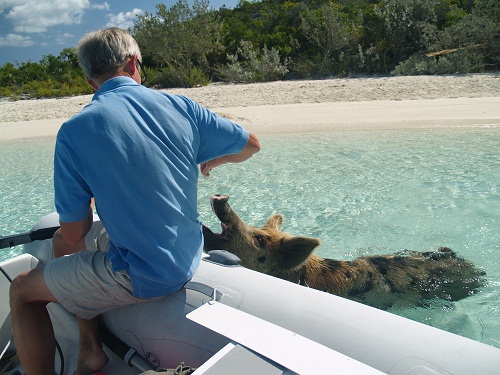 Here’s to hoping that we will be free to move on soon and have our navigation “issues” resolved, once and for all.  Fingers crossed.  No make that “piggies” crossed.

Oh yea, thanks to our son Christopher who has been posting these for me since we have been “Net-compromised”.  Thanks Chris!!!

2 responses to “And now for a moment of technical difficulty…”