It’s Friday morning and we are anchored off of a lovely little cay, Hawksbill Cay in the Exumas.   The wind has been howling all night long and it looks like the best plan for today will be to stay put for another day.

This morning when I went into the aft head I was greeted by a very alarmed gecko, a small lizard about 3-4” long.   As I picked up something from behind the water spigot this little guy jumped and ran for cover.  He ran up the wall of the shower trying to find somewhere to hide. 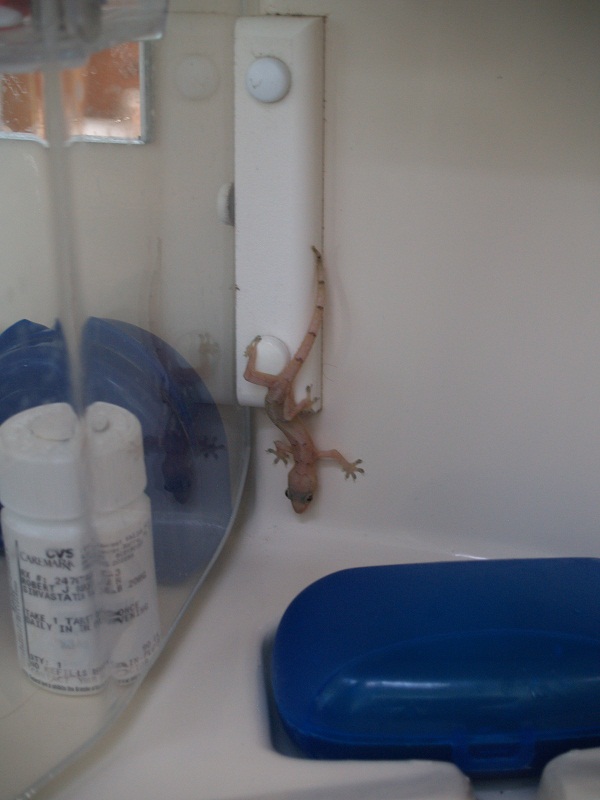 Unlike most lizards, geckos have little suction cups on their feet that allow them to crawl up slick vertical surfaces.

So, exactly where would a gecko find his/her way aboard Pandora?  I doubt that geckos swim and we haven’t been anywhere near land since leaving Nassau.  But wait, we were tied up to a dock for nearly a week in Nassau so he might have come aboard there.  Perhaps he came aboard in Ft Pierce where Pandora was tied up for several months.  One way or the other, he must have run along the dock and then did a tightrope walk along one of the dock lines to his new home aboard Pandora.

Well, as “stowaway” critters go, I can’t think of one that is more appealing to have aboard.  On the “less appealing” side, it could have been a spider (we’ve had those before), or a rat (now that would send Brenda screaming), or perhaps a roach or other nasty little bug.

To date on this trip, the only wildlife we have only seen on the good ship Pandora has been a few fruit flies hovering above a bruised tomato in the galley.   So, now the question is “what to do with our newest guest, Gecko?”.

As one would expect of a “girl”, Brenda has a strong opinion on the subject.  It went something like this…” I WANT TO TAKE A SHOWER AND I AM NOT TAKING IT WITH A LIZARD!”.   Well, I guess that about sums it up.  GECKO GOES!

Me, I’d love to have him become a permanent member of the crew.  Besides, he’d surely put a dent in the fruit fly population and so much easier than patrolling the fruit basket for signs of spoiled produce.  However, it would be a shame if we were to squish the little guy by accident.  Sitting on a gecko wouldn’t “sit” well with Brenda, that’s for certain.  Besides, Gecko is very little and we are so BIG.

Ok, so now that I have thought it through carefully and Brenda has hinted at her position on the whole thing I guess our friend gecko headed for shore.  Christopher and I found a spot, a sort of semi-damp microclimate in the middle of the island and let him go.

I do so hope that he is able to find other likeminded critters to be friends with.   Having said that, perhaps I will be arrested for importing invasive species into the Bahamas.  I sure hope that I didn’t upset the ecosystem too badly.  My guess is that Gecko won’t survive too long as it’s a lot dryer here than where he came from, wherever that might have been.

However, I did have to “liberate” Gecko as Brenda had made her position pretty clear and, as far as pets on board, I had a pet aboard when we cleared customs in Chubb Cay.  Who knows, he may actually be a legal resident of the Bahamas.

A highlight of our visit to Hawksbill was a visit by a seaplane that landed just along side Pandora.  I went to the  beach to talk to the pilot who was waiting for his passengers that were delivered from a nearby island by boat.  It was a pretty neat plane.  I wish I could have gotten a ride.  The pilot was nice but not that nice. 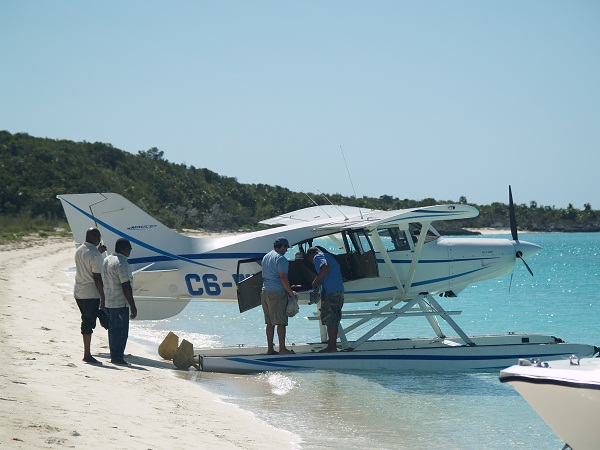 It’s now Saturday morning and we are headed, under power as the wind is right on our nose, over to Wardwick Wells, in the Exuma Park.  This is a little jewel of a harbor in the center of the park and the park’s headquarters.   It’s a great spot and was where Brenda and I spent Easter last year, as guests of the ranger and his girlfriend.

As an aside, if you follow this blog, that I was having some problems with vibration in the propeller shaft.  After much back and forth with the yard in Deep River, CT, and a number of trips in and out of the water, we were unable to pinpoint the source of the problem.  I even had my Maxprop reconditioned by the factory.   Some weeks ago I was speaking with my friend Chris and he wondered if perhaps it had something to do with my shaft zincs.  These are sacrificial metal anodes that are designed to dissolve and attract any stray electrical current so that the propeller and shaft are not damaged.  Anyway, having exhausted every possible solution to the problem, I took a look at the zincs.  They were attached to the prop as normal but I decided to loosen them and move them closer to the propeller and shaft strut.   I also opposed the seams on the zincs so that any inconsistency in the weight distribution would be canceled out by the other.  I also replaced the zinc on the prop itself that had corroded away.    So, what happened?  Amazingly, the vibration is gone.  After investments of well over $1,000, now much I don’t want to be too specific about, the problem was solved by repositioning the zincs.  Thank you, Chris.  Nice idea and it worked.  It’s not the first time that Chris has offered up a solution to a vexing problem.

Frankly, I do wonder why the yard didn’t mention this as a possible solution.  It seems so logical now.  With a few pieces of metal bolted to the prop shaft the idea of repositioning them is just so simple.  Oh well, live and learn.