>Discovering the Isle of Shoals

>It’s early on Wednesday morning as I write this and we are sitting on a mooring at Isles of Shoals an archipelago of eight islands, half in Maine and half in New Hampshire Located six miles off of Portsmouth New Hampshire. Three of the islands are connected by breakwaters which create a snug harbor that is protected from the prevailing southwest winds.

Yesterday we made our way from Biddeford Pool, part of the way under sail and the rest under power, to this lovely group of islands. With the exception of a few rocky spots along the coast, Isles of Shoals is one of the only group of islands located between Portland and the Cape Cod Canal, a distance of more than one hundred miles. As has been the case since we arrived to bring Pandora back, the winds have been from the north or northeast, perfect, and not the standard as the prevailing winds are from the southwest, and right on the nose.

There is a long history here with the first description of the islands made by Captain John Smith in 1614 who was quite taken by the place. He described it as “Of the foure parts of the world that I have seene not inhabited could I have but the meanes to transport a conlonie, I would rather live here than any where.” When Europeans first settled here it was for fishing as the quantity of cod in these waters was unrivaled. Since that time the islands have been home to Blackbeard the pirate as well as a number of famous poets and colorful characters. Legend has it that Blackbeard buried treasure here. Unfortunately, with the exception of two large silver bars discovered in the 1800s, no treasure has been found yet in spite of some very determined searches. In 1872 a large resort was built called the Oceanic House which still stands today albeit operated by a different group, the Star Island Corporation http://www.starisland.org/. The “hotel” is quite impressive as it’s very unusual to see such a massive structure of wood today. As you can imagine, there is a strict no smoking policy on the island. It’s primarily a religious retreat today and you can still sign up to spend a week or more in “contemplation”. Sounds entirely too quiet for me. 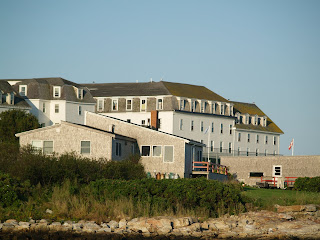 A view of some of the buildings on Star Island, with the “hotel” and lots of other historic buildings. It’s quite a wonderful little village. Some are community buildings for meetings and such. 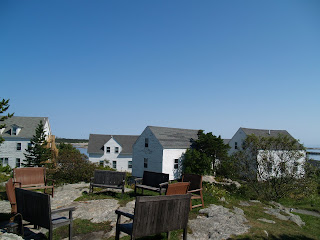 The island chapel. It seems that there are a lot of weddings held here. Albeit, casual affairs as that’s the theme of the island. 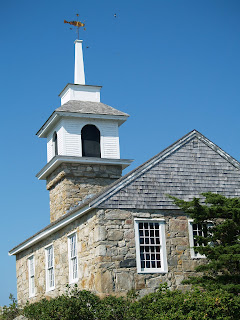 A view through the door of the chapel. What a quaint place. The alter was decorated with local wild flowers. 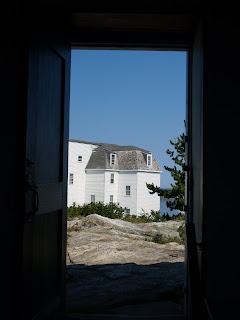 One of the lovely stone buildings. The place is well staffed and incredibly well kept. 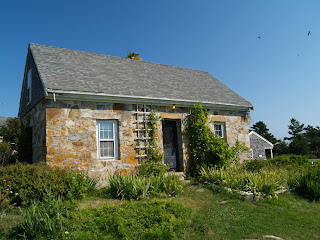 The harbor is jammed with moorings, all on top of each other, and even on a weekday there are quite a few boats in residence including some that look like have come a bit of a way to get here. I saw one that hailed from Virginia and another from Westport CT. I can’t imagine how busy it must be on a major holiday weekend. This photo suggests that Pandora was on a mooring all by herself. Actually there were boats all around but most had left prior to our heading out. 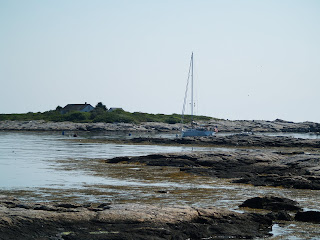 There are a collection of dories in the harbor for the locals to use in exploring the islands. 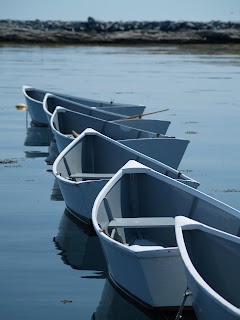 This light guards the southern approach to the Shoals. This view was taken from Star Island. It was very close indeed. 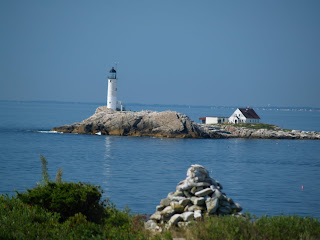 This flower, shot on the island, sums up the weather that we have been having all week. 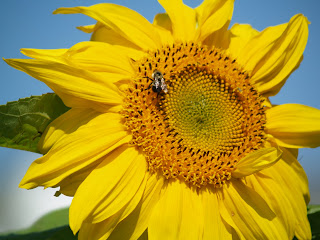 We are still about 75 miles from the Canal and won’t be going very far today, probably down toward Gloucester.