Getting closer, to the Bahamas, and warm, in a relative sort of way.

It’s Tuesday morning and Brenda and I are on our way south in a rental car, headed to Ft Pierce and Pandora. As I begin this post we are tooling along 95 south and have just entered Georgia.  The last few months have been an emotional whirlwind as my father’s health declined and we dealt with things that we had (thankfully) precious little experience with.

A very important step in all of this was to find a good place for my mother Shirley to move to and after several weeks of exploration, I found her a very nice apartment in an assisted living facility in East Haven CT.  Happily, the place is not too far from some of her friends of many years, which was important.  As an added bonus, her apartment, located on the third floor, has a commanding view of Long Island Sound, a piece of water that I have passed through so many times over the last 40 years of sailing.  So, one week ago we moved her from her apartment of nearly eight years to a nice new place.

Happily, my mother paid me the ultimate compliment a few days after she moved in when she told me that she liked her apartment and that I had chosen well.  Yahoo!!!  What more could a son ask for.  She’s the greatest.

When I told her that I was planning to abandon her to head out for three months in the Bahamas she thrilled me again by taking my hand and saying that after all of my hard work that I deserved to take a long trip.  Well, that made my little doggy day.  We’ll see how she feels about me ditching her after a few months.  Ditching her Bob?  Well, that’s exactly how I feel. I will say, in defense of myself, that the place is just lovely and with a lot of help from Brenda, her apartment is very well decorated .  Thank you Brenda!!! That’s not the first time I have uttered those words.  Yes, indeed, thank you Brenda.

So, after leaving New England, and single digit temperatures, far behind, we are now in the deep south passing wetlands that so remind us of our trip south on the Intra-Coastal Waterway, the ICW, one year ago.

One of our favorite destinations on that trip was St Augustine and we plan to stay in a lovely historic inn, The Old City House Inn,  downtown in the historic district, for the next two nights before finishing our journey to Ft Pierce and Pandora later this week. Today we will have lunch with our friend Peter who recently sold his SAGA 43 after settling as a snowbird in St Augustine with his wife where they live for the winter and summers in Maine.  A few years ago they too were passing through St Augustine on their way south aboard Lumen, their SAGA and they loved the city so much they decided to buy a land home and settle here as their winter home.

Peter collects classic cars in a big way. Peter and his business partner own about two dozen cars. That’s a lot of cars. They have a website www.mainelineexotics.com.  Peter told me that his site is currently being updated but should be ready in just a few days.  I’d check back as he owns some really exotic cars.   Peter’s collection is clearly in a different league than ours.  However, Brenda and I do own a single classic.  A nice little, fully restored, red 1962 MGA Mk 11, one of the last of the MGAs built.  Big collection or not, owning even a single classic is just terrific.  Not a bad way to spend time enjoying New England summers when we aren’t out sailing in exotic places.  This is a view of our little car near our “summer home” in a beautiful cemetery overlooking the CT River. 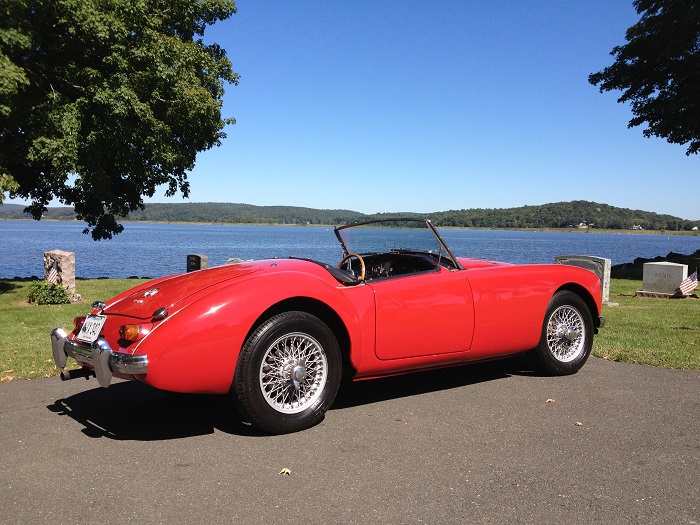 That’s as opposed to our “winter home”, Pandora.   Not much use for a convertible car in New England in the winter so that makes it a good time to head south in my book.

The last two days of driving south have been interesting, in boring sort of way, as we passed over mile after mile of highway, watching the late January landscape go from winter grey to the first pink buds of spring.  Yes, here in GA the buds on the branches are starting to swell in anticipation of warmer weather.  I can’t say that I have ever used the words “spring” and “January” in a single sentence.  I guess there’s a first time for everything.

My brother Bill has been driving this route for years as he delivered show horses to and from FL and the winter show circuit.  He too has marveled at the changes in temperature or seasons on his way back and forth, sometimes three times a week. He told me that one year he drove to FL and back thirty times.  Yikes.   He also mentioned that on one visit as he headed south, it was snowing hard as the light faded one evening and as the sun rose the next morning he was driving among palm trees.  Now, that’s a fast season change in just eight hours.

Speaking of Bill, as we headed south on Monday, just outside of Richmond VA, I called Bill and found that he was headed north in the same general area.  So, we talked on the phone for a short time, just long enough to wave to him as he raced past us going north as we headed south.  How amazing to actually see him pass us as we went by in the opposite direction.  Who’d expect to see pass a single particular truck on a 1,000 journey.  Well, it seemed pretty neat to me and Brenda.

Well, it’s now Wednesday morning and we are in St. Augustine.  Nope, I didn’t get my post done on the same day.  I’ll blame it on Internet trouble.

It’s fun to visit friends along our travels and we met our friend Peter yesterday for lunch after arriving here in St. Augustine.  It was a treat as we only see him on occasion as we move up and down the East Coast.   These periodic visits with friends are very much a part of cruising aboard Pandora as acquaintances enter and leave our lives only to re-enter again, year after year.

Over the last few weeks the number of e-mails from friends like these have increased with questions about or plans and timing for crossing over to the Bahamas.   Just last week I spoke to Ted and Ginnie aboard Firecracker, another SAGA 43, when they were getting ready to head further south in anticipation for crossing to the Bahamas.  Yesterday I tried them again and the phone went immediately to voice mail, a sure sign that they are out of cell range and probably on their way to the Bahamas or already there.  As an interesting aside, Ted’s boat is called Firecracker as he was born on the 4th of July.  It must be nice to have everyone shoot off fireworks on your birthday.

For those who have seen my blog over the last few years, you have seen reference to my “spot” GPS transponder that marks our location on a Google Earth map so our friends know where we are most any time.  I have even gotten “spot messages” from a few folks recently who want us to keep track of their travels too.  It’s fun to stay in touch with this “movable neighborhood”.  Great fun indeed.  Note that on my home page, there’s a “where’s Pandora” button.  When we are aboard, and we will be there soon, you can click on the link and see where we are.  I think that’s pretty neat.   We will make a point of “pushing the button” each day and more often that that when we are underway.

Oh, I should note that our room here is really quite cute.  Happily, Brenda approves too.  The inn is above a pretty little restaurant.  There’s only seven rooms.  Very quaint.  Each room is very different and ours has a tiny balcony overlooking the street. Nice view. 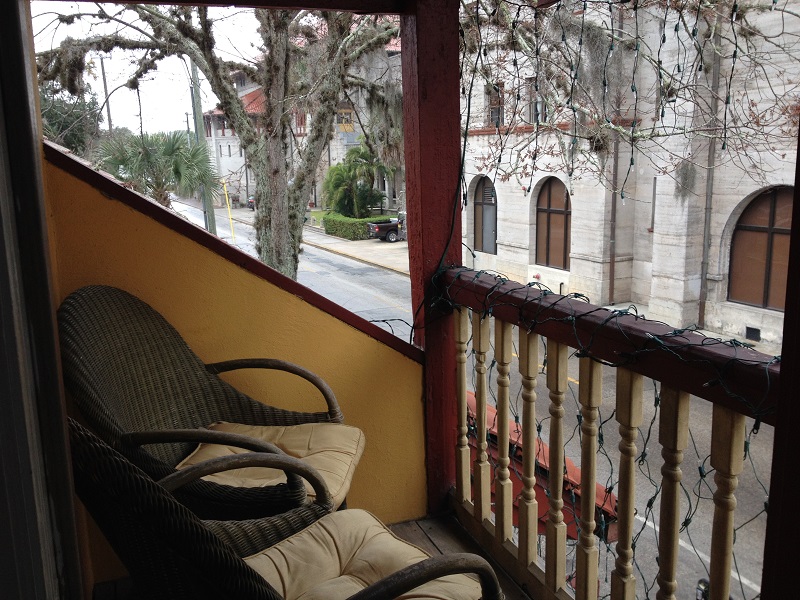 The only problem with the weather is that the ice storm that we were racing to avoid is now a rain storm here.  It’s in the low 40s and rainy.  Not perfect Florida weather.  However, it is January and warmer in a relative sort of way as the temps at home in CT are a somewhat less balmy low teens.

Yes, it’s getting warmer but only sorta so.  Well, it will be better soon as the weekend is expected to be in the 80s.  That’s good and just what I am looking for.

Bahamas, here we come.  Soon is not fast enough…

Speaking of boating and just for fun, here’s a short piece of a less than delicate way to bring a ship up to the shore.  It seems that this ship, after years of work on the English Channel, was to be scrapped in Turkey.  So…what better way to get her up on dry land than to drive her full speed and crash up onto the beach.  Not to subtle but efficient in a crash and bang sort of way.  Do not try this at home.