A great way to bring back, and create, memories of the Bahamas.

Some months ago I visited a friend Dick who lives on the water in Darien.  Dick’s home is bathed in sun and has a fabulous view of the water.   Dick and his wife Robin are well traveled and surround themselves with art collected from many of the places they have traveled and they have been to a LOT of places, some 140 countries by his recollection, over the years.

Some time back they took a trip down the ICW from Long Island Sound to Florida and onto the Bahamas.  After returning, as luck would have it, they happened on a show of an artist’s work that included a series of plein air paintings (paintings done outside as opposed to in a studio) he had done when he spent the winter in the Bahamas with his family.  As Dick showed me around his home and talked about the various artists’ work they own, I immediately recognized the work of Chris Blossom, the guy who had painted in the Bahamas.   Chris has a remarkable body of work.  If you google his name under images you will be treated to dozens of photos.  You can also click here to see some of his work.

Under the category of “it’s a very small world” the artist, Chris Blossom, is a good friend.  Chris and I lived in the same neighborhood when we were in highschool.  Actually, it was with Chris aboard his Alberg Typhoon, that I went for my first sail.  Actually, Brenda, me and Chris sailed together on his Typhoon in high school.  Chris was also “best man” in Brenda’s and my wedding way back in 1974.    The fact that my youngest son Christopher has the same name is no coincidence.  Enough reminiscing for now.  It’s sufficient to say that I have known Chris for a few years.

Anyway,  after seeing Dick’s collection some time back, I thought it would be fun to get together with Dick again and bring Chris Blossom along to see his work “in situ”.  Also, having been away from Pandora and “on the hard” here in CT for six weeks, I thought that it would be therapeutic to get a “nautical fix”.

So, Chris and I stopped over to see my friend Dick who happens to be the current master of the Corinthians, a great sailing group that I have been a member of for years.  A “nautical art appreciator”, a “nautical art maker person” and a “nautical hanger on”, me.  Perfect!

We had a great visit and spent a good amount of time touring the collection.  Here’s Chris and Dick admiring one of Dick’s works. 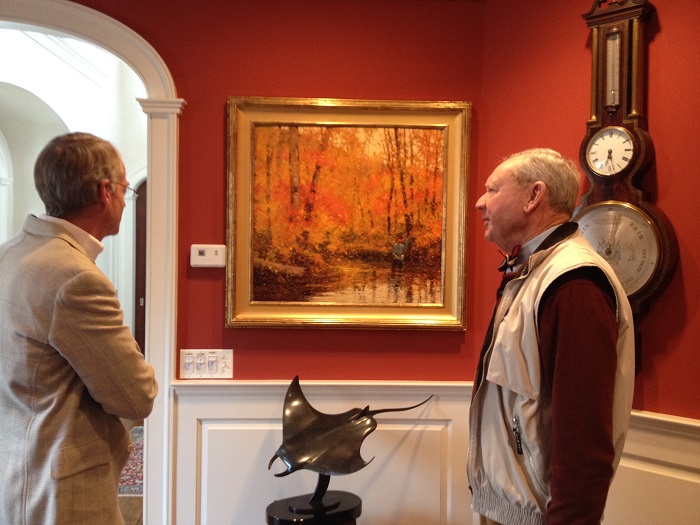 Dick is particularly interested in art as a way to document places he has visited.  In this case, Dick has fly fished in this exact river and spot.  What a lovely feel this piece has.  Clue… Not the Bahamas.

Many years ago, Dick became interested in the work of Howard Chapelle, who took the lines of many “type examples” of American traditional sailing craft.  His goal was to create plans for these wonderful boats so that they would not be forgotten.  Actually, these vessels were constructed by eye as there were no written plans.  Without Howard’s work we wouldn’t know as much about early commercial sailing craft as we do.  This is an example of his work.  He did not design this particular boat, he measured and documented one that he saw, in exquisite detail. 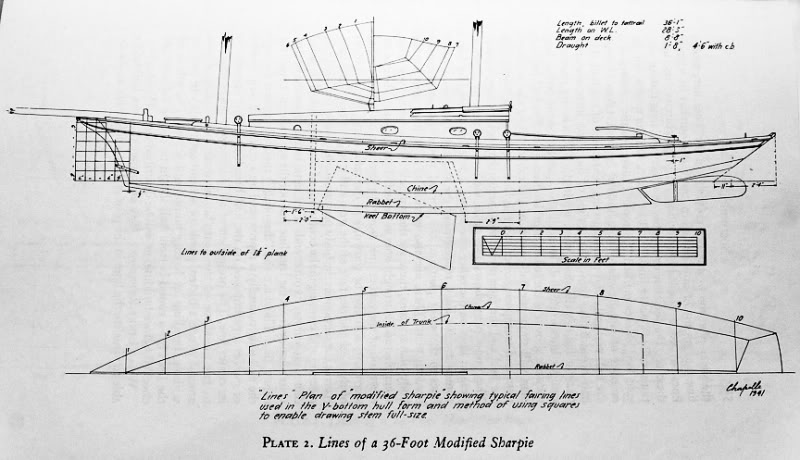 I mention this as Dick hired a model maker to choose a representative selection of Chapelle’s work and create a series of models based on the designs he had documented.  So, over the years, as budgets permitted and it must have been a pretty good budget, Dick had quite a few of these models, all to scale, 1” to the foot, constructed.  Here’s a lovely display case with some of the pieces.  Pretty nice. And no, I don’t know what yacht club the burgee is from.   Perhaps Dick can fill us in.  Dick? 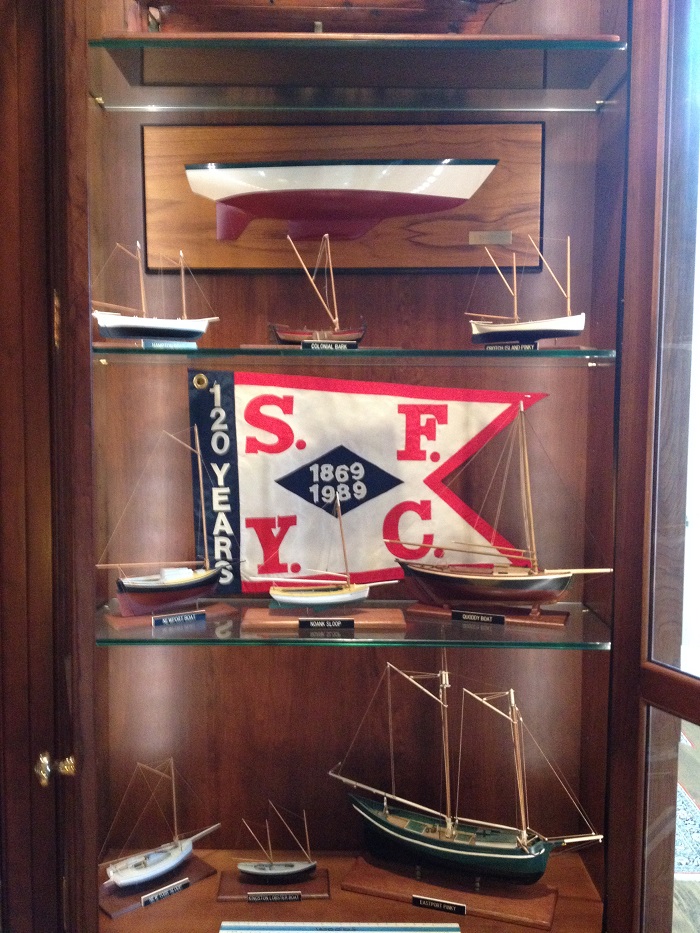 I was also struck by this “admiralty model” of a cargo ship.  It’s not exactly to scale but really nice.  Models such as this were often given to ship owners by the yard that constructed the ships. 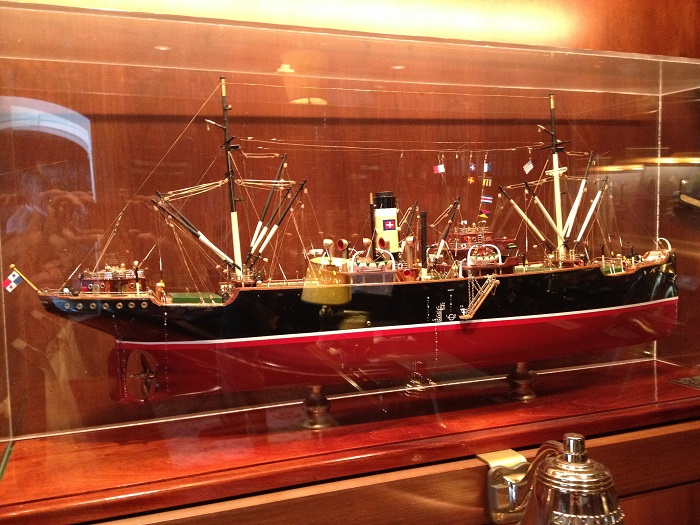 Here’s Chris and Dick, two kids in the candy store.  Well, it’s Dick’s store, actually. Can I have a piece of gum?   Dick, what’s with the bow tie?  It’s the middle of the day and you are home…  Dick claims to wear bow ties all the time, even at home.  I wonder if he fancies himself as some sort of aged Chippendale dancer.  You know, the “hunk male strippers”.  They wear bow ties too.  Hmm… 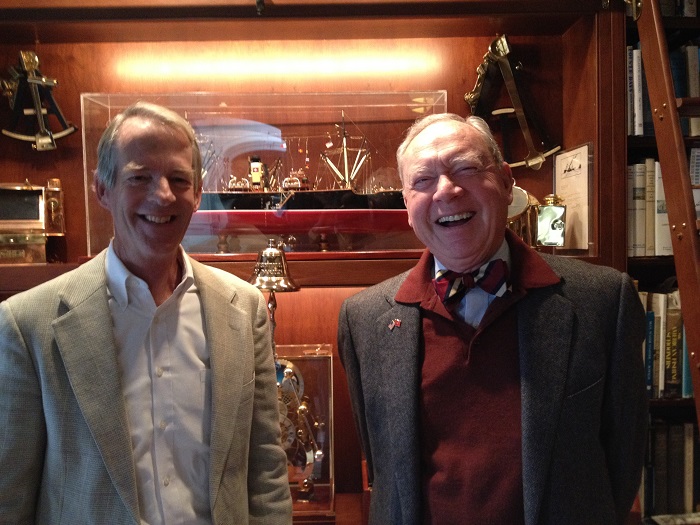 Forgive me.  I can’t resist.  Is Dick some sort of closet dancer?  Is he the one on the left or right?  You decide.  (Editor:  In the interest of full disclosure, I love bow ties and wear them as often as I am able)“ENOUGH ALREADY BOB, what the H$%^ are you doing!!!”

Never mind.   So, back to those Bahamas paintings that got all of this started.  Here’s Chris in front of two of his works.  Really nice stuff.  They really bring back memories for me, who wants to be there, Chris, who was there and painted them and Dick who gets to see them every day. 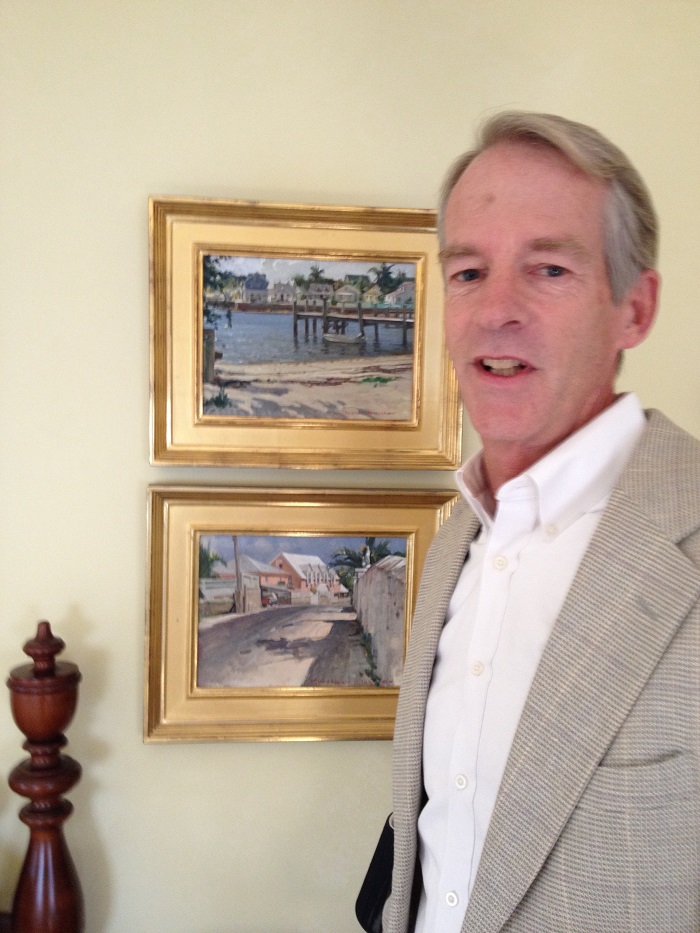 Yes, it’s great to have things to remember places that you have visited.  Me?  I love the Bahamas but for now will just keep writing blog posts with all sorts of random stuff thrown in.  Besides, when was the last time you saw a Saturday Night Live video on a sailing blog?   Random?  Yes, indeed.  Fun?  I sure hope so but you will have to be the judge.  Be nice now…