A blast from the most recent past. Just Take Two…

As I was moving from the transient dock to Pandora’s assigned slip here at Harbor Town marina in Ft Pierce on Thursday, I was greeted by calls of “Hi Pandora” from the deck of a nearby boat.  The “shouters” assumed that I was leaving the marina but were happy when I turned the corner and entered the marina basin and into a more long term slip where Pandora will be till mid January.

As I looked over to see who was yelling, I was thrilled to see Tanya, of the catamaran Take Two, along with her’s and her husband Jay’s five (count them) children waving enthusiastically to me as I motored by.

Brenda and I had spent some time with Jay, Tanya and their brood, in the Bahamas last winter when we saw them in the Abacos.  We had seen them earlier in the winter but hadn’t been introduced.  Actually, Jay took photos of Pandora reaching across NW Providence Channel as we headed to the Abacos and presented me with the best shots of Pandora under sail that have been taken by anyone.  How about this shot?  Pretty nice. 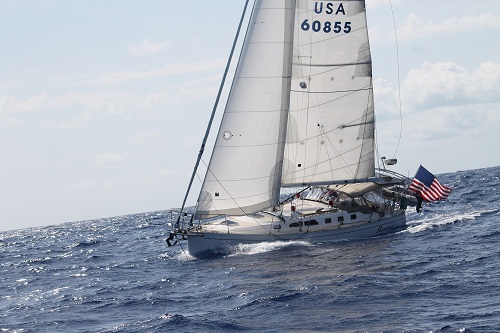 Jay and Tanya have lived aboard Take Two with their children for the last four years.  Actually, in the interest of full disclosure, they first became liveaboards with four children and now have five, with the addition of Rachael, their youngest.  I guess that living aboard agrees with them.  If Dr. Seuss met Rachael he might have found inspiration for his character Cindy Loo Hoo in her.  She is a cutie.

I stopped over to visit after tying up Pandora in her slip to say HI to the gang and was very pleased to be invited over for dinner.  What luck!  All I had to do was to bring over some wine and was treated to a lovely dinner and evening with the “gang”.  And, what a gang it is.  Their catamaran is a riot of toys and color.   There is everything from Legos, colorful hair clips and party earrings.  Someone was even building a pyramid out of sugar cubes in the cockpit.  Now, that’s not something you see every day aboard a sailboat, is it?  Take Two has all of the accouterments you would expect for a home with parents, three sons and two girls.

Jay and Tanya, like me and Brenda were high school sweethearts, having met very young.   However there is one major difference, and don’t quote me on this, but I think that they have been married only since the 90s.  What a couple of little kids!!!  Brenda and I, just a little bit older, met in junior year high school algebra class and were married in 1977.  Seeing Jay and Tanya made me think back to those “dating years”.  It’s been a long time and yet seems like only yesterday too.

Tanya made a mess of enchiladas for dinner, what seemed like enough to feed a small army, which they have.  With three boys and two girls, they really do have an army, and one that they are home schooling.  It seems that the next major chapter in their next major lesson plan will include a voyage to Panama next winter.  What fun.   I can’t imagine any more fulfilling opportunity for kids than a visit to such an exotic country.   Having said that, living aboard isn’t easy and to home school 5 children as well is worthy of a “parenting medal of honor”.  Hats’ off to Tonya and Jay for a fine work in progress.

I understand that they might not make it to the Bahamas this winter (bummer) and instead, may opt for a visit to the Florida Keys.  Sounds like fun but I do so hope that our paths will cross again soon.

After dinner I asked if perhaps I could get a “family photo” and within a literal moment, all were assembled and ready.   How great is that?  No need for 15 minutes of assembling a reluctant group for a photo, just a simple request and an equally simple answer.  And yes, the first shot was perfect.  What a great looking brood. 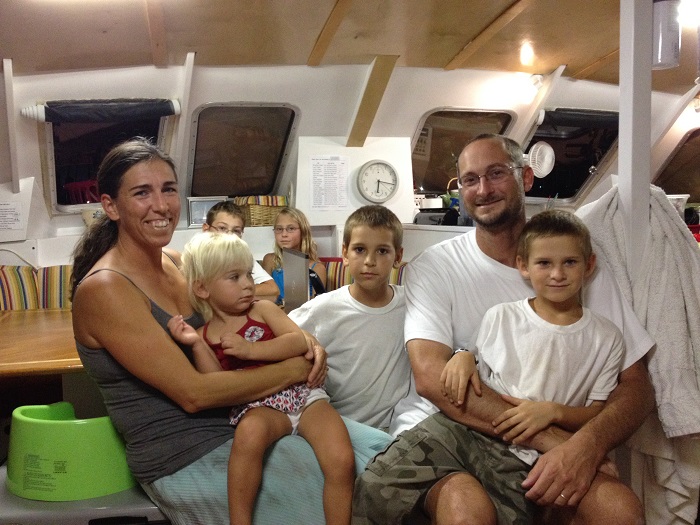 Imagine living full time on board with five energetic children.  As an added testimony to how things are going, they moved aboard with four and now have five.

As you can imagine, life aboard Take Two, is a bit chaotic, but in a very nice way. The boat has four cabins and one of the spots that two of the boys share is a riot of Lego Toys.  Little Rachael’s bunk is as pink as you would imagine.  Me, I think that I need a bit more tidiness but it was such fun to visit a home where expression by all is encouraged and celebrated.   Good for you, Tanya and Jay.  I wish that I had the guts to toss it all to the wind and sail off into the sunset.  How nice is that?

Perhaps the highlight of the evening was when their older daughter Sarah and Rachael disappeared down below for a beauty session with Sarah returning, multiple times, with little sister in tow who did a shy pirouette to show off her lip gloss, designer earrings and hair ribbon.  She even changed into her little pink too-too at least once, perhaps twice.  Her expression was the “Aren’t I pretty” and shy at the same time.  Adorable.

It was nice to see how well the kids played together and it reminded me of our sons Rob and Chris so many years ago.

What a great way to spend an evening.   All that noise and lovely chaos also reminded me that child rearing is truly for the young.  I should note that there is a website for Take Two and it’s worth visiting.   Check it out here.  It’s well done and worth reading.

On the Pandora “technical” front, yesterday was spent meeting with the rigger to take a look at the suspect backstay as well e-mailing photos of the offending fitting to the rigger that had done the work in Annapolis.  And, I am happy to report that all is well with the rig.  It seems that the “rust” on the fitting was some sort of discoloration that bled down the wire and not any sort of corrosion.  False alarm from the rigger in Beaufort.  It’s two against one and majority rules.  Also, I cleaned up the fitting per the rigger’s instructions and it is obviously as good as new.

I also took off the boom vang and disassembled it.  Yep, as expected, an internal part was severed in one of my inadvertent crash jibes on the run from Beaufort.  I called the manufacturer and they felt that it could be re-welded.  It would be nice to avoid buying a new one.

Today, not a lot on the calendar except that I need to get a rental car for the trip to the airport tomorrow along with a visit to the canvas shop to have both dodger side panels re-stitched.  It seems that when we were being “splashed” on the run down here, the waves hit the side of the dodger solidly enough to rip out some of the stitching.  I left my sewing machine home as there isn’t really enough room for it on board.  A simple enough job but I am glad that there is a shop here that can handle it.

I have really enjoyed being here for a few days and while I would love to remain here in the warmth and sunshine, I miss Brenda and can’t wait to be home with her again.  Besides, just like the folks on Take Two, she’s my High School sweetheart and I enjoy being with her.  Pandora’s great but not complete when I am aboard alone.

I am very much looking forward to the holidays with family and can’t wait till Brenda and I return here in January to begin leg four and the beginning of our 2014 sailing season.

2 responses to “A blast from the most recent past. Just Take Two…”