>End of our Maine trip part one

>On Sunday August 19th we left Pandora on a mooring near Southport Island just west of Booth Bay Harbor. Our friends Doug and Sharon have generously let us keep our boat on one of their moorings while we return to NJ for two weeks. They moved to Maine a few years ago trading the frantic life of corporate America for a wonderful home on the water in Maine. Doug operates Southport Island Marine, a boat building and service company located on Southport Island.

It’s hard to imagine how many wonderful harbors are crammed into Maine and it would be just about impossible to visit them all over many years of cruising. Here are some photos of just one more harbor just a few miles from where Doug and Sharon live. It’s called Oven Mouth and the currents run very hard. At peak they run about 6 knots, which means that you can’t really enter or leave against the tide in a sailboat.
Entering Oven Mouth. It’s very narrow and deep. Very picturesque. 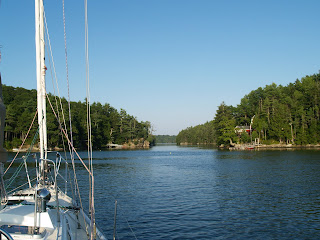 When the tide is running there are whirlpools all over the place. 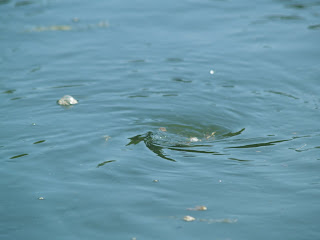 Just across from where we picked up a mooring is property owned by our friends Chris and Pat. They purchased the lot years ago, put in a mooring and dock but haven’t yet put in a house. It’s no wonder that they love this place, it really spectacular. This is their dock. I guess that you have to put in a dock while you can. Saved seat! 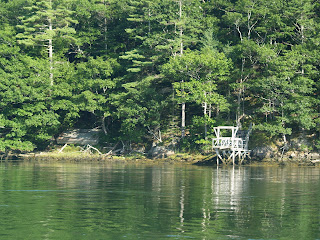 This is the view up the creek from Chris and Pat’s place. No wonder they plan to build a home here. The early morning mist was hard to capture in a photo. It was dead calm and VERY quiet. Perhaps too quiet for me. As you can see, Rip was really getting into the calm and zonked out in the dink. This summer he has gotten very used to being on the boat and just loves to SLEEP, SLEEP, SLEEP. 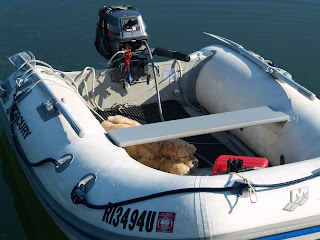 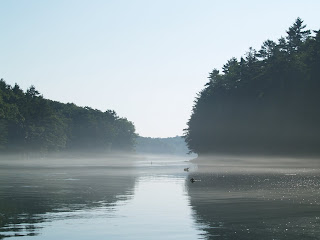 Some local wild life, a great blue heron. It’s a big bird that stands over 3′ tall. Not the greatest photo as it was dusk when I took the shot. 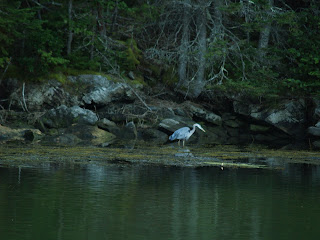 I went ashore to ask for permission to use a vacant mooring and met Chris and Pat’s next door neighbor Ed. I think that he’s mostly retired but has a lobster license and runs about 50 traps in his spare time. He says that lobstering “keeps me out on the water”. Makes sense to me. Ed was insistant that he make a lobster dinner for us but our schedule wasn’t quite flexible enough to stay another night. However!!! Ed’s offer is just too good to pass up so we hope to see him when we return next Friday to Maine and Pandora.

Much of the area surrounding Oven Mouth is managed by the Nature Concervancy and we hope to make some time next weekend to check out the trails. This lovely bridge is part of the trail system croossing one of the inlets. It’s a really nice bridge. 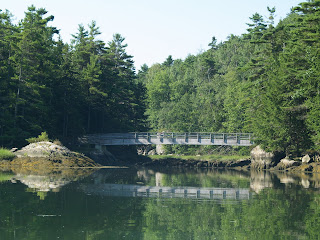 As a lunch stop on our way to leave Pandora on her mooring for a few weeks back in NJ, we stopped for lunch in Five Islands Harbor and the aptly named Five Islands Lobster Company. You can take out lunch and eat it on the dock. It was a really amazing day with lots of sun. A great way to end our trip. 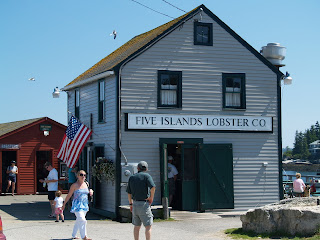 This photo (see Pandora just off the dock) really gives you an idea of the 9′ tides. That’s the dock where we ate. Amazing views! 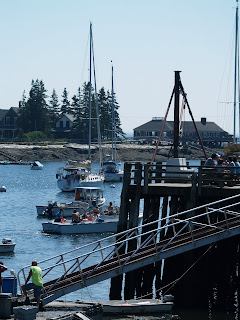