Heading south, very soon. This is the week!

It’s Friday around noon, sailing along in Block Island Sound and I am entering Watch Hill Passage and Fisher’s Island Sound, the eastern most part of Long Island Sound.

In a way it seems like just yesterday that I arrived in Essex from the Abacos but in other ways it seems like May was a long time ago.   However, when I think about the number of projects that I did on Pandora this summer along with the long “honey do” list of home chores from Brenda, I guess it’s been a long time since May.

I have been a bit stressed out about the weather for getting to Annapolis next week and for a while I thought that I was going to have to shove off on Tuesday at the latest which would be pretty tough to be ready for.  However, I spoke with Chris Parker, our weather router, a bit ago and he told me that while there won’t be much wind next week, it looks like the favorable wind window will stay open for much of the week.  It is my hope that we will be able to sail but at the very least, I’d prefer not to motor into the wind.  At this point, it is looking good.  Fingers crossed.   I’ll check with him on Monday to see how things are progressing.

I am making today’s run alone as my friend who was going to come with me came down with a 24hr bug.  While I’d prefer to have company when I am aboard, it’s plenty easy to run Pandora alone.  Actually, while I am typing away, the autopilot is happily steering away.  As long as the wind doesn’t pick up too much, the laptop should be secure on the cockpit table.  Having the laptop smash onto the cockpit sole would not be good.  Fortunately, it’s not too gusty.    Here’s a shot of my “office” for today.   Not too shabby. 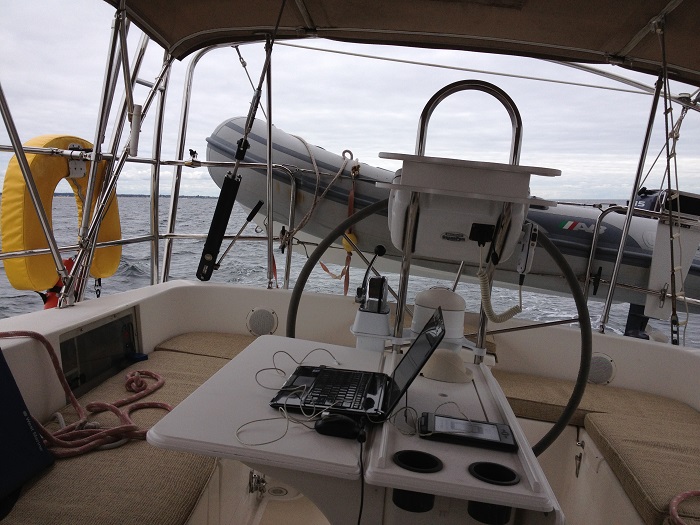 I had to set the computer down on the sole as I passed Watch Hill.  Lots of hard stuff to bump into and I needed to pay attention.  Also, loads of fishing boats out hoping to get lucky.   I like the Watch Hill Light.  It does look better on a sunny day though. 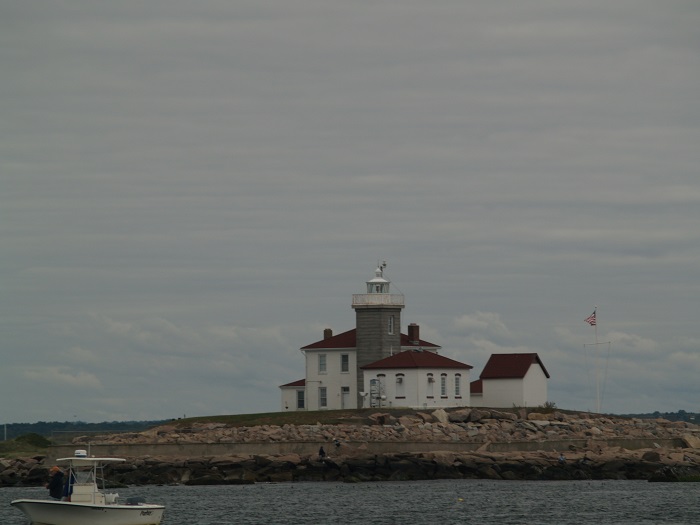 I hope to get to Deep River early enough to catch the mechanic before he leaves for the weekend so any parts that he has to order to fix the alternator can be arranged before the weekend.  There is a problem with charging and I expect that it was something done while the mechanic was working on the engine.

I guess I had better cut this short as the wind is dying and there are plenty of rocks to watch out for in Fisher’s Island Sound.  It would ruin my day if I bumped into one of them.  Trust me, I know about such things.

Besides, it’s lunchtime and I am getting hungry.  Oh yeah, the sun is coming out too.  Perhaps that’s a metaphor for the coming months.  Yes, I’ll go for that.