So, just how hot is it sanding Pandora’s bottom?

How hot does it feel to be out in 90 degree heat and sanding the bottom of Pandora?  Let me tell you, it’s hot, really hot.

I try to head to work on Pandora most every day and hopefully, before it get hot. If I get there around 7:30 in the morning I can usually get a few hours in before it becomes unbearable.

The plan is for me to sand off all of the paint so I can begin fresh with a new type of paint that hopefully will work better over the next few years.   For now, the goal is to sand off all of the paint back down to the bare hull.  In some cases, like the keel, that means taking off many layers that have accumulated over the years.  Fortunately, much of the hull has only a few layers of paint and some areas have little or none.

Having said that, the going is still very slow.  This shot shows what I accomplished after several hours.  Not too good. 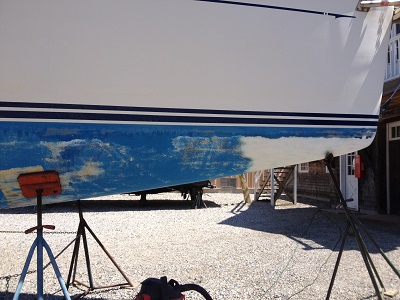 Now that I have been at it for several weeks, this is what it looks like.  This side, starboard, is in the shade more of the morning so I have favored working on this side.  I like shade although I still sweat like crazy.  Making progress.   Notice that even the keel is mostly cleaned up too. 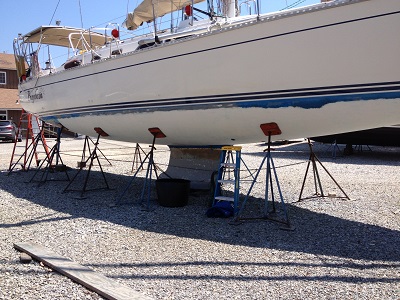 Port, not quite as far along. 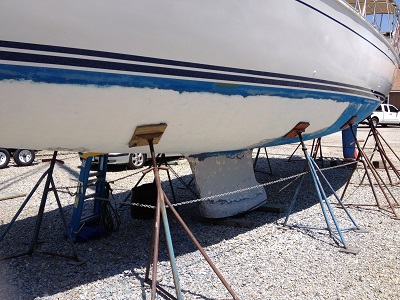 Along the way I decided to pull out the rudder so I can put in new bearings.  The current ones were getting a bit sloppy.   We wouldn’t want the rudder to fall off, would we?  Actually, not much risk of that but there was plenty of clunking of the sloppy bearings.

Friday they will pick up Pandora with the crane so I can lower the rudder out of the boat.  I spent several hours today and yesterday removing the various pieces of equipment that steer the boat and attach to the upper rudder post.  After 15 years some of the bolts, no make that all of the bolts, were tough to get off.  I was successful in getting a few off and several broke.  Looks like there will be a bit of work on the bench cleaning things up prior to putting things back together.  Not a simple job.

I am also having some work done on the engine as it’s not had a through going over since I purchased her.  Good thing as the mechanic has found a few “issues” that need to be resolved.  Glad that I had him on board.  I like to do much of the work on Pandora myself but major engine work is a bit above my grade.

Hopefully, the heat will break in a few days, but for now I’ll just be sure and drink plenty of water in an attempt to stay on my feet.  Sure I could hire the yard to do the grunt work but at $100/hr, that’s a lot of hours.

Besides, when I am done, I will be able to say “I did it myself”.  Yes, that’s Yankee for “I am too cheap to hire someone”.  Besides, the more work I do, the more  I ice cream I can eat as long as I wash it down with a gallon or so of water.

Quick, pass me another bowl of heavenly hash.  Hmm…

I just wish that my arms weren’t so tired from sanding that I didn’t have so much trouble holding the spoon.   Don’t worry, I’ll find a way to adapt.