The Essex SSCA gam is a success!

I feel like it’s been ages since my last post.  After putting something up a few times a week when we were away, I have to admit that I find it hard to find stuff to write about when I am home doing chores, like cutting the lawn.  Having said that, I do like the mix of shore and afloat.  However, a major time sink over the last few weeks was getting ready for our first Seven Seas Cruising Association (SSCA) Gam here in Essex which we had for three days over the weekend.

When Brenda and I traveled down the Intra Coastal Waterway (ICW) last fall we took advantage of a terrific benefit of the SSCA, their “Cruising Stations”.  These “stations” are provided by members of the group that live in areas where cruisers pass by.  These folks agree to take members out to get groceries, marine supplies and other necessities when they stop by their area.  Last fall, prior to heading south, Brenda and I signed up to be the Essex Cruising Station with the goal of helping out fellow cruisers who visit Essex.

SSCA also has a number of Gams or meetings on the east Coast including one in Annapolis in September, November in Melborne Florida and an informal one day gam in Isleboro Maine in August.  It seemed to me that hosting a Gam here in Essex to connect with cruisers who are headed to Maine for the summer would be a good idea, and fun.  After much discussion about dates, we settled on late June.

So, how did the first Essex Gam go?  Thanks for asking.  It went very well, thank you.  The “event”, with a total of 35 participants was held over a three day period, with something happening each day.  While all attending spend time cruising, on small boats and a number of them live aboard, one couple, Harry and Jane of Cormorant, just returned from a 15 year circumnavigation aboard their 39′ Corbin.  What a nice couple and how interesting to hear about their journey.  I hope to have them speak to our group next June.  However, given their vagabond life, who knows where they will be in a year.  Actually, you can read about their travels on their blog.  I have not read much yet, but it’s got to be great reading.

Don’t they look like nice folks?  Photos don’t lie, at least this time.

We kicked off our Gam with a cocktail party at the Essex Yacht Club, where Brenda and I are members, on Saturday June 22nd.  I thought that having an informal cocktail party to kick things off would be fun, and it really was.  Here’s me calling the group to order to announce the weekends itinerary.  After years of getting folks attention by banging a spoon against a wine glass, in my previous life, it was so great to blow my conch horn.  So much more “cruiserly”.  I am happy to report that I blew it pretty well even with the pressure of an audience.  I am just so “mature” these days. 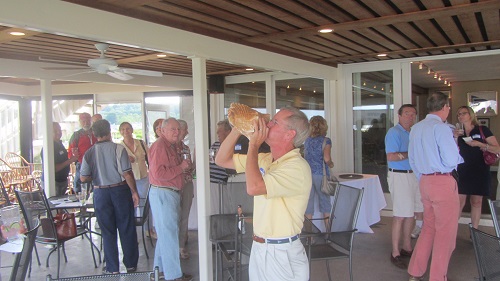 On the next afternoon, Sunday, we had a potluck supper at the Essex Corinthians Yacht Club, next door.  That club is a little less formal than EYC where a pot luck, because EYC has a full service kitchen, wouldn’t work.   An SSCA member Ted, who lives aboard, brought along his guitar. 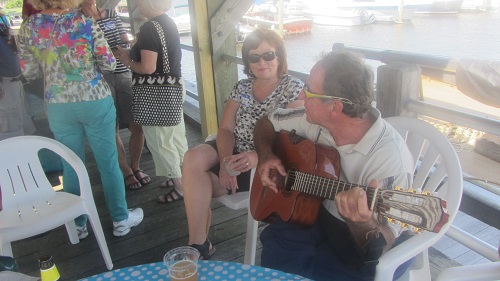 On top of the group that came to the cocktail party on Saturday, a few late comers joined the group.  The weather was perfect and we had a terrific time.  We also had a speaker, Judy Silva who has just published a book “The Voyage of the Yankee Lady” an account of her voyage with her husband Jim up the Hudson River, into Lake Champlain, into the St Laurence River, past the Canadian Maritime provinces, including Newfoundland and back down the coast and back to the CT River where they began their trip.    This is Judy, Jim and me.   It was nice having them with us. 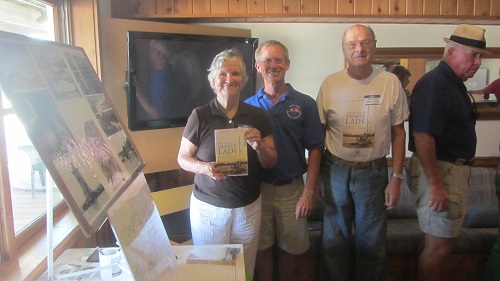 On Monday evening, the final night of the event, about a dozen of us attended the Sea Shanties at the nearby Griswold Inn just up the street. 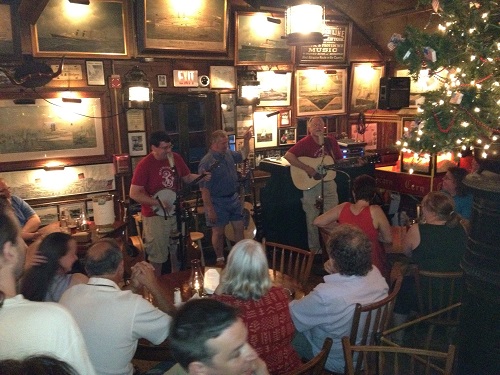 The “Gris” as she is known locally, is a very pretty colonial period inn and restaurant that is very popular with locals and visitors alike.   All decorated with her bunting she surely looks the part of a country inn.  The Gris hosts sea shanties every Monday night, year round.  It’s worth a visit but be prepared for standing room only, and on a Monday night of all nights. 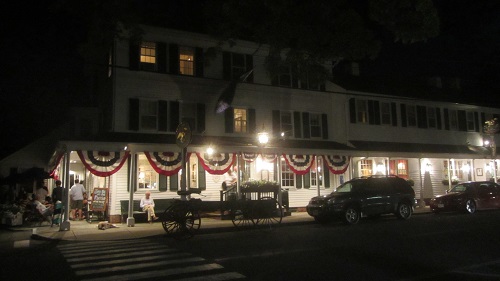 During the weekend some visitors took in the local Essex Steam Train, a great thing to do when you are in town.  The cars are very well maintained and this one in particular, well appointed. 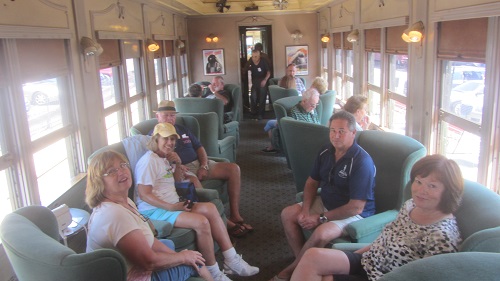 All and all, the weekend was a terrific time.   I couldn’t be more pleased with how it all worked out.  So happy, in fact, that we will be doing it again next year, probably over the weekend of June 21st.

So, now back to work on Pandora who is supposed to come out of the water today.   On top of that, I have a patio to build for Brenda and there are a few more cruisers in town to take to the market.   Whew!  So much for a retired life of leisure.

One response to “The Essex SSCA gam is a success!”