I was thrilled yesterday when I received this week’s installment of Blue Water Sailing’s “Cruising Compass”, an e-newsletter that they send out weekly.  I have been a subscriber to BWS magazine and newsletter for a number of years and am just tickled that they chose a photo of Pandora to feature.  Each week they publish a photo taken by a reader or of a reader’s boat.

This is the shot that they used.  It was taken by Jay on Take Two. 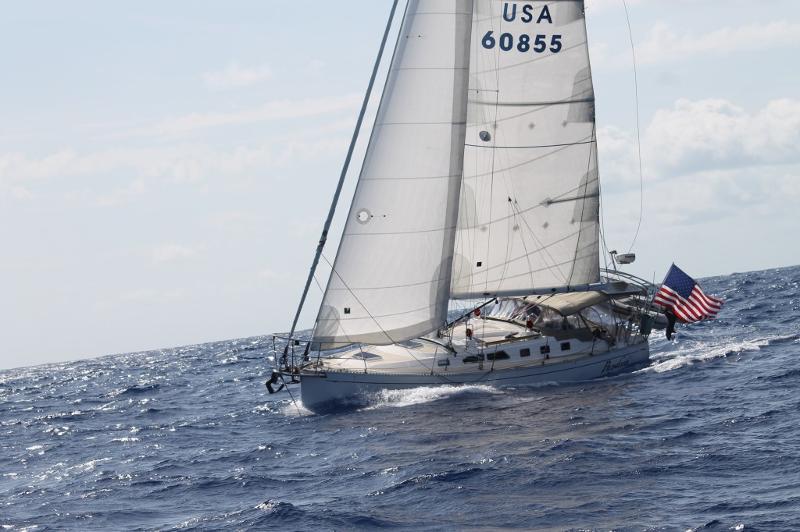 You may recall that Jay and Tanya live aboard the 48′ custom catamaran Take Two with their five, yes five, children.  They are a wonderful gang and it was fun to meet up with them in the Abacos.  Jay took a number of photos of Pandora as they passed by us (yes, they passed us smartly and it made me nuts) as we sailed from Royal Island at the top of Eleuthera, to Little Harbor in the Abacos.  I do take some solace in knowing that Pandora’s bottom looked like the fur on an ape when I cleaned her a few days later.  As Pandora’s ablative paint had almost totally ablated, she was pretty foul.  Having said that, I expect that Take Two would have passed us anyway, if a bit less decisively, had her bottom been clean.

Jay and Tanya keep a very nice blog of their travels.  Yes, Take Two is a big boat but seven is a big crew.  Quite remarkable and impressive.    Their blog is a combination of info about cruising with a “herd” and some interesting recommendations on what works, or doesn’t, on board.  A recent post, May 4th, has some amazing shots of water spouts.  We had been in the area that they describe when the spout came through but didn’t see it.  Not something that I would like to have in my neighborhood.

Yesterday, I was able to finish up the interior cleaning of Pandora and she’s back under control.    My nature is to have things all neat and tidy.  Tidy’s good and Pandora is, mostly, tidy again.   Bummer that I still have not found the fresh water leak.   Looking under control down below once more. 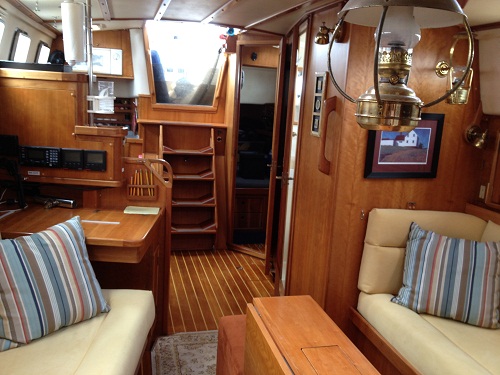 And, if perhaps a somewhat awkward segue, speaking of form and function, I was struck by this lovely motor-sailor in the marina where Pandora is right now for some maintenance.   Vagrant is just lovely.  She even has a nice round cocktail table on the aft deck.  I can just imagine how great it would be to be motoring down the CT River enjoying a G&T while someone else steers from the cabin helm.    Classy boat indeed.    I’ll have to learn more about her.  While she probably won’t win any races.  However, she will certainly win some hearts. 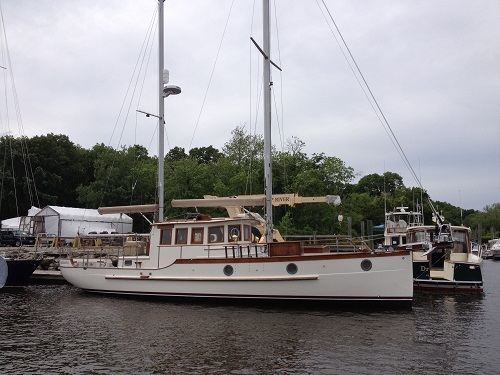 Function does dictate function and Pandora looks a bit different.   Perhaps it’s just me but she does look like she is on the move.  Perhaps it’s the river current. 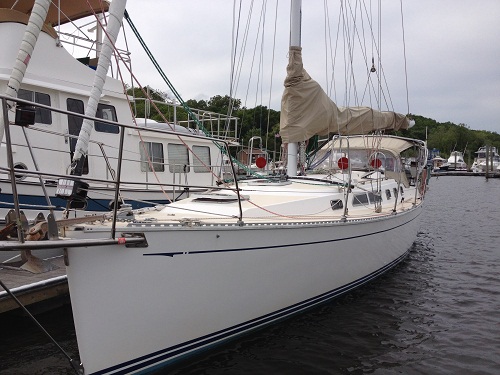 In case you are wondering, a G&T tastes pretty good aboard Pandora too.