Back in shore mode now. That didn’t take long.

It’s been only a week since I returned home and yet, in some ways, it seems like much longer.  On the one hand, being ashore is so much easier to know that when I turn on the shower it will get hot like magic.  It’s also nice to open the fridge and not have to dig down two levels to find cheese that may or may not even be there.

After eight months aboard it’s been nice to take some time off in “easier mode”.  Someone told us early in our trip that cruising was hard and that we had to do whatever we could to make it as easy as possible.  Actually, that comment was directed at me with the goal of making things easy for Brenda.  “Remember Bob, make it EASY for Brenda”.  Happily, most of the time it wasn’t too hard (Brenda might have something to say about that) but there is no question that being aboard is much harder than being home.  However, there is so much about cruising that makes the hard stuff seem, well, not so hard.  Don’t get me wrong, being home is hard too, and a lot more expensive.   Our VISA bill jumped immediately as we returned home.  So much more to keep up with and so much more space for “stuff”.  It’s also breathtaking to see the list of things that need to be accomplished each day around the house.  How did I ever have time to work?  Hmm…

Speaking of hard, some of life’s most worthwhile experiences are hard.   I’d put cruising in the category of “harder” along with keeping a home beautiful, or at least as beautiful as possible, but both are certainly rewarding.  I like splitting time between time on the water and time on the hard.   However, that’s definitely a lot harder than choosing one or the other.

Well, for a few months, the water part is in hiatus and Pandora is safe in a slip waiting to be hauled out for some upgrades and maintenance,  I am spending some time aboard most every day working to get her back in shape for our next trip.    The first order of business is to empty all of the lockers to do a through cleaning.  On the trip we also had some issues with leaking which allowed water to work it’s way into one of the hanging lockers, and other spots.  As you can imagine, in a warm climate that meant that mildew was the result and clothing that smelled musty.  Not good.  It’s going to take time to re-bed fittings and find out where the water is coming in.  I have some ideas but the only way to find out for sure will be to pull down the interior headliner and see where the water is coming in.  That’s going to be a long game of hide and seek.  “Here drippy drippy.  Come out, come out…”

I also had a problem with the maserator pump that empties the aft holding tank.  It sprung a leak and sprayed sewerage all over the cabin and into the bilge.  That was one of the “hard” things about cruising that I was referring to.  As  you can imagine, it’s hard to get THAT smell out of the boat so a lot of cleaning and liberal amounts of bleach will be necessary to fix that problem.  Fingers crossed that it’s enough.

It’s amazing how dusty and dirty a boat gets when it is used month after month.  Pandora will certainly be happier with a complete cleaning.  Brenda too…  Just to be clear, I didn’t mean that Brenda needed a cleaning herself.    Never mind.

Someone told me that to cruise for a year aboard puts as much wear and tear on a boat as ten years of weekend sailing.  I believe it.

Prior to hauling Pandora we went for a last “sail” a short motorboat ride over to Hamburg Cove, on the CT River for Memorial Day just after my arrival.  A number of boats from the Essex Yacht Club rafted up for cocktails.    We joined them and had a great time.  Our son Christopher took a ride up to the top Pandora’s mast and took some great photos.  Mast climbing has been a favorite pastime for Chris for a long time.  Now that he’s in his 20s he hasn’t lost interest.  It’s a good thing that we have an electric winch now that he’s a lot heavier than when he was eight. 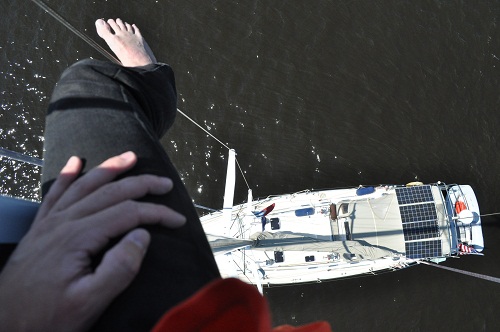 Chris took a lot of photos and stitched this great panorama together.  Pretty talented photographer.  Trust me on this, even if I am his dad.  Dad’s know such things.

The folks from EYC began to arrive.  Pandora wasn’t in the raft up as we  needed to leave early and didn’t want to disrupt things.  However, a bit away from them, Chris was able to take a photo of some of the boats from the club.  Years ago we used to raft up regularly but not any more, or at least not in the areas we have been cruising.  It’s easier to just anchor and dink over to another boat.  Besides, if we get hit by someone’s wake it can cause boats to crash into each other if they are rafted up.   Not a good thing. 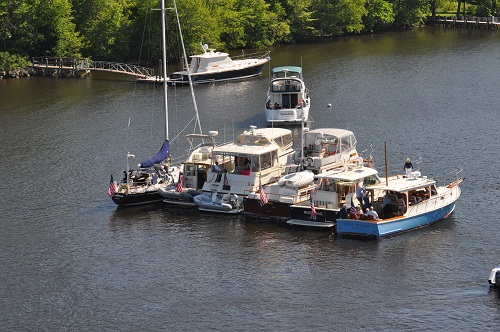 I am told that the blue boat on the end in the upper photo used to be Billy Joel’s.  He has great taste in boats.   She’s a beauty. 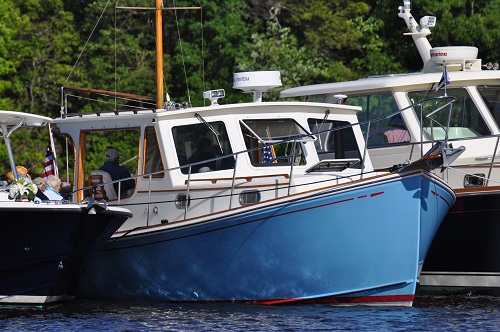 Billy Joel owns a lot of boats and all are really nice.  Interestingly, there was a news segment on the Today Show about him and his boats.  Alas, the blue one wasn’t featured.  It’s worth looking at.  Great boats and a decent guy, it seems.

So back to our Chris, 65′ up in the air at the top of Pandora’s mast with a completely different vantage point up there with the gulls.   It’s not often that you take photos of the tops of flying birds.  Pretty interesting angle.  Bummer though that no bald eagles stopped by while Christopher was at the mast head.  Perhaps next time. 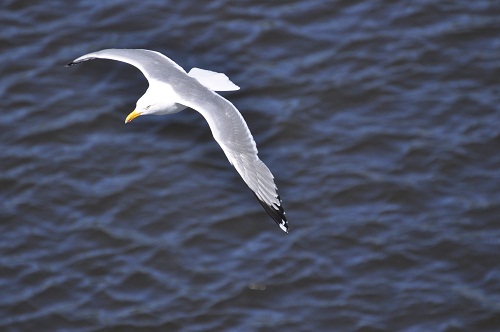 Friends from EYC enjoying the wonderful afternoon.  Say “cheese”.   Looks like fun and it was. 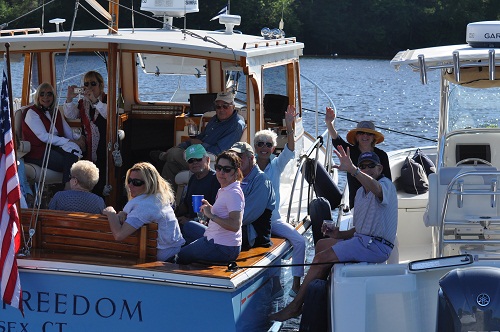 We plan to go to a rendezvous in Watch Hill next weekend but will do so by car.  Our aquatic visits will have to wait till August when Pandora goes back in the water.

Blog posts Bob?  Not to worry, I have loads of material that I can drone on about so I’ll continue to post regularly.  Any suggestions?  Let me know.

One response to “Back in shore mode now. That didn’t take long.”