It’s Sunday morning here in Essex and I feel a real sense of accomplishment for having completed what for me was a major ocean voyage of nearly 1,000 miles back from the Bahamas.

When Brenda and I headed out for our trip south back in early September of last year (boy, does that feel like another lifetime ago) it seemed to me that we were headed to a far away and exotic land, the Bahamas.   Frankly, I didn’t know what to expect but was very excited about what was on the horizon.  Brenda would have described the feeling as anxious but together we headed out into the (sort of) unknown.

So, here we are, back in Essex and it all worked out splendidly.

Our plan all along, was for Brenda to accompany me for the entire trip south and then for me to return, with crew, on Pandora in the spring with her flying back from where ever I was planning to depart.  We have, since getting our first boat, a 20′ Cape Cod catboat, back in 1979 usually had her avoid the really long passages and to join me there after I arrived with crew.  I am told that there are a lot of girls that aren’t as crazy about the long bumpy ocean stuff as most guys are.   Why is that?  The “I’ll meet you there” approach has worked for us for some 40 years of sailing together and on our nearly 15 trips to Maine.

The run back from Marsh Harbor was my longest yet so when I returned to the Essex Yacht Club on Friday evening I was very excited about having successfully completed such a big deal trip.  I have to say that I was just blown away by the reception that I received from Brenda and others at the Club.  My understanding of what was going to happen upon my return is that I would enter the anchorage, take a mooring and join Brenda in the bar for a drink to celebrate my return.   Simple.  Yes?

As it turned out, that wasn’t the half of it.  As I motored up the last mile to the club I called to alert the launch driver that I was coming in and to request a mooring assignment.  I was surprised to hear that they had reserved a spot for me on the dock.   Hmm…

As predicted, the cold front had come through earlier that afternoon and it was blowing like stink and was frankly colder than I was used to after a winter in paradise.  As I was now aboard alone, I wasn’t that keen on going to the dock in 20+ knots of wind.

As I approached the dock I was startled by the crashing boom of a signal cannon going off and there on the club dock was Brenda, her hand on the cannon pull cord and white smoke swirling around her beaming smile.  Okay, now I understood why the dock was a better choice. 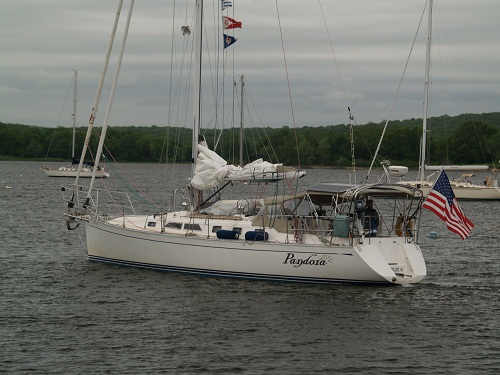 But wait, there’s more.   There, on the dock, were lots of friends and family who had all shown up to give me a proper welcome, including the club Commodore.  I was blown away.

Happily, I was able to retain enough composure to bring Pandora smartly to a stop  at the dock.  They say that a docking is actually a spectator sport and I was not going to give them a thrill.  No bad docking allowed.

My plan was to approach the club and to announce my arrival, I was going to blow the conch horn.  This is a tradition in the Bahamas is to blow the horn at sunset.  All along, it was my plan to announce  my arrival at the club by blowing my conch.  However, I was so overcome with all the excitement I could only manage to blow a pathetic squeak, not the full blast I was hoping for.  Not at all…  So much for grand entrances.

Do I look like a guy who’s happy to be greeted so warmly? 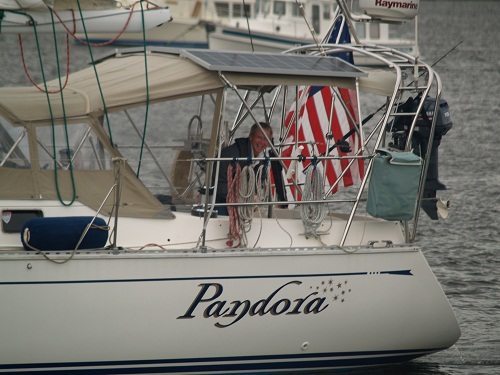 After the staff tied up Pandora I jumped off of the dock and greeted everyone.  What a great reception. 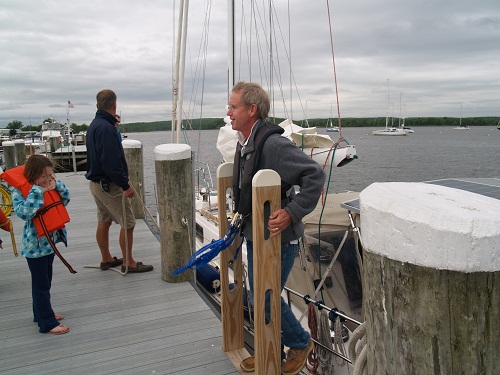 It was very nice to be greeted by our commodore Frank too. 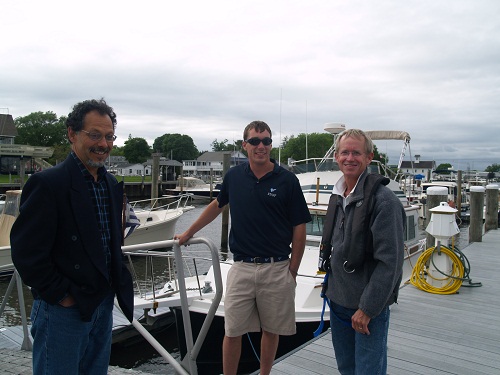 Friday evening is a very busy time at the club with many members coming down for a cocktails and conversation.  As word of my arrival and voyage made it’s way around the room I was greeted by many more folks who wanted to hear about the trip.  It was just so great.

I couldn’t have been more pleased with how things ended up for our “excellent adventure”, from our trip down the ICW, our four months exploring the Bahamas and a great return voyage.   So, how great is that?

Now it’s time to cut the lawn, clean the boat, fix the shower sump, leaking shaft seal, send the prop for repair, strip and paint the bottom, do some touch up painting on the house…

Did I hear someone say “honey-do-list”?

One response to “All’s well that ends well. Pandora back in Essex CT. Yeah!”