Half way home and a FULL measure of excitemen

It’s nearly noon on Tuesday as we enter the 4th day of our voyage from Abaco Bahamas to Essex, CT, aboard Pandora.   I say that we are entering our 4th day as we picked up our anchor in Marsh Harbor at 11:00 on Saturday to begin our 1,000 voyage home and it’s 11:00 now.     Is that a coincidence or what?

As we make our way north, we are keeping an hourly log of lat/lon (position), speed over the ground, wind direction and speed along with other data.    Keeping this location each hour is critical as it will allow us to better understand where are are in the event of a problem, such as our being struck by lightning and loosing all our electronics.  This would be particularly critical if we were to loose our GPS.   Unless we had been logging our Latitude and Longitude regularly, we would have no idea where we were.

Anyway, we keep all those stats in a log book designed for that purpose.  And…each page has 24 lines on it so day one begins when we leave port and the “second day” begins 24 hours later, in this case at 11:00 daily.  Get it?   Bob!!! Quit it with the boring stuff.  What was exciting?

So glad you asked.   In the last 24 hours we enjoyed, or not, the following.

1.       NOT enjoyed…Numerous squalls with strong winds and rain, lots of rain.   And a few of these were in the dark.  The wind was strong and as Pandora surfed down waves , in the dark and rain, I could only imagine what it would be like to be in a real storm.

2.      REALLY NOT enjoyed our hunt for the Gulf Stream.   For hours we meandered in meanders, along the side of the Gulf Stream.    We were given the coordinates for the southern wall of the Gulf Stream but with the light wind and the side of the stream swirling around, we were caught in currents pushing us every where but where we wanted to go.   On top of that, the seas in that area were very confused which meant that the boat was rolling wildly from side to side for much of the day.  Happily, today is a lot better, more like a mill pond.  However, Brenda might not think that “mill pond” is quite the right description.

3.      NOT enjoyed…Wind on the stern that wasn’t quite strong enough to make distance and we really didn’t want to motor.   (At least the wind wasn’t on our nose.)

4.      NOT enjoyed…An uncontrolled jibe.  This means that the main sail slammed from one side of the boat to the other in a big bang.  It happened when a squall hit us with a 100 degree wind shift without warning.  BANG!  A move like this can break the boom or worse.   Not a good thing, especially 200 mile from shore.

5.       NOT enjoyed…When the main sail jibed, it broke the preventer.  This is a line that runs to the end of the boom to slow it down if we jibe.  Well, there was a snap shackle on the end of the line that exploded when the boom slammed over.  What is that about the “weakest link”?   Well, it was fine that the shackle broke as the boom didn’t.

6.      REALLY NOT ENJOYED!!!  Speaking of the boom.  We ALMOST had what would have been a REALLY BIG problem with that too.   Somehow, the nut, on the bolt that holds the boom to the mast came off.  Thankfully, the bolt stayed in place. No simple feat as the nut was on top so the bolt could have just dropped down and out. Had that come off the entire boom would have broken free of the mast, in loads of wind, I might add, which would have been a major problem.    I don’t even want to think about what would have happened.  At the very least, we would have had a major failure of the sail, which would likely have ripped in half.  Beyond that, a 17′ long boom would have been flailing around in a seaway, perhaps acting as a battering ram against the side of the boat.  I don’t want to think about that scenario,even a little bit.  After a bit of jury rigging, we were back in business.  All this for the lack of a single nut.

7.      Enjoyed? YES and NO…The (big one) that got away.  We were fishing and hooked a really large Mahi Mahi.  After something like a 30 minute effort to get the fish the boat the line parted and the fish got away with the hook etc.  To say that we almost boated it, is an understatement as Chris got some scratches on his leg from the fish’s fins as it thrashed around at the stern.  That’s close.  Ian got some great videos of the fight which I am sure he will put on YouTube.  You will have to trust me on this but it was huge, perhaps  4′ long.   Yes, I know, the one that got away.   So, I didn’t enjoy losing the fish.  I sort of enjoyed reeling it in.  But most of all, I WAS SO GLAD not to have to clean a 4′ long bloody fish in the cockpit.   However, all the slime would have been washed out a few hours later by the deluge of rain.

8.   LOVED and enjoyed…  A fabulous sunrise after all of the squalls.  Actually, these clouds off of our stern, lit by the sunrise brought us a whopper of a squall a short while after this shot was taken.  In the foreground was a large swell.  Bummer that it doesn’t show in this photo.  Pretty impressive. 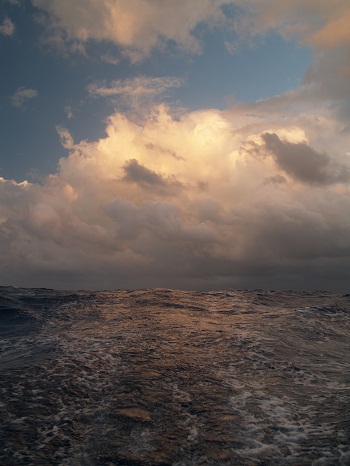 9.      REALLY ENJOYED!!!  A pod of 3 or 4 dolphins visited us for about 15 minutes, swimming all around the bow and darting back and forth across the pressure wave of the bow cutting through the water.   I have seen dolphins do this before but this is the first time I have been able to get decent photos.  Getting a photo of a dolphin took me only 8 months of this trip. They were beautiful. 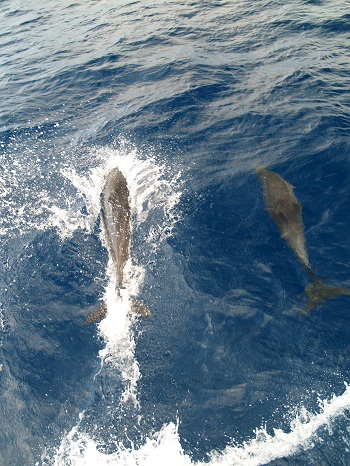 All and all let’s call the last 24 hours “interesting” and “mixed”, some good, some not so good.   Today?  After cleaning up the mess down below and airing out a soggy boat, the sun is out and it’s cool.    Did I mention that we are half way home?   It’s almost time to begin using that often repeated phrase, “are we there yet”.

So, that’s the 24 hour top ten for Pandora for day three.

When do we expect to be home?  That’s hard to say.   If we are able to keep our speed up we should be to New York at some point on Thursday or perhaps in the early hours of Friday. We are not going to come in via Montauk as the strong unfavorable winds will arrive too soon for us to go that way. If we can’t get to New York by Thursday night,we will have to pull in somewhere and wait a few days as there is a front coming through on Friday that will usher in strong northerly winds that will make any further progress north impossible.   So, in an attempt to keep on schedule we fired up the “iron wind” and are under power as there’s not quite enough wind today to move along at a decent pace.

Fortunately, the forecast calls for freshening, and favorable, winds later today or Wednesday.   These winds will likely  end up being too much of a good thing in the next few days.   While they will be from the southwest (good), they will build to the high 20s and low 30s (not so good) in the next day or so.    At least they will be from behind us.

So, half way home, some excitement along the way.   Making progress…  Speaking of making progress, perhaps I should make some lunch.