Down to the home stretch in the Bahamas

It’s Wednesday morning and we are in for a fairly windless but beautiful day.  Today, uncharacteristically, I am happy to have no wind as we plan to move back down to Hope Town as our trip involves passing through a particularly tricky piece of water called Whale Cay Passage.  This short run of only about two miles will take us from inside the Sea of Abaco, the very shallow waters that run up the eastern part of the Abacos, out into the ocean side of Whale Cut Cay and back into the Sea of Abaco a short distance later.  We have to go through this “outside” cut as the waters inside are too shallow for Pandora, even at high tide.

This is an intimidating move because the cut that joins the ocean to the Sea of Abaco is only 20′ deep and is open to the swells of the North Atlantic.   When there is a good sea running, say more than 5′, which isn’t much, the cut can have breaking waves.  As you can imagine, that’s not particularly fun at all.

When we came through this stretch of water last week, it was pretty bumpy but not dangerous.  I understand that there are many times in the winter months that this pass isn’t navigable at all and to make the run would be very risky to small boats.

Even in the most calm weather with little wind and small seas, it’s still distressing to see waves breaking on reefs on either side of the cut, a short distance from the boat.  As the cut is only a few hundred yards wide, it looks like you are heading directly into a surf area as you run through the cut.  The reality is that many boats pass through there and a real problem is rare, especially in the spring when the ocean swells are smaller.  However, passing through any piece of water where there are breaking waves nearby isn’t to be taken lightly.

There is enough anxiety about this cut that there is a local VHF radio net each morning where the conditions at “The Whale” are discussed.  Unfortunately, where we are now, we are too far away from those who manage the net to hear them on the radio.

Today, with very light winds and seas of under 5′, this should be quite an easy run.  With the weather forecast calling for strong thunderstorms later today we’d like to get back to Hope Town as soon as we can.  Unfortunately, we will have to wait till around noon to leave Green Turtle Cay as the tide is not high enough till mid day for us to make it out of the harbor.

These clouds are pretty well developed so early in the morning so they do seem to suggest some drama later in the afternoon.   At least the salt will be washed off of Pandora’s decks. 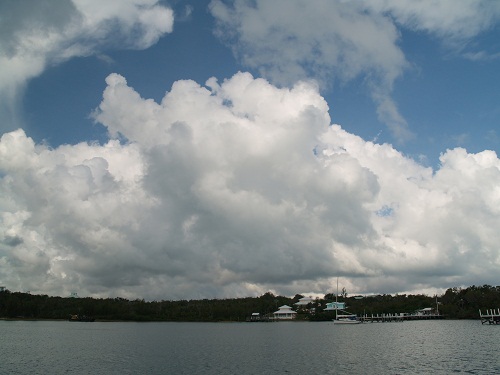 This is the view out in front of Pandora.  More developing thunderheads in this direction too. 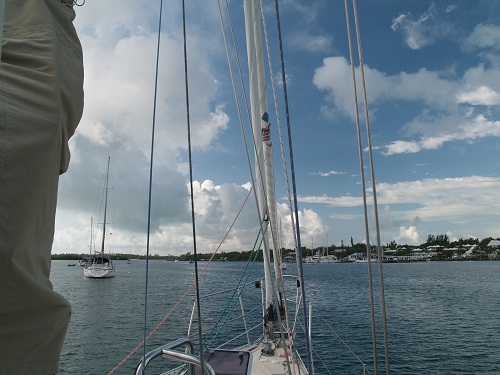 I expect that we way be racing a squall with the hope of getting back to Hope Town in time to get settled prior to more “interesting” weather.

With just over a week till Brenda heads out, we plan to take it easy in Hope Town and will probably eat out a few more times and spend time hanging out at the marina there that has a great pool that’s open to all, even if you aren’t staying in their facility.  Unlike this place, most marinas don’t let “non-tenants” use their facility.  I think that this is a mistake as sitting around a pool tends to lead to us ordering food and drink.  I’ll bet that’s what others would do too.

With so little time left of our first visit to the Bahamas I find myself reflecting on how the trip has been.  It was interesting last evening when we had two women, Diane and Jan of Nora over for dinner.  We had just met them earlier in the day when they stopped by Pandora to introduce themselves.   They seemed so nice we invited them for dinner.

They told us that they had just purchased their boat Nora, a Passport 40, a few years ago and were just getting their feet wet with their first cruise to the Bahamas.  It seems that Diane had grown up on boats but sailing was a new thing for Jan so this was their “shakedown” year of cruising.  Because of this they decided to pick the Abacos, a relatively easy cruising area.

Jan asked us which areas we had enjoyed the most in the Bahamas and, once again, I found myself thinking about what I liked and what I was less enchanted with.

I still have to say that I liked the Exumas and other more southerly islands the best as they still seemed more “real” to me.  Here in the Abacos, the distances are short, there are fewer islands, and it’s just a smaller and more built up place.  Don’t get me wrong, it’s very nice here, but it seems more like the US and less like the Bahamas.  Heck, they even take credit cards, easy, but not “real”.  Cash is “real”.  Forget the fact that there are precious few banks to get cash.   However, that’s another story.

To me, a big part of the Bahamas experience is sailing and as the areas here are so short, between islands, there isn’t much sailing, beyond a few hours here and there.  It’s hard for me to sit still so being here for a month in such a compact area has made me a bit restless.  I am also a bit concerned that, when my crew arrives later this month, that the weather will not be good to head north.

While I can motor up the coast for three or four days with the fuel I have on board, I’d certainly prefer to sail.  Having said that, my crew will not have all the time in the world to hang around waiting for the perfect weather window, so we may very well have to leave because of time constraints.    Having said that, the ocean can get pretty nasty so we will still have to be very mindful of what’s out there and plan our trip accordingly.  They say that the most dangerous piece of equipment on a boat is a clock.  Better to wait till good weather and to leave because of time constraints.

In thinking about the weather for heading north, I have been listening to Chris Parker, the weather router, each morning and am now looking at grib files each day to see what the winds between the Bahamas and Cape Hatteras are like.  Of course, what’s out there now is likely to have little bearing on what we will experience in a few weeks but at least I can become familiar with broad weather patterns on the eastern seaboard of the US this time of year.

We have enjoyed our time here in Green Turtle Cay.   Just for fun, here’s shots of two barracuda that we spied at one of the marinas when we went ashore a few days ago.  This one was about 5′ long.  He was just sitting there waiting for something tasty to cruise by, I guess. 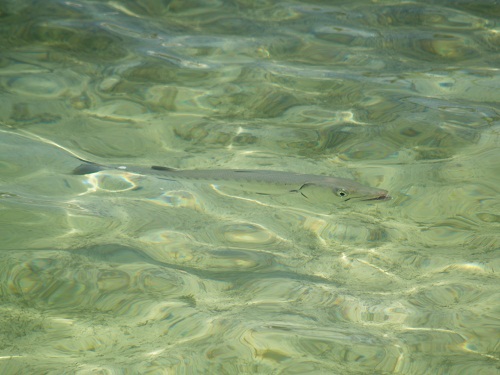 This guy was only about 3′ long but I was able to get a better picture as the angle was better.  These fish look pretty fierce with big canine teeth sticking out of their lower jaws. 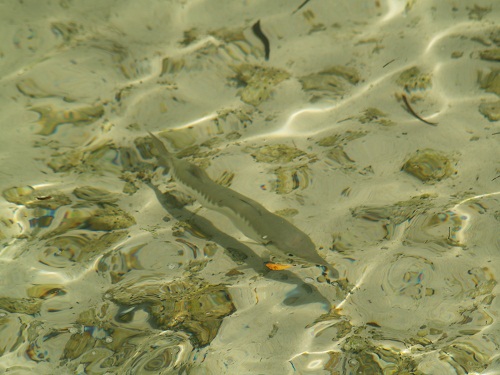 If we are lucky with the weather on our trip north we could have some of the best sailing of the season as we make our way north toward Essex.  I am hopeful that the nearly 1,000 mile run will be one to remember, in a good way.

Just for fun, here’s a link to a webcam from one of the marinas near where we are anchored in Green Turtle Cay.  If we are still here when you click on this link, Pandora is to the far right, the one with the double head stays.