The Hope Town light. They hated it then, they love it now.

One of the most iconic images of the Bahamas is the candy striped lighthouse here in Hope Town, a lighthouse that is very much a part of the island and culture here.  It seems that the love of the lighthouse wasn’t always the case in it’s early days.

The early residents of Hope Town were transplanted loyalists who escaped the newly formed United States following the revolution.  Their goal was to bring to this little Bahamas Island the life that they left behind in the States.  They planned to transplant their agrarian lifestyle, complete with slaves, from the life that they had left behind in a country that no longer wished to be connected with their British homeland.

However, there was one important problem that they seemed to overlook in their goal to begin anew and that was the availability of the water to grow crops.  Oops…  It seems that this island, as is the case with so many here in the Bahamas, lacked a good source of fresh water.  Alas, growing crops wasn’t going to work for them.

So, what’s a loyalist to do?  Here’s an idea, let’s salvage wrecked ships…  As luck would have it, not for ships but great for the island residents, the reefs just offshore, on the Atlantic side, were particularly nasty and claimed many ships each year.  It seems that poorly marked reefs were as much a part of the Bahamas back then as they are today.

The reefs were not so great for the ships and their crews, but a great opportunity for the new residents of Hope Town.  Here’s an idea for a business plan… Let’s rescue the crews and passengers of those foundering ships?   Oh yeah, and we’ll keep the cargo and salvageable portions of the ships to compensate us for our troubles.  On top of that, we can take the wood from the ships, build new ships, and sell them too.

So, fast forward to a time when there was a move to put up lighthouses, to warn unsuspecting mariners, along some of the particularly nasty areas of the Bahamas.   What do you think that the residents of this island said to the idea of a lighthouse to warn ships that they were straying into dangerous waters?  You guessed it.  NIMBY! (If you’ve been living under a linguistic rock, it means Not in my back yard.).

The islanders fought tooth and nail to keep this lighthouse from being constructed, even going so far as denying the construction workers access to fresh water to make concrete.  Keeping a lighthouse, designed to save lives is a particularly interesting way to keep the local economy healthy, for sure and probably not an unexpected response from folks who kept slaves.

After years of wrangling, the lighthouse was eventually built and today it is one of the most beloved symbols of this still fiercely independent island community.

While the Bahamian government has let most of the lights and markers fall into disrepair in these waters, the Hope Town light not only operates each evening, but it is still powered by kerosene and it’s original cable and weight mechanism that has kept the light rotating since the mid 1800s.

The once maligned and now beloved light is kept operating by a group of volunteers that have done a wonderful job of keeping a Bahamas icon in top shape when every other light has been converted to electric operation, if it operates at all.  This is what Wickipedia has to say about Hope Town and this remarkable landmark.

Hope Town   “Hope Town features one of the last operational kerosene-fueled lighthouses in the world. This lighthouse was built in 1862 and became operational two years later,[1] it is striped horizontally red and white. Its light can be seen from 23 nmi (43 km) away.[2]

The Hope Town Lighthouse is one of only three Manual Lighthouses left in the World. It has a spring mechanism that has to be hand cranked every several hours to maintain the sequence of five white flashes every 15 seconds. The lamp burns kerosene oil with a wick and mantle. The light is then focused as it passes through the optics of a first order Fresnel lens[1] which floats on a bed of mercury.”

The light stands like a candy striped sentinel over the harbor.  It’s the tallest thing in the area, higher than even the BATELCO cell tower.  This view, from town, shows just how big this light is relative to the low islands of the Bahamas. 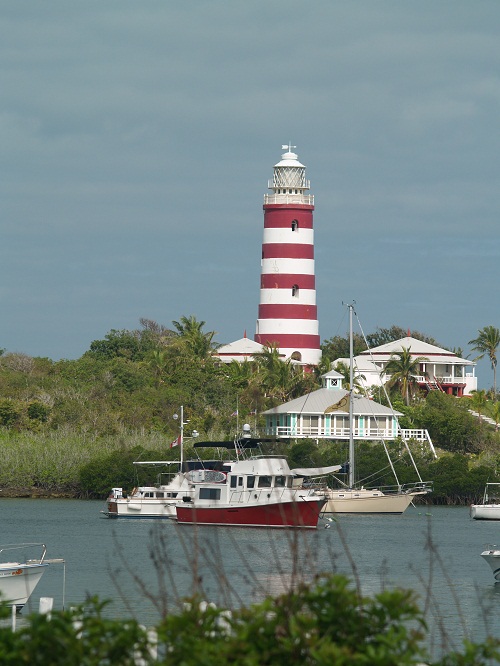 The grounds, while a little scruffy, are well kept. 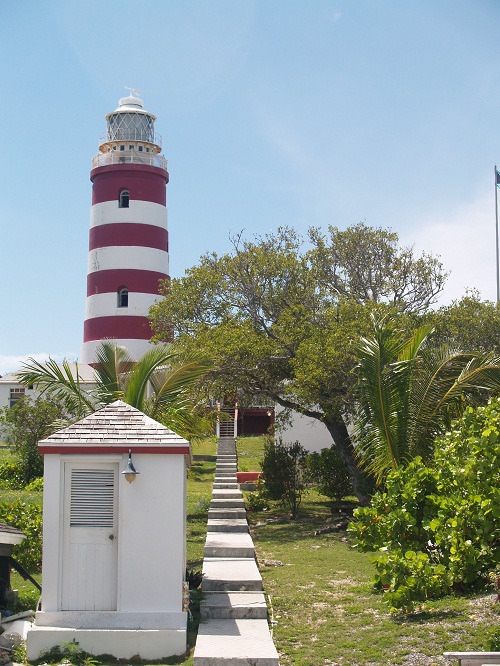 There is a wonderful spiral staircase with some 200 steps.  Brenda loved that feature the best, as you can imagine.  Can you say dizzy?  Wait, is that rust I see? Are those stairs safe to stand on… 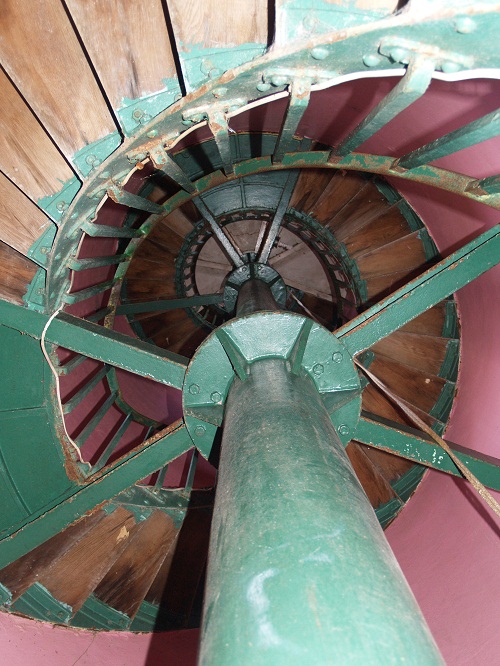 At the bottom of the staircase there are a number of five gallon jugs of kerosene waiting to be carried up the 200 steps to power the light.  I’ll bet that the keepers are in great cardio shape after feeding this light night after night.  The kerosene is pressurized in these chambers to keep the light burning. 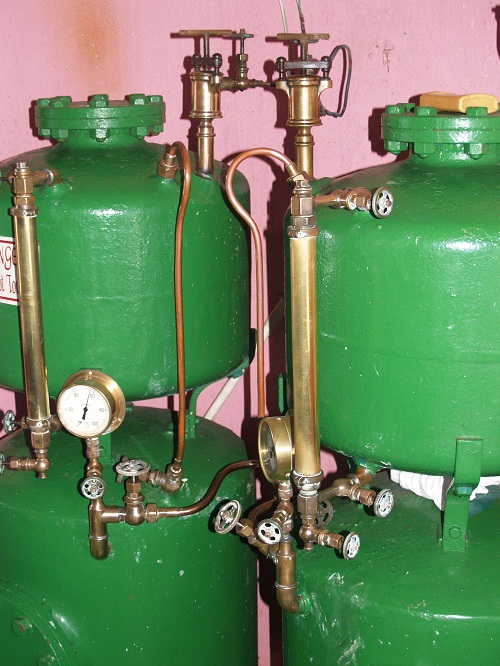 Pop quiz…  What is the operating pressure needed to keep the light burning? 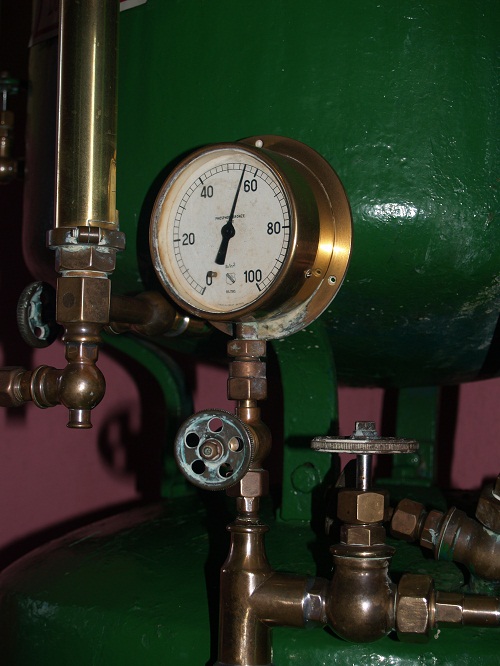 The gears that make the light turn are really wonderful.  It’s hard to believe that this mechanism has been cranking steadily since 1864.  Perhaps it’s their liberal use of the ever handy “3-in-one” oil.  Can’t anyone pick up after themselves? 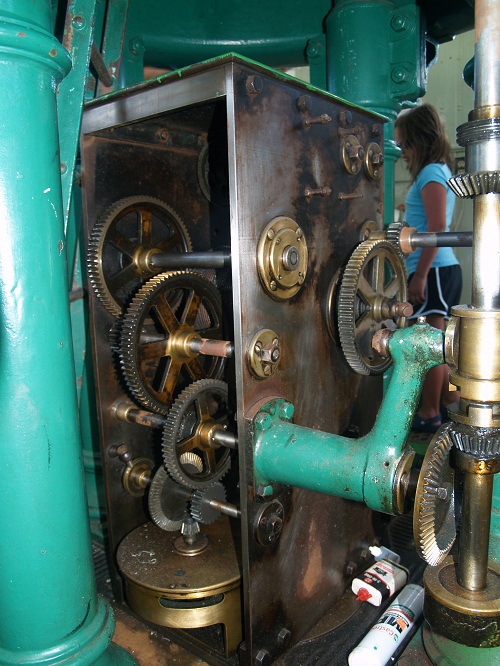 The views from the top are spectacular.  Can you pick out Pandora down below? 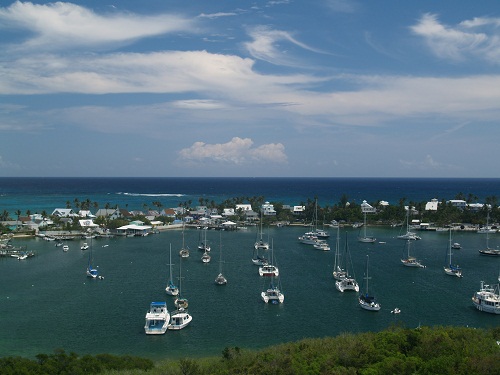 For the more “mature” readers…  Yes Mom and Dad, that’s you.  Here’s a, sort of, close up of Pandora. 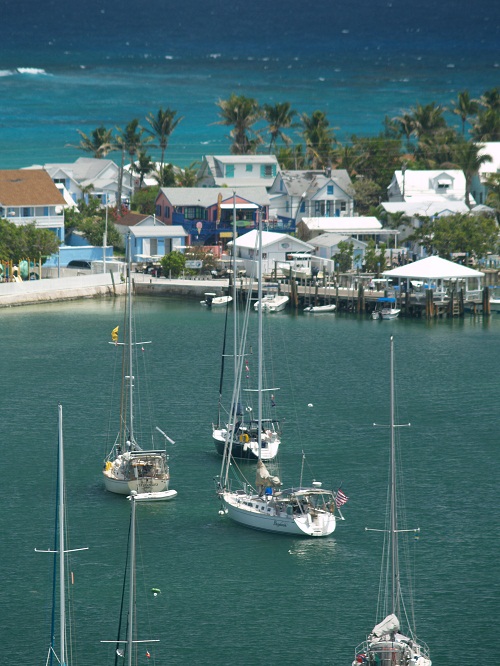 As you descend that wonderful spiral, there are a number of windows with great storm shutters and fabulous views.  Can you imagine what it would be like to stand in front of this window when a hurricane is blasting through town?  Good thing that the wall thickness is measured in feet instead of inches. 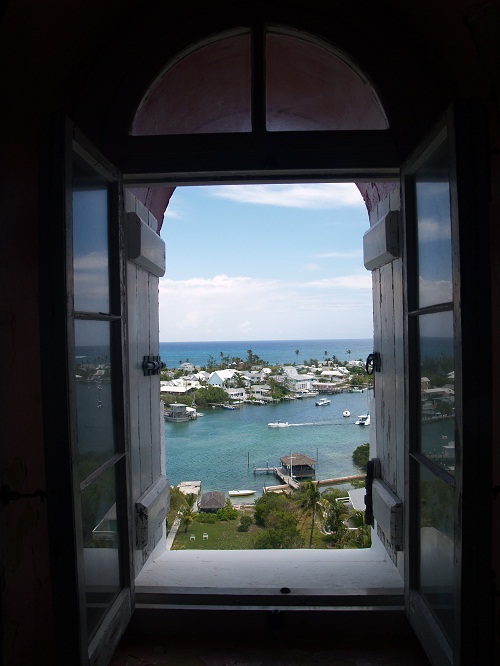 It’s clear that the residents of Hope Town will continue to fight to keep this lovely landmark operating with as much enthusiasm as their fore bearers fought to keep the tower from being built.  That’s a good thing.