Getting into the Abaco groove and a blue hole

After a few days in Little Harbor, we moved up island a bit to Marsh Harbor.   Marsh Harbor is the third largest city in the Bahamas and a good provisioning spot for anyone planning to cruise the northern Bahamas.  It’s been an alarmingly long time since we have had access to laundry and  a proper grocery and we are anxious to have clean sheets and some fresh food.

And, provisioning has been on our mind so far and with less than 24 hours in the harbor we have already visited the grocery twice.   Can you say avocados     Don’t ask what they cost…

The evening before last we had rain for the third time since arriving in the Bahamas in mid January.  It rained hard and for several hours.  The dink filled up with some 6” of water and the boat was very well rinsed.   Everything had gotten pretty salty over the last few weeks since the last rain so we were happy to have a rinse-off.

As you may recall, prior to our arriving in Marsh Harbor, we spent a few days in Little Harbor.  While we were there we went for a walk and visited a small blue hole that someone had told us about.  A blue hole is a salt water pond where the water has worn away the limestone rock and connected the hole to the ocean through an underground cave which might be a mile or more away.    As a result, as the tides rise and fall, the water in the blue hole rises and drops too.  These holes can be miles from the ocean and yet have a connection so that fish can swim from one end to the other.    One of the blue holes in George Town is reputed to be over 5 miles long from the “hole” to it’s ocean source.

In this case, the hole was very small and came up in the middle of the island over a mile from the ocean, assuming that the cave from hole to ocean was in a straight line, which it might not be.   The water in this hole was perfectly clear and just chock full of reef fish and some varieties that I had not seen prior to this spot. 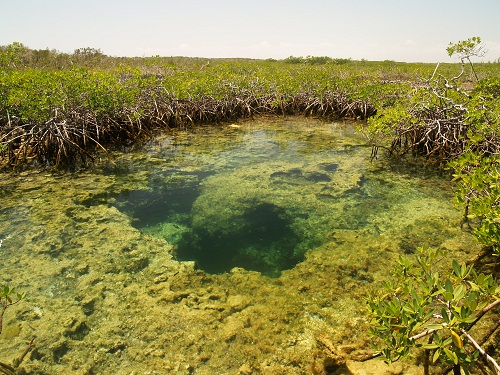 Some of the folks that we has spoken to had taken fins and mask and had gone for a dip in the “pool”.  It hardly looks big enough to swim around in, though.

The vegetation in the Abacos, while still pretty desert like, was much more lush than in the Exumas and areas south of there.   I expect that it’s greener here as there are so many more cold fronts with squalls and rain showers hitting this area in the winter than further south.  These cacti were pretty impressive specimens. 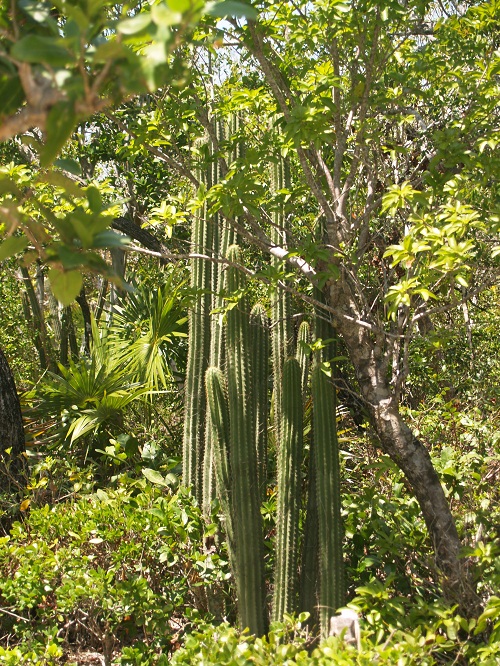 Bromeliads (related to pineapple but grow on other plants and not in the ground) are fairly abundant too and quite large.  This one was about 2’ tall.   We also saw some native orchids,  but none were in bloom.  I think that they were encyclia. 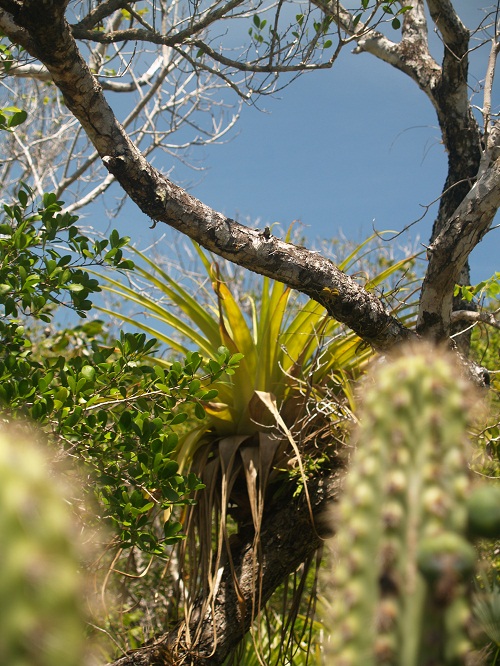 On our way back to the harbor we passed this very nicely painted home.  It seems that bright colors carry the day here.   Colorful buildings are the norm here.  Even the government offices are brightly painted, usually pink.   I like it. 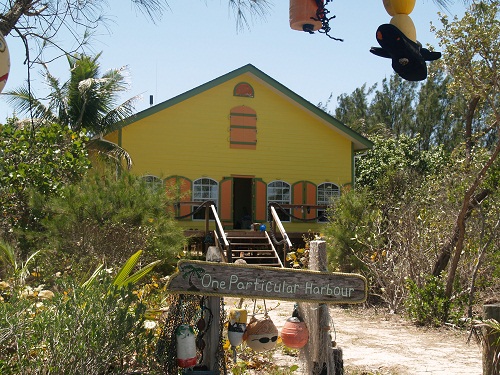 So, after two days in Little Harbor we made our way out of the channel, which is only three feet deep at low tide, and sailed north to Marsh Harbor.  The run was about 15 miles and quite circuitous given the many sandbars and shallow shoals that we had to go around to make the run.  I was very glad to have a self tending jib so that jibing around each way point and shoal was less of a production.  By the time we made it to within sight of Marsh Harbor the wind had piped up to over 20kts ahead of a squall which made for a spirited sail.

Last night we will have a couple over for cocktails to share stories and to hear what their first winter in the Bahamas was like.  They were from Rochester NY so I am sure that the temperatures here was a welcome change from winters at home.

Today we did laundry!!!  Clean sheets!!!  I tried to get a haircut, my first one in several months.  No luck…  Hopefully tomorrow morning.