>Guy’s weekend on the CT and Mystic Rivers

>Last weekend my son Rob spent some time on Pandora with two friends. We headed out in spite of a miserable weather forecast. It was really not looking too good with a better than 50% chance of rain each day. And it was raining cats and dogs as we drove into Mystic. However, as this trip involved one of my doc friends, Joe, flying in from Pittsburgh and the threat of having to reschedule for late September we took a chance and forged ahead.

The plan was to meet in Mystic CT on Thursday night after work. However, the forecast was for 100% rain followed by a 50% chance for the next few days. Yes, it was just pouring when we arrived in the early evening. As it was just too wet to get on board Pandora without getting soaked we opted for rooms at the lovely Day’s Inn Mystic. Actually, it was actually very nice and not expensive at all.
Joe and his son Luke arrived late due to delayed fights and trains but we all made it and were ready for our weekend out on the water.
I wanted to head over to Matituck Long Island and some winery visits but the idea of doing this in the rain just didn’t appeal. Instead we opted to head from Mystic to the CT River and up to Selden Creek, one of my son Rob’s favorite places anywhere. Rob had grown up visiting this place and he wanted to go in Pandora.
When I think about a 50% chance of rain I tend to think that it’s only about half likely to rain and even more likely, half no rain. Well, as luck would have it, at 10am on Friday morning the rain began to stop and we headed out to board Pandora. The rain actually held off and conveniently only came down at night. No problem there.
A short while later we headed down the river and out toward the western end of Fisher’s Island. In spite of (or more likely because of) a forecast of SE winds about 10-15kts, we entered the Sound against West winds of the same speed. Why is it that the weather guys are always wrong? This meant a beat against a 2kt tide and a headwind. Well, it was only about 15-18 miles to the River mouth, we were on. What a great sail it was. 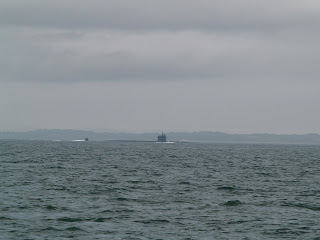 Now, here’s something that you don’t see every day. A nuclear sub leaving New London. Wish we were closer. I’ll bet that they wouldn’t have felt the same way.
We reached the mouth of the river just as the tide was turning to give us a nudge up the river to Selden Creek.
About 8 miles up the river, Selden Creek is so narrow you can’t believe that the water is deep enough for a boat on the scale of Pandora. I kid you not when I say that the total width isn’t much more than 75-100′ from bank to bank. Fortunately, it’s quite deep with about 10′ of water all the way so after a three point turn going bank to bank, we set the hook. 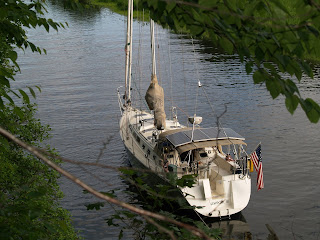 The only way to anchor there is to set the main anchor off the bow and back toward a cliff on the shore that has a convenient ring cemented into the face. This way you can tuck along the bank and yet still be in water deep enough to stay out of trouble. Here’s a few great shots of where we were. What a great place.
All snug with an anchor and stern line tied to the cliff. 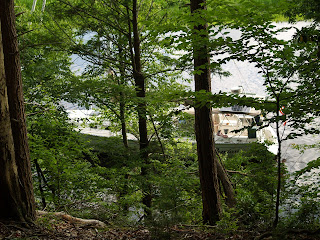 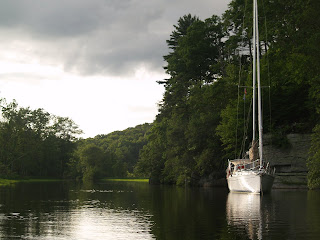 Now, here’s something that you don’t see every day, a mast in the trees. And yes, the trees were really that close. 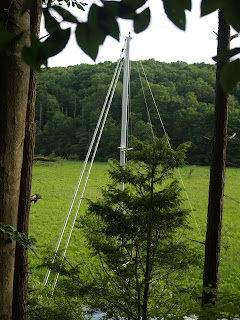 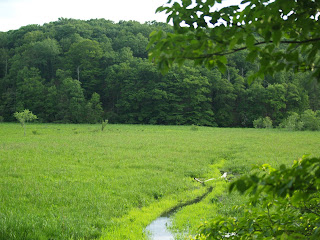 Imagine this view of the marsh after dark. The entire surface carpeted with thousands (millions?) of lightning bugs. It was just amazing. We ate dinner in the cockpit and watched the scene unfold as it became dark. It was easily the most magical scene I had ever seen. Bummer that I couldn’t get a shot of it. 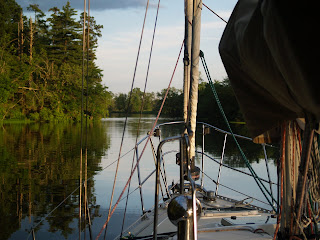 The view early the next morning without a breath of a breeze. Just amazing. Hard to believe that we were so close to salt water.
The forecast for Sunday included Gale Warnings so we headed back to Mystic to the mooring and a final dinner of local lobster.
In spite of the weather forecast we only saw rain in the evenings so I guess that the glass was indeed half full.
Brenda and I plan on boarding Pandora again later this week for a week of vacation over the 4th of July. We expect to take in the Wooden Boat Show at Mystic Seaport, a Corinthians rendezvous at Watch Hill and then we will be off to Block Island, Newport and ultimately to Wickford Rhode Island.
More to come and I can’t wait. The weather seems to be improving with a promising forecast for the weekend.
Wish us luck.
This entry was posted in Uncategorized. Bookmark the permalink.