Recovering on the morning after

It’s hard to believe that the boys have come and gone.   After so many months of anticipation of Rob and Chris visiting with Kandice, the week is over and they have flown home.

This morning the alarm went off at 05:15 so that they could catch the cab to the airport at 06:00 and head to Nassau and their connecting flight to the states.  They planned to spend an extra day in Nassau and used some of their travel points to get a suite at the local Hilton.  I’ll bet that they will enjoy taking long showers.  It’s been a month since I have had the luxury of unending hot water for showering.  How nice that would be.

I have to say that having the “kids” with us for the last week was perhaps the best visit we have ever had with them.  Everyone got along well and I even kept myself out of trouble, mostly.   We were on the move constantly so I find myself a bit winded today but missing the constant activity as well.  While it’s nice to have things aboard Pandora back in order from the chaos of five adults sharing such a small space, I had to choke back my emotion this morning as I hugged each of them goodbye.  Funny, but the cab driver must have sensed my emotion as she said “don’t worry Dad, I’ll take good care of them” prior to motoring off into the dark.
Happily, the weather cooperated fully over the last week with moderate winds most of the time.  We had worried about strong winds getting in the way of fun but that didn’t happen.  Actually, while it was dead calm last night, today a cold front is coming through so by Sunday morning we will have winds perhaps in excess of 30kts.  That’s a lot of wind and I shudder at the thought of what it would have been like if we had to get them to shore in those conditions at o-dark-thirty this morning.

While we anchored near town last night we came back to the secluded anchorage a few miles from town where we had spent some time with the kids again today.  With the several days of strong winds forecasted, we wanted to be sure that we are protected from all directions.  If we are going to be boat-bound for several days, I want to be sure that we aren’t bouncing all around from wind and seas.  However, it seems that we are not the only ones to have thought of this idea as there has been a steady stream of boats coming into the harbor since yesterday afternoon. When we first arrived earlier in the week, we were nearly alone and now there must be two dozen boats here.  Happily, there is a large sandbar nearby cutting through the middle of the harbor, so the boats are quite spread out.   We’ll see if we anchored too close to the bar when the wind shifts direction as it clocks around in the next two days.    If so, we’ll find ourselves on the sand at low tide for a bit.  Fingers crossed.   The spot that I really wanted is now occupied by another boat took it the moment we pulled anchor yesterday.   Happily, there was another spot nearby, sort of, where we are anchored now.

As I mentioned in my last post, I used my Hawaiian Sling, a sort of spear, to catch my first fish the other day.  Rob and I went out and were able to spear two lion fish.  This species isn’t native to the western hemisphere as they are from  South-East Asia but are prized as a fish for home aquariums.  It seems that a shipment of these fish were released into the wild off of Florida, by mistake or on purpose, some years ago and have taken over much of the Bahamas and Caribbean.  This is very unfortunate as they are voracious eaters and are making a mess of the native reef fish population.  The good news is that they are very easy to spear and while their spines are venomous they are very good eating.  The two that Rob and I caught were a bit less than a foot long.

They look quite dramatic, that’s for sure.   Good thing that they are such good eating as that should make some progress in keeping the population in check.  With all those big fins, they don’t swim very fast, unlike most of the fish on the reefs.   Being very careful not to be stung by the fins while cleaning them,  I gutted them and prepared them for cooking.  Then I pan-fried up the filets with breadcrumbs and herbs.  They were terrific.  Brenda hasn’t quite come around to eating something that looks quite that aggressive as of yet.  However, I expect that she will end coming around if I am able to make a tempting enough dish.  Wish me luck.
Does this look like something you’d like to eat?  Looks can be deceiving though.   Trust me on that. 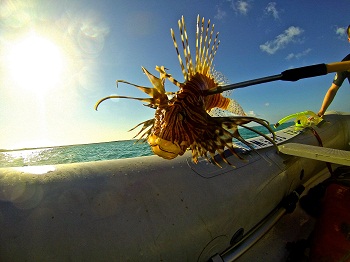 We were all fascinated by the conch salads and remaining shells.   Blowing the conch shells at sunset is very popular here and everyone went home with a shell to show off once they learn how to blow one.  You cut off the smallest whorl at the top of the shell and blow into it like a trumpet.  It makes a very satisfying low tone.   That’s of course, if you know how to do it.  Me, I am still learning but am determined to master it, or at least get as proficient as a little middle aged guy from New England can be.  Here’s Rob giving it a try. 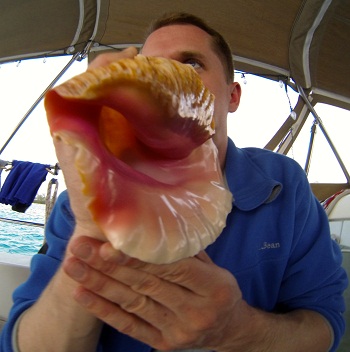 The wind is picking up according to Chris Parker’s forecast so I expect that it’s going to be a wild night.  Glad that we are in a secure harbor.

So, now Brenda and I will have to readjust to being alone and continue on our journey.  Perhaps I’ll have a rum punch tonight.   It will remind me of this great moment as we headed off to a beach cocktail party a few days ago, punch in hand. 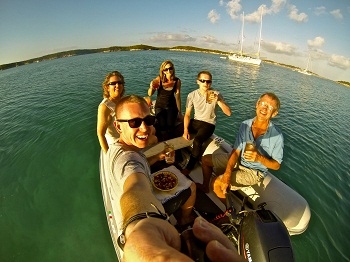