First of all, I have been remiss in doing a post since the gang arrived on Saturday as we have been so busy running around, cooking, lugging fresh water for showers and trying to keep some semblance of order on a boat with five aboard.  It’s funny, but you can actually spend time in a space that’s about the size of a large bathroom with five people and somehow adjust to the limited space.  Having said that,  when everyone is jumping into the water, coming back aboard all salty only to jump in again it does seem like keeping the boat somewhat salt free is a loosing battle.   And, there is plenty of rubble everywhere out in the cockpit and on deck.  I am happy to say that in spite of my anal need for cleanliness, I haven’t been too much of a jerk at all about all of this.  Brenda, I believe, would corroborate this as well.

So, on Saturday evening, as the snow was falling in the US, our boys Rob and Chris along with Rob’s girlfriend Kandice arrived for a week aboard.  Believe it or not, they actually arrived an hour early.  How great is that?

It is so great to have them here to enjoy our time in George Town, we can hardly stand it.   It’s Tuesday evening and I thought that I would finish up on my post prior to heading to dreamland.  Today was a fun if long day with a trip ashore for lunch and  a bit of provisioning.  I also purchased a new outboard motor for the dink.  “A new outboard you say?  Do tell as I thought that you already had one Bob.”  Well, yes, (sheepish admission) I do have an 8hp, one that came with Pandora.  However… well… it can hardly get up on a with two of us aboard and with the boys… well, that just won’t do.   As my dad has always said, “you can prove nearly any decision is a good one if you work at it hard enough”.  Yes, yes, that works for me so this is indeed a GOOD DECISION.  Besides, I have wanted one for, as my youngest once said ” I have wanted this for my WHOLE life”.  Indeed.   I should also mention that in spite of everything being so expensive here, outboards are exempt from duty so they are actually very reasonable.  Actually, you can’t even purchase a two stroke outboard in the US any more due to environmental regulations so everyone I know that wants a new one has to come here to make the purchase.  So, they sell plenty of them here and the 15hp Yamaha is the model of choice.

So now I will have a 15hp brand spanking new Yamaha outboard, the gold standard here in George Town.  If you don’t have one, well, you just…don’t have one.  Now, I have to find a way to get rid of the old 8hp one.  There is a morning radio net here where you can offer items you no longer need for “sale” so it will be interesting to see what happens when I mention that it’s available.  While 8hp wasn’t enough power for me, there are plenty of folks that have that size or one that has even less power.   I expect that I will get a taker pretty quickly having already gotten one offer from someone at the town dock prior to my even getting back to the boat with new engine and cast off 8hp.    Happily, with the 15hp, there is plenty of power to zip around and hold my head high.  Ok, ok, enough of the self congratulations about this stupid outboard, how has it been going since the kids arrived?

It’s been great.  We have done walks on the beach, hand fed some giant, 4′ stingrays, snorkeled on some reefs and have been having the best time together.   Meals have been terrific as Rob and Kandice brought two coolers of frozen food from home.  Good meat is tough to get in the islands and it’s very expensive to boot.   We have have been pigging out on the great steaks that they brought with them.  How about shrimp and NY strip steaks?  Hmm…    Oh yeah, the local rum punch is terrific too.  Along with pineapple juice you mix in a bit of orange juice and a splash of grenadine plus a good amount of dark rum and coconut rum.  You have to try coconut rum.  It’s really good stuff.   And, rum is another thing that’s pretty cheap here, much less than in the states.

They arrived via the harbor water taxi on Saturday evening just at sunset.   Brenda was so excited that I thought she was going to jump overboard as the taxi pulled up along side. 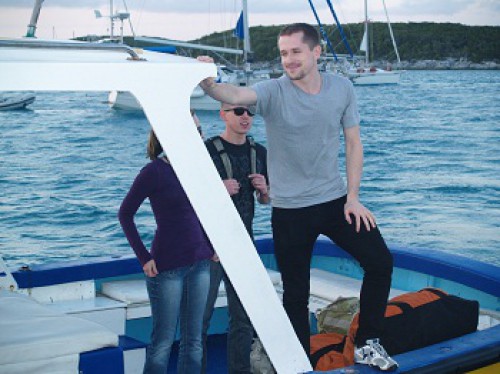 We went for a hike up to the top of monument hill yesterday. Always one to stage a photo shoot, the three of them mugged off for the camera. 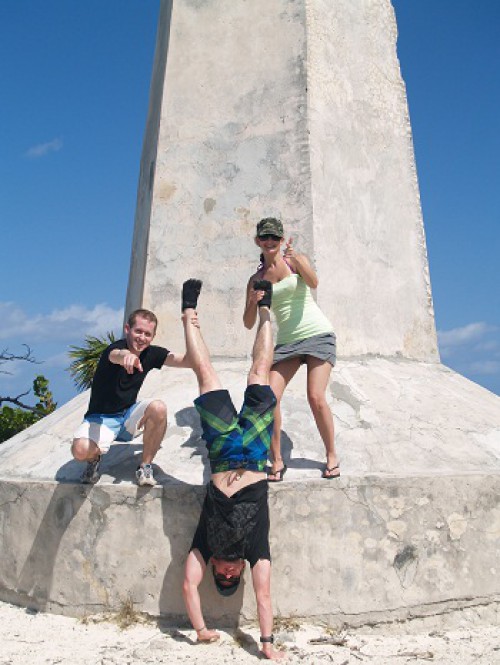 But, that wasn’t enough of a show.  How about this for a shot.   Happily, no bruises. 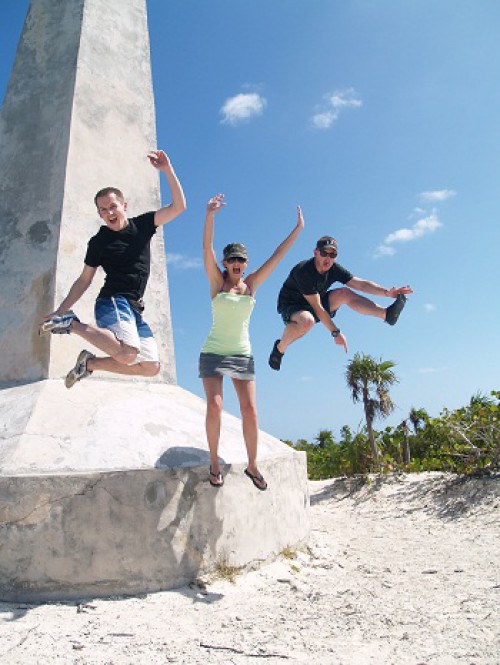 When Rob and Chris were little guys, I used to pull them behind the dink.  How about a redo now that they are all grown up.  They will always be the “boys” to us.  Some things never change.   So, what’s that thing poking up on Rob’s back you ask?   It’s a video camera on a rig that he put together to get unusual shots.   I expect that some of the videos will end up on YouTube.  Stay tuned for that as lots of time has gone into shooting video. 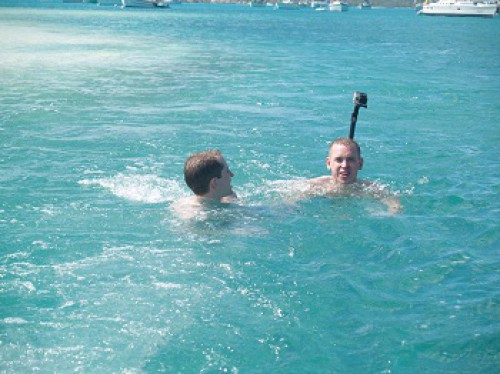 We had a few great hikes to the beach too.  The color of the ocean was spectacular. 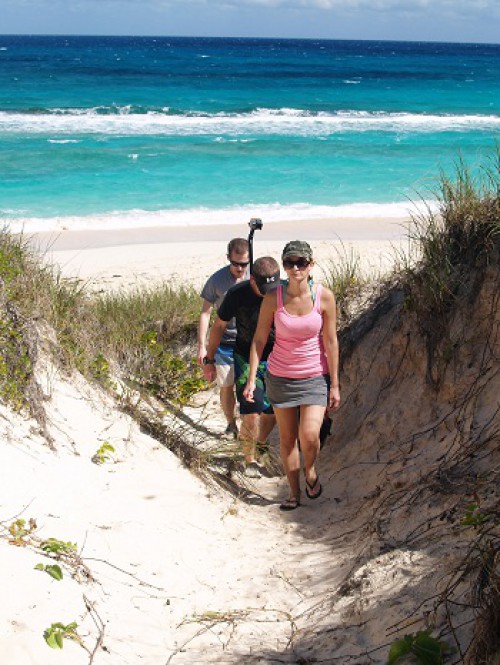 It is just so great having them here. 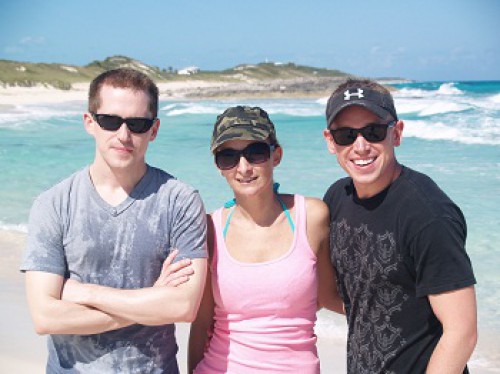 Into every life a little rain must fall but in the Bahamas the emphasis is on the “little” as there is way more sun than rain.  However, yesterday was a bit out of the ordinary with a waterspout followed by a number of impressive squalls and plenty of heavy if very brief rain.   This impressive scene was gone as quickly as it began. 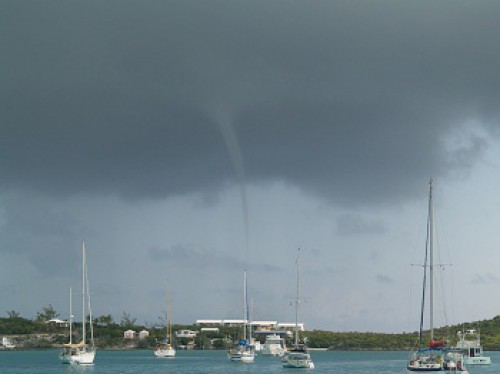 Tomorrow we will be moving a few miles to be closer to some great snorkeling spots.  Happily, the weather is going to be very calm so the heavy winds we have had will be in remission for a few days.  I can’t believe how fast the week is going.     Brenda in particular, is going to be in heavy duty withdrawal when the kids leave.    Me too.

2 responses to “The “kids” arrived, finally!”