I didn’t know what clear water really was. Wow!!!

Imagine being able to see 100′ in the water…  Me, I thought that I understood what that would be like.  I WAS WRONG…

On Monday we left the Nassau area to head over to the northern Exumas to begin our run down to George Town over the next few weeks.  Our first stop was Allen’s Key, home of it’s very own native iguana population.  This place is just amazing with water that is so clear that you can’t believe it.  I went snorkeling both Monday and Tuesday and enjoyed great visibility on the small reefs that ring the harbor. I tried my first hand with underwater photography and it was lots of fun.  However, I am still not sure that I have my SSB set up properly to send larger files.

My first try with underwater photgraphy. There were plenty of fish to look at.  I like the butterfly fish a lot. 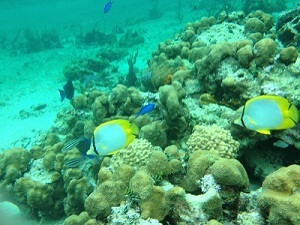 Brenda went swimming with a friend and spent an hour in the water, it was such a perfect temperature for her.  Toward the end of her swim a really large, perhaps 4′ across, ray passed her by.  I have to say that she was a very big girl about this and continued to tread water.  She didn’t even scream at all.  She was only a little anxious but I expect that her heart rate went up a bit as she had heard that they were gentle creatures, even if they are HUGE! The ray passed on and all was ok again.

To say the water is clear doesn’t begin to make the point.  “So Bob, how clear is it?”  Well, it’s so clear that when it’s calm you can’t see where the anchor chain enters the water, it just goes down from the air into the water and to the bottom where you see the anchor in the snow white sand.  A friend described the sensation as though the boat was floating in air.  I’d say that about sums it up.  It’s a completely new experience for us.

Today we are in Norman’s Key and will be waiting out the strong winds which kicked up into the 20-25kt range overnight and are expected to stay in that range for the rest of the day.

The signature attraction of Allen’s Cay, the Iguanas, are just so much fun.  These creatures, and they look like miniature, but not small, dinosaurs, are just amazing. There is a beach where they hang out waiting for the cruisers to come in and feed them. 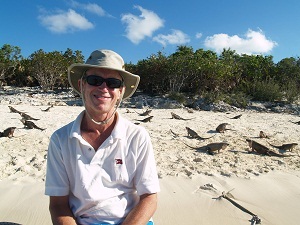 I know that we are not supposed to feed them but watching them compete for a piece of cabbage is just too much fun.  One will grab it and others try to snatch if from them.  Sometimes a single scrap will pass hands, no make that mouths, three of four times. It sort of reminds me of work back in my last life.  You just bring your dink up to the beach that has dozens of 3-4′ long lizards milling around and toss them vegetables.  They are so aggressive I wouldn’t recommend trying to have them snatch the food from your hand.

Hopefully I will soon be somewhere with WIFI so I can post some photos to go along with these posts.

5 responses to “I didn’t know what clear water really was. Wow!!!”