>We had our first week of the season on Pandora beginning last Friday when we went from Norwalk Yacht Club out to Mattituck LI. We have visited this small harbor a number of times over the years and decided that we would make this our first stop of the summer. The channel is a long way in and winds past homes, boat yards and osprey nests. It’s very pretty. 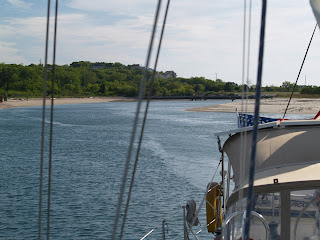 While we were there the weather was great. We even walked out of town about 2 miles to visit a vineyard. Shinn Vineyards a great little vineyard on the North Fork of Long Island. We took a tour given by Barbara Shinn who is really passionate about her farm which she keeps in a way that goes way beyond organic. Her current push is to get approval for a large wind generator on the property that will power the vineyard and tasting room. What a great place. Check out this view. 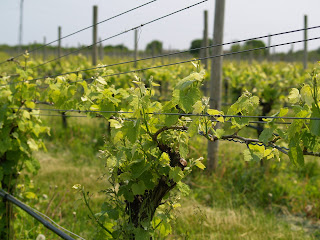 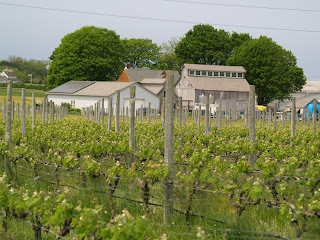 After that we went further out and spent a few days in Sag Harbor. What a contrast with all the big yachts. I counted a dozen over 100′. What recession? SAG isn’t very friendly if you don’t have $$$ to through around. Moorings are charged by the foot at $2/ft, something that we have not run into anywhere else. They are doing an excellent job of keeping their moorings open and unocupied with that policy. Odd as you’d think that they would want to attract more dollars from the “little people” too. 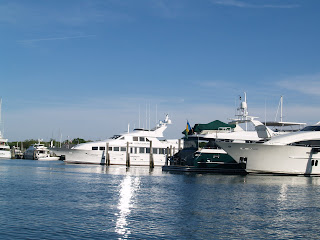 Since leaving SAG on Tuesday we have seen nothing but rain and cool weather. It’s Friday morning and we have been on the dock in Greenport checking out the town. It’s really a very nice town with lots of historic homes. Very nice. We even found a marina that would give us a free (almost) spot to tie up for two days. There wasn’t another boat around due to the weather and the fact that it’s still early in the season.
Very different than SAG Harbor, I would say. 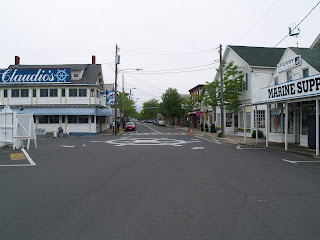 The main street in town isn’t exactly hopping. We were told that Memorial Day Weekend was very busy. You can’t tell here. Also, Claudio seems to own much of the town businesses and is said to be the oldest family owned restaurant in the US. We ate there the first night because of the really cheap doc space. It was the least that we could do. 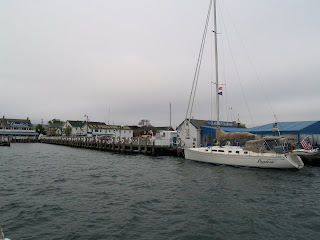 Hard to imagine a marina with only one boat. Yes, it was just us.
Well, have to sign off now as we are headed over to the CT River for a visit with some friends tonight in Essex.
This entry was posted in Uncategorized. Bookmark the permalink.