A few years ago Brenda and I were in Antigua and learned about a rowing race across the Atlantic, 3,000 miles, the Talisker Whisky Atlantic Challenge.  That’s twice as far as the Salty Dawg Rally run from Hampton VA to Antigua and to make matters worse, they have to row the entire way in an open boat.

The idea of purposely heading out into the ocean in an open boat for a month or more sounds nuts.  For me, the 9-12 day run from VA to Antigua in the relative comfort of Pandora is not all that appealing but I do it because I want to spend a winter in the Caribbean.

The crews that make their run do it for the experience, not to enjoy time here as I expect that after being in Antigua for a short time, they fly home and back to work.

For me, the run to Antigua is a big deal and not all that comfortable.  However, rowing across the Atlantic? Now that is an entire different kettle of fish.

It seems that several dozen boats do this every year and some crews do it more than once, perhaps as many as ten times for some, I am told.  And every crew has a specific goal beyond successfully completing the trip, a charity or something to raise money for.

Here’s one of the boats that made the trip.  All of them are very similar in design with one, two three or four crew.  This one, had a crew of three. 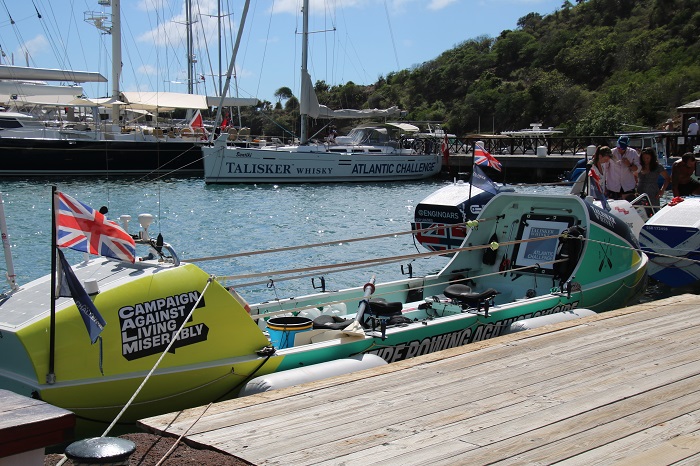 Their goal is clearly stated on the aft portion of the hull. 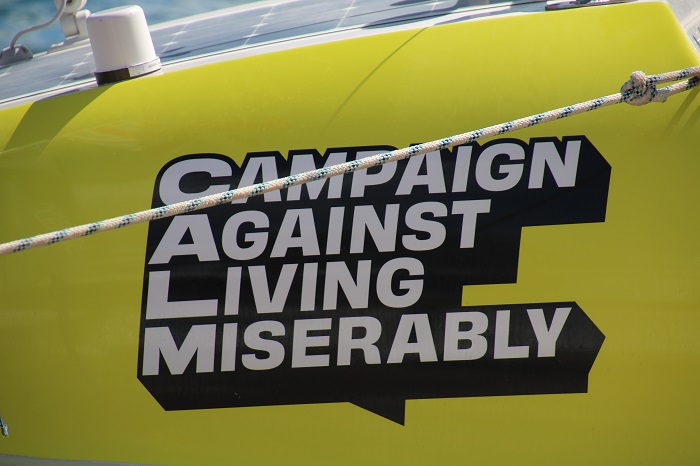 When I think about what being at sea for a month in an open boat doing nothing but sleeping and rowing, day after day, I guess that they were truly living their goal.   Misery!  Or should I say, “misery loves company” and they lived that, all together for a month.

And they can’t say that they did it for the cuisine.   This is a lovely sample of food that they enjoyed on passage. 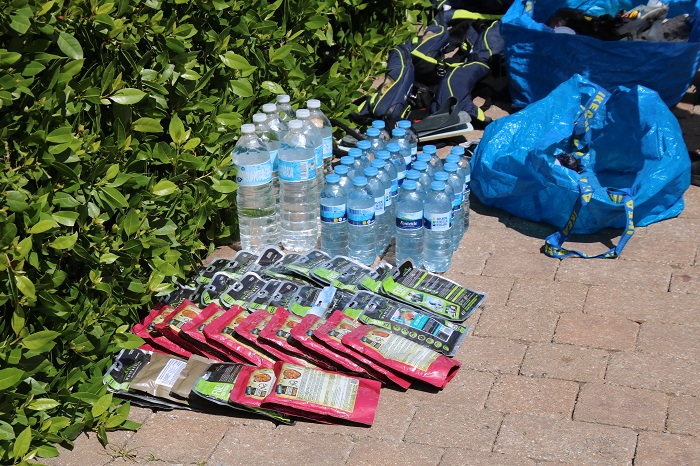 I also saw bags of vacuum packed stuff that looked like oatmeal.   Every item brought aboard has to be accounted for at the end of the trip and a race official audits the items as they are removed to ensure that every single items that they took aboard is accounted for and noting was tossed over the side. 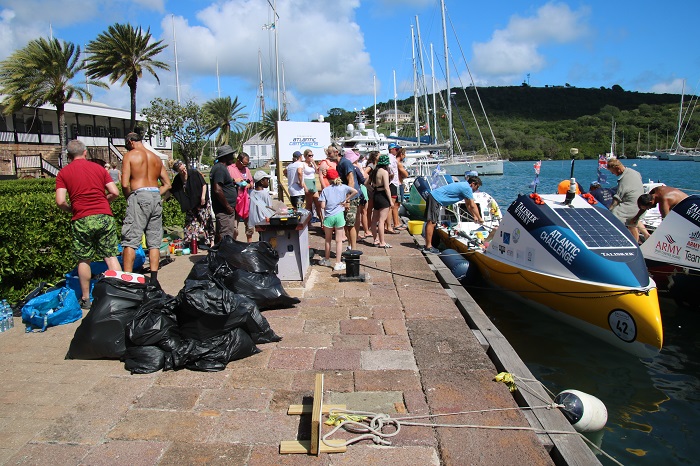 The race officials are very serious about all this and monitor the boats for any perceived infraction.   I  had heard about a women’s team a few years ago that thought it would be fun to hold up a sheet as a sail and make a video of what they must have thought was a moment of hilarity.

The committee saw the clip and disqualified them on the spot.  I’ll bet that they had fun explaining this to their supporters.

Like the boats in the Salty Dawg Rally, each boat in the race has a tracker on board so that folks on shore can follow along.   This is a screen shot of the fleet. 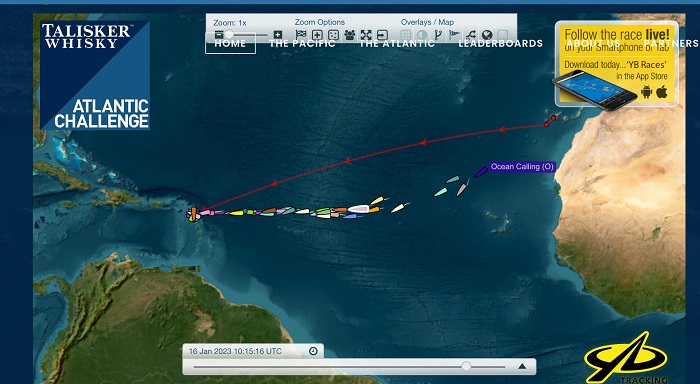 A few days ago I decided to go over to English Harbor to welcome one of the boats that was arriving.  There were hundreds on hand to welcome the crew including perhaps 20 or so that were wearing matching shirts.  It was fun to see the boat as they entered the harbor, serenaded by the horns of the big yachts and accompanied by a number of dinks that were happy to greet them too. 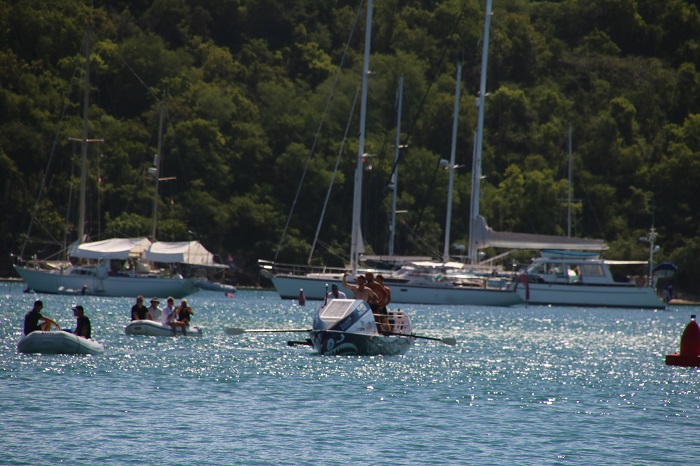 These guys, all members of the Scots Guard or military, were clearly pretty excited to be nearing land.  I was told that one of them played the bagpipe but I didn’t see or hear that. 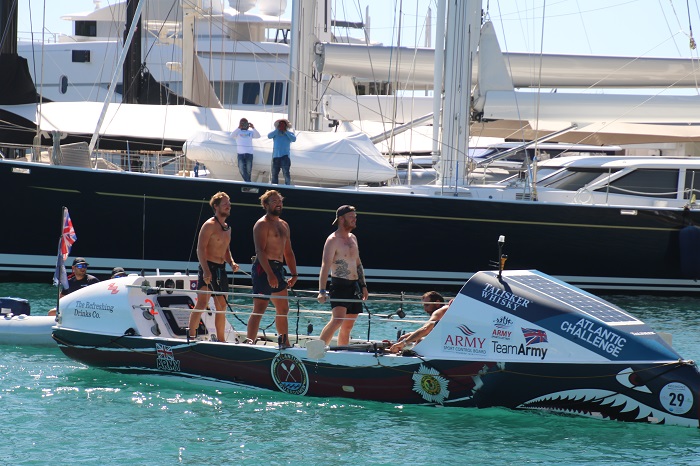 Ashore was all done up with banners and such. 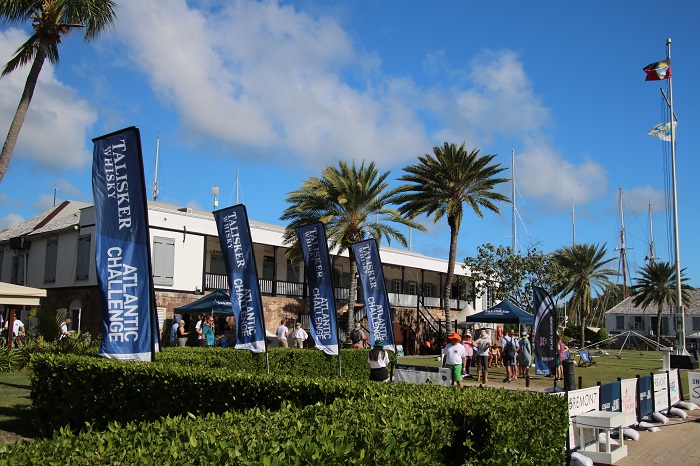 While I was standing around waiting for the boat to appear, I heard someone call my name.  It was Ann-Marie Martin leaning out of her office window, obviously also excited about the arrival of the boat.  She’s the Park’s Commissioner who I have come to know over the years of bringing the SDSA fleet to Antigua. 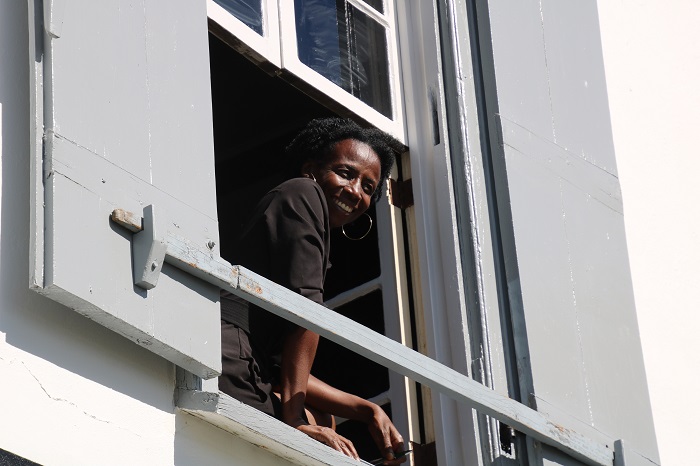 As each of the crew stepped ashore, after more than a month at sea, emotions ran high.  It was moving to see them greeted by family after so long apart. 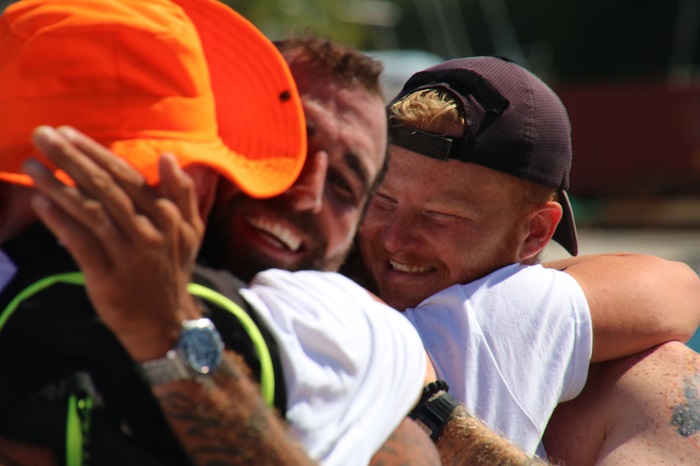 There was plenty of enthusiasm for the UK and Scotland in evidence. 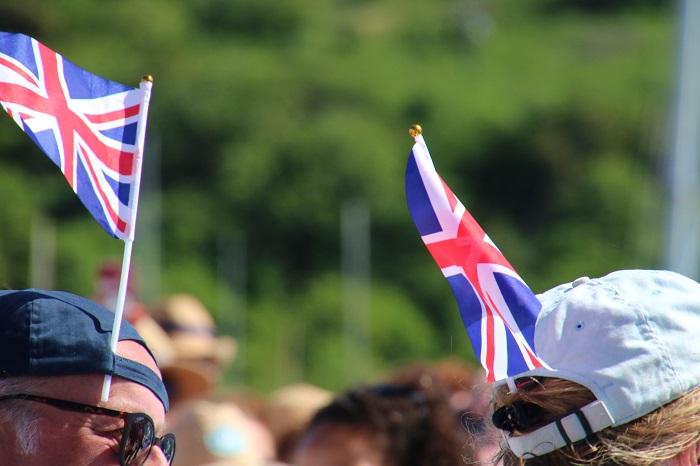 Next on the agenda was a sit down interview and when that was over, a meal of cheeseburgers and beer.  I’ll bet that it was a welcome change from oatmeal and freeze dried food. 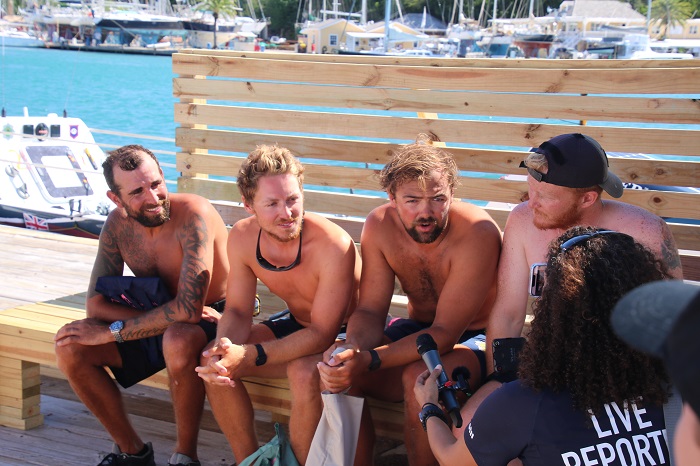 Their accomplishment was really something, rowing across the Atlantic but it didn’t take long for them to announce that “the Atlantic Guardsman were formally retiring from ocean rowing”.  That makes sense to me.  For them, been there, done that.  If you’re curious about this team and want to learn more, follow this link.

When asked about a memorable moment on the trip, one shared the experience of looking up at the stars on a clear night.  Another, recounted when the boat was rolled completely over, tossing all of them overboard.   Yes, that sounds memorable if not in a good way.  I’ll take the Milky Way above being tossed into the drink.

And if you are part of the “I want to cross the Atlantic because it’s there” group, follow this link to learn more about the Talisker Whisky Atlantic Challenge.

And, I expect that the crew of the Atlantic Guardsman would have something to say about that other team’s campaign against living miserably.

Finally, tomorrow we head to the other side of Antigua to provision in Jolly Harbor with our friends Mark and Lynn on Roxy and then on to Guadeloupe in a few days.

Perhaps I’ll close with a shot of the rainbow that we enjoyed this morning following a brief shower. 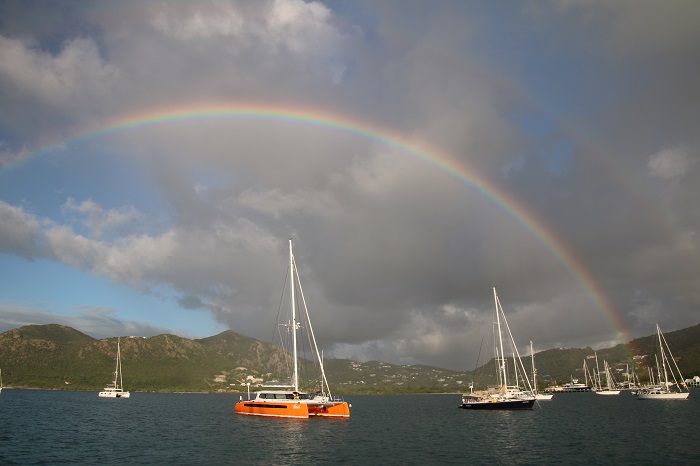 Another beautiful day in paradise.   Nope, no rowing in my future.  Well, at least unless my dink motor fails.

One response to “Campaign against living miserably.”