Broadband for Pandora! What’s next?

Recently, I have been thinking about all the changes that have come to the cruising community in the decades Brenda and I began sailing together.

It wasn’t all that long ago, for those of a “certain age,” that electronics onboard were mostly limited to a few cabin lights and a VHF.   Forget navigation equipment beyond perhaps Loran or an RDF, and if you were a “real” cruiser, you found your way around using a sextant.

Just a few years back the Iridium Go was the hottest new thing and in this year’s rally, nearly every boat in the fleet had one.  The Predict Wind maps and routing software, were a game changer and great addition to Chris Parker’s forecasts when on passage.  However, the GO service, at $135/month is limited to downloading weather information and sending email.  And, it is terribly slow at that.

In the months leading up to the departure of this year’s rally, I learned that a few boats had installed Starlink but didn’t think much about it.  All that changed for me when one of the Bahamas rally boats called in for a Zoom weather briefing.  They were on passage, 200 miles north of the Bahamas and while the rest of us were using sketchy marina WiFi or cell data to connect, there they were calling in on video, clear as day, with a view of their wake streaming to the horizon.

So, here I am just a few months later and it seems like every other boat around us here in Antigua has Starlink and are enjoying streaming video.

Starlink is a product of Elon Musk’s Space X and just in case you have been living under a rock I expect that you would have at least heard about it through reporting of the war in Ukraine as he sent over a bunch of stations for the Ukrainians to use to stay in touch.

The Starlink service is powered by thousands of satellites in orbit that Space X launched over the last few years and much of the world, including the Caribbean and north America are now blanketed by this service.  There are several versions of the service available, including, residential, RV and marine.   I had assumed that the marine version was what we’d need to use and that’s really expensive, I think about $2,500 for the hardware and $5,000 a month for the service.  That’s not a lot different in cost than the satellite services that have been around for years and there is no way that it would be useful for small cruising boats like Pandora.

The residential unit uses a fixed antenna that you mount on the roof or somewhere with a good view of the sky.  It is fixed and doesn’t move.

The RV version, designed to be used on a moving object like a van or RV that travels from place to place looks about the same as the fixed version but has a built in motor to point the unit toward the best satellites.  That’s the version that cruisers are putting on their boats.  It’s not designed for use on boats and I have no idea how long it will work in the harsh marine environment.  However, at $600 it’s not expensive compared to other things for a boat and the monthly charge is $135 for something like a terabyte of data at high speed, I think about 100 mb/sec which I believe is faster than our home internet.

A common question that I get when folks are preparing for the rally is “what sort of connectivity is there in the Caribbean?”  The answer was always about a mix of WiFi hotspots and the best options for cellular, island by island.  Starlink changes all that with its low entry price and reasonable monthly charge.

So, after seeing a unit in action here in Antigua on my friend Herb’s boat,  I had to have one.  I ordered it a few weeks ago to be shipped to another Salty Dawg’s home in VT and he carried it down to Antigua, arriving on the island a few days ago.

Yesterday I installed it and while I had to fuss with it for a few hours using the Starlink app on my iPad, I gave up on that, installed the app on my Android Google fi pbone and it worked almost immediately.  Yahoo!

I will say that when it initialized and the antenna moved around to find the best sight to the sky, it was amazing to watch.  Magic!

Here it is, temporarily installed on Pandora’s cabin top.   After I get a feel for it, I will install it more permanently on the radar arch. 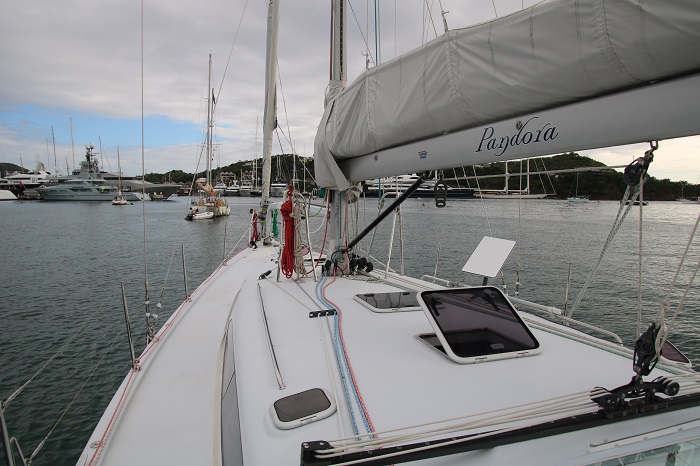 A closeup of the unit.   It’s crazy as when you turn it on, it rotates and automatically points to the optimal source of signal.  As the boat moves around in the very light winds that we have right now, it follows the satellites by rotating to compensate for the boat’s movement. 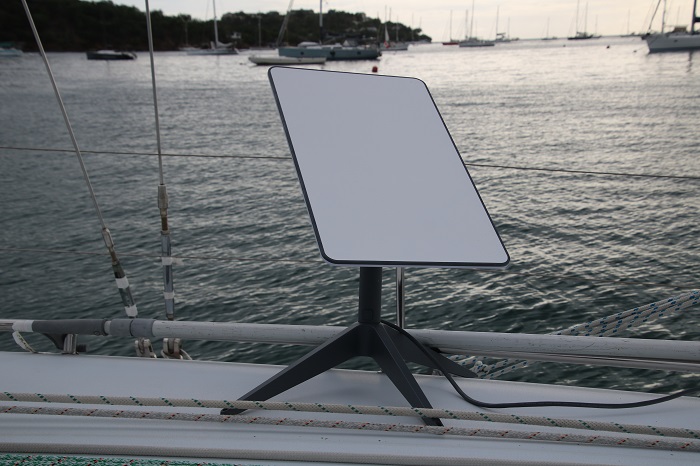 While you turn the unit on it draws a good amount of power but once it settled down and the router is initialized it doesn’t use a ton of power but more than I would want to leave on 24/7 when we aren’t using the unit.

The Starlink website says that the power drain doesn’t seem to be much I’ll know more once the sun goes down and I see what it uses this evening.

This unit should be  game changer for Pandora and having the power to watch movies on Netflix while on the hook will be a remarkable change.  Actually, last night we streamed PBS All Creatures Great and Small and it was amazing.   It wasn’t without a few glitches as Antigua isn’t in a high speed area yet, compared to other islands in the Caribbean but I did a speed check a moment ago and while the speed varied moment to moment, it peaked at about 80MBS, about the same as at home with cable.

The pace of change in every aspect of our lives continues to accelerate and none will have more of an impact on the cruising community than reasonably priced broadband internet.  The need to stay in touch with aging parents, grandchildren or with customers for those who are still working is more critical than ever.

Now that I have seen this amazing service first hand, I just had to get one and now it’s here.

Who know how this will all unfold and if Space X will decide that using the RV unit on small boats thousands of miles from where they shipped the unit, remains to be seen.   However, given all of the boat dollars we burn on Pandora this seems to be a decent risk, even if the service is somehow restricted in the future.

For now, having broadband aboard Pandora!  Who knew?

We’ve come so far and it’s hard to imagine what’s next.

Now, if Pandora could make the run north to CT on her own.  That would be awesome.

One response to “Broadband for Pandora! What’s next?”